Today there was a little surprise on the Xbox Live Marketplace from Rocksmith. Did you see it? Well @PikminGuts92 and a few others did and now they are strumming away to the debut of Avenged Sevenfold’s “Nightmare” on Rocksmith!

The DLC has been taken down by Microsoft earlier today at the request of the developers, but we’ve been informed that “A7X is [definitely] coming to the game soon.” 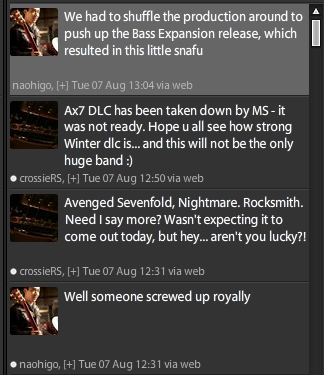 So were you quick enough to grab it? If not, how excited are the @OfficialA7X fans for their Rocksmith debut?

Sixties is one of the best times for rock guitar. It doesn't matter how old you are. If that matters for this music then it'll be forgotten! Trust me they are aiming for timeless guitar music and maybe this fits the bill. This isn't Guitar Hero!

Although I can enjoy 60's music, I like all genres. They gotta think, most of their audience is not going to be be in their 40's+

Avenged Sevenfold? Really?? How about some real music like Metallica. Or atleast give us a Queens of the Stone Age pack, because we have been playing Go With The Flow for so long!

When I think Metal, I think of PanterA. But a Queens of the Stone Age pack would be cool.

I love Avenged, But still the all around hard rock / metal genre is just little to none. They need to bring more inspirational guitar music. You know the songs we love to jam the f*ck out to.

I deleted the Nightmare song by accident now I have to wait for it to be released. Wahhh!

I'm curious if this'll be an A7X pack or just a "Rock Hits" pack.

ok cool thx.. i'm a huge a7x fan and if you could email me that would be sweet.

Tried emailing didt go through. Email me at kreatonx@gmail.com

easy eh? it must not have that insane lead part… kyle if you read this can you please email me at "s_i_t_h_99 AT yahoo.com" thanks!

it does have the insane lead part on combo #1.

Just got done playing the new song. Its pretty good and fun to play. Really easy too.

No definately didn' t mess with that solo. I think I played combo #3. That's the easy one.