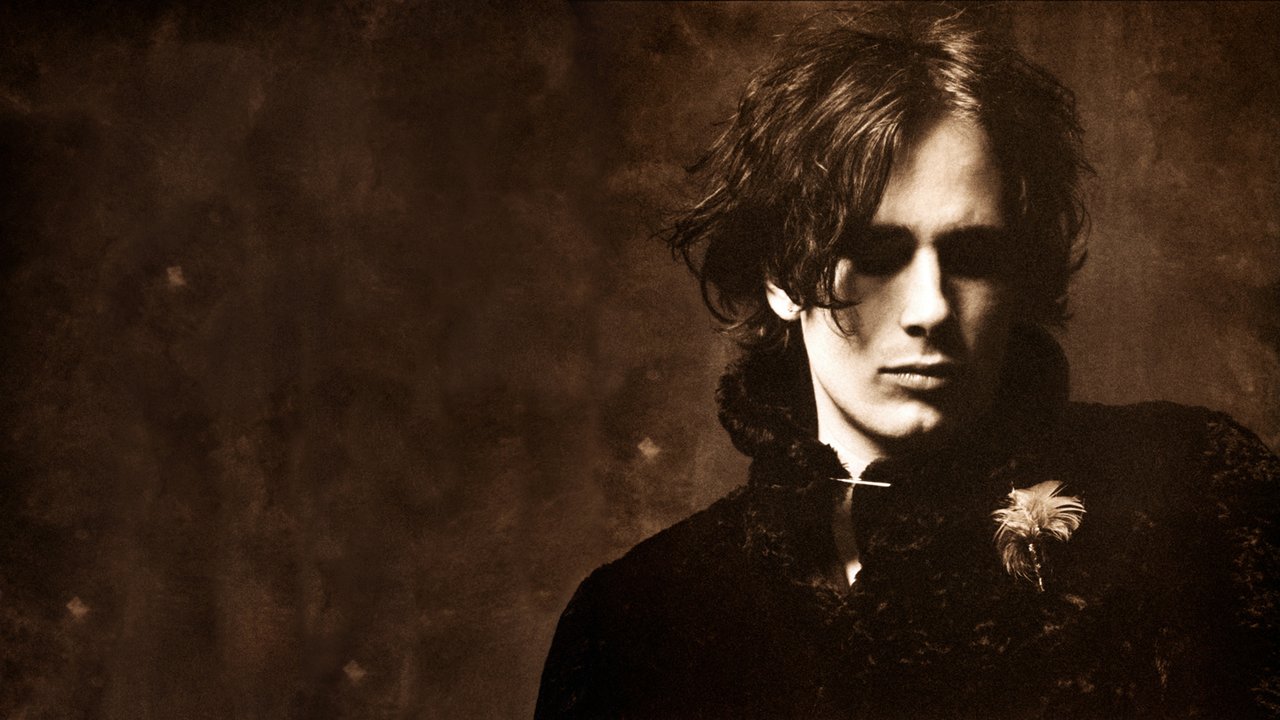 We have confirmation from Dan Amrich!

The latest never before seen artist in a music game to be added to the Rocksmith 2014 library is the late and great Jeff Buckley.

Well, I’m glad you asked. Jeff Buckley was a prolific genre defying song writer with a heavenly voice. Not only did he have an incredible four octave vocal range but he was no slouch on the guitar either.

Jeff Buckley had an ethereal voice and an incredible vocal range. He was a tenor capable of reaching a falsetto* pitch. A tenor’s range in the bass clef spans middle C to high F. Jeff’s actual range was four octaves

Born in Anaheim, California Jeff Buckley (Scott Moorehead) started from humble beginnings by simply covering songs in various Manhattan venues in the East Village in the early 1990s. Gradually working his own original material into these gigs a few major labels began to take notice, yet  Buckley seemed hesitant to sign. In 1994 he signed with Columbia and released what would be his only true studio album 1994’s Grace.

Grace won appreciation from a host of revered musicians and artists, including members of Buckley’s biggest influence, Led Zeppelin.[81] Jimmy Page considered Grace close to being his “favorite album of the decade”.[82] Robert Plant was also complimentary,[83] as was Brad Pitt, saying of Buckley’s work, “There’s an undercurrent to his music, there’s something you can’t pinpoint. Like the best of films, or the best of art, there’s something going on underneath, and there’s a truth there. And I find his stuff absolutely haunting. It just… it’s under my skin.”[84] Others who had influenced Buckley’s music lauded him:[85] Bob Dylan named Buckley “one of the great songwriters of this decade”,[83] and, in an interview with Village Voice, David Bowie named Grace as the one album he would take with him to a desert island.[86] The album eventually went on to feature in Rolling Stone’s 500 Greatest Albums of All Time in 2003, appearing at #303.[87]

While working on his second album (Sketches for My Sweetheart the Drunk) Jeff decided to go for a spontaneous evening swim in Memphis and never returned. They found his body a week later with no sign of drugs or alcohol in his system.

Jeff Buckley’s mark on music remains, with bands such as Radiohead, Coldplay,  Nine Inch Nails and even Protest The Hero citing him as an influence.

Now it’s your turn to experience his music and @UbisoftStudioSF has the distinctive honour of teaching you how to play it through the fastest way to learn guitar, Rocksmith 2014.

How about this amazing fingerpicking cover of the epic Hallelujah by Canadian Poet/Writer/Vocalist Leonard Cohen?

The title track off Grace featuring an incredible riff complete with an equally awesome bass line?

The ethereal journey of Mojo Pin

Or did they go deep and grab Nightmares By The Sea off the unfinished yet impressive second album. You know who else likes this song? Katatonia.

So did you learn a bit about Jeff Buckley?

Good, now hopefully you have become a Buckleyhead and will go purchase Grace and show all your friends, and family how awesome Jeff Buckley was.

… Or you might just buy the DLC next week.

Come back to find out the songs on Monday!

“Man I had this Guy with me once … and we were sittin’ down and talkin’ and jammin’… He played his version of Indifference for me… man I tell ya… I’ ll never forget the way He did it… I was just f***in’ speechless… one of the most memorable moments of my life… I just wish I had seen him more.”

Do you know the pack size yet Elliot?

It’s a three pack. Grace and the Last Goodbye are the other two.

Rufus Wainwright did a better cover, I don’t like the way Buckley did it.

Yeah, on the piano and the guys singing is as stiff as a manequin, youre crazy if you think rufus played a superior version, his voice PALES in comparison to Buckley’s.

Hallelujah is a given, but I’m hoping for Eternal Life as well, just to give the pack a little punch.

So Real would be good too

I remember trying to play Last Goodbye and Grace way back when. I didn’t last long, they were both clearly beyond my skills at the time. I’ve never re-visited them, but I think I’m ready.

So, for me? Instant buy.

Tim Buckley pack next week then…?

Katatonia covered Nightmares by the Sea. Its a pretty interesting interpretation of the song.

I definitely mentioned that in the article 🙂

Sorry, I somehow missed that. 🙂

Let’s have a 5-pack of Jeff, with no covers. Hallelujah has been done better, and it is not the interesting on the guitar. Let’s have some muthaflippin tracks from Grace. Come on!

Hallelujah has been done better? By who, and if you say rufus wainwright then save your time and don’t bother responding.

Man, I want the whole Grace album as DLC. That would be incredible. But hoping for Dream Brother, Grace, Mojo Pin, and Eternal Life at least.

Same here. There’s not a song on there I wouldn’t enjoy playing.

I wouldn’t be upset if Lover You Should’ve Come Over makes it into the pack. I never get sick of hearing that one.

Agreed! What a great song!

Wow, I didn’t know about him. He was really good. Shame about him drowning.

This would have better suited as a single with Hallelujah.

OK, I’ll bite… For what reason do you think Jeff Buckley shouldn’t have a pack?

He had one full length album that was a bit overrated. Sure, his voice can hit more octaves than pretty much anyone but his guitar work wasn’t all that great.

And there isn’t worse guitar work is RS? (I’m looking at you, punk bands)

I’m trying to find the “awesome bass line” referenced below one of the videos posted. Maybe it’s my laptop, but I’m not hearing it. This doesn’t seem like it’s going to be in the least bit appealing to bass players, but I’ll wait for the charts.

Blast from the past moment: His mother caused quite a stir back in the 90s on eBay when she went on a rampage on eBay getting auctions pulled that referenced her son. It got the point that regular sellers began putting his name randomly in auctions that had nothing to do with him just to see if they would get pulled. They did. It was a really crazy time. I remember it well because I was an active member of an auction community in which several of the regular members were targeted.

Last Goodbye has a sweet bassline!

The Grace video has extremely awesome bass lines! I never heard this guy but I’m blown away and excited for this DLC especially for the bass tracks. Listen to Grace again at the 4min mark.

I need to clarify; I didn’t listen to the 1st Grace video, I listened to the Live version (last video). The live version has the killer bass solos so I’m hoping (but I know it will not happen) for the live version.

This sentence is false

Great! Now i can slash off another one in my list of artists that will probably never appear in Dlc!
Now i’m waiting for Joy division and if Jimmy changes his mind a little bit more, Led zeppelin.

Ciaran Dunne
Reply to  This sentence is false

Let us all pray for Jimmy to have a change of heart , much like Jimi Hendrix’s estate before christmas, A twelve pack of zeppelin ( If you are going to dream , dream big )

Woo this is his music game debut! I’ll certainly buy this.

I was kind of hoping secretly that the letters in the clue would’ve spelled out Buckley Bros and we would’ve gotten a pack from Every Time I Die (fronted by Keith Buckley, his brother, Jordan, is one of the guitarists).

Man that would’ve pissed off everybody.

I was thinking the same thing. Would love to play some ETID.

wow! I never listened to him before (apart from his version of ‘Hallelujah’), and I am blown away by these pieces. I’m buying this pack if it has any of these in it. And now I need to go and order some CD’s….

Wonderful. Hopefully this is a sign of Ubisoft focusing their efforts on critical successes, even if their popularity has waned in recent times (or never really reached astronomical levels in the first place).

Wishbone Ash should be next up.

never heard of him but if plant & page like him i’ll give it a listen.

Will wait for charts.

This is awesome! I love some attention paid to a great artist that maybe didn’t reach mega-platinum status. Will definitely buy.

“Grace” is an incredible album and one that everyone should listen to at least once, if not own.

That being said, I’m not all that excited about this as DLC. Great to listen to, but doesn’t sound very interesting to play, imo.

For such an intense puzzle, this is kind of a let down. Eh, the puzzle has been fun though for Dan and all of us, so all good 🙂

“Great to listen to, but doesn’t sound very interesting to play, imo.”

Couldn’t disagree more. I think Buckley’s guitar style is distinct and his chord voicings very interesting, in fact this is the kind of artist you could really learn something from by taking the time to learn his songs and expand your world guitar-wise. In a world of imitators who sounds like Jeff Buckely?

Such a shame he died so young.

Never Expected this. I love grace like a hidden gem of the 90s. Please let it be a 5 pack

yeah… I watched all videos… very, somber and made me sleepy. Just the other extreme. I don’t like to thrash my guitar, but don’t want to fall asleep with it either.

This week is not my cul of tea. I understand that lots of people will be happy about this one. Like others said, I will take hallelujah but that’s it. I hope it’s a single in a multiple artist pack. I have enough dlc to no go crazy when the dlc isn’t my cup of tea.

Jeff Buckley’s music is amazing. He was also really good in “Live In Chicaco”. I recoend any fan watch it.

I totally understand some folks might not even know is name as he did only one album. But he was a genius, very nice addition to Rocksmith. If you are not happy there are plenty of emo-metal songs to play from past DLC, so get over it.

I didn’t read the article

Then why did you find it necessary to say that?

Why is this not being released sooner? I totally want to play Hallelujah!

My mind is blown!