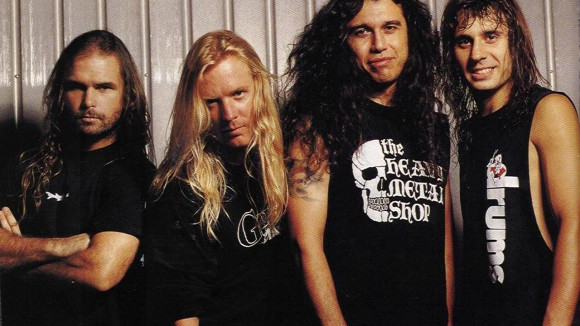 Another week, another standard Rocksmith DLC release. Honestly I don’t think there’s much I can say abouwaaaait a second, SLAYER!? Holy metal, what a pack! That makes another artist checked off the Top 40 list; we’re around the halfway point of Top 40 artist packs – well done UbiSF!

All the songs on all the charts this week are tuned to Eb Standard so minimal tuning is needed to rock out. Let’s make like Buffy and get slaying!

Seasons in the Abass

Let’s start alphabetically with Angel of Death (if you haven’t read Elliot’s write up on why this DLC matters, check it out here). This song falls just over the 5 minute mark and you’ll be doing a lot of strumming in this time with the first 2 minutes of the song having you thrash wildly at those tremolos. On the whole I’d say it’s a fairly simple bass chart with no surprises except for this one little riff that’s played three times, first seen at around 2:35 in the above video. A very powerful driving bassline though and one you could easily go “all metal” to.

Dead Skin Mask takes things a lot slower. I can’t really imagine confident bassists having much issue with this one as the majority is played on the low Eb tuned string with minimal movement or fret jumping. Despite it being pretty simple I did enjoy my playthrough. That bloody child at the end though.

RAINING BLOOOOOOOOD! Possibly the most fun I had from the pack on bass. This is maybe because it’s the only song that’s fingered and nothing gets more fun than playing metal with your fingers, especially going all out on those tremolos. Be warned: the song gets pretty frantic at the end and if you’re not prepared it may sound messy.

I hope you like bass power chords cause Seasons in the Abyss starts off with a few! Weirdly, and I think this is where the critera for taller difficulties at the top falls short now and then, I feel these chord intro and outros are much harder than the main bulk of the song which is primarily a lot of open string strumming. So if you possibly were thinking “I barely have the strength to hold one bass chord and they rank this section as easy!?” then don’t worry as the rest is fairly straight forward.

I have mixed feelings about South of Heaven. Some parts of it bored me, mainly the muted open notes and chords, but when it picks up with the faster strumming sections I really enjoyed it. I’m really surprised I managed to maintain my hit detection in the muted bits also. Generally I lose a few, especially when it’s multiple in a row, but I came out of this song with a “Masterful” 99%!

Before I even start talking about the guitar for these songs I need to make sure you realise just what you’re getting in to with these songs. I know Slayer are generally known for their slow Motown-esque ballads but surprisingly this DLC pack is full of their lesser listened to thrash metal songs and this means fast playing, fast strumming guitar action. There’s not much I can really say other than what’s below in the one-of-a-kind Ted’s Easy Guide To Slayer!

Angel of Death: Is it fast? Yes. Does it have a solo? Yes. Is the solo also fast? Yes. Additional comments – There are some sections where it’s not lightning fast so you could always learn those bits and really hope your friends don’t ask you to play anymore.

Dead Skin Mask: Is it fast? Yes, but not as fast as others. Does it have a solo? Yes. Is the solo fast? Fast enough to cause brief panic and panic in your briefs. Additional comments – I think the intro riff is really nifty (I bet that’s never been said about Slayer before) and something you could easily learn if you put the effort in.

Raining Blood: Is it fast? Yes. Does it have a solo? It has a crazy outro which you could call a solo. Is the solo fast? That doesn’t even matter, just look at the rest of the song! Additional comments – Dude what the hell is going in that outro.

Seasons in the Abyss: Is it fast? Not really! Does it have a solo? Yes. Is the solo fast? Yes. Additional comments – The beginning has an arpeggio sequence but other than that and the solo I think given time you could nail the bulk of this song.

South of Heaven: Is it fast? Not really! Does it have a solo? Yes. Is the solo fast? In parts but not throughout. Additional comments – In my mind it’s the most accessible Slayer song in the pack. The biggest hurdle is the outro solo though.

Wow, and I thought Kerry King looked like a douche bag now.