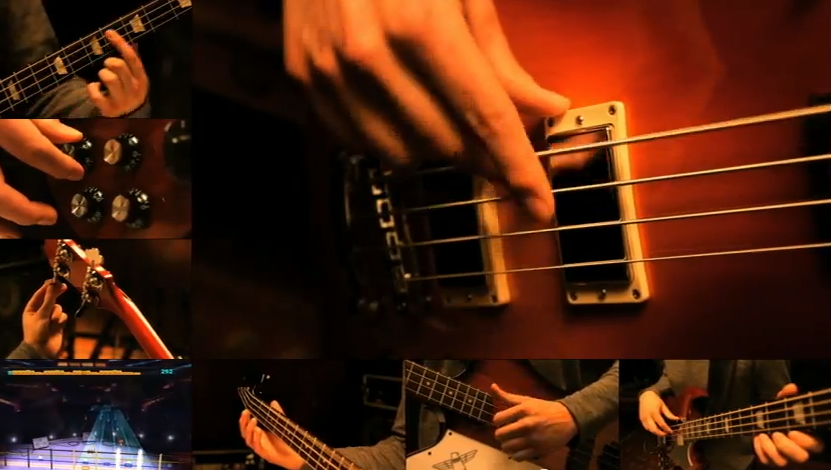 After yesterday’s mix up with the Ubisoft E3 Press Event, (see: no Rocksmith info at all) the forum was in flames.

Thankfully this morning a single Facebook post turned it all around with the announcement of Bass Guitar and the most definitely non-vapor ware PC version!

Ladies and Gentlemen, we’re happy to officially announce that BASS is coming to Rocksmith this fall! It will initially be offered as a DLC for the current game in Sept, then included on a new disk edition of the game in Oct. We can also confirm the October release will include a PC Edition. Thanks for playing Rocksmith, there’s lots more great stuff in the works right now!!

That’s not all though! @NaoHigo and @CrossieRS are at E3 now providing some extra info all day so be sure to follow them on Twitter. Here’s the latest scoop:

Oh and next week’s DLC is Queen

Ubisoft today announced that Rocksmith will receive downloadable content which allows players to plug in and play with a bass guitar. The bass DLC is slated for release on Sept. 4 and will be available for $29.99. In addition, on Oct. 16 the standard edition of the game—available for $79.99—will ship with the bass content included on the disc and the Real Tone Cable, which is a unique ¼” to USB cable that allows you to plug in any guitar/bass into your game console.

The guitar bundle will also be available for $199.99 and includes the Epiphone Les Paul Jr guitar, along with the bass DLC and real tone cable. It will be ship for PlayStation 3, Xbox 360, and PC.

Ubisoft announced that bass arrangements have been added to existing in-game tracks and previously released DLC tracks. You’ll also get the chance to hone your skills like 2-finger plucking, slapping, and popping with technique challenges, tutorial videos and mini-games. You can also play any 6-string guitar to emulate a 4-string bass.

Bass Information as per Rocksmith.com:

I already own Rocksmith™. How can I get the new bass content?

Bass content will be made available as DLC on September 4, 2012.

I don’t own Rocksmith yet… How do I get the new bass content?

You have options! If you buy a copy of the game now for your favorite console, you will be able to purchase the expansion for bass on September 4. There is also an updated retail version coming October 16 which will feature bass content on the disc, and for the first time ever, on PC!

Which songs will I be able to play using a bass?

You will be able to play bass for the 53 songs on the disc that feature Bass mode. Bass arrangements will also be added for all those supported previously released as DLC.

Will I need to repurchase past DLC to play them with bass?

No! The new bass content will add arrangements for all previously purchased DLC.

Do I have to pay more for future DLC to play with bass?

There is no extra charge for bass support on future DLC. Bass arrangements are included with guitar arrangements currently available.

Which features can I use with my bass?

Nearly everything playable with guitar can be played with bass! There are brand-new challenges, instructional videos, bass-specific equipment for playing in Amp mode, and even bass support for most Guitarcade games.

I don’t have a bass… Can I still play the new bass content?

Yes! The bass content features a Bass Emulation mode, so you can play every bass part with your regular six-string guitar.

How are bass and guitar progression tracked?

Your bass progression will be tracked separately from your guitar progress. There will be separate levels, separate Rocksmith Points to be earned, and separate dynamic difficulty settings for the two instruments. Just like with guitar, Rocksmith allows you to play bass at your own pace.

Is it safe to play bass using the speakers on my TV?

Yes. Unlike playing bass normally, playing bass with Rocksmith allows you to use any audio output. Since the software models an amp, it takes care of all the problems that may occur when not using a dedicated bass amp.

Can I play guitar and bass at the same time in multiplayer?

Absolutely! With the new bass content, you can play with any combination of guitar and bass during multiplayer.

I have a five-string / fretless bass… Can I still play Rocksmith?

Yes! Even though Rocksmith will not support the additional utility or certain aspects of your bass, if it has a ¼” output jack and you’re able to play along with the in-game prompts, you’ll be able to enjoy the new bass content. However, we recommend the use of a four-string bass, as the content was designed with that in mind.

What tunings are there for bass?

Will there be a bass bundle available?

No, unlike the guitar bundle featuring an Epiphone Les Paul Jr., there will be no Rocksmith bundle where a bass will be included. However, as of October 16, the existing guitar bundle will feature the new version of Rocksmith with added bass content on the disc.

hah! No gymnastics required. There is a lefty mode for you south paws!

So if i already have the original Rocksmith with the DLC what is the difference between it and the new one coming out ?

It just comes with all the patches implemented and the bass content on disc.

When will the bass dlc come to europe?!

The Bass DLC will be on disc for the PC/EU release of Rocksmith. If you already own the PS3 version outside of North America you can download it on September 4th.

Well looky here, it looks like a new technique! Slapping and popping?

I think you're right. Nice find!

Wasn't the bass stuff supposed to have a bluer aesthetic? Also how are you supposed to do slap on the bass emulator?

They're going to have technique lessons for slapping and popping I imagine. We'll have to wait and see!

So if I want just Bass I have to pay for the guitar parts as well!

Were you expecting otherwise?

I don't have Xbox Live / PSN (or whatever it's called now), but I do own Rocksmith already.

Can I access this new content for a cheaper price than buying a whole $79.99 bundle, when I already have 75% of the new game?

Honestly, it depends on your setup for Rocksmith on PS3. I have had zero problems since the last patch, no lag, no nothing. Maybe the patches installed incorrectly, which is a good possibility. Load times are a wee bit slow but that's a small price to pay to play on my main platform. Compare this to Rock Band where they still haven't figured out what causes the XMB crash bug and don't intend to fix it.

fix the problem b4 u

sum guy here jumped ship to XBOX 4 rocksmith to work correctly.. tats ridicu"list" . if were 2 do tat , i would of flushed $500 down the corporate asshole.. they would enjoy but me ..in the end , ishould slap myself.. nw my theory is correct.. one system is free frm hassle , while the other is hassle . scam i smelled in december bout this game nw i believe my own idea bout wats happening here .. plz ppl dnt let the piper tune you guys 2 its corporate beat … they stopped caring bout us and care about $evil$

Cdog
Reply to  fix the problem b4 u

I feel like I am reading Helen Keller's Autobiography. What the hell are you trying to spell and/or say?

JC
Reply to  fix the problem b4 u

What is this? Ebonics?

Soup
Reply to  fix the problem b4 u

Fix the problem? Dude, you're de problem. Duz dat make sense? And, oh yeh, def should be slappin yourself. Part of tat theory you'se got rollin round you're empty cranium.

fix the problem b4 u

dudes this .. is getting hopeless.. too many defects in this game. Started out ok …till u experience ur first bug.. then another bug . freezing up systems 2 the point of system crashes.. sounds like they dnt give aFUK about there current consumers but new ones… well tats just crooked .. if there were such a place to report a game 4 fraud , this one is it.. FIX THE PROBLEM ASAP . b4 europe founds out bout the bullshit where goin thru .. BUGSbugs bugs .. crash crash crash crash ..anger anger anger anger anger …heard there being sued …reap wat u sow rocksmith . PS3

Author
Tommy
Reply to  fix the problem b4 u

"heard there being sued …"

Lisa
Reply to  fix the problem b4 u

I have been playing Rocksmith bass all morning on the Xbox 360 and it keeps freezing after just about every bass song. I press, "Play song again" and all I get is this little tube icon in the lower right corner of the screen with the letter R in it. It just sits there. After 15 minutes, I gave up. It keeps doing it. Sometimes it works, but most of the time it does not. I have to restart the game, then none of my save data is there. The song is back to zero.

So yeah, it is buggy, irritating, but damn that bass is so much fun to play!

Finally broke down and bought Xbox version of rock Smith. The load times are half of the ps3 version. Now I got a lot of work to do to level up all the songs again.

So, early adopters have to pay for it, but if we had waited to pick it up until the fall, we would have gotten it for free?

Yeah but then you wouldn't have been playing it for a year!

Yep. I know how you feel man.

That's like complaining about Arkham City being on sale recently for $7.50 now when it was previously $60.

Or about how GOTY editions of games that feature previously released DLC are the same price or cheaper than the standalone game was previously.

Getting to play a version of the game earlier or for longer when demand is higher at a higher price is a natural tradeoff. Games will get cheaper over time. Rocksmith and bass is hardly the first, nor will it be the last, example of this.

Can't wait for October. This may be the game I'm most looking forward to this Fall (even though it has been out for awhile). RB3s Pro mode is fun, but actually getting to use my own bass will be so much better.

Great news, but depending on the price of the dlc vs the new edition with the bass content already included, this might turn out to be kinda lame for me as I literally just bought this game less than a week ago.

rocksmith needs to b

So the PS3 patch won't be out till October? Wat? Really?

the fix for queen dlc is in sept?

What is the price?

Bass on guitar is really good, but i still dunno about Queen… MAYYY be a curveball… Maybe the Who really love Queen :O xD

Does this means we're getting "Bicycle Race", "We Are The Champions", "Killer Queen" and "BohRhap" ? 😀

Specially for "Bass on guitar"