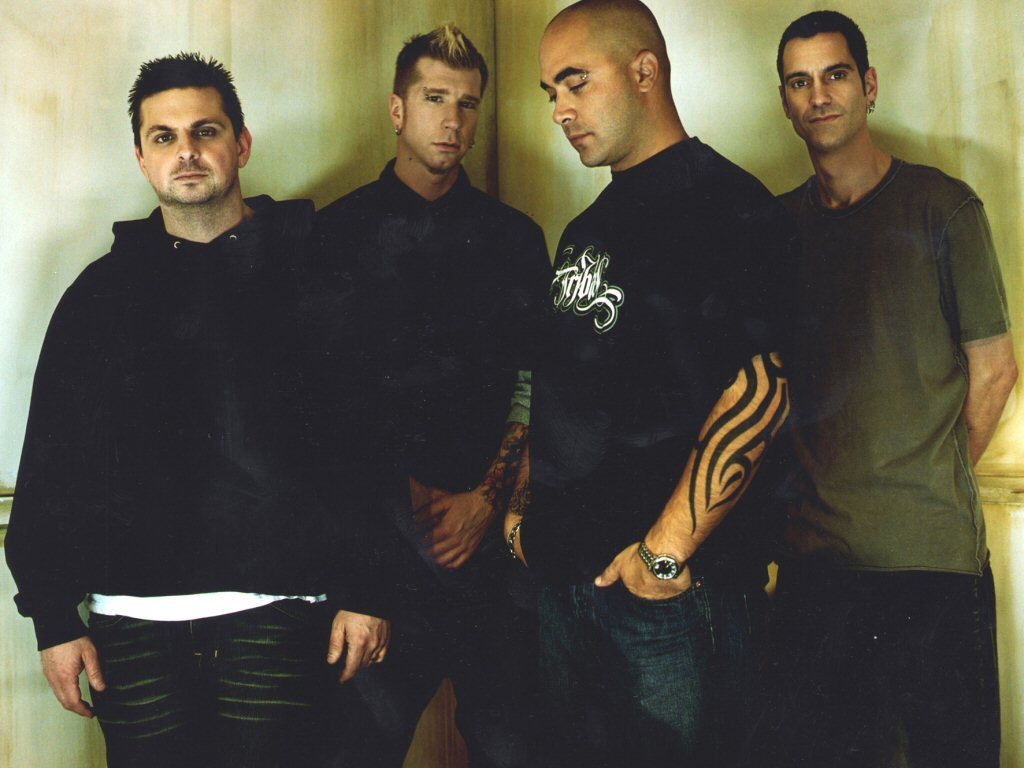 It’s been a while since a clue has taken this long to be solved (4h45mins), but it has been now – so let’s have a look at the clue and how it was solved: 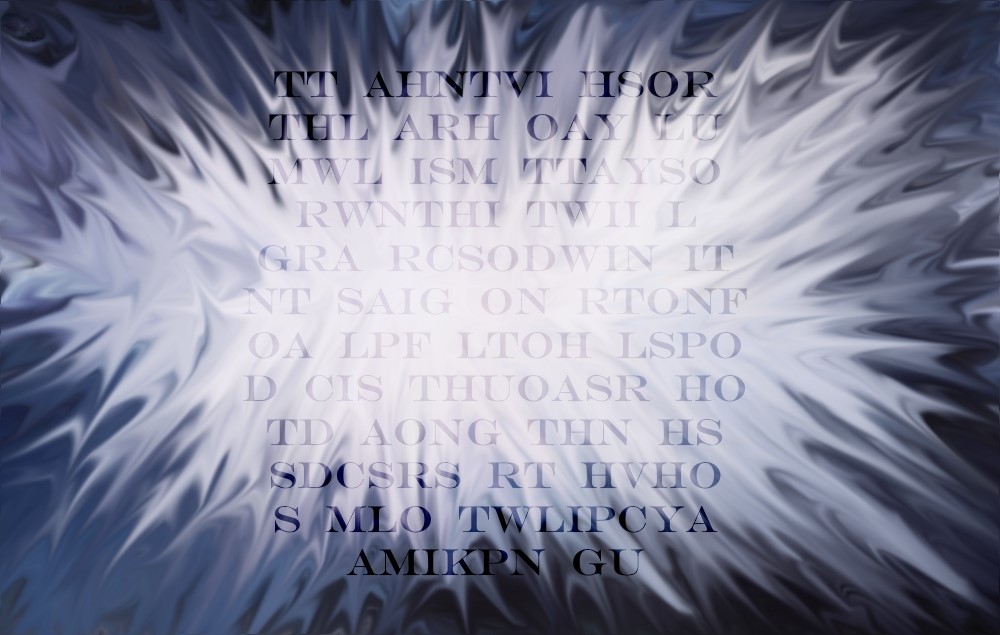 The forum users went down a rabbit hole of looking at ciphers and various other methods used in the past to make the puzzle more difficult, but it was a hint from @UbiParadise that got things back on track

Interesting note: The person who was closest to being on the right track deleted their post. ¯\_(ツ)_/¯

Some /r/rocksmith users had also done a letter count and discovered that there are some letters completely missing – BEJQXZ.

A combination of these 2 things got people looking at anagrams – and getting not a lot of success until Jason stopped by again with another hint;

It didn’t take long for the puzzle solvers to notice the missing E’s and deduced the numbers referred to how many E’s to add to each line to get the anagrams to make sense.

Fast forward nearly 2 hours and we have biscobid with;

The text is from an interview Aaron Lewis did with The Michigan Daily, referring to the song “Outside.”

Que Jason for the confirmation and; 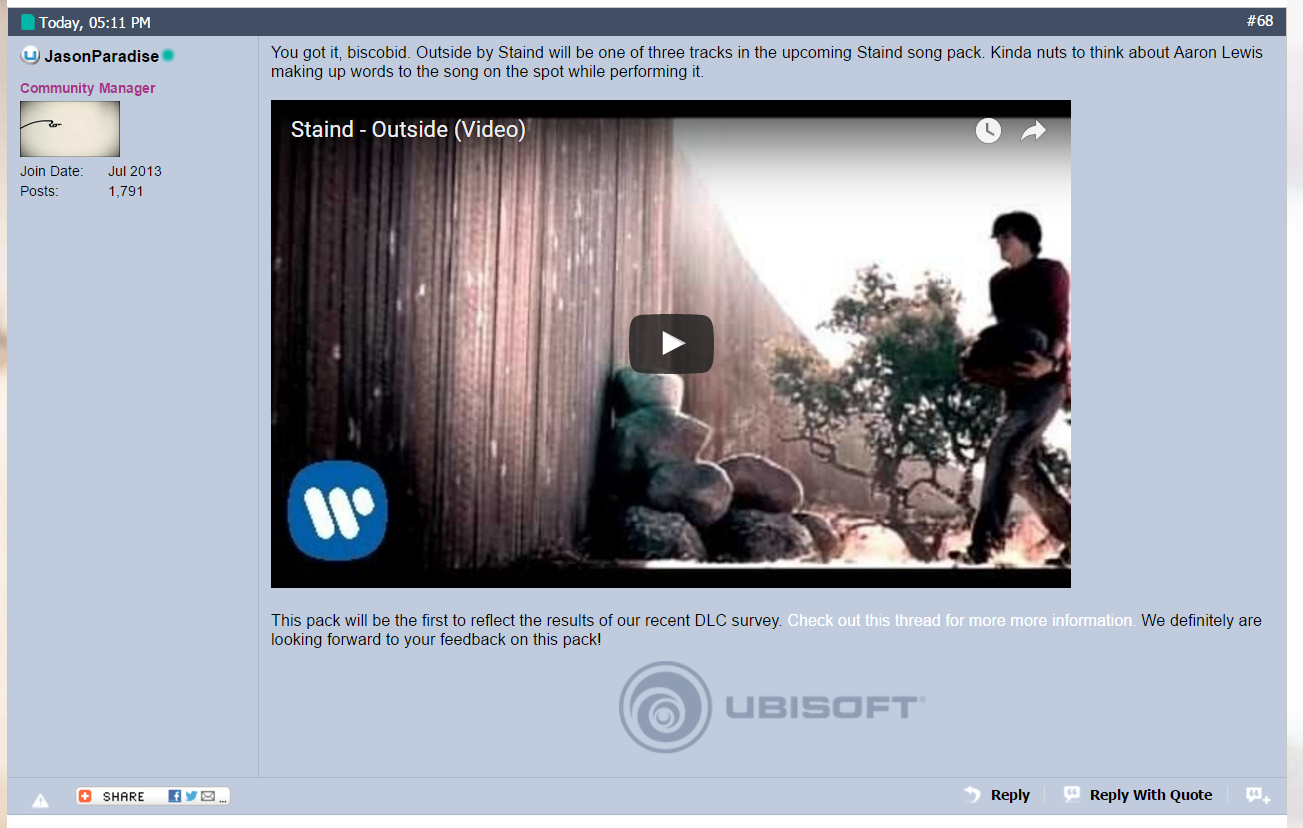 Staind was heavily featured on Rock Band with four singles such as It’s Been Awhile, So Far Away, Not Again, and This Is It.

Staind are also well known for using some really low tunings – and it turns out they might have had something to do with the survey that @UbisoftStudioSF asked us to participate in early July.

Earlier this year we asked some questions via a survey to help shape the future of Rocksmith DLC. Once again, huge thanks to YOU and the entire Rocksmith community for sharing your thoughts with us.

Our next release will be the first time results from the survey have been reflected in a DLC pack. Our upcoming Staind song pack features the most heavily downtuned tracks to be included in Rocksmith 2014 thus far. Thanks to your feedback, we’re offering more than just the true tunings for these songs.

Here is a list of arrangements for each song in the pack:

Each true tuning arrangement will allow you to play the songs in the Staind pack as the band originally intended. Additionally, you’ll have the option to learn each song without heavily downtuning your instrument to Ab. We’re offering the best of both worlds with this release. This approach is something we’re looking at doing more of in the future if the opportunity presents itself.

We definitely want to hear your feedback on this and want to encourage you to share your thoughts with us here in this thread. Have any questions? Feel free to ask them here as well.

Also, we have this information about “how” the retuning will work

For Bass: We had to use some tone switches to emulate the pitches played with a 5 string.

For Outside: A few positions and fingerings were altered to be able to play the song in Eb Drop Db.

For Song #2: We omitted the low Abs played in the song’s true tuning.

For Song #3: This custom tuning (Eb,Ab,Db,Eb,Ab,Eb) had to be used on the main path because the main parts of the song wouldn’t be possible to play otherwise. The guitarist used a guitar in Eb Standard tuning to play octaves which wouldn’t work in this tuning. As such, they had to be moved to a different part of the neck to avoid many wide finger stretches.

So let’s have a look at the likely candidates, starting with the confirmed track,

The following is Speculation

Or are they all So far Away from the tracks you’d pick?

With tunings like these and a catalogue of 7 albums to pick from, what tracks are you hoping fill in those last two slots? How do you feel about the “don’t need an extra guitar tuning” vs the “actual tuning” alt arrangements? I for one am very interested to see how they play in game – if for no other reason than some of my favourite – low tuned – bands now have a better chance of making it to the game as well!

Let us know your thoughts in the comments below.
0 0 vote
Article Rating

Wonder why they didn’t make it a 5 pack.

Music Licensing, could be multiple reasons

So does that mean Slipknot or Korn become possible now?

Anything from the Dysfunction album will make me happy.

Super disappointing for some of us bass players. I really wanted this pack but won’t be able to play it as I bypass the in game guitar tones and split off to an amp. SO it will sound super wonky wherever they used the emulated 5 string notes. The game can handle bass tuning as low as A flat so why can’t they add a fifth string for us advanced players who have setup exotic rigs to maximize what RS can do, or have the the proper instrument.

Simple fix, use the 6-string guitar graphics with 5-string bass tuning. If you want to get crazy gray out the last string (but for those of us who want it we wouldn’t even care about that). I know us dedicated bass players are in the minority but it would be nice to get some of the same love they are giving to the guitar parts now. We KNOW the tuning would work, why the devs aren’t using the software to it’s full potential is beyond me.

Unfortunately bass guys like me who would be instabuys for low tuning bands like Staind, FFDP, Slipknot and KoRN are likely to take a pass on them since they cannot be played right.

I’m concerned about the tone switches being used to emulate a five string bass. I play through my amp and I’m worried that its not going to sound right for me. I would much rather have a five string chart option. Guitarists get at least two tracks every song and I understand that this started as a guitar game and that bass was added almost as an after thought but it would be really nice to see a five string bass track once in a while. UbiSoft asked if we had capo’s, next let’s ask the bass players how many have five or six string basses. With thick strings rocksmith’s note detection problems can be greatly reduced and I think helping bass players expand their capabilities is something Rocksmith can and should do.

Also agree, my guitar and bass are both extended ranges. Would be amazing to be able to utilise them properly!

LOL, I third that notion. I just wrote my own rant on this subject before reading yours. And yeah it is going to sound super bad wherever they “tone switch” if you play through an amp like we do. Wish they would realize how many of us are doing that to avoid the in game tone audio lag and to truly be able to hear yourself playing.

Yes! Those playing without an amp and that have never used one don’t know what they’re missing. Y splitter FTW!

Id love a flat or mudshovel for the 3rd song, its been awhile is a shoe in , i think so far away also has a big chance in being the 3rd track , but id love a track from thier first album

Maybe this will mean we could see some korn , slipknot, mudvayne and sevendust soon with such low tunings

Yeh i’m suprised Sevendust isn’t RS as they’ve practically covered all grounds on the rock to metal spectrum… I’m despo for Waffle or anything from Home!

Looking at song #2’s explanation “For Song #2: We omitted the low Abs played in the song’s true tuning.”

That has to be Mudshovel. It’s the only song I can think of where that might work.

I can only hope the cover of “This is Beetle” is part of this pack.

i love that there is the real tuning and alt tuning its a great idea keep em coming boys. cant wait for some more METAL!!

HELL YES!… i literally only just started trying to play these guys a week ago!…Absolute instabuy for moi!

Anything from Dysfunction or Break The Cycle… they went to shit after that.

Since Outside is confirmed and Its Been Awhile is inferred/assumed to be included I really hope the 3rd song is either Just Go or a heavier tune.

My thoughts entirely. Dysfunction was a great album, then they got famous with a ballad, which American audiences lap up, which ends up being a poisoness pill.
Then fame destroys there talent.
I hate thinking what if they hadn’t have got famous and didn’t change there musical approach. 🙁

Whelp, looks like all 3 songs are lame ass ballads.

Time for me to get out my 7-string! I need more practice on it!

I’ll wait and see. I’m not a Staind fan. Their music is too depressing and simple. They’re songs have a nice melody but the songs seem too long for them. I look at it as acoustic singer/song-writer songs set to a rock band format. The band doesn’t really need to be there. Like Chavelle.

Tried listening to a few of their songs today so I could play the guessing game but after the first chorus of each song I tuned out. The bass line is kinda muted, making it hard to follow.

Can’t get into the post Allen Woody Gov’t Mule as much as the original. New Mule is all groove, standard. I don’t think that it’s a co-incidence that Gov’t Mule is no longer a power trio. Allen Woody left a big sonic space to fill.

Must have Mudshovel or it’s bogus

Agreed. This must have a song from dysfunction or will be a huge miss

I was the one who deleted my post. I had no idea I was on the right track.

yes!! i’ve been waiting forever for this band to be added!! honestly, any other two songs, but i’d like to see falling and some of the harder ones. so pumped.