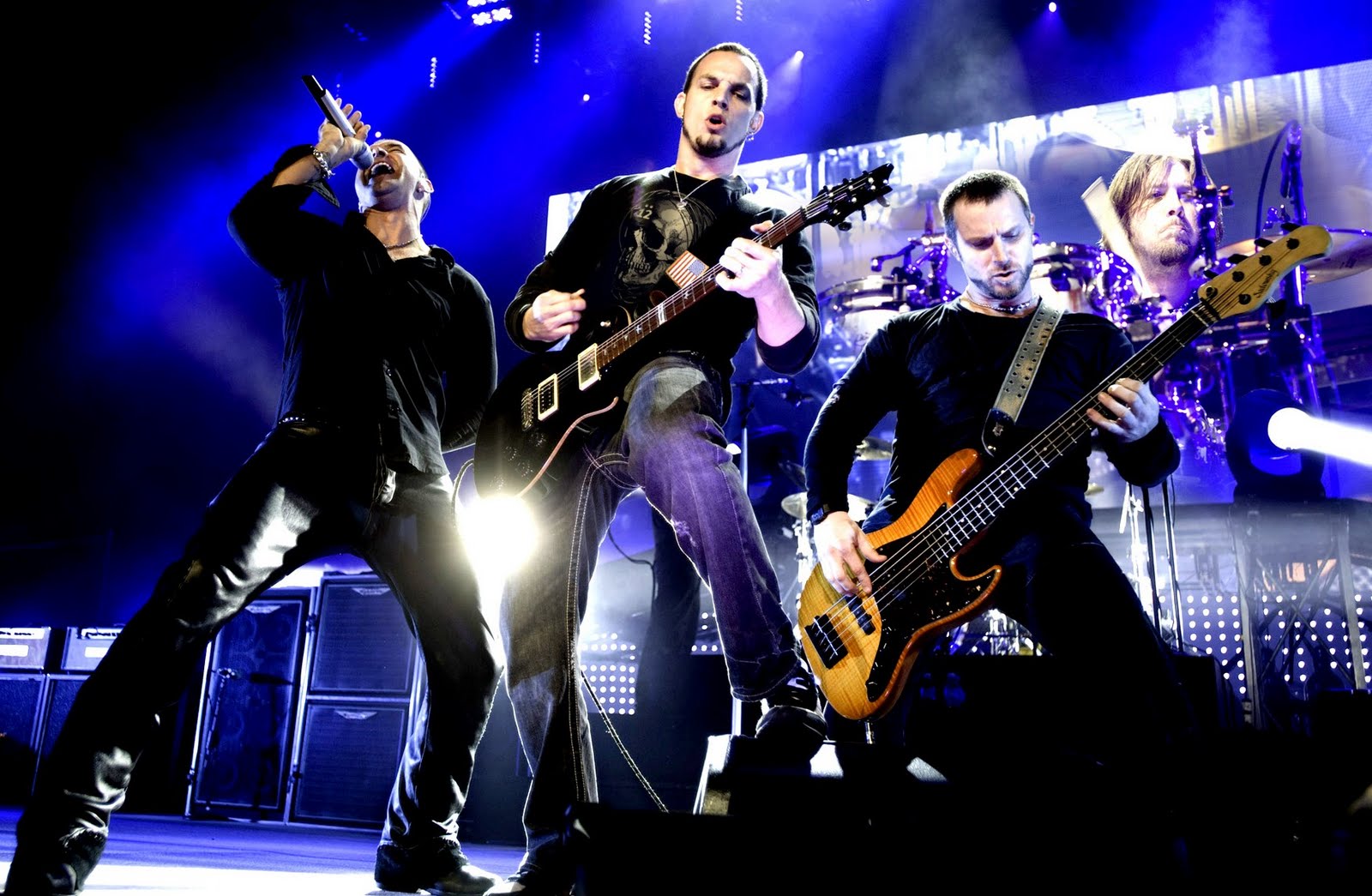 Well, the forum is back and the clue was posted again, it seems like we solved which band it is but we are still missing a piece of the puzzle.

So it’s definitely Creed! One thing you should know about Creed is that the guitarist was none other than Mark Tremonti who you may remember from April’s Alter Bridge DLC. Definitely look forward to some catchy riffs, and maybe even some challenging solo work.

For those that don’t know, Creed is one of those bands that people love to hate. Scott Stapp (the lead singer) due to his personal life and other reasons is an often lampooned individual, and his yarling vocal style has often been parodied to great extents.

Regardless of this, Creed is still a band I grew up hearing constantly, and quite a successful one at that. Surprisingly only one song of their’s ever made it in a music game, and it was brought to the table by a Rock Band Network authoring company by the name of Rhythm Authors.

Here’s what we are expecting next Tuesday.

Are you excited to finally get a Creed pack in a music game? Or is this worse than those other DLC weeks you thought were the worst? Let us know!

Can someone please explain why a band like CCR only has 2 songs in this game while bands like Creed, No Doubt and Duran Duran get an entire DLC pack? Something ain’t right in the world of rocksmith….

They both play a part. We can’t convince artists to give us music if they don’t want to give us music. Some artists are just not interested, some have tricky legal issues (multiple owners of a song all have to sign off). So it’s not a straight-up “we value this artist more than this other artist” thing. It’s a “who wants to work with us” thing.

I know this idiot is just trolling, so I won’t let it elicit a response from me, but I do hope this person gets banned.

Side note: at least learn how to spell your offensive, hateful worlds correctly.

only song id consider getting would be my sacrifice. but ill likely save my money for a 80’s rock pack

Good DLC, and i will buy it!
But still waiting for the Coheed and Cambria!!

Please do not tempt them. I think Creed and 311 were punishment for being insolent.

Sheryl Crow would be awesome 😆

Love me some Sheryl Crow and Kid Rock.

What about some Crew, Twisted Sister and Quiet Riot? HAHAHAHAHA

I was a huge Creed fan was younger, and still do kinda like ’em. This’ll be an easy buy for me, though I could do without “With Arms Wide Open” or most anything off Full Circle (“Overcome” would be okay).

Big fan of Tremonti, less of a fan of the rest of the band. Regardless, I’ll still get it.

Still waiting for the Tool DLC.

Yes to Creed! No to all of their “radio” crap! I’m hoping to see stuff like Beautiful, Say I, What If, Never Die, Pity For a Dime, that kind of stuff. If we get a bunch of their hits, I’m afraid I’m gonna have to a la carte it rather than “pack” it all in.

Too bad those guys caught so much flak but I think it’s seriously from all of their radio friendly stuff after everyone got burnt out on it. I bet most people who ripped them hadn’t even heard the other 90% of their non-hit material, the rest of which is pretty decent.

Crossing my fingers but not holding my breath…

Yes, agree. I feel the same way about a lot of Nickelback’s material…the radio stuff is total crap. It’s the non-singles that are better. I think they’re record company is pandering to the people who like to just hear the same song remixed in 5-10 different ways, ie the young crowd.

Pity for a Dime would be an AWESOME pick for Rocksmith.

“What If” and “Higher” are the two I’d really want to play, though “Bullets” would be fun as well.

I don’t see what the point of using the request form is when Rocksmith is going to post DLC that NOBODY in their right mind would ever request nor want.

That logic is as backwards as your name.

And by “nobody” you mean you and your (I’m guessing) Death-metal friends who think no other genre of music or band other than those you listen to would be good for learning how to play guitar?
I’m fine with this release, and I’m very much an 80s rock/Hair metal fan.

I will be giving it a miss as I’m not a fan but, Reminded me of this..
“Music snobbery is the worst kind of snobbery. ‘Oh, you like those noises, those sounds, in your ear? Do you like them? They’re the wrong sounds. You should like these sounds’”
Dara O’Briain

Creed was inevitable it sold well in the 90s and Scott is the lovechild of Vedder and Weiland . Riff repeater should build a dlc predictor to show the odds of an artist being added to rocksmith

Still surprising that we got a Creed pack before an STP one.

I’m happy to see Creed in Rocksmith. Stand Here with Me is my favourite Creed song, I doubt we’re going to see that one though. *I* am expecting My Sacrifice.

Creed takes a lot of crap for no real reason, I think theyre pretty good and I will definitely get the song pack

Yes! I would switch out One for My Sacrifice.

Hoping for bullets and what if!!

Another pack I am not excited about (I find Creed pretty dull), but probably will pick up some songs, due to (hopefully) good charts. Seems like too many these days.

I welcome anything from mark tremonti. Creeds singers voice is not my cup of tea find it a bit monotonous to be honest but hey Im not gonna be singing .

I’ve always put shit on Creed… but after the Alter bridge pack I reckon the guitar learning should be good.

Do you know if they experimented with alternate tuning as Creed? or are we to expect E standard?

I think My Own Prison is drop tuned

Most Creed stuff is in Drop D. Tremonti does play around a bit though, I know My Sacrifice is in some alternate tuning.

I learned a lot of Creed stuff in my earlier guitar years because it was something right at my skill level. Harder than most nu-metal that I was into but not as difficult as Metallica or other heavier bands.

Can’t say I was ever a real big fan of their stuff but, I think they’re better than say Nickelback, 3 Doors Down and the like.

Being better than Nickelback is hardly saying much though.