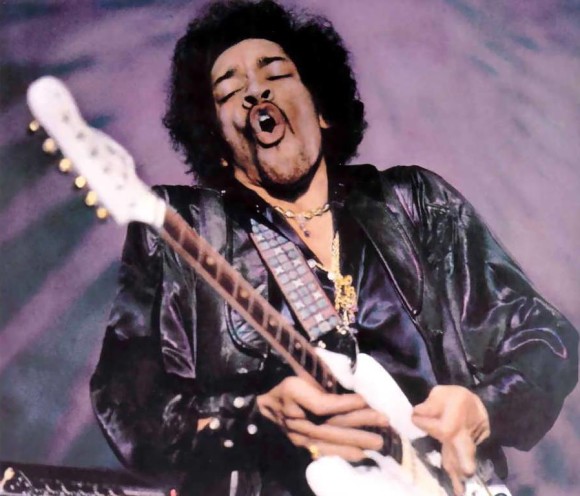 In honor of the season and the recent Hendrix DLC, we’ve decided to shine some light on some of the Rocksmith artist’s most impressive fretwork on offer (other than the Hendrix DLC, since we don’t want it to take up half the list). From The Riff Repeater editors, here are some of our favourite solos in no particular order:

It’s a cliche to mention this song in any list of the best guitar solos, but we might get flogged by our user base for not including it. Nevertheless, it will certainly take some chops to pull off this song’s four-minute long exercise in pentatonic scale soloing.

Fast, frantic, and very challenging. Richie Blackmore quite possibly invented the “one-string tremolo”-heavy solo seen so much in later heavy metal with this song.

Get ready to fire up riff repeater. Glenn Tipton and K.K. Downing must have fingers made of lightning or something…

Perhaps one of the best showcases of Joe Perry’s masterful bluesy soloing. I think we’re starting to see a pattern of blues-inspired solos here…

I hope you’re all practicing your fingerstyle for this song.

Dammit, Reb Beach, why can’t you cool it for even a second?

Tom Scholz’s most underrated solo and one of his absolute best. Try its equally legendary bass arrangement as well, while you’re at it.

Performed by the late, great Duane Allman; may he rest in peace. If we could only get Layla, then his true genius would shine through.

There’s just something about the way the crescendo is resolved to take you out of the song. Jonny Greenwood is always on point. Check out Jarred’s write up of the song

Just gets more and more intense as it goes on.

A super underrated single that every guitarist needs to check out.

I go back and forth on this, Supersonic, and Champagne Supernova, but in the end this is definitely the winner.

It’s not Dragonforce but it’s definitely getting there.

Also one of the toughest songs on Rocksmith…

If you haven’t imported the songs from Rocksmith yet, this song is a pretty good reason.

Balroom Blitz with a twist.

Hope you enjoyed our listicle, our apologies to Iron Maiden, ran out of space again.

Bright lights is unreal! Thanks for including it in the list.

No problem, been pushing that song on everyone since day one

Is the dude in Ghost Walking tuned a little flat, or it just me?

Good lists, personally I would certainly have included Dick Dale’s awesome track, Satriani’s (only) track, and also I have a fondness for ‘Anastasia’ by Slash. And I also think Hanger 18 should be in there too. 🙂

Ahem. Aren’t You Gonna Go My Way. Bass Solo. Screw you all.

Would it make you feel better if we made an article about bass solos in Rocksmith? We already have one about songs all people need to try on bass.

I love the megadeth and the avenged sevenfold tracks.

While reading this list, I was about to say, “What, no Bambina?!?” Then Elliott saves the day at the last moment.