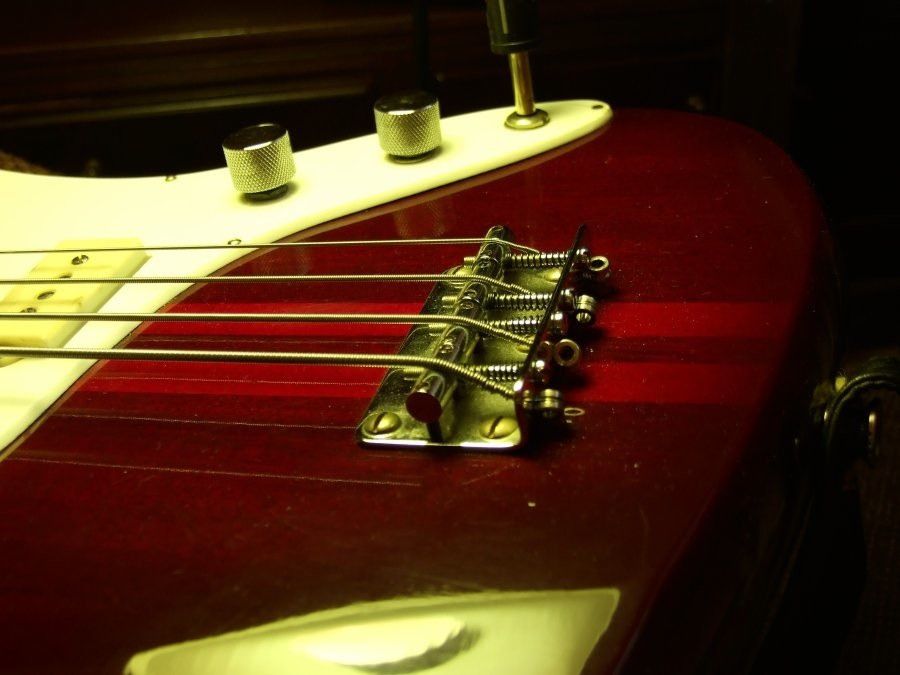 Well, a lot of people like to say that, but it takes a zen-like focus to hold down the rhythm section of a band. Without the Bass (Unless you are Jack White or Dan Auerbach perhaps) most songs can sound empty and lack that underlying sub-woofery wave that you sorely need.

What songs can Rocksmith 2014 offer for the aspiring bassist? Well, if you’ve overlooked these 20 songs we’d have to say you’re doin’ it wrong.

It’s that right balance of challenging with fun. Because not everyone wants to tangle their fingers up in YYZ.

Why is this the ONLY Red Hot Chili Peppers song we have so far?? Seriously… Why? Fix that please.

Entwhistle was a beast, wish the DLC picks better reflected some of his wilder bass lines though…

A definite fan favourite, what list would be complete without MOAR MUSE?

This song is pretty great on everything! Lots of variation throughout awaits you, especially at the end when it gets slide happy!

Say what you will about KISSCO but this bass line is fun as hell!

Alright, so it’s a bit of a frat boy jam and easily gets dismissed by most, but you really need to try the bass line. @Audrey123talks seems to like it!

If you’re skeptical of why this song is on the list skip to 2:25 and you’ll understand.

Some call it the best bass chart so far for Rocksmith 2014… I’m just wondering why Tom Scholz can’t just chill out for a second!

One of my personal favourites. James Jamerson knew how to lay down a solid groove.

Not that many songs that have slapping in it available so far, so if you don’t mind tuning down a bit (Eb Drop Db) then you might be interested in this song… SOYYYY!!!!

Fast paced and enjoyable, Mike Dirnt is no slouch on the bass.

Drawing more attention to this amazing and recent song from Rush.

Prepare to be surprised…

One of my favourite songs from Rocksmith. Some bias here but I really enjoy the kind of bass lines that go off on a completely different direction.

Did we miss any bass picks? (besides all the other RUSH songs) what’s your dream bass song for Rocksmith 2014? Let us know!

LITTLE GREEN BAG -- so fun to play on bass!

Thunder kiss ’65 by white zombie is a fun one

It's a pleasure to see that 6 of my videos are presented here 😀
Thanks for this ! I'm gonna try the few songs I still didn't play.

Jenny O -- OK Honey is my favorite.
Rise Against -- Savior is pretty good too
Never cared for muse, but Plug In Baby is really damn fun.
Tame Impala -- Elephant feels awesome to play.
Vampire Weekend -- Cousins is bananas and I hope to be able to play it one day.

mate you missed a lot of other great stuff of course, and that's fine, but forgettin the Maidens and their bassist Steve Harris…

It's not like that on Chrome. Are you on Mobile?

The video for Brand New Kind of Blue is actually the video for Headlong Flight. Kinda bummed me out.

I just bought a bass and started playing 2 months ago and I've mastered 75 songs in Rocksmith 2014. It's so much fun playing bass after all these years playing guitar. My favorite4s are Well OK Honey, Have you ever seen the rain, Spider and the Fly

Painkiller by Judas Priest should be included

All the stuff from the recent Dylan pack is actually quite fun on bass, especially SHSB

"What's going on" is one of my favorites to play..

Really love playing What’s Going On by Marvin Gaye. All three Pearl Jam songs are also favorites. Radiohead has a whole bunch of good songs, my favorites being Optimistic, Bodysnatchers, and Paranoid Android, and My Iron Lung just for the slapping and popping parts. Sweet Emotion by Aerosmith is great. Under Cover of Darkness and Last Nite by The Stokes are really good. Finally, I’d have to say my favorite bass is Use Somebody by Kings of Leon, but that’s just because it’s my favorite song overall. 😀

I personally would love more Kings of Leon in Rocksmith. Immortals and Supersoaker have really nice bass lines. My Party, McFearless, and Soft are also good baselines.

And is it just me or is the new Social Plugin knackering the web page load times?

the Facebook embed? Let me know if this persists

Personally, I really enjoyed learning Interpol’s “slow hands” and QOTSA’s “my God is the sun”.

I’d suggest Mind Eraser, No Chaser by Them Crooked Vultures not only because it’s fun but it’s probably going to be our only chance to play a John Paul Jones bass line in Rocksmith.

I Fit the quote, I was musically challenged when I bout RS1 in the original bundle at age 35, never had held a guitar in my life….I found getting my head around 6 string’s was too much, and after a month when out and got myself a Bass Guitar.

Played RS1 for 3-4 months straight on bass, and then went back to the LPJ and took to it like a duck to water, haven’t really looked back..

Only find I pick up the bass once or twice a month now for a session or 2 in RS2014….but hell I have the most fun when I do!!

I think Bass (and Rocksmith of course!) is a great stepping stone for people who have never played a string instrument before and aren’t sure if they would be any good…. bass is a definite confidence booster!

Heck yeah, just played limelight (still stuck at 99.5%) and came to find this. Easily the most played in my collection. California Brain is second, followed by that fun as hell Vines song.

A little surprised to not see Between The Lines. I think that song got me past a huge learning hump.

I love the bass line for “Burning For you” by Blue Oyster Cult. I always warm up with that song just because I find it so fun

I’m a fan of Godzilla for the same reason.

From Noon Till Dawn -- it’s rather challenging and quite fun to play. I think this song deserve more love.

My Chemical Romance -- Planetary
Foster the People -- Pumped Up Kicks

I actually had “Planetary (GO!)” on there originally

Not a bad list, I agree with most picks.

A couple of tunes I have a hell of a lot of fun with are Taddy Porter’s Mean Bitch. That’s just a fun song to play. Ok Honey by Jenny O is a fun little song too. Lenny Kravitz’ song, during the guitar solo -- that’s a fun bassline to rock too.

Agree that Iron Maiden should be represented somewhere here, but then how do you choose which song?

Future requests -- more RHCP, and definitely some Dream Theater -- Pull Me Under and Metropolis at the very least.

Love the bass feature. Would love to see another instrument added on. Maybe keys or synth.

All 3 Allman Brothers songs have great baselines. Jessica and Southbound are pretty challenging but a lot of fun at the same time.

“What’s going on” should be included imo… if u are a bass player, old school RnB needs to be appreciated. Not to mention it’s got a unique feel to it and it’s fun as hell.

Does anyone else feel like for the rush songs, it doesnt even feel like you are the one playing bass on it? I can still hear the bass track loud and clear when playing…

“What’s going on” should be included imo… if u are a bass player, old school RnB needs to be appreciated. Not to mention it’s got a unique feel to it and it’s fun as hell.

Nice list, although I would certainly put Space Oddity up there (it’s really good, and way harder than i expected), and any of the Iron Maiden tracks. Steve Harris is a bass god. And yes, we NEED more Chili Peppers, and more than one damn slap bass song!!! Primus… primus… primus.. sorry, I’ll stop now. Nice article!

Let’s not forget YYZ with his bass solo

LOL. Let’s say that those not impressed by this list should keep looking, there are better songs.

I would have included:
Space Oddity (David Bowie; RS1 DLC)
Paranoid Android (Radiohead; On Disc)
Give It All (Rise Against; RS2014 DLC)
Girl’s Not Grey (AFI; RS2014 DLC)
Give Up The Funk (Tear The Roof Off The Sucker) (Parliament; RS1 DLC)
Unnatural Selection (Muse; RS1 Import)
Cowboys From Hell (Pantera; RS1 DLC)

Space oddity is SO much harder than I expected! Got two more sections to learn then I’m 100% on it. Give up the funk is AWESOME. I’d love more Funkadelic or Parliament…

Give Up The Funk is insane, but fun to play. I haven’t played many on the list.

Thanks for the list! After the Clash and Rush songs, I pretty much stopped playing bass because I didn’t want to wade through the boredom to find the gems. My one request would be that you include more on-disc songs in lists like these.

Bambina has a fun center for walking the bass. But it’s pretty much basic on both sides of that.

Oh, and I love laying back with Drift Away.

Violent Femmes Blister in the sun is a lot of fun to play because the song is bass driven. Would love more Pixies for bass and of course Primus but most of those songs would not translate well to a 4 string.

YYZ is missing (enven if it is mentionned).

is this a joke? No Maiden?

Yay, Limelight is my video ^^
Nice list, bass always deserves more attention 😀 (Although there are always more songs you could have put here ^^)
Oh and that Higher Ground playthrough is just pure insane :O

I would like to add that one that I really really like to play is Space Oddity by Bowie,

(Thanks TAB, really)
…,as it actually covers most of the 22 frets of your bass ^^ I always have fun playing it, and it’s really exciting to try to do better everytime!

Knew I was forgetting something obvious… Both David Bowie songs are must haves!

Both? You mean all 3, surely! All great basslines, all great fun to play! 😉

Well I agree, Rocksmith 1 is a must own game 😉

I’d suggest adding Boys Don’t Cry by the Cure to that list , the bassline is way more fun to play than the lead arrangement.

Good call, The Cure has excellent bass lines all around

You call Redneck fun, I call it “How the hell did I manage to get an 86% mastery?”

Also, Me and the Bean is simple and fun at the same time, nice call on it.