The second Rocksmith 2014 reveal has been posted on Facebook, and it’s one of the most influential rock songs of all time.

It was slightly hinted at yesterday when they posted the music video for R.E.M’s Losing My Religion as seen here: 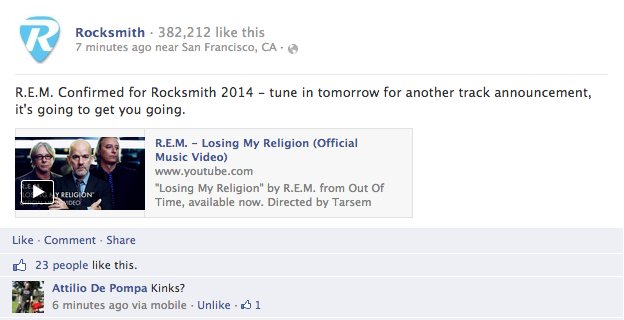 Yeah, it’s not the Van Halen cover, you weren’t expecting that were you? Oh dear, well you better read this.

The influential distortion sound of the guitar track was created after guitarist Dave Davies sliced the speaker cone of his guitar amplifier with a razor blade and poked it with a pin. The amplifier was affectionately called “little green,” after the name of the amplifier made by the Elpico company, and purchased in Davies’ neighbourhood music shop, slaved into a Vox AC-30.

This is an amazing grab for Rocksmith 2014, can’t wait to see what other songs from the 60s or even 50s they can get!

Something Ahab by Mastodon, it’s not called that but it’s something with the whale

Blood and Thunder by Mastodon is today’s song.

I’m sorry, not to sound snobby but I’m not feeling ANY of the Rocksmith 2014.
I never bitch or nag about well this video game mwahaha but I really enjoyed Rocksmith… I’m worried this is going to be a let down and I have a wide arrange of variety but wow…

Jacob
Reply to  Jacob B.

Really? I’m lovin the setlist; because it ROCKS way more than the original rocksmith setlist.

Only 2 songs so far for classics week? Theres gonna be more to come right, or did i miss something?

You didn’t miss anything, we’ll see if Paul gives any hints for next week 🙂

This song really got me!

Woho at least it’s not metal!

And also a good song

sorry but next song is and its first letter is M

And since my swears will be censored soon, oh for heavens sake, why must you ruin it with that godforsaken screaming music, it is just loud and screechy
aaaaaaaaaa

Are you talking about Mastodon or The Kinks?

Mastodon, I would never call The Kinks screechy, also lovely that you didn’t cut my earlier rather childish comments, it shows character, or something