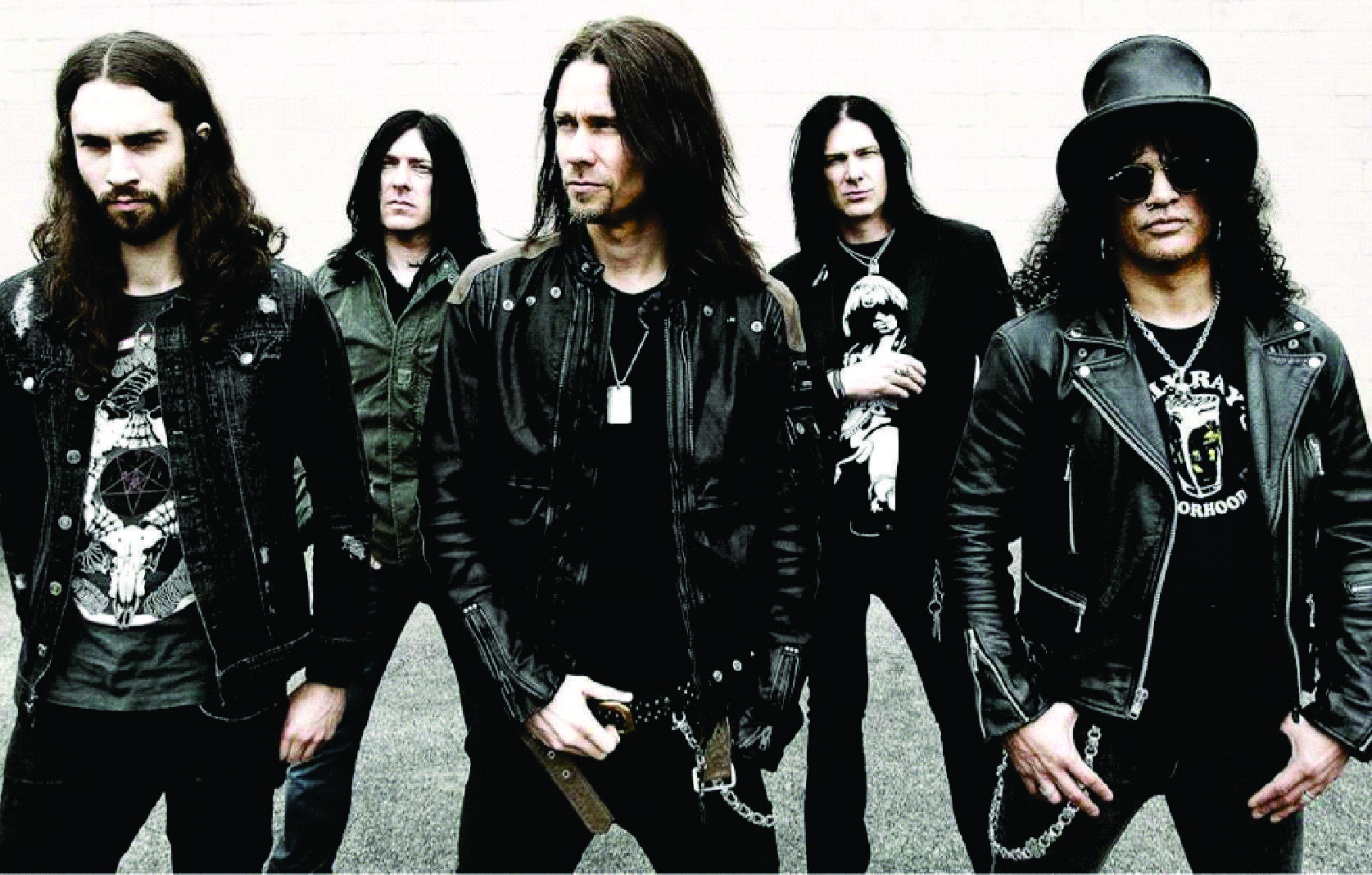 Hello Rocksmith fans and welcome to the last DLC of May!

After last week’s simplistic yet satisfying Cake DLC, it’s time to up your game with a 3 pack from legendary rock and roll guitarist, Slash!

If you liked the sound of Alter Bridge’s vocals, you’re in luck as all songs feature Myles Kennedy on vocals! Anastasia, You’re a Liar, and the previously BandFuse released track Back from Cali.

Does this satisfy the itch for some bluesy rock and roll? Is this trio of Slash songs your dream come true? Or your worst nightmare? Let us know!

I just started learning ‘Anastasia’. Up yours, slash! Too bloody hard, hahaha! I’ll get there, but it’s going to take a while…!

All you guys do is complain. ❗

Glad to see Slash on board with Ubi now, and the songs sound solid, but this week is probably a pass for me (for now)

That’s not for me this week.. it’s nice to see a legend like Slash in RS, I admit it’s a good guitar work, but it’s above my skills and out of my tastes.
And when i hear people complaining about Cake’s singer’s way to sing, I’m laughing at that Myles Kennedy voice and lyrics..! Britney Spears and other teen pop idol could have the same lyrics!

come one guys, how can you dress in black leather, have tattoos all over you, look like bad guys and angry, and sing something like “you’re a lie”? 😯
well, after all that, i’m still glad, cause i know a lot of people will buy and enjoy it.. but not me.

Where the hell is Ghosts.

you know what rocksmith needs

OZZY FUCKING OSBOURNE
how about some crazy train, gets me through, mr crowley, etc, etc

Anything with Randy Rhodes guitar work would be awesome, suggest the songs through the app.

what about Huey Lewis and the news man?

I think their undisputed masterpiece is “Hip to be Square”, a song so catchy, most people probably don’t listen to the lyrics. But they should, because it’s not just about the pleasures of conformity, and the importance of trends, it’s also a personal statement about the band itself.

I wish there was a pack of 5 from various groups. Including Huey lewis

Hell yeah. Slash is a top-shelf rocker. I am picking up the whole pack, even though I already learned “Back from Cali” with Bandfuse.

Looks awesome to me!!

Can we get some Korn? Creed? GNR? How about screamo (August Burns Red, Of Mice & Men, etc.)?

GnR -- when pigs fly. Maybe if we lived in Paradise City 😐

To be honest Creed is most likely out of his whole list.

While Creed had a plethora of hits and is more widely known, Of Mice & Men is just as relevant as A Day To Remember… and they got a 5 pack.

Not saying that I’m hoping for OM&M (not a fan, personally)… just pointing out that it’s not that farfetched.

EDIT: August Burns Red’s last album peaked at #9 on US Billboards. #2 on the Christan Rock charts, #2 on Hard Rock, #3 on Rock. Plus, these dudes shred and have some tight, tight breakdowns.

My logic was more to the fact that we got Alter Bridge at the end of April, Slash featuring Myles Kennedy now at the end of May and the band members for Creed are the same as Alter Bridge except Scott Stapp on vocals instead of Myles.

This fact as well as Creed being well known and having a fair number of big hits is why I see them being most likely to get DLC and my prediction would be the end of June.

Uh…no, thanks. Korn is the least awful of all the bands you’ve listed, and that’s really saying something.

Have you ever listen to August Burns Red? Are you just put off by screaming? If you can get past that (which I know a lot of people can’t, and I understand their aversion to it), the music a lot of these heavy/screaming bands produce is light years beyond what you hear on the radio.

That song sounds like Slash got tricked into traveling back in time with a karaoke champion and his only way back to the present is to teach a bunch of Ancient Egyptians how to play rock ‘n’ roll and the drummer is ritually sacrificing his drum kit upon an alter(bridge?)of awful bass tones and useless Rhythm guitar.

What they get back from cali the bandfuse anthem? Does this mean there was some kind of buyout by ubisoft since bandfuse sales were weak? It would be nice if we had improved note tracking, better sound and ability to drop out tracks to hear yourself playing.

It probably just means they were able to license the track. I really doubt there was any kind of “buyout” just because a track shows up as DLC.

Slash doesn’t do much for me if he isn’t with a good singer. Miles ain’t doing it for me and I’m not big on showboat songs where you solo the whole time. I still will beg for an 80’s hair metal pack.

Matthew
Reply to  Philly B

Hear, Hear (to the hair metal pack, i personally like myles), where’s our Ratt pack (no pun intended) of You’re in Love, Lack of Communication, and Lay it Down? DiMartini is easily the most underrated guitar player of the 80’s. In fact, I’m off to request that again right now, ta!

Hey, Cake wasn’t that simplistic on bass. I’m afraid Slash might be, though
How is it on bass?

Thanks, guess I’ll skip on Slash.

Generic, Trujillo? Really? Have you not heard any suicidal Tendencies or Infectious grooves? Nothing generic about his bass work there at all.

I don’t really see why he’s talking about Trujillo…. 😯
and i totally agree with you, Suicidal and Infectious are awesome, especially for bass.. and i’d like to play the guitar parts too!
let’s go on the request app to ask for both of them..
they would have a lot of work to censure all the fucks in the lyrics though.. 😀

Cake bass lines were easy (except for I Will Survive). I bet Slash will be equally easy, just less quirky… more of the same old same old hard rock sounds.

This may be the most apathetic I’ve been towards DLC since The Doors.

Still going to pick it up… not in any rush though.

EDIT: Terrible promo photo. They should reconsider the whole black leather and denim look. And use some conditioner, eh?

“This may be the most apathetic I’ve been towards DLC since The Doors.”

This is something I feel, but didn’t possess the ability to put into words. I might buy it still, but I need to see the bass charts.

glad i’m not the only one 😉

Those are some terrible picks… Two songs from his awful second album and the worst song on the first album… Even though Slash is one of my favorites, I ain’t pickin’ this up.

I love these songs. I have to admit I kind of ignored slash because there was so much damn hype, but I think I’ll be getting his album/s now. Great range of styles just in these 3 tracks!

Nice! Shame it’s only a three pack though!

It’s great to receive this pack although I was really hoping for By the Sword and maybe Paradice city as it was on slash’s solo album, hence would appear to be the only way of obtaining a GnR song. Oh well, still cool.

Rocksmith just gets better and better. ALTER BRIDGE AND NOW SLASH WITH MYLES KENNEDY. the only way they.l equal these is either a satriani pack or a Vai pack. Heres hoping. Lol

Oh yes! I can finally learn good the solo of back from cali

Does this release mean we will never get to see a guitar game with Real Mode again?

May is probably one of the best months for Rocksmith 2014. 😀

Just because you had a good week doesn’t mean you can slack off. It’s your duty as the keeper of the world of music games to give us what we DESERVE.

What the fuck is this? Slash is one of the worst musicians in human history!

We deserve better than this. Get your shit together.

So what do you want?

He wants a raise so he can go live under a fancier bridge. Seeing as he’s still here, I guess this site’s administrator wanted to keep him around for laughs.

His outrage has become like part of the furniture round here, I’d miss him! 😀

Yay David Lane is back with his usual tripe comments. You are cconsistent if nothing else. I’d actually miss your pretentious ramblings if you wasn’t around.
with the amount of money you have saved on not buying dlc week in week out, you should be able to afford a new guitar by now. 🙂

I love you!
Reply to  David Lane

We love you, but we do not deserve.

you’re a crybaby, Slash is not good music? Of course that says the typical elitist metal.
Ubisoft will not hear you typing here.

I don’t think David Lane is much of a metal guy either. He’s shit on everything announced except Cake (which is pretty far from metal).

Yet I never hear examples of what he considers good… I’m starting to think that his favorite band is just called “GOOD MUSIC”… all caps.

I can see the merchandising now.

Who is ‘we’? I think it’s only you. Keep your thoughts to yourself. Especially stupid, degrading comments like this.

Right on Chris. I had no idea who Cake was, but actually like those quirky s.o.b’s. There’s a whole lot of “Dad Rock” that is GOOD MUSIC!