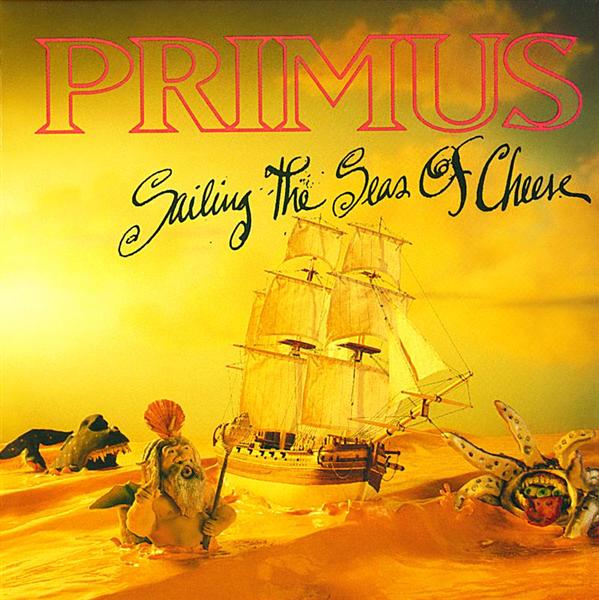 This week’s DLC is a four pack from the genre defying trio from San Francisco, @PRIMUS!

Primus is a led by Les Claypool a legendary bassist with an unusual penchant for fishing, unusual animals, @theresidents, and all sorts of backwood’s culture. Claypool’s vocal delivery is usually what turns people off from Primus as it sounds not so serious while their musicianship is anything but. Oh, and wait until you find out Primus has a Guitarist! Larry LaLonde is an often overlooked guitarist due to the incredible presence of Les, but make no mistake Ler has chops and trained under a pretty good guitarist.

The songs in the four pack focus on material before their 2000 hiatus, fans of Tony Hawk’s Pro Skater (and Rock Band 3) will surely remember Jerry Was A Race Car Driver, and of course joining it will be a highly anticipated hand-mangler, Tommy The Cat which also means Tom Waits is in a music game (right?). From Tales From The Punchbowl the quirky song that made an impact on The Grammys, it’s Wynona’s Big Brown Beaver! Good luck with that solo… Rounding off the pack is a 38 second song that seems to be perfectly timed with the announcement of @UbisoftStudioSF working on the new @SouthPark title!

The song will only cost $0.99 outside of the pack which means…

That’s right it’s four pack for the price of three!

aaaand they are all in E Standard

Are you ready to be destroyed by Claypool’s bass lines? Does Larry’s outlandish playing fill you with joy? Or is this just disappointing because you were hoping for Def Leppard (again). Let us know!

Guessing next dlc is Dio pack, Iron Maiden pack 2, or a various pack all songs having to do with Egypt.

A lot of the b string is on the a string with an octave effect. No 5 string but learning the fret board I guess.

I remember back around the first or second guitar hero, bands were only allowing cover versions of their songs in the game, and primus was one of the first bands to hand over an actual master recording. This band loves being progressive in the business and supporting their fans. If you guys want more primus, buy this pack and start requesting more songs!

The rest of the pack… HOLY CRAP THOSE BASSLINES!!!

Alright then, keep doing what you’re doing, just turn adblock off for me, thanks.

I love how nobody can leave a opinion on this site without some pussy putting his 2cents in… About 25% of you are cool and know what your talking about… The others look me up if ur ever in Pittsburgh so I can knock u the hell out!!

So you want to mouth off about a band and have nobody say anything? Or you just want to read people nodding in agreement with your opinion? Then you cap it all off with “meet me at the playground after school”

Come on dude, you can share your opinion here but don’t act like you are speaking for more than 5 people.

What a delightful person he must be to be around.

We all have different music preferences, which is why people think you’re pathetic trying to belittle people’s personal preference. Stick with your “25%” of people who think the same as you (the real number is closer to 1% btw) and stop trying to pick a fight behind a computer screen. You seriously think people care so much about your pathetic comments to go fight you? Get real.

Hey Ubisoft -- Take my money cause I’m buying all these songs on PS4 and on the Computer versions! If I had an Xbox I would even buy it again for that platform! Thank you so much for the Bass love!

I love how nobody can put a comment up without someone trying to belittle them…some of u guys r cool the rest are a bunch of bitches!!..feel me?

Don’t understand the Primus hate, it’s a good addition to the library from a band that’s well known but still somewhat obscure, nothing wrong with that…..Instead focus your hate to the fact that this game charges $7.99 for Dethklok, No Doubt and Duran Duran…

No surprises here about 70% to 30% in favor of this pack stinking up the joint… What’s next the blood hound gang or jimmys chicken shack.. 🙁

You shut your mouth when your talking about Jimmys chicken shack. They are a amazing band that is even better live and Jimmy Haha does a mean acoustic set and can sing amazingly with no with added effects.

Jimmie’s Chicken Shack is pretty awesome. I wouldn’t mind a pack of their stuff either. “Waiting” would be an awesome song to have in game. I agree about the acoustic stuff.

No John The Fisherman or My Name Is Mud…..argh!

No surprises here. It’s not a pack I would’ve personally made, but it seems like it will have some of the highest mass appeal Primus is capable of. Also, I know that whenever RS releases the first pack for any band, the song choices are going to be fairly vanilla. My only real complaint is the inclusion of the South Park theme. When I heard we were getting a 4 pack, I was hoping the 4th song would have a little more substance than that. Yeah it’s only $1, but I would have gladly paid $3 for 1 extra real song. I’m also a little sad there’s no Over The Electric Grapevine, but I didn’t really expect it.

I still will probably pick up the whole pack. It’s either this or no Primus to play for 4 more years. I can’t have that.

How could they leave out John the Fisherman? That was sure to be a lock! And a 4-pack with a 38-second theme song taking up a slot?!?! I like South Park as much as the next person but I wouldn’t put it in a music game. The least they could do would be throwing in My Name is Mud because…BASS, or to name a few:
.Last Salmon Man
.Southbound Pachyderm
.Over The Falls
.Shake Hands With Beef
I will buy the three but i sadly will not buy the pack

… But the South Park theme is free with the pack

Cool band… not even close to a good pack. Hopefully they give Primus another shot later on.

A pack with Tommy The Cat and Wynona is not good? For a music game? Lower your expectations a bit please.

I’ve seen pictures of your girlfriend, not sure you can set your expectations any lower 😉

Listen “Kramer” I’m sick of deleting your comments so how about you just get over the fact I edited a comment of you using homophobic slurs on here (which was months ago) and go back to participating in discussions like a normal human being. Or would you rather keep making personal comments towards me over a music game? Let me know.

Hmm, I don’t remember the homophobic comment, I just get tired of reading your pokes at people. I’ll leave out the personal jabs

I don’t think I really say anything out of line, I just make sure nobody is spreading mistruths, I’m into facts. Thanks though, that’s all I ask.

+1 for you Elliott. I’m gonna guess the only girl he’s ever porked, is his hand. Or maybe that female Mellon he stuck in the microwave.

The Mellon is still hotter than your mom, hands down 😉

I think it’s a bit ridiculous when people try to look for credit for “calling” obvious hit singles…just a pet peeve. More Primus songs would be cool, though I’m buying these.

(I’ll be hollering that tomorrow night.)

I wish there were deeper cuts. I like the 3 songs(couldn’t care less about the South Park theme song), but I’m still a little disappointed with it.

I steeled myself for some measure of inevitable disappointment, because I knew they couldn’t please all with every fan favorite. My rule was: if there is Tommy the Cat, I’ll consider it a win.

A true 5-pack would have made it gold. Maybe we’ll see some Frizzle Fry Pork Soda next go-round.

I guess I really shouldn’t be that disappointed to have Primus in game. After all, they are a really awesome band, and its not like these songs are bad songs. I’ve just requested so much of their stuff that I was hoping for MOAR!

I had a feeling South Park’s theme would be a part of the pack as a freebie or discount since it’s less than a minute long. It just seemed to make sense.

Robot Chicken theme would have been cool, eh?

Dude are you the same kid who complained a shit ton on the speculation post? Dude come on, you made a profile just to continue to hate on primus? Spending so much time on the negative, go play some damn guitar and come back next week , should be working on ur chops instead of continuing to chop at other peeps selections . You made ur point mooooooove oooooon , christ.

I think all UbiSoft/DLC haters should be banned based on their comments.

In all fairness, even the band admits they suck

Well, Ubi has released some of the worst packs they have released in the past few months. I’m sure Dan and the group appreciate your support, I’m sure it’s been embarrassing having to announce these packs

Genuinely surprised about the lack of “John the Fisherman,” but considering we got “Tommy the Cat,” I shouldn’t complain. 😀

*Wyona’s big brown beaver and Tommy the cat are DLC* Called It!

Yes yes and yeah!!! i’m so happy to see Primus in RS!! I have requested all the 4 songs, so I’m ok with the choice.. I thought the south park theme was too short to become a dlc, but it’s nice to see they decided to do it, and lower the price.. all good!

My wallet gets a week off, yaay. If this is your jam, do enjoy 🙂