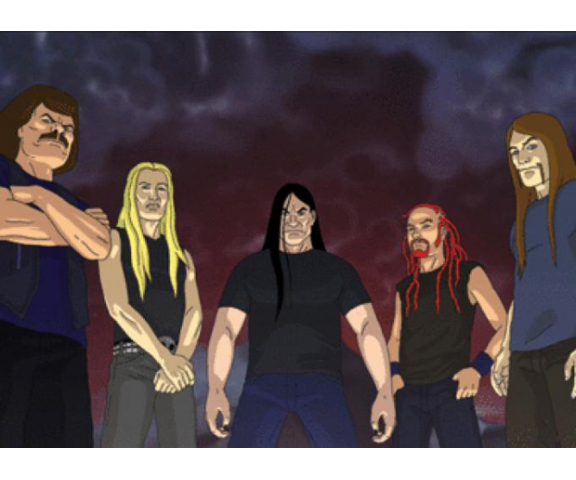 Whether you like Dethklok or not, this DLC is pretty important for a few reasons, but one reason in particular above all else. Back in December 2013 (only a couple of months after RS2014’s release) Metalocalypse creator/writer/guitarist Brendon Small, probably after being inundated with requests for his material on Rocksmith, tweeted the following:

Maybe if you guys ask nicely @Rocksmithgame they will consider putting in some Dethklok or Galaktikon or Doomstar…who knows?

Now, after almost a year and a half, we welcome an epic 3 pack of Dethklok songs. It goes to show that actually getting songs in to Rocksmith takes a while, but more so that the developers do listen! So if there is a song, or a band (or even a cartoon band as it turns out) that you want in the game – request it! Use the Facebook tool over here!

It is worth noting that this Dethklok DLC is tuned to C Standard. This is currently the lowest tuning in the game and with this comes some potential issues that may or may not influence your decision to buy this pack, mainly that tuning down this low will probably make your strings floppier than a wet noodle (and sound the same too). If you’re serious about becoming the new member of Dethklok it might be worth opening your guitar encyclopedia to the string gauge section. I’m not an expert when it comes to this but I’m sure there are plenty of results on Google.

One thing I first noticed about the bass charts is that two of them are picked (Go Into the Water and Thunderhorse). Now, as far as I know, these songs aren’t actually played with a pick, but you definitely can give it a go. The opening to Thunderhorse would require you to use a technique called galloping to hit those fast notes (bassist Bryan Beller has a good video on this). I really suggest you give fingering a go on this song as I found it infinitely more fun than just simply alt-picking the notes. Be warned, it’s a pretty non-stop attack of notes so ensure your fingers are suitably limber.

Awaken swaps the constant notes for a more melodic barrage instead. There’s still some long sections with no breaks, please don’t pull a finger muscle. I found the song really hits its stride at around 1:05 when the lyrics start up again. On the complete flip side, Go Into the Water is pretty slow and in my opinion is nothing special. That doesn’t mean it’s not enjoyable, it just sure isn’t compared to the others in my book.

While I didn’t really care for the bass on Go Into the Water I found it really quite enjoyable on guitar. The slower pace of things gives it a really nice sound, especially with the solos full of sustains and bends. In my view this is definitely the song to beginning with for all you Dethklok fans. Just make sure you’re up to speed on your mutes and your octaves and you should have no trouble at all.

Thunderhorse is where things start to get tough. A lot of it should be doable with enough practice – try to break down the riffs in to a simple finger pattern. It sounds stupid to state the obvious but it will really help you when you know which finger is going where at what time. The hardest parts of the song are the…well you can probably hear them in the song. I’ve yet to nail those particular parts but I’m sure it’ll be incredibly satisfying when I do.

If you thought those bits sound hard though, prepare yourself for Awaken. I feel like I might have nightmares about trying to learn that central solo, as well as all the other little fiddly bits. That sums this song up quite well actually. Fiddly. You’ll no doubt be putting a lot of time in to practicing this one, but understandably you might be put off by the difficulty. But it’s Dethklok, what else did you expect?

The Lead charts also have Alternate Lead (yay!). From what I can tell, the main difference is that a lot of the fiddly single note bits and riffs are played higher up. Feel like learning these songs twice?

I would highly recommend “DR DDT” Bass strings. They are super versatile. They are plenty beefy enough to handle C tuning, but I push them all the way to E standard as well. They are my day to day strings. They will really help those of you with drop tuning note recognition issues.

Tuning up on my 5-string worked too but I prefer the feel of the 4 string with drop strings… I only bust out the five string for F.F.D.P. and the like.

You’ll want to go heavy on the strings, guitar and bass.

Bassists with 5-strings might have it easier. Tune the bass a half-step up and use the bottom four strings. 5-strings tend to be heavier too.

Disclaimer: I haven’t tried this yet.

i have it works just fine