Yesterday, Dan posted this image of a note he found on his commute: 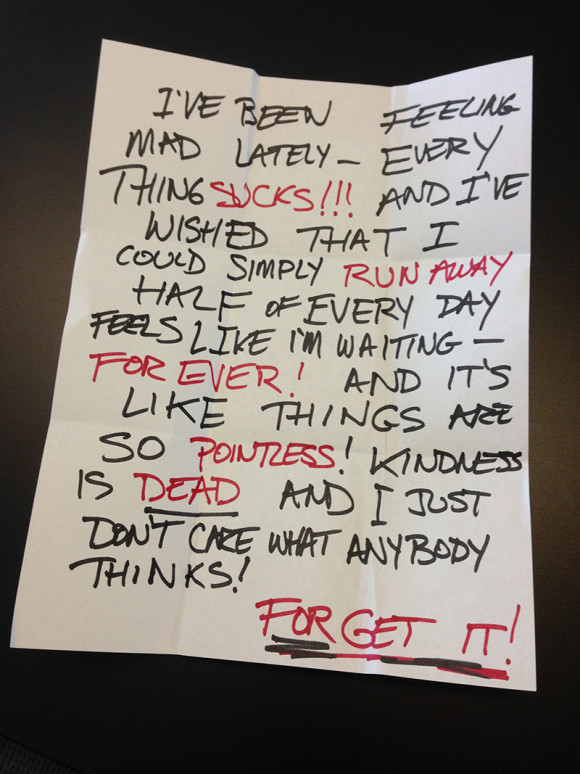 Initial speculation was thinking emo or possibly Limp Bizkit, until shihdo looked at how it was folded:

I think that may be the fastest a hint has ever been solved! 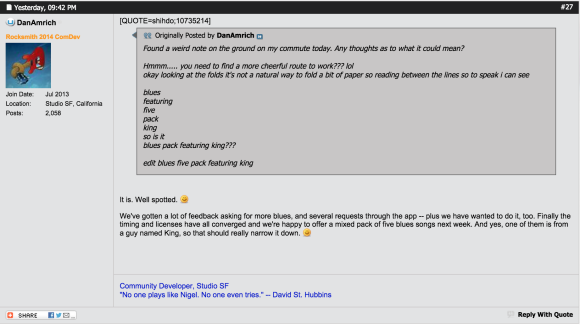 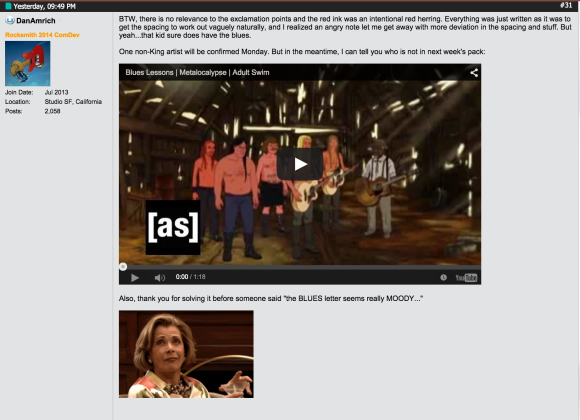 So, we know there’s going to be 5 songs, they’ll be sold as a pack, and one of the artists is a “king”. With that in mind, here’s what we think the pack could look like:

We have Albert, we have B.B., and that means there’s only one “King” of Blues Rocksmith has yet to feature! Featuring an absolute cracker of a guitar part throughout, Going Down would be the perfect way to introduce Freddie to the platform!

George Thorogood and the Destroyers – Bad to the Bone

John Mayer Trio – Who Did You Think I Was?

This’ll be a very controversial pick, but John Mayer is one of the most popular artists today and he undeniably has a very bluesy sound. His music is historically very hard to license, but PowerGig managed to lure him in with the promise of a real guitar, so I’d imagine Rocksmith would have no problem doing the same!

From very modern Blues we go to one of the originals. While you may hear this and just hear the simplicity, this song is absolutely perfect for a beginner guitarist looking to master the very fundamentals of a blues riff! Of course, being an absolute classic doesn’t hurt either!

Of course, you’d be hard pressed to have a proper Blues pack without the man Eric Clapton himself dubbed “the most important blues singer that ever lived.” We’ve got some older songs in the game before, but we’ve never gone back quite this far. Plus, this may be our first song to support a slide!

What do you think the pack could look like? Are you happy for more blues or is it not your cup of tea? Le us know in the comments!

I do. Judging people on music they like doesnt make sense to me. But whatever, judge away.

Johnny Winter is one of the five artists.

Wouldn’t mind Crossroads by Cream, although I’m pretty sure we’re not going to be getting any Eric Clapton songs again since Ubisoft completely omitted all his songs from the RS1 DLC. Always wondered why. My guess is he demanded ridiculous $$ to be included, and nobody was willing to pay. I love classic rock, but I wish the bands who are considered “classic rock” would realize they don’t have the same cultural significance they did in the 60s/70s and would adjust their egos appropriately.

Could there be any Limpbizkit in the future.

Next week, Charlie. Next week. I guarantee it.

Why would anyone want Limp Bizkit?!?

I don’t want to meet those people…

The reason to listen to Limp was the guitarist anyway. Pretty funky technique but worth contributing.

For sure george .. Bad to the bone is an all time great way and maybe MWMB will be my 2 favorites out of the bunch

Damn Right I Got the Blues!!! IT’S ABOUT TIME for some Guitar Boogie.

Alright starting off, while I do believe Freddie “RS’s missing” King does deserve a spot, my heart goes out to those of us B.B fans waiting for some good news. While I don’t want to see the day, the latest news shows 2015 may unfortunately be his time. I pray I’m wrong. Hope there’s another song on the way from him for RS. In fact what would be interesting is a five pack from the 3 Kings.

So how will Ubisoft go about this--all classic blues, modern/traditional, blues rock, or a mix?
My vote (based on requests via Ubisoft’s page) would traverse the through the history of the blues and be as follows:

While I like Muddy, more light needs to be shown on his rival.
Howlin’ Wolf -- Goin’ Down Slow (gotta play this one loud.)

In lieu of Hook and either Dimples, Chill Out, or Boom Boom, I’d put in Koko Taylor -- Wang Dang Doodle
https://www.youtube.com/watch?v=aVxMBAWr6Es

Blues Rock
I like the John Mayer call mentioned above. That really is a good track if you haven’t heard his Live at the Crossroads version. Outside of that

And the capper to Bring It On Home

The Ambassador of the Blues
Like that Howling Wolf track I mentioned, turn off the lights, sit in the dark and soak it in

How Blue Can You Get.

NOTE: In case you are following, yes, in the midst of my text, I through in references to quite a few other blues songs.

It’s not really a blues song, is it?

Would love to see Joe Bonamassa in the, slow gin, get back my tomorrow or different shades of blue. My prediction of the comments on Monday night

I would rather anything from Buddy Guy then John Mayer

Yeah I’m surprised this thing doesn’t mention one of the greats who also happens to be a “King.” There was no confirmation if the “King” clue only related to one artist either.

Also, what about some SRV or some Albert King? Nothing against Mayer but I would take any of the classic greats over him.

Bring on Gary Clark Jr.! He’s already got one song on Rocksmith.

his recent live album is awesome.

“When My Train Pulls In” from that recording would leave mortal men in tatters.

I hope bad to the bone in the pack =)

John Mayall did a live album which was a fusion of Jazz and Blues. It’s a hard album to find and I think all the YouTube excerpts have been censored. However, that album is excellent for guitar and bass, especially “Exercise in C major for Harmonica” Don’t let the name fool you, bassists well have a hell of a time with it!

I think they said the Bush song has a slide too.

Been waiting on some more blues.

George Thorogood and the Destroyers – Bad to the Bone?
John Mayer?

Jesus Christ, I hope not. I was so excited to hear about this pack and got totally depressed reading this page. Please be wrong.

Just speculating here! We have no idea what the pack will feature, other than an undescribed “King”!

I know. I just nearly had a heart attack reading those possibles when I’m thinking SRV and all the Kings…

The price of a rocksmith cord on Amazon is ridiculous! $45.49

I’m pretty sure Ubi sells it directly for 30 bucks..

looking forward to this one………Fastest solve ever?? get me lol

YEAH! Love me some more blues!

The title for the John Mayer Trio song says WHY Did You Think I Was, not the correct title “Who Did You Think I Was”. IF any John Mayer was included I’d vote for Man On The Side or Covered In Rain. Both are more blues influenced than most other JM stuff… although anything from the Trio would fit perfectly.

D’oh! Thanks for the catch!

I will definitely like whatever is in this pack. Any Thorogood would be great, John Lee Hooker would be better, but what I would absolutely love is anything off of Robert Cray’s Strong Persuader.

It’s a freaking sin that there is no NEIL YOUNG on rocksmith!!… Rockin in the free world and down by the river…c’mon ubisoft

I think sin is strong word to use.. i doubt they are purposely avoiding adding neil young.lol its not that big of a deal

this is not a request thread. Use the app linked at the top of the page to let them know what you want.

I would crap my pants if they included this, or anything from Cowboy Bebop, but probably not…
https://youtu.be/nftxDrStny8

FINALLY! So super excited for this one! It could basically be any real blues and I’m buying the whole pack!