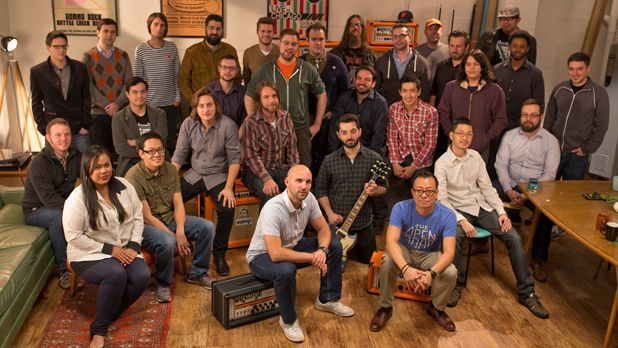 Rocksmith 2014 is out for North America!

Last week a few of the community members on YouTube, Facebook, and yours truly had the opportunity to not only receive the game a bit early, but also to participate in a Q&A Twitch.TV stream, live with the developers behind Rocksmith 2014!

Here are a few of the fun tidbits that I jotted down during the stream:

Nothing too crazy, but some fun things to think about. Stay tuned for DLC videos from this week, and of course our forthcoming full review of Rocksmith 2014

This is really interesting, You are a very skilled blogger.

I have joined your feed and look forward to seeking more of your fantastic post.
Also, I have shared your site in my social networks!

DLC….what we need is some DAFT PUNK….especially the more recent stuff where Nile Rogers was involved.

To teach funk and scratching and directional picking.

we should start a petition!

I don’t facebook or tweet, so feel free to suggest that idea to Paul cross and his team for me if you have there contact details 😀

Daft Punk? And people on here were rallying against Brittney Spears and Miley Cyrus…

think you better do some research on Nile Rodgers before making comments like that.

he is the grandmaster of Funk guitar.

you may feel like apologizing after a bit of research, or eyou may even feel like thanking me for enlightening you.

Nile Rodgers contributing to THREE TRACKS does not all of a sudden make Daft Punk a rock band. The game’s called Rocksmith, not MidiSmith. If you want some Nile Rodgers then petition for Nile Rodgers, not that dance club garbage currently being spewed out across the airwaves.

An apology and a thank-you are two things you will not be hearing from me.

You are fucking disgusting.

me or him? just curious 😛

Hopefully me. Nothing warms the cockles of my heart more than fits of blinding internet rage directed at me.

Like the blind internet rage you’re spewing on others? “I don’t like this particular band so I need to trash everyone who does.” Real mature… close-minded people like you are what holds music back. You wouldn’t have the likes of The Beatles, Pink Floyd, Hendrix, and what you would now call rock n roll if people didn’t push the limits of what music used to be.

Let the record show that I would fully support optional content from anyone, I just might not buy it right away.

I agree, and I apologize for putting down any DLC requests (I do not apologize for thinking Daft Punk are hacks though) because the more options that are available, the better it’s going to be for everybody. The last thing I want to do is come across to the developers as being picky or negative. I want them to put out as much and as varied DLC as possible, and shi--ing on everybody’s suggestions is a sure fire way to discourage them from doing that.

Although I have to show this off to combat your “Daft Punk are hacks” comment.

Does not make up for “Around The World”
😆

so your condemming the whole bands work, on 1 track…a little narrow minded, as elliot demonstrated with a non nile rodgers track.

would you prefer a full funk guitar riff song like “get lucky” which by many guitar teaching say its the song of the summer to learn….

Its called “rock”smith, but not all the songs are rock songs….as paul cross says in a interview…calling it Music smith just didn’t have a good ring to it…
can’t beleave I needed to point that out.

would you prefer Brittany, miley,

they want big names….and big songs of the summer…

you do the maths.

Jeebus, dial it back there a little pal. I don’t like Daft Punk and nothing you can ever say will change that. Obviously you do like them, and that’s cool. There are lots of bands I like that you probably wouldn’t, but I certainly wouldn’t give myself a cardiac arrest over it. Accept the fact that somebody out there has a differing opinion than yours and move on with your life.

get over it, some people don’t like daft punk. Jesus! It’s just a band at the end of the day

Got my shipping details from amazon uk today, cant wait 🙂 hopefully it arrives on monday..

Miley,taylor Xtina and britney 🙄 I thought he was a music fan, obviously it’s a more of a visual attraction thing then 😈

yeah who cares about making money and making the brand stronger

“Nao Higo wanted [REDACTED SONG] but they wanted way too much money, they were even one of the first songs on the build of Rocksmith 2011.”

Oh that’s a tease. Anyone have an idea of what song or band this is?

My guess is Rage Against the Machine….

is that woman on the left the mom? She said tell them to fix the tuner

Don’t continue commenting in this fashion, thanks.

Did they talk at all about the RS1 songs that didn’t make it into RS2014 and why?

Nope, just the hint it would be Clapton.

Cross’ argument is that those artists are today’s big selling pop artists, just like the Beatles, Kinks, Stones, Animals and the Who were back in the day.

So Metallica, Zep, and Floyd are not money related. Is it that they’re not interested? I could see that from Zep and Floyd but I’m surprised about Metallica. Unless it’s the GH Metallica that’s getting in the way.

Lack of interest, contractual obligations, unwillingness to be available for discussions, unwilling to associate their music with video games. Who knows.

Metallica still has about a year left in their contract exclusivity to guitar hero assuming they have it for the same length as Aerosmith did.

Jimi Paige and Robert Plant hated the idea of Rock Band to the point of being hostile. I forget which one of the two said it, but basically saying that integrating their music with video games would cause a dependance on them and not encourage proper guitar playing. While the comment was directed at rock band BEFORE pro guitar was introduced, the statement was more towards music video games as a whole and not just plastic guitars.

This one I’m not too sure about, but I do believe that Floyd just don’t want to license their songs to a video game.

One of them -- can’t remember if it was Floyd or Zep, and honestly it’s not important enough to me to look it up at the moment -- also refused to allow access to the master recordings as well.

Jimmy Page is famously protective about the master tapes for Zeppelin recordings, he would never give them to videogame developers. However, Rocksmith does not need master tapes (at least in RS2011, I’m traveling and still haven’t had the chance to install and play RS2014, much to my chagrin).

I believe it’s Zep that doesn’t want to release master tapes. They’ve also been pretty vocal about not wanting their music used in “games” but I don’t think they’re aware that Rocksmith isn’t exactly a game.

As far as I’ve heard, Floyd is a little finnicky with their music, going so far as calling it an “experience.” I think their egos are a little bit inflated. They claim the music is meant to be heard as an album altogether instead of as single tracks. I don’t see why that’s any of their concern but man that really grinds my gears. Can’t they see the fans love their music and want to play it? 😡

Well I guess I now know who to blame for a setlist that fails to reach my liking.

They absolutely should have brought you in as a consultant.

Are you disappointed at the lack of Miley Cyrus?

I don’t know, it could be helpful for introducing guitar to an entirely new demographic. I have nieces who would never play a Mastadon song, but would probably play a Miley Cyrus or Tayler Swift song until their fingers bled.

And maybe try something else because why not and find out they like that too.

It happened to me with RS 1, Music it’s a wonderful thing

Also, bring the Taylor swift songs, I don’t mind those as much. Cyrus I will never buy 😆

As for Spears, isn’t her stuff basically all MIDI sampling? Or is there a Band?

It all is. In fact, based on Instrumentation it’s not even music, but a series of beeps, clicks, and whistles organized in a monotonous pattern that is designed to incapacitate it’s listener by facilitating docility, lowered expectations, and general mind-numbing complacency. It seems to me that a game focused on learning a Guitar or Bass should stay away from “Hell-evator” music that is produced for the sole purpose of influencing young girls to grow up and be sluts that can’t manage money. What comes after this train-wreck would be Rapsmith and we all know that would suck harder than Alanis Morisette trying to get her stomach pumped. Let’s face it, Rock, Blues, and Metal are what the game should focus on. Not something that went through the Clear Channel approval process to get pumped on MTV in between Justin Bieber’s next bad life decision and Lil’ Wayne’s explanation of his artistic creativity. Am I right or am I right?

They probably wouldn’t be able to license Britney Spears anyway.

You are the winner of the internet my good sir. Well said.

So basically the only genres that are “artistic” are metal, rock and blues? Electronic and rap aren’t artistic? God, you’re an idiot.