Includes over 50 songs new to Rocksmith, including some of the biggest hits yet from alternative, metal, and classic rock.

More to be announced! 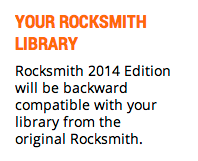 Session Mode seems to be a reactive virtual band within Rocksmith 2014. The onstage demo at E3 today showed Jerry Cantrell voice activating (Kinect) the game and changing the style of music as well as picking the instruments involved. Check out videos below to get a better understanding.

What follows is what Ubisoft has provided via their updated Rocksmith website. Since we haven’t seen the game outside of session mode for ourselves, we can’t comment, other than to say we are excited about these changes!

The Rocksmith interface makes it easy to see what notes to play at what time without the need to also learn sheet music or tablature charts.

WHAT’S NEW: The menus have been redesigned to be clearer, smoother, and blazing fast. The in-game interface has also been visually revamped to provide you with better feedback on your performance as you play.

Riff Repeater helps you practice by focusing on specific song segments. You can set your starting difficulty level, speed, or play note-by-note through especially challenging parts.

WHAT’S NEW: Riff Repeater is now fully customizable on-the-fly, enabling you to select your section, difficulty level, and speed simultaneously. It’s faster and easier than ever to nail that challenging riff.

Once you master a song, you can practice playing songs entirely from memory in Master Mode. It’s the ultimate achievement in Rocksmith when you’re able to walk away and play your favorite song anywhere.

WHAT’S NEW: Master Mode has been revamped based on your feedback to be a more approachable way to learn songs from memory.

By turning your TV or computer monitor into an amp, Rocksmith also simulates thousands of dollars’ worth of custom amp and pedal gear. It’s a comprehensive guitar gear collection. Utilize your armada of tools with multiple tunings and master tons of techniques through interactive lessons to create your own unique sounds and riffs.

WHAT’S NEW: Rocksmith 2014 Edition comes with an even wider arsenal of in-game gear through our partnerships with Orange, Marshall, and Eden.

What We Need To Know 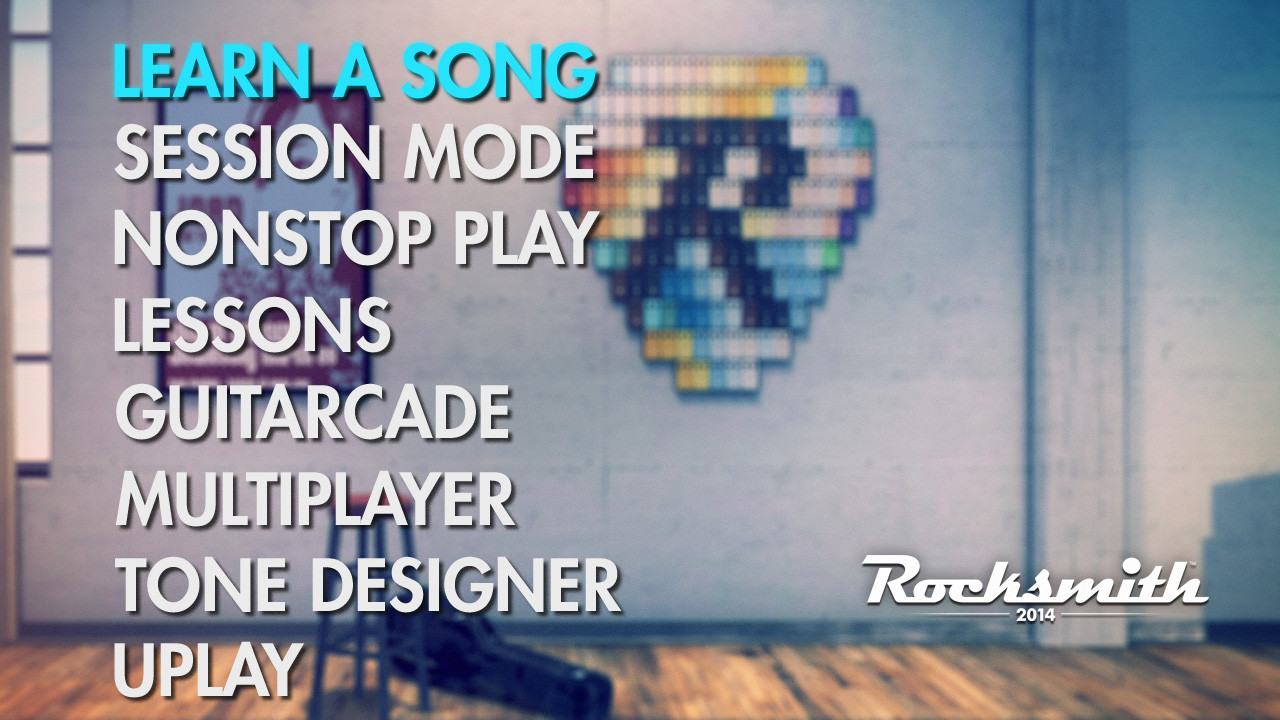 Rocksmith 2011 (sure let’s call it that) didn’t have UPlay. Seeing that phrase there is definitely going to scare some people with it’s DRM, Always-On, and all that stuff people seem to dislike. Will Rocksmith 2014 no longer be a Steam affair? If that’s the case how is the PC DLC going to be integrated? 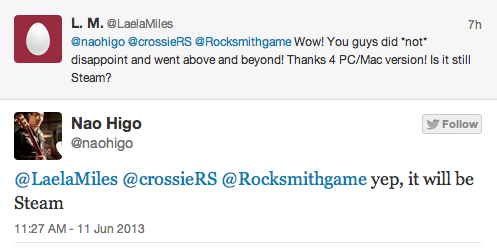 Is this Ubisoft’s version of All Instrument Mode/Party Play?

Update from the FAQ:

I see most people concerned with lag deficiencies for the game. Paul Cross has said there’s nothing more they can do for that it’s all how the users setup is. I’m more concerned if Rocksmith 2014 improves note/chord recognition.
I think that the Rocksmith 2014 team should keep updates going weekly for all the die-hard rocksmith faithful like me who preordered the first one, got it on release date, buy the dlc, and play regularly. I wanna see interface and gameplay soon whether it’s an original rocksmith song or one of the knew ones announced. I think we have all seen enough of the new session mode. 🙂

I assume they haven’t said anything about optionally not using dynamic difficulty? I bought RS, but don’t want the song to get harder on me until I am really ready, and I choose 😀
Still sticking with RB3 for now…

Nice coverage, guys. I was curious if you have heard anything about how Rocksmith 2014’s interface will affect colorblind players? Or if the concerns and needs of colorblind players have been addressed or considered by the design team?

This would be a great question to be answered, I have to assume that with the feedback from Rocksmith 2011 they most likely have implemented some sort of colour altering feature.

I made sure this excellent blog went to the right people last year, let’s hope the issue has been addressed in Rocksmith 2014

Nice. Thanks for the link, Elliot! Please keep me updated if you hear anything.

Hey, I know this is a bit late but I’m one of the developers working on Rocksmith 2014 and, in fact, the programmer that worked on colourblind support in Guitarcade. We have definitely taken colourblind players into consideration and while colourblind support is mainly limited to the string colours on the guitar, noteway and characters, you should have no problem navigating and browsing through the interface in Rocksmith 2014.

And in case you don’t believe me, have a look here (near the bottom); http://rocksmith.ubi.com/rocksmith/en-us/returning-players/index.aspx

Never too late! Thanks for dropping by, looking forward to seeing this mode in action 🙂

I’m totally psyched about this. I would like to see at least a little clip of the interface and gameplay before I preorder this, but I’m sure I’ll still preorder this ASAP. Just throwing this out there: I love the dynamic difficulty but I think for this new version you should be able to control difficulty yourself. If I’m an expert guitarist or even an intermediate guitarist I should be able to jump into “all the small things” maxed level from the start. Also we need a lock function on difficulty levels too cause I’ve had “outshined” mastered for awhile but every time I play it the verse drops down a level to where part of the verse is single notes.

Seems they got every single issue on current rocksmith and worked it out to release the best guitar game ever! Setlist seems to be very good also… And the ability to import ALL songs… Awsome! Finally… AiC!!!!!! How long till october???

Chances are lvlNinety9 is right with the pedals and effects, but i was hoping we could spend saved up points on more songs! Chances are thats not true, but i thought that would be awesome.

So, any word on when we are getting more DLC?

Not as of yet

No new DLC until October is a bummer!!! 👿

Personally I’m glad that they’re releasing it for the current-gen systems. I don’t plan on buying one from the next generation since they’re screwing over their customers so bad.

Also, I don’t know why people doubted that it’d end up back on Steam, or for that matter why anyone would care. Do you have something against not giving money to Valve every time you buy a PC game? Not to mention, do you really want to give Stream an even bigger monopoly on PC gaming than it already has?

loving what I’ve seen but want to know what HAS’NT been changed for the new game.

So… what about delayed DLC?

I’d expect it to resume in July

Love the UI improvements, fuck UPlay. But I guess we’ll have to wait for exact details on what it’s going to do. Maybe they’re using this as a way to manage your whole DLC library, so if you buy a future version of Rocksmith, you could access all your DLC no matter where you bought it.

That would actually be pretty good IMO. The PC platform is nice and open, but the downside is that it doesn’t have a single system for managing DLC. This usually isn’t an issue, except when you have games that act as platforms themselves such as Rocksmith and Rock Band and such. You need to carry your DLC library over to the next game somehow.

I’m also guessing it will be in addition to Steam. There’s no reason they can’t have UPlay on top of Steam. Plenty of other games do it. Ditching Steam would be a huge mistake given the exposure to sales and integration of DLC for existing customers.

Well they could have incorporated Uplay to give you credits when you hit certain things to get different amps or pedals and such like they did with the other games. Doesn’t mean it is a bad thing and could be potentially good.

Hi All my content is on steam to, I hope they let us import from our steam content.

I am hope they do not ditch Steam. Otherwise no sale….

I was really hoping that this would be on the PS4.

Just when my PS3’s HDD fails on me, and it’s time to get a new one, Rocksmith 2014 edition is announced. Rocksmith is already going to be in some steady competition with BandFuse. And with Rocksmith 2014 coming out in October, there’s not much time to start saving up. :O

I’m waiting for Mike to ask “where’s the metal?”
😆