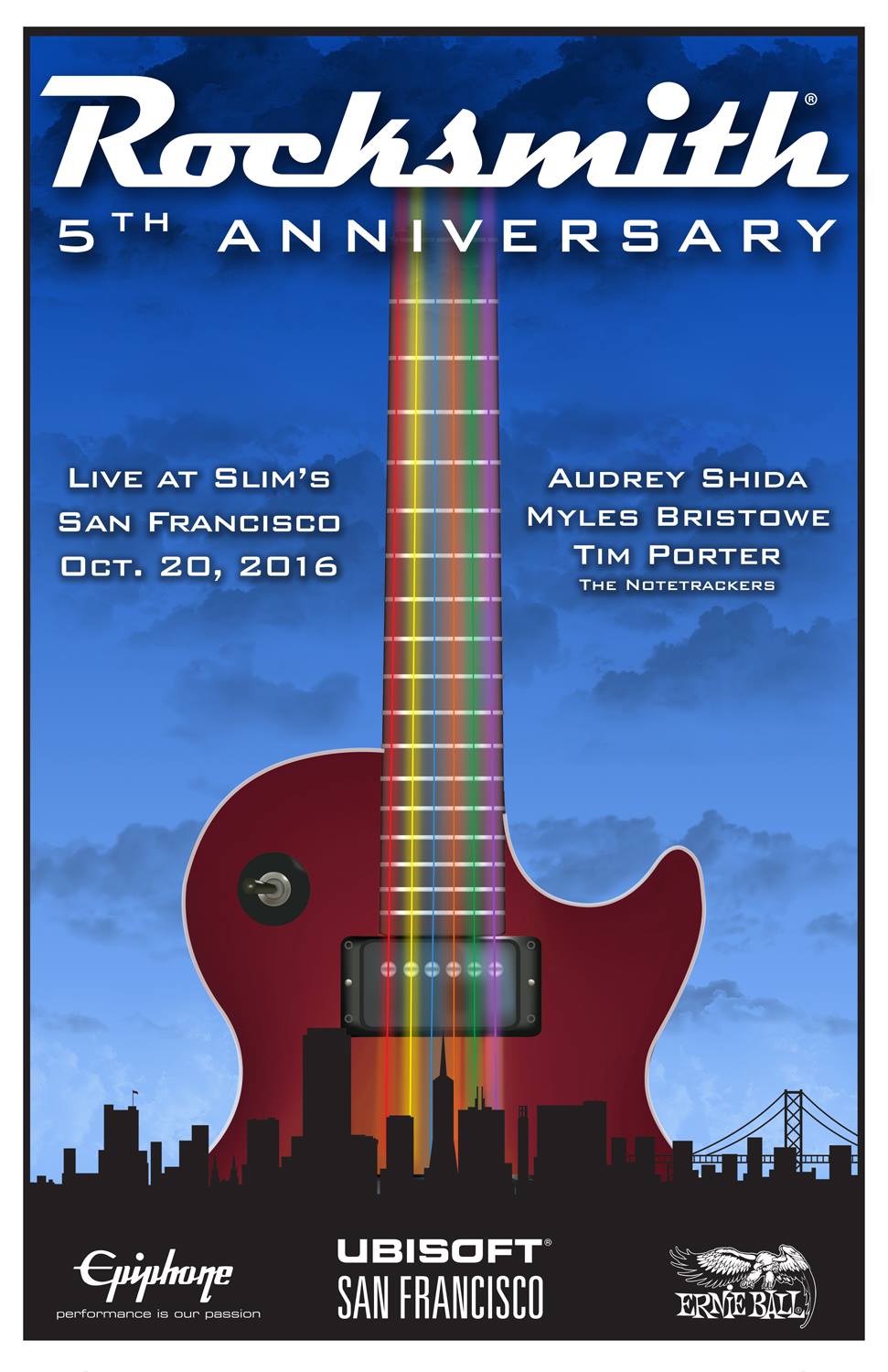 If you’ve been following us on twitter you have probably seen numerous RTs from @Rocksmithgame and @UbisoftStudioSF regarding this week’s 5th anniversary celebration of all things Rocksmith!

Has it really been five years already? The original Rocksmith debuted on October 19, 2011 – and poof, 60 months and 900 songs later, there are a few million more guitarists in the world than there used to be. (You’re welcome.) And you know what they say: Time flies when you’re having ROCK. It’s not a sprint, it’s a ROCKathon. If you don’t stop and ROCK around once in a while, you could miss it. None of these clichés about the passage of time work. Whatever. You know what I mean.

To celebrate the fifth anniversary of Rocksmith as a franchise – and to toot a few extra horns in honor of the release of Rocksmith Remastered, which brings a whole mess of new and improved features to our loyal players, absolutely free – we’re throwing a free concert. You probably heard about it here on UbiBlog when we asked the Rocksmith community to share their success stories. Well, that worked – we’re welcoming Myles Bristowe, Tim Porter, and the incomparable Audrey Shida to the legendary stage at Slim’s, where they will make their San Francisco live performance debut – without the game as a safety net, fronting a real band of real pro musicians in a real live venue. It’s a one-night-only, once-in-a-lifetime experience for everyone involved. And we’d like you to be there.

It’s going to be fun to celebrate Rocksmith as a franchise, but we want to use the occasion to help a worthy cause, too – so we’re hoping you’ll donate to the VH1 Save the Music Foundation, which is just as passionate about music education as we are. Our friends at Epiphone and Ernie Ball have kicked in some sweet gear to help the fundraising effort, too. Who knows what you’ll take home?

All we need now is you. Join us at Slim’s on October 20, 2016, at 7PM for an evening of music, memories, and making a difference. Click here to claim your tickets, but keep in mind attendance is limited by the size of the venue – only a few hundred people will be allowed through the doors, so please don’t take tickets unless you can commit to attending.

Seriously – the Rocksmith Remastered upgrade and this free concert are our way of saying thank you to all of our Rocksmith players for five years of support and success. It’s going to be a great time – and as the saying goes, there’s no ROCK like the present. Argh, never mind. We’ll see you on the 20th.

Awesome! So if you are in San Francisco this week you could definitely attend!

Or if not you can just submit questions via the comments for me to ask @Audrey123Talks @MylesBristow @TimathusMusic or pretty much anyone at @UbisoftStudioSF since I will be attending this great event!

Feel free to also ask questions via @TheRiffRepeater and our facebook page.

Note: I realize there are a lot of issues with the new Remastered Update but please be respectful in your questions to developers here. Also if you have issues please take the time to report in detail on the official forums

Did I hear you say full coverage?

Well, I’ll try to film as much as I can. If they have wifi I can just Facebook stream the whole show

The Riff Repeater awesome, good luck the whole overseas RS community is relying on you! No pressure…

I look forward to meeting you.

Just want to say thank you to Rocksmith cause without it I wouldn’t have found one of my passions in life, playing guitar. They made it fun and easy to learn cause otherwise I don’t have the patience to learn in the conventional matter. Now I’ll play guitar for the rest of my life. Music soothes even the savage beast. Still waiting on a Trivium pack tho! Feed me METAL!

Q to Ubisoft: There have been threads about how RS has exposed people to new bands. Have bands approached you about putting their song in RS for publicity purposes? Have there been thoughts about spotlighting new artists by including one of their songs (say 1 new song/band every 2 weeks at a discount)?

Q to the folks playing: How difficult did you find it “cutting the cord” and playing without RS the first time?

I can’t thank the team at Rocksmith enough. In the last 5 years since I got the first iteration of Rocksmith on release day, my playing has improved drastically.

My only question for them is: Can we please get some BUCKETHEAD DLC?!

Buckethead is incredibly hard to even get on the phone. Would probably have to get Bootsy to help with that

Well if you get Bootsy on the phone, ask him to talk to George Clinton as well.

Got to add another note. In honor of the 5th, I’m taking the time to say thanks to UbiSoft for the hard work in getting our favorite artist/songs on the game. There is DLC available for most musical tastes. (yes we are lacking some key genres and leaning to heavily in others but lets stay positive) They’ve done a pretty good job over the years of at least touching on a wide variety.

Adding this as I thought it’d be fun.

1) Exodus -- Bob Marley & the Wailers
2) In a Silent Way -- Santana
3) Guerrilla Radio -- Rage Against the Machine
4) How Blue Can You Get -- B.B. King
5) Running Down a Dream -- Tom Petty and the Heartbreakers
6) Super Bad -- James Brown
7) Magic Man -- Heart
8) Gimmie Shelter -- Rolling Stones
9) Yellow Ledbetter -- Pearl Jam
10) MAGGOT BRAIN -- Funkadelic (ok so Funkadelic hasn’t been on but Parliament is pretty-much the same outfit

20 years man that would be something as long as my PS3 still works. I didn’t think they would ever approach 1000 songs but they are here for the long term at least I hope. Here’s to another 5 and beyond

There are a few million more adults and children with a new found respect for music that is not only before their time, but also outside of a collection of artists they’d normally listen too.

In addition, I present the following:

Testimony 1) I’d never heard anything by the Black Keys prior to Rocksmith. They are now the most played artist on my console.

T2) My father passed down his love of B.B. King to me. I’ve used Rocksmith to help introduce my kids to actually playing the blues

T3) I listen to a lot of Bob Marley in the house. Thanks to Oct ’16 DLC my kids want to play his songs.

T4) My son is craving my James Brown. <—That's from Rocksmith

T5) I can sit down now and play music with the kids. First songs we learned "together": Spoonful -- Howlin' Wolf, I Won't Back Down -- Tom Petty, All the Small Things -- Blink 182, and My Generation -- The Who.

So in conclusion, Rocksmith, 2014, and Remastered has helped create another avenue for family time.

As far as the testimonies, I can go on and on out how it's help me.

“There are a few million more guitarists in the world then there used to be”………… and like a dozen more dedicated bass players at least. 😛 Lol