On September 19th after getting a request on twitter for Baroness, Creative Director for Rocksmith Paul Cross (@CrossieRS) replied with the following:

SomethingAwful forum members, Fina and @Kaboobi discovered some interesting file names in the index for the Rocksmith Steam Beta.

As you can see from those images (care of @ravagetalon) there are some interesting songs listed such as:

Also you may notice that three songs from next week’s DLC are listed (Paris, Bright Lights, and Caring is Creepy)

As you remember “Nightmare” had been released accidentally in August so this is definitely confirmation that we’ll have a Avenged Sevenfold Pack in the near future!

Rush has been a widely requested band on Facebook and Forums, so a 6 PACK is definitely going to make people happy. Especially with a song off their new album, Clockwork Angels. 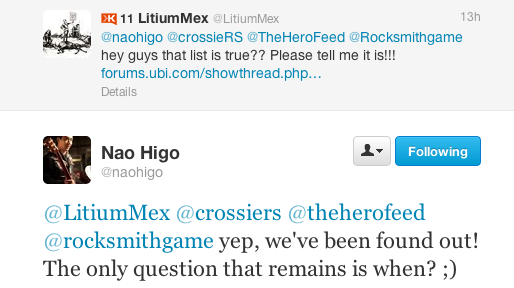 Certainly great news for music lovers, checking the Rush and A7X DLC from Rocksmith PC, perhaps, this should be a worthy deal for anyone. Though I haven’t tried it, but I am sure I am going to have a good time trying these.

I'll buy that rush pack the second it comes out!

Nothing to really get exited about for me. Not the type of music I listen to anyway. But to each there own!

Confirmed -- A7X pack will come out on October 30th.

Learn how to read tabs. I like the game too but Jesus Christ if you want to learn a song just get online and find the fucking tabs. Rocksmith isn't the only way to learn a song.

Oh hot dayum. Dat bass is gonna get a workout!

I for one thought that RUSH should have been released with the bass DLC. Geddy Lee is one of the best bassist out there. Will be very happy when this comes out.

Thank you for asking about me, Amak.

My only complaint is no Caravans.

I'll be happy when they're actually released.
No wait I will never be happy, Give me unholy confessions and strength of the world, then we'll talk

Well, at least you're honest

Are you guys happy now? Will you stop complaining?