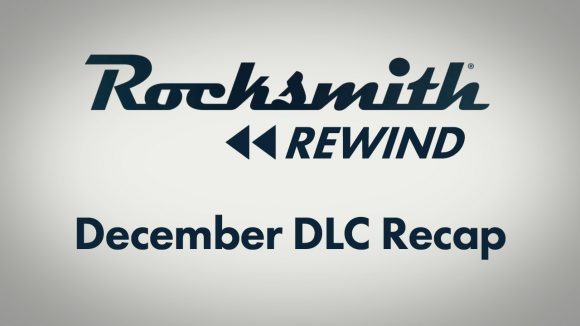 It’s the middle of the year and for many of us our Summer plans have been cancelled. The only logical thing to do next is to look forward to Winter. I did one better and looked backward to Winter. More specifically, I looked at all of the December DLC offerings from Rocksmith’s history. Which ones come out on top? Which ones felt more like Meh-cember? Let’s find out! 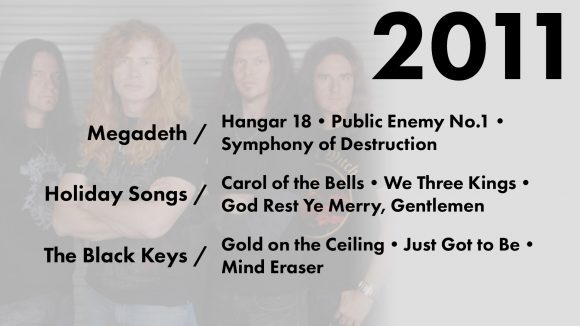 December 2011 came only two months after Rocksmith 1 launched in North America, but it managed to include a free (now impossible to obtain) pack of Holiday Songs. The Black Keys built upon the two on-disc songs they had, and Megadeth brought some much needed crazy guitar-work. 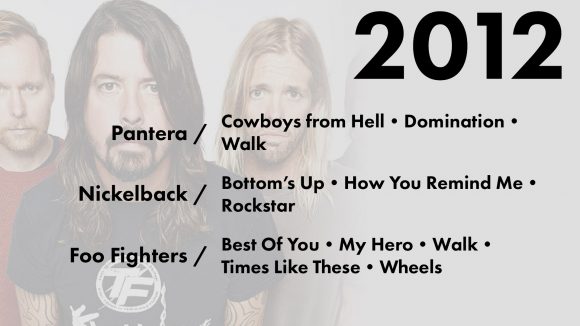 December 2012 was the first time Rocksmith DLC went weekly, and to celebrate they released three pretty guitar heavy packs. I couldn’t imagine the game without those Foo songs! 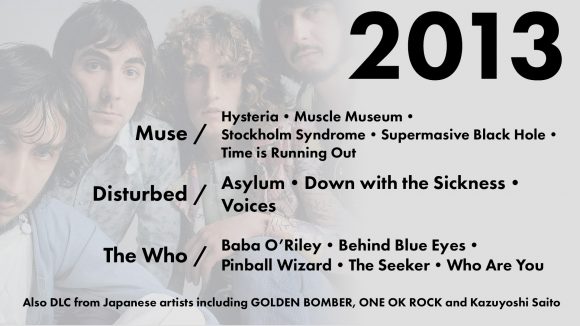 December 2013 was the first December after Rocksmith 2014 launched in October 2013 (confusing or what?). A great continuation of some on-disc artists, but potentially missing a couple of hits. Don’t sleep on that Japanese DLC! 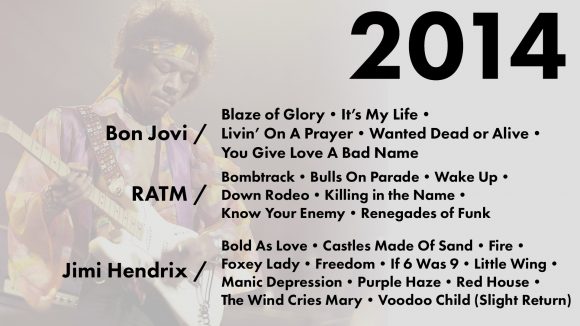 This is it. The big one. A legendary December that we will tell our grandchildren about. Starting off strong with a Bon Jovi 5 pack, continuing on with a Rage Against the Machine 7 pack, and finishing with a crazy Jimi Hendrix 12 pack. 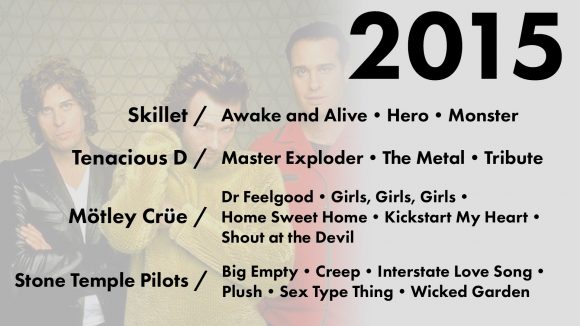 Another great December, but bittersweet as STP’s Scott Weiland had sadly died on the 3rd. An unintentional way to honour him and the band with a strong 6 pack. Skillet, Tenacious D and Mötley Crüe help pad out a really good month for guitar. 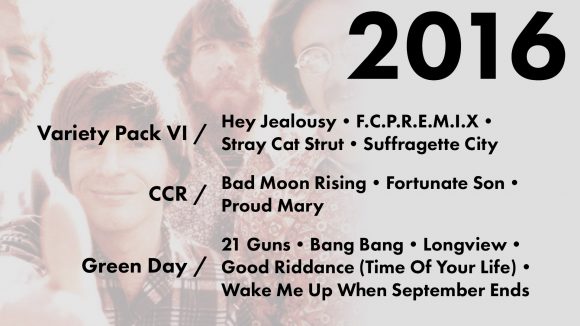 The first December Variety pack, and a Bowie song to boot! Creedence Clearwater Revival brought three of their hits to the library, and the year ended on Green Day’s second pack. 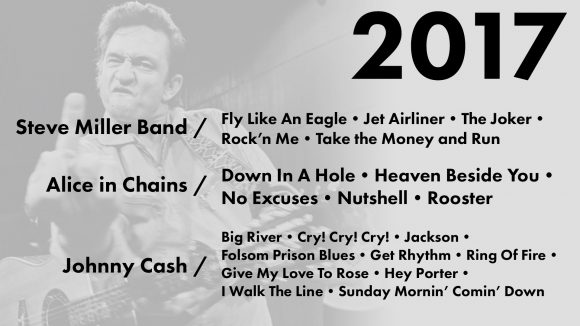 2017 was clearly jealous of the attention 2014 received and gave us its own mega pack, this time of country legend Johnny Cash. Steve Miller Band and Alice in Chains help add some diversity to the month, but the Cash Pack is the clear star here. 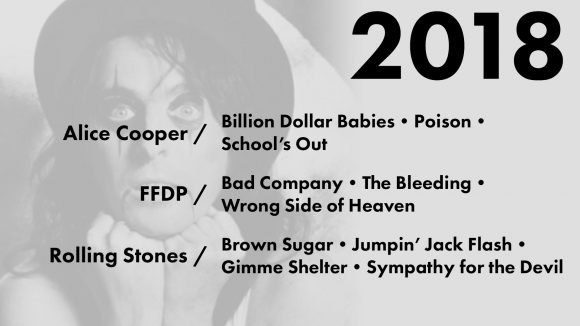 A blast from the past or what? Alice Cooper and Rolling Stones, two artists who hadn’t been seen since their on-disc singles in Rocksmith 2014, returned strong with some of their hits. It’s not quite mega pack levels for the Stones but 4 songs definitely was welcome after the lack of 5 song packs throughout the year. 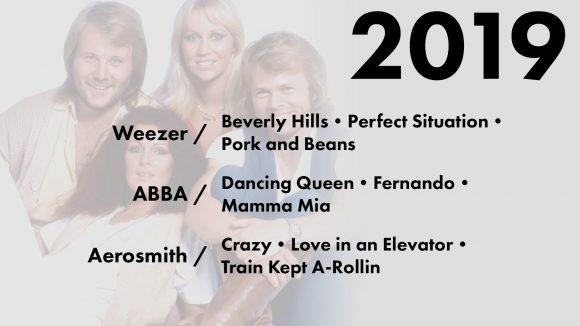 2019 ended with Weezer’s second pack, a totally out of the blue ABBA pack, and the return of Aerosmith after their January 2014 pack. 5 years between packs? I guess licensing really is hard…

So which December is the King of Decembers? Are you an instant fan of 2014 with the massive packs we were given? Maybe 2016 with those Green Day hits is more your style? Or are you an out-and-proud Nickelback fan and swear by 2012?

For my money, I really liked 2018. The Alice Cooper pack on bass was great fun, as was the Rolling Stones pack. Five Finger Death Punch, a band I didn’t really know of before, surprised me enough to put this whole month at the top of my list.

2017 for me. AIC is an all time great pack and good for most skill levels.

I’d like to say the year 2017 was the GREATEST single year of DLC, for me. Seriously, the run that Ubisoft was on actually started in October 2016 and carried on through to the end of 2017. That amazing run brought in The Jackson 5, SRV, Booker T and the MGs, Pearl Jam, Bob Marley, Huey Lewis and the News, Alabama Shakes, the Four Tops, Steve Miller and so much more. No other year comes close to 2017, for putting out something for everyone and for presenting such a healthy mix of music styles. Sadly, while December 2017 was really good, it can’t, nor can anything else top, December 2014.

To get both RATM and Jimi in the same month was mind altering. Add to that Bon Jovi and the number of songs from all artist in just that one month, and you have someone who doesn’t need to pay attention to weekly DLC for at least 6 months. 2014 felt like such a satisfying end to the year. It seemed like (just to me) Ubisoft knew not to try to top that, and fortunately never tried. Our heads might explode.

Seriously, can you imagine a December where we see a 7-pack from RHCP, a 5-pack from No Doubt, a 7-pack from ZZ Top, and a 7-pack from AC/DC? (This year does have 4 available weeks in December.) Note: I picked those as the artist either have DLC on Rocksmith or on some other music game. Didn’t include Van Halen because…………well………you know.

2017 was a fantastic year. Plenty of packs for returning artists, some great variety packs (Skater Rock!). Sadly I think a year retrospective would be too much for one article/video