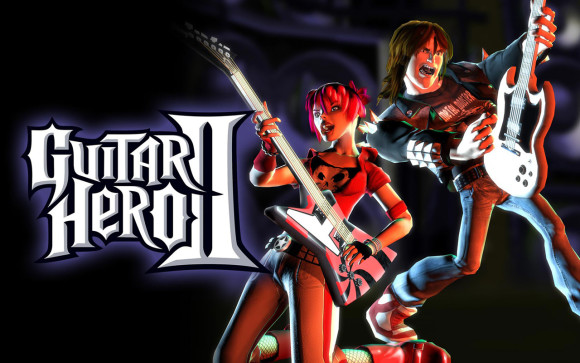 Widely considered to be one of the greatest rhythm games ever made, 2006’s Guitar Hero II is a beloved entry in the franchise. The first sequel to Guitar Hero, we’d still be a little bit away from the peak of the franchise in both sales and pop culture penetration. Guitar Hero II was also notable for being the first game in the series released on Xbox 360, where a few extra songs, as well as DLC was also introduced (a feature that would remain a constant in the genre for years to come).

The setlist was still predominantly made up of cover versions, but a few of the main setlist songs were now the original master versions. Spanning the early 60s all the way through to 2006, if you were to poll rhythm game fans on what the best setlist of all time was, you’d likely find this right at the top of the list.

Of the 48 song main setlist, 27 are currently available in Rocksmith, or 56%. In addition, the original Kinks version of You Really Got Me is part of Rocksmith 2014’s setlist. Of the 26 bonus songs, 2 are available in Rocksmith. This means that of the total 74 song setlist, 29 are playable for 39% total completion. This makes for a slight increase over Guitar Hero 1’s 35%.

In addition, there was the aforementioned DLC, a first for rhythm gaming. While most of it was just repeats of the first Guitar Hero’s setlist (a foreshadowing to exports, perhaps?), there was also a decent array of indie and major acts.

It was incredibly difficult to narrow the GH2 list down to just ten songs we wanted, but here’s what we came up with.

How have we only gotten the one Alice Cooper song? I was sure that in the early RS2014 days of getting packs for the major on-disc acts that an Alice pack was coming, but alas it never happened. One of the iconic hits of the 70s, this song would provide great guitar work for the game.

The first “impossible” song in franchise history, Jordan has become almost synonymous with Guitar Hero II, and the early score chasing scene as a whole. Just imagine the challenge of getting this on real guitar. The techniques you could be taught as well would be incredible. I mean, the tones alone would make this a dream.

If you don’t recognize this one by name, you’ll almost certainly know it to hear it. We have a couple good Deep Purple songs already in the game, sure, but more would always be welcome. Especially the under-appreciated pre-Machine Head stuff that rhythm games seem to always ignore.

Iggy Pop and The Stooges – Search and Destroy

Iggy Pop has appeared in countless rhythm games and is an absolute legend in the punk world. It’s only a matter of time before we get to see him come to Rocksmith, and I can’t think of a better place to start than with one of his most well known songs.

I know I was disappointed that the recent Jane’s Addiction pack didn’t feature this song. One of the greatest songs Jane’s Addiction ever performed, it’s about time we see this pop up in games again.

How has this song never appeared in a game after this? Especially considering we know there’s no master issue. The first Primus pack showed just how great Primus’ basslines are to play, so more of that certainly wouldn’t go amiss. This song, along with Too Many Puppies and My Name is Mud, would be welcome additions to the library.

A great high-level guitar showcase, this song would fit in nicely with the player-base who are looking for more of a challenge. Hopefully next time we get a rockabilly pack, we see this make an appearance!

Stone Temple Pilots – Trippin’ on a Hole in a Paper Heart

Yet another case of “I can’t believe this didn’t make the pack”, this is one of Stone Temple Pilots’ most well known and beloved songs. While recent events may complicate licensing, one can only hope we get more STP in the game, and that this is the first song we get.

Anyone who’s been following these articles where we wish for songs knows that I’m a massive hardcore punk fan, and I think that Rocksmith is sorely lacking in that field. Come on, Ubisoft! All I want is a Peps-er, uh, Suicidal Tendencies DLC!

Give me this, Whiskey in the Jar, Call the Police, Cowboy Song, and Saga of the Ageing Orphan and you’ve got all my money, Ubisoft. Thin Lizzy are a fantastic band, and while the three pack we got was great, I’ll never turn down getting even more from them!

There’s our picks, what songs would you like to see from Guitar Hero II end up in Rocksmith 2014? Besides Guns n’ Roses that is…

Drist, and Count Zero, God that brings back memories!!! To have them in RS would be really Sweet. ??♥️

I’d love to see Sin documentos, Can’t You Hear Me Knocking, Even Flow, and Trippin on a Hole in Rocksmith!

Wasn’t the A7X pack released in 2012? Like right before the Rush pack? I think it was released for Halloween.
Also Buckethead 8-pack!
(And an Alice Cooper 8-pack)
[and a Primus II 5-pack]

PJ-10 (could have guessed that)

Any pearljam and Van Halen would be welcome to rocksmith.
Instead we get collective soul?… Our dlc money hard at work.

YYZ
Reply to  PJ-10 (could have guessed that)

I hope you realize that it’s our money and that we spend it on whatever we want. We spend it on things we like. Like this game’s DLC. We don’t have to not buy something because you don’t like it. And that’s what you need to realize.

Pretenders, Van Halen, Danzig all get my vote.

Just give us all the Nirvana, Red Hot Chili Peppers, Ozzy/Black Sabbath, and Metallica songs from the music games No questions asked. We will take them all. Seriously why don’t we have a Nirvana or Chili Peppers pack yet?

WRT the Chili’s, I believe there are licensing difficulties since Frusciante no longer believes in profiting from their music.

When do we get the Strong Bad 12-pack?

I would love to see the Butthole Surfers, Shadows Fall, Soilwork, Trivium, Reverend Horton Heat, The Living End, Pearl Jam, Stone Temple Pilots, Deep Purple, Primus, Buckethead, The Sword, Matthew Sweet(would love a whole pack), Black Sabbath, Alice Cooper, Danzig, Valient Thorr, Voivod, and Incubus songs make it to Rocksmith. I’m sure some of these would have problems with tuning being too low, and I wish there was a way to fix this, but all of these songs would be amazing.

Gotta disagree, I saw ST live with the bassist that just passed away. One of the best live shows and guitar insanity I’ve seen from a punk /metal band.