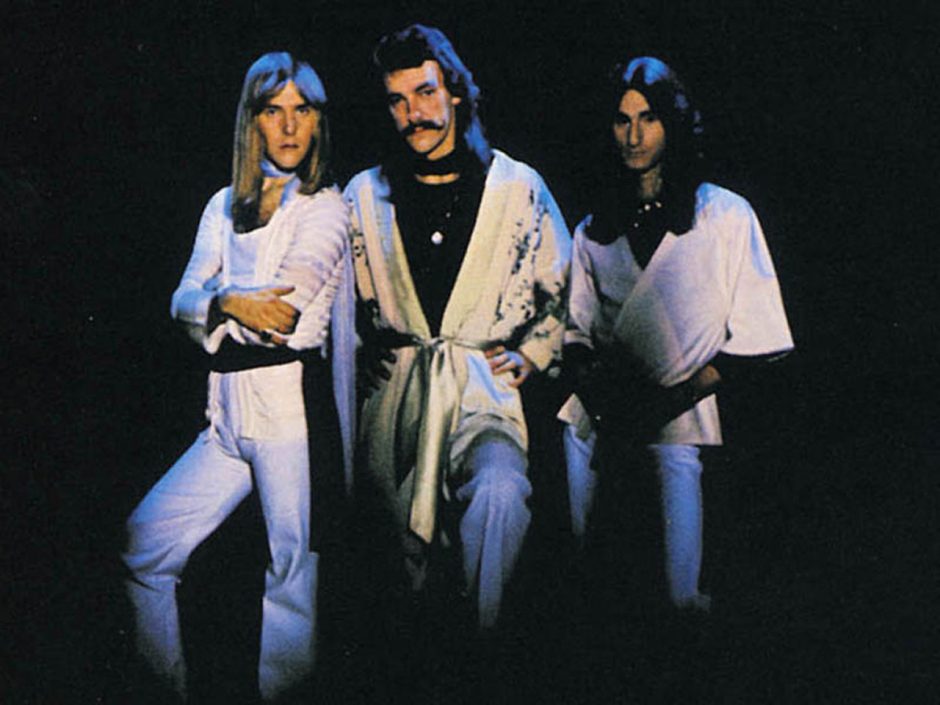 It’s that time of week again and @UbiParadise has put up a clue that he’s super excited about. Let’s see what all the fuss is, shall we?

Quickly people figured out the maze:

And then cipher shift.

But what could Cold Spring Montecito possibly mean?

Well that was quick. And that leads us to: 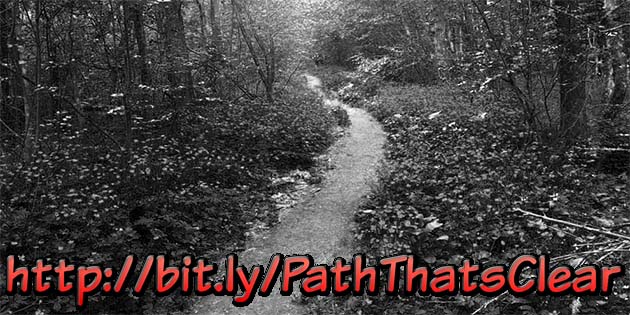 Follow that link and you’ll be taken to the following:

And then Jason made it official. 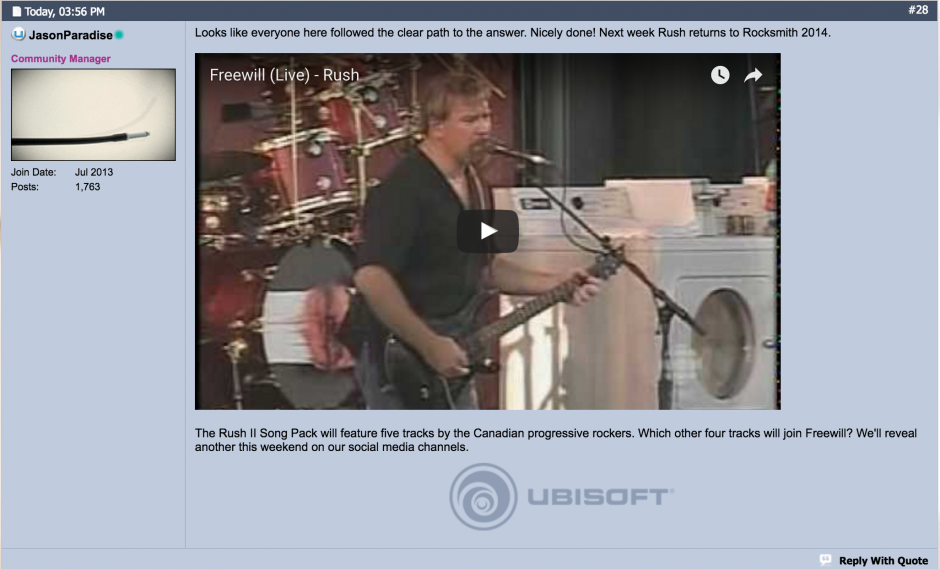 So here we have it. We’re getting another dose of one of the greatest bands to come out of Canada, or anywhere else: Rush!

As a Canadian guy who is, at least until Sunday, a teenager, there’s no underestimating just how excited I am for more Rush content!

Confirmed by the clue is the 1980 classic from Permanent Waves Freewill, which is making it’s rhythm game debut in this pack! As for what the rest of the pack could entail? While the last pack was most definitely awesome, it’s a shame that none of their proggy 70s content has been included in the game. With that in mind, here’s what I’m hoping to see:

The following is speculation.

While I strongly doubt that Ubisoft will put the whole 20 minute suite in as one song, I certainly wouldn’t thumb my nose at getting the most recognizable part of it. Even in this shortened segment, it’s still filled with incredible guitar and bass work that would surely make this a fan favourite track.

Closer to the Heart

Sure, it might not be the most technically complex song in the Rush catalogue (and don’t worry, I’ll get there soon) but it’s one of those pervasive songs on classic rock radio that just feels like it’s practically essential for another Rush pack. If you ask me, there’s no way that this song doesn’t get included.

What happens when you take YYZ, add like 6 minutes, and amp up the complexity by 10? It’d probably come out as something very similar to La Villa Strangiato, the true instrumental masterpiece in the Rush catalogue. Putting this one in the game would definitely give even the most difficult songs in the game a huge run for their money.

Finally, the song that started it all. Working Man may have been a big radio hit, but it’s still over 7 minutes of pretty complex guitar work. I’d say get your fingers ready for some fantastic solos that go on throughout virtually the whole thing!

So tell us, are you ready to give Ubisoft the big money for more Rush or do you think that Rush content is essentially the enemy within? Let us know in the comments!

Fly by night, goodbye my dear. Our next DLC's coming and we just can't pretend. Five songs arrive this week! pic.twitter.com/IKfY69wCea

Yeah!!! Waiting for so long for more Rush added, i know it’s only a dream, but i wish it would be a full ten song pack, like Hendrix…

After this we will have 12 songs 🙂

Of course, but we always will want more Rush ;)…

Rush will tie Jimi and Rise Against for most songs.

Yeah!!! Waiting for so long for more Rush added, i know it’s only a dream, but i wish it would be a full ten song pack, like Hendrix…

After this we will have 12 songs 🙂

Of course, but we always will want more Rush ;)…

Rush will tie Jimi and Rise Against for most songs.

Haven’t you been saying all the DLC is garbage lately? When was the last “overrated trash” we got?

Tony Mckay Well then you need to expand you music taste

How about you tell us what you like and we will tell you if we think it is trash.

The Riff Repeater why would you even respond to negative comments like that? Never will everyone be happy. I am sure I own at least 80% of the releases… and the other 20% that I don’t like, I don’t care. But I am not going to bitch and complain about it. Rush I love, but if there were never another rush release I really wouldn’t care. For me rush is not current. I prefer to embrace the new talent out there. And go back to the classics now and then.

Just trying to understand why OP is unhappy

Leave this page, you piece of trash. How could you not like Rush? I would like a good reason without the use of the words, “crap” “trash” or anything similar.

hey! don’t pick on Tony! Respect that he governs himself emotionally through music like everyone else. He doesn’t have to like the DLC! And it’s his right to dislike it if he wants! I buy ALL the DLC because I enjoy learning that way. If it were up to me, Rocksmith would ONLY have Smashing Pumpkins- the band’s entire catalogue- and I would play and sing their songs everyday for the rest of my life! But there are lots of people that dislike, heck even HATE SP, but hey, isn’t that the way it goes? Agree with TONY or not, he is still a man of ROCK and I would rather respect that than put a standard on him based on his opinion of DLC.

Oh, Tony. 🙂 Listen to whatever inspires you, recommend things you think might be worth other people’s time, but understand nobody cares about what you don’t like. Your taste is your taste, but it isn’t better than anybody else’s. No need for rage about things that aren’t your preference.

The video on your page of you playing Creed’s “With Arms Wide Open” makes it clear you are dedicated to guitar, but it doesn’t matter whether I like that song or not. I respect that that’s a song that inspires you, whereas it may not inspire other people. It does not need to.

Any other rantings and ravings about what music is good or bad simply don’t matter. Focus your energy on playing, not judging. Have a good one.

Just to get the order of events clear, it was Tony who called other people’s interests trash first, not the other way around. In fact, so far no one has come at him even half as strong as he came at others. I think he’ll be fine.

Just a dumb comment. You don’t have to like them but if you know anything about them they should earn your respect.

“In rocksmith there is no dlc that is good or bad, but thinking makes it so.” Ha ha ha, anyway- just want to give a shout to THERIFFREPEATER and all Rocksmith players. Just checking out the facebook page for the first time today, but I have been reading theriffrepeater site daily for about nine months. Love the videos too, great job! This program is going to save rock and roll, and we are all players!

Closer to the heart, working man, I hope those are there!

Someone said the songs were leaked and those 2 are on it.

The other 3 mentioned were Fly by Night,La Villa Strangiato and Freewill.

ill be in heaven if they include trees!

Hooray!! Another week of saving money

Hmm, well, I suppose Lee’s voice is a bit feminine, but I could let it slide sometimes.

John Doeson it has nothing to do with it being feminine

It grates on my ears and its physically irritating to me.

Still going bud new album , out tour everyone else RRHOF You wouldnt know a good band if they sat on your face

Dang it, more songs that I’ll feel compelled to buy that I’ll never be able to play! lolz

Too many good songs to choose just 5.

Time to dust of that bass. How come rush gets treated like their dlc is not a big deal and end of year bands like stp are the second coming

Rush is no stranger to music games and STP seemed to receive a lot of attention due to the passing of Scott.

2112 is obviously one of the songs, it’s kind of short though.

Too many great choices to make. 5 is not nearly enough.

I’d go with the rest of Moving Pictures. That album is worth an entire pack.

Working Man is not one of Rush’s best songs in my opinion. But, they’re still showing everybody how it’s done. The Fly By Night album is where Rush really starts to find their own territory, while still playing a more standard rock.

Fuck it, I’m throwing The Necromancer into the ring. That’s the first Rush song where Rush is pushing it to 11, Rush Style, or actually, 12 minutes and 31 seconds. They warmed up to epic songs on their preceding album with By-Tor And The Snow Dog. But The Necromancer is their first serious attempt at epic songs, in my opinion. It’s full of burning solos, at least 4, and tempo changes, yet it has a doable pace. It’s a good way to get beginners into more complex songs without killing them with tempo.

Digital Man is full off all sorts of variations on both bass and guitar. Guitarists should have fun playing the bass line on their guitars using emulated bass. It’s a very syncopated rhythm, not your standard rock thud thud thud thud stuff. Signals is as far as I can go with Rush. After that it’s a compressed keyboard wash.

Very few ways this pack could be disappointing !

For the love of God, please let The Trees be a part of this pack.