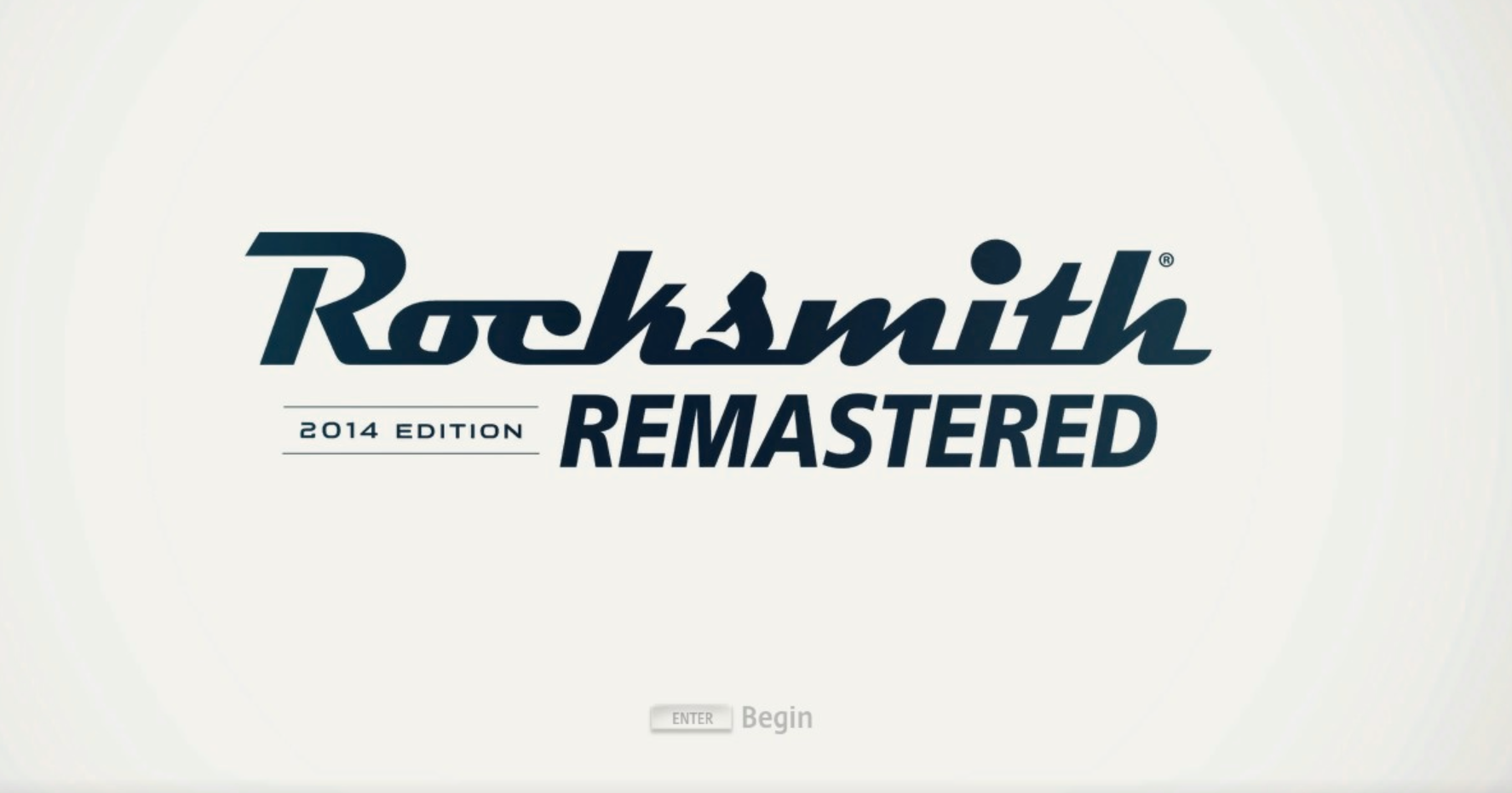 The countdown to October’s patch update has begun.

If you haven’t read up on the Rocksmith: Remastered info be sure to check this article out!

Those of you that caught last week’s live stream will have seen these screen shots already, but here is a chance to go over them in more detail.

We were treated to a screen shot showing some of the new filtering options in use: 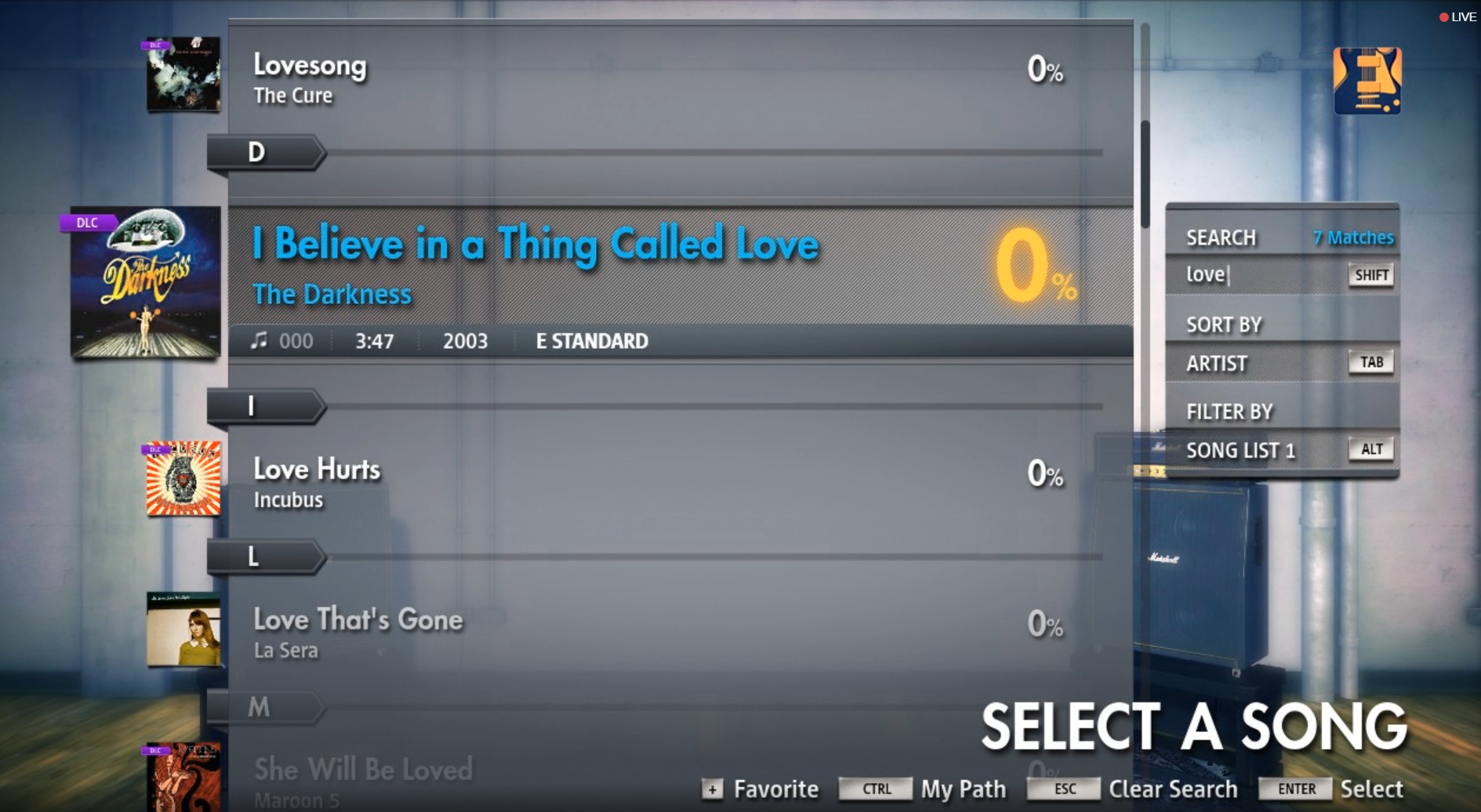 “Love” is used as the filter in this example, we were also told that anywhere the text appears; track or artist name for eg, will be displayed as a result with this filter. Console users were told that they can use their controller to enter text via the console interface and that external USB keyboards are supported.

If there is DLC you don’t own but matches the search you put in, it will also show up in your song list – at the bottom. The example given in the video was “The Offspring” the songs of theirs you own will be at the top of the list, the ones you don’t will be below them – so you can see if there are other tracks available by the band that you may have not known about, but that won’t be obtrusive if you don’t want to buy that track.

Note that the button to tag a song as a favourite appears to be changed, currently it is the “8” key on PC, here it is shown as the “+” key. We still have the path indicator in the top right and the “CTRL” key to change that, the new method of selecting paths quickly is still unknown at this stage.

We can also appear to filter the entire catalogue, by our own saved “Song List 1” by using the “ALT” key. (more on this later)

The “Sort by” list (accessed via the “TAB” key on PC) is next – and those of you that are used to using this feature should notice two new additions: 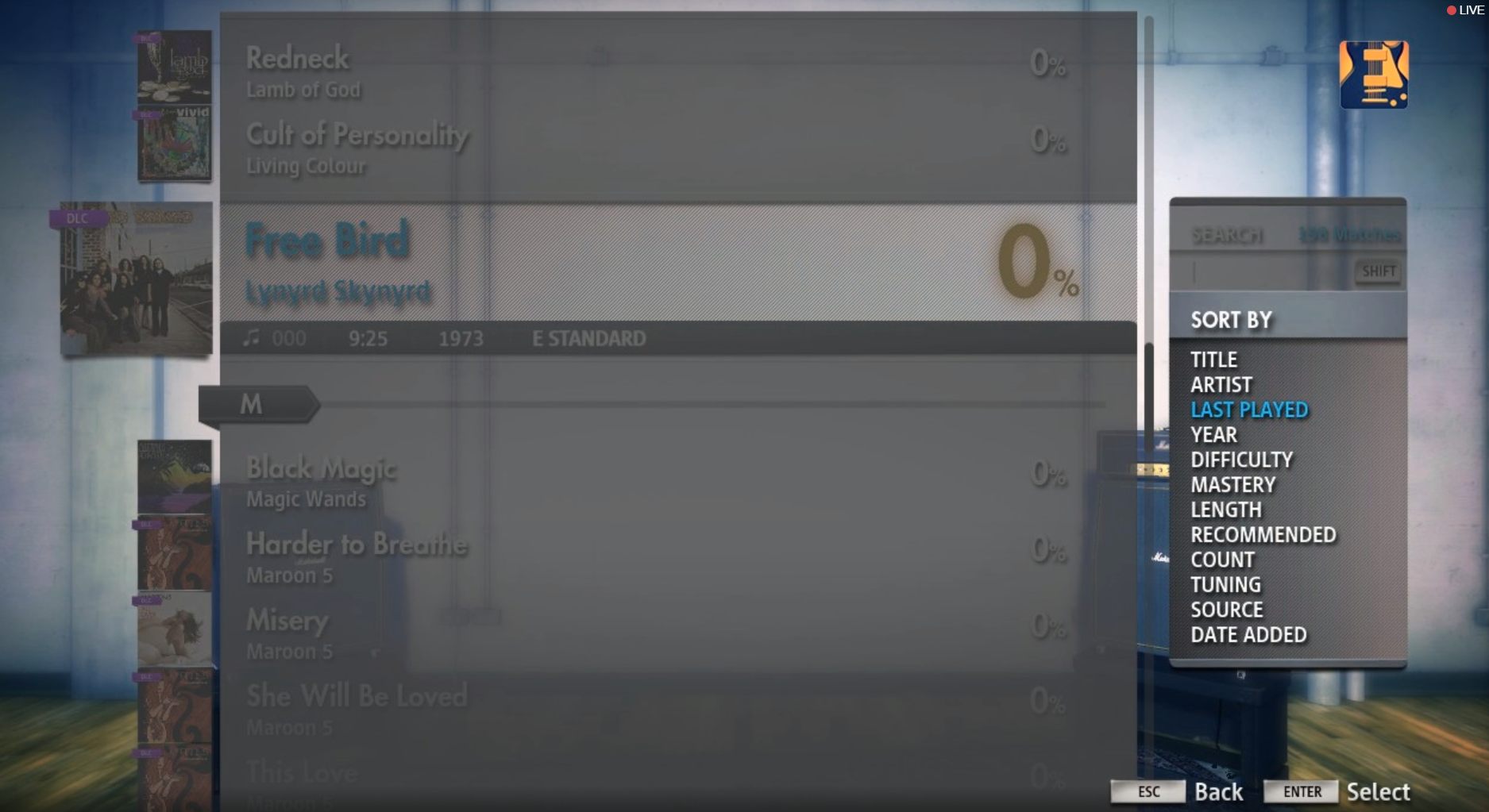 “Last Played” is obvious since Dan kindly highlighted it for us in the screen cap, but we also have the “Date Added” option as well.

We have been told that this is the date the track was added to the Rocksmith Catalogue, not the date you purchased it; there is already a user started poll on the UbiSoft Rocksmith Forums asking users to specify their preference for this, but it is probable that this feature is locked as advertised and not likely to change.

Where it does seem this option will be significantly more useful is within the Shop, since you can also sort in the Shop by date added now. 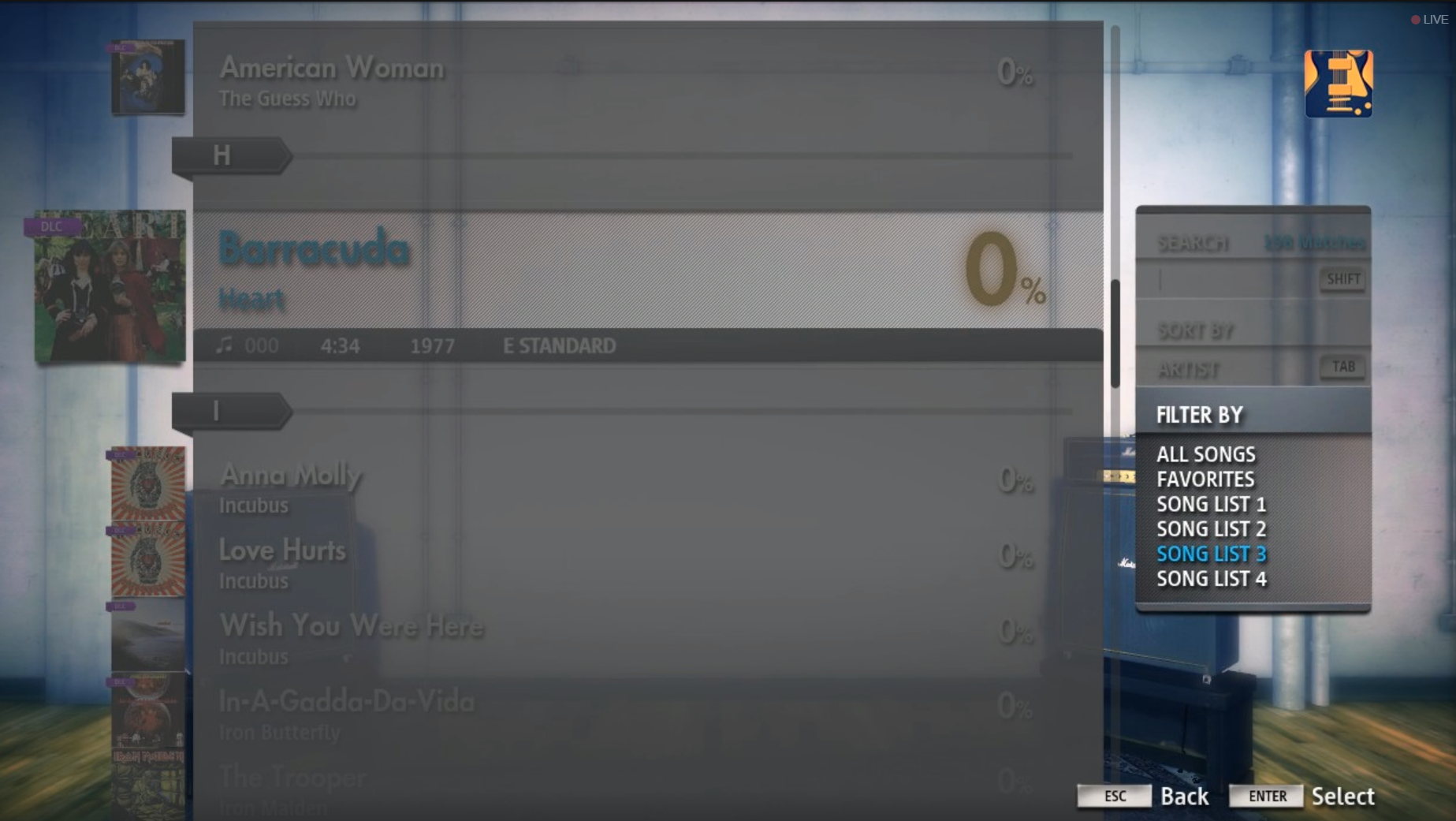 Dan was very quick to point out that the song lists are not re-nameable – nor are they a setlist or playlist with a saved order, they are a “bucket” that the songs are piled into. Think of it as now having 5 separate lists of “favourites” and you will get an idea about how they will function.

Of these, I personally think that entering text to filter tracks will be my most used new feature of those that we have seen.

“Sort by date added.” THANK YOU.

The update? Yes. The six songs? No.

I wish the update added more modes, lessons, playback after performing or a career mode.

The update addresses menu sorting. Not really worth a repackage.

It addresses a few things other than “menu sorting”

But at least we can find a song faster.

The Riff Repeater do you work for rocksmith or Ubisoft?

Nope, not an employee

The Riff Repeater I wish you were so you could get my requests heard.

They know you want all those things but unfortunately not really suitable for a patch. Hopefully a sequel for Rocksmith gets greenlit someday

The Riff Repeater I wish bandfuse would’ve lasted. The amp modeling was better, the latency was better and the career mode existed. Unfortunately the game doesn’t exist anymore. Oh well, here’s to hoping that they make another game. Because repackaging The same game and adding a few sorting options is only going to delay the process of them potentially making another game. Slackers

Starting from a old dinky dirty bar in Detroit while you hear gunshots in the back and if you make it big you play in Wembley? Lol.

Edwyn Ramirez why is that a bad thing?

Edwyn Ramirez did you play the original rocksmith?

I’m really excited about this update. It has a lot of the stuff I’ve been wanting. It will make multiplayer even more fun.

The best feature? The new songs that will be available 🙂

I’m still waiting to see how this nonstop play is be changed. As for song lists I’ll probably do it by which guitar I like to play the song on.

Will fine grained control over riff repeater be added? As in start and stop where I want rather than segments? This is a major bummer when learning new songs for me.

We’ve been told it will -- but haven’t seen any screen shots of this yet.

would probably make me play more rocksmith again if true! Riff repeater and the arcade are my only real gripes with rocksmith, hope they both get the treatment they deserve.

Hey, just to clarify — Riff Repeater no longer uses the longer groupings of sections that were so annoying, but it doesn’t let you freely choose ANY start and end point either. The new implementation is somewhere in-between. Definitely an improvement but maybe not as precise as everyone is dreaming. We’ll show it off soon.

Thanks for stopping by Dan.
Mind if I ask a quick question -- are we going to be seeing any improvements to the way levelling is selected during multiplayer?
Currently, it is possible to see a scenario where one of the players can’t select the entire track and level all of it to where they want. It only happens on some songs -- possibly due to repeated sections being levelled, but ones that are not repeated later -- not being levelled.

For eg, the primary player is on the bass path, secondary on lead -- but the track doesn’t have a bass section until a little ways in, it is possible then that player 2 can’t set the level of the first sections of their path to 100 / 0% etc.
Next Girl (Lol I know -- but it shows the issue) http://imgur.com/4qSi5fz
Bon Jovi -- Wanted Dead or Alive http://imgur.com/9NDS4bs
There are a few other instances where this is possible, those were just the quickest ones I could find and screen cap.

I’d like to see riff repeater have an absolute beginner mode where it pauses and you don’t move on to the next/note chord until you correctly hit the current one. I think Bandfuse has that feature.

I want the Riff Repeater to advance one segment forward after I master a segment.

Well it’s nice that I won’t have to hit tab incorrectly 30 times when trying to find a song by artist, that’s for sure.

You never needed to in the first place -- just hold tab for 3 seconds, and you’ll be provided with the list of sorting options! 🙂

Yeah I know, it’s just a bad habit. I end up doing that after missing it a few times, haha.

I’m with you on this -- I always press tab one more time than I want to… scroll round again, hit it an extra, rince, repeat… :/