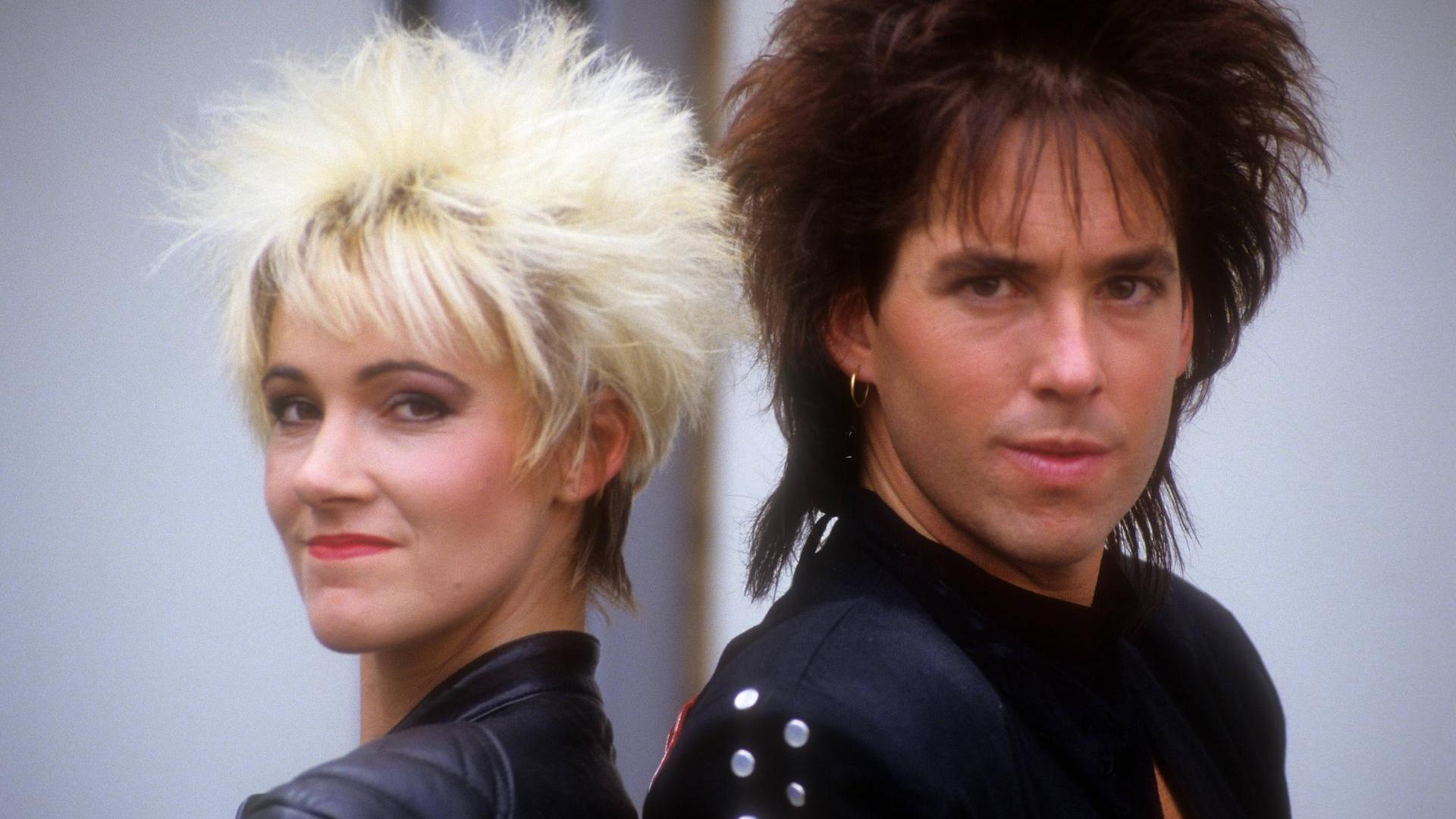 A bit of a tricky clue today as we enter the April DLC schedule for Rocksmith Remastered! With it comes a brand new artist to the library that I’ve hoped to see for sometime…

Let’s check out what RollingStone222, has for us this time! 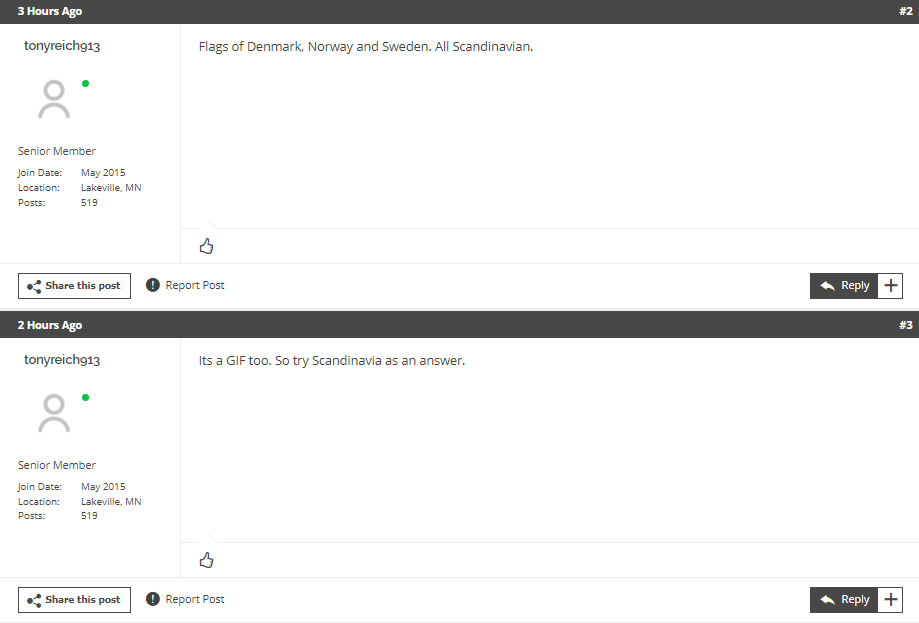 Yup, that was the unlock!

We kept trying to guess the code to unlock this GIF, but then we found out this was the last part of the clue… 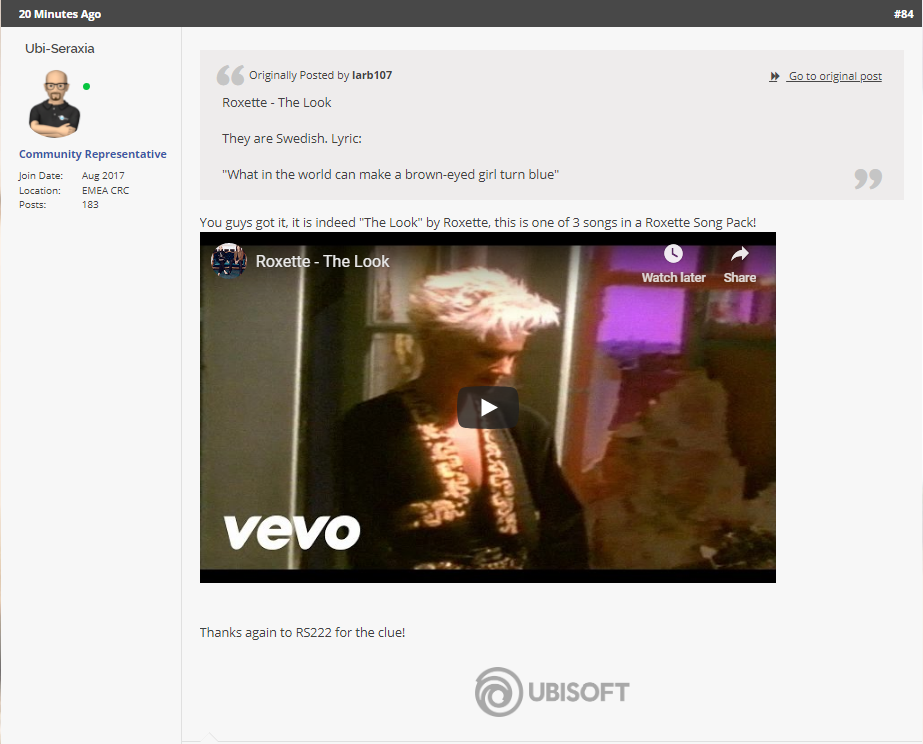 This is the second appearance of The Look in a music game, and the first song pack for @TheRealRoxette period.

What other songs might appear in this THREE pack from Roxette?

Hello, @Rocksmithgame. I love you

You know this ballad is probably highly requested

Or maybe the song with 376 million views…

Always was fond of this one

Are you excited for the debut of Sweden’s Pop-Rock duo Roxette? Or are you more looking forward to the rest of what April might bring? Let us know!

I’ve had Roxette on my mind since we got Heart a couple weeks ago. When I was younger I thought “Listen to Your Heart” was Heart’s theme song and it always reminded musically of “What About Love?”.

I love Swedish meatballs. Would be nice if the refused makes it one day? Seems like there is a lot of love for Sweden on rocksmith

Not my week either.

This is great! Love all their stuff and it’s perfect to go with those Heart songs!

I need to get an 80’s rock ballad setlist together now…haha!

Erm… my taste in music encompasses many bands and genres but Roxette? Hard pass. Hoping for something a bit more exciting next week as the last few releases havn’t been to my tastes at all.

“The Look” even has guitar? I can only remember synth. Kind of a fun song, though.

Well. I guess it looks like I go lalalalala.

I cannot believe I am actually admitting this, but I am kind of pumped for some Roxette. Many years ago, actually an eternity ago ( I am sure Roxette can attest herself), when this song first came out my high school sweetheart would play all her songs incessantly! There I was trying to fit in some Sabbath, Priest, and Maiden and instead I was constantly pulling up in front of the high school to Roxette! Sheesh! But, after all these years, its all pretty nostalgic.

The look is a tight track

Been waiting years for some Roxette in Rocksmith. My absolute favourite band ever. Just something about Per Gessle’s catchy melodies that has always worked for me. There’s plenty of guitar driven songs in their catalogue to choose from. My choices would be fairly obscure (ie: the tits & ass demo of 7twenty7), but of the more mainstream songs, there are still a heap to chose from such as Joyride, Sleeping in my Car, The Big L, Listen to Your Heart, and a few more you’ll probably know when you hear them.

It’s a shame that Marie Fredrikkson had to retire, as I’d really enjoyed Roxette’s most recent tours (all live, very guitar driven with Christoffer Lundquist on lead being one of most enjoyable guitarists to watch.) Having been fortunate to met them a few times, I can tell you that they are some of the nicest people you can ever meet.

I realized I saw them the last time they were in Toronto (2012 with Glass Tiger).

2012 was the last time they toured North America, which was the final leg of their 2011/12 Charm School/Travelling tour.

They last toured here in Australia in 2015.

Marie suffered a brain tumour in 2002 (which they gave her a 5% chance of survival), somehow she pulled through, although the treatment left her loss of sight and/or hearing on one side, no short term memory, and balance problems amongst other things.
The fact the she was able to start performing again in 2010 was a miracle, and the two tours that followed were basically her “rehab” (their words).
She fell over during a concert here in 2015, and had to perform sitting down after that as her injuries from her treatment were causing balance problems. The last time I saw her in person was in Sydney airport and she had to walk with the assistance of her husband.

Doctors told her after the South African concerts in early 2016 to stop immediately.

These days Per Gessle is doing solo stuff (both English and Swedish) plus working with his original band Gyllene Tider (they’d have some great tracks for Rocksmith!) for their farewell tour and album later this year.

Last year Per went on tour through parts of Europe with the Roxette band and played a lot of Roxette material with Helena Josefson sharing lead vocals (she sung backing vocals for Roxette in 2011, before having a child). I flew over for a few concerts, it was actually pretty good even without Marie. The music was basically the sound of the last two Roxette tours infused with a bit of country (a bit of slide guitar, and a violinist).

He hopes to bring that tour down to Australia and South America in the future.

Very nice. I hope they can include “Dangerous” and “Joyride”.

They both look like they want to speak with my manager

Loving the April fools joke. (had to say it before anyone else did)

This will end up being the first DLC of the year to get a mixed or negative reception, but oh well. Never heard of them, but I need to do some YouTube homework.

This needs to be in the pack!

Wow never, ever would’ve guessed that got enough requests to be included. Then again I never liked the song. Not my week. That’s ok gotta a whole month of April to try again. Wonder what others are going to think not like it’s a boy band pack (there probably isn’t a single guitar used in any of those is there?) but not something like Sabbath or RHCPs that we know has been heavily requested.

I would honestly guess no one has tried, cause of course why would you? But did you hunt for that or somehow know that existed? I’m definitely not clicking on it. Don’t want to hear it.

Ok I know you have a sense of humor especially when dealing with someone who has probably gone to far, we all know more songs are coming no need to go turd whatever his name is, but now I think you’re messing with me. That’s not a real thing is it?

Ubisoft must be spending food stamps NO VH AC/DC GNR Metallica ect. when i think of Rocksmith frist thing pops into my mind is Roxette are they even trying any more?

Lordy, lordy, (and this is coming from a constant griper) this year has been fantastic?! You do realize your expectations are a bit high, right? How long have you owned this game? Metallica?! They bitched and whined about Napster, how and why do you think they would ever agree to allow Rocksmith the rights to their songs? Also, not everyone wants Metal/Hard Rock every week (I however would love those bands you cited). Loosen up and enjoy some other genres and styles buddy-the world is an oyster so make it your oyster!

Must be why he refers to himself as the Duke….

Dude rocksmith does not have the budget to get any of the bands Ive seen them talk about it hell i don’t think there will ever be a new rocksmith for that matter.