@DanAmrich posted a clue yesterday evening and after 27 pages, we have our answer! 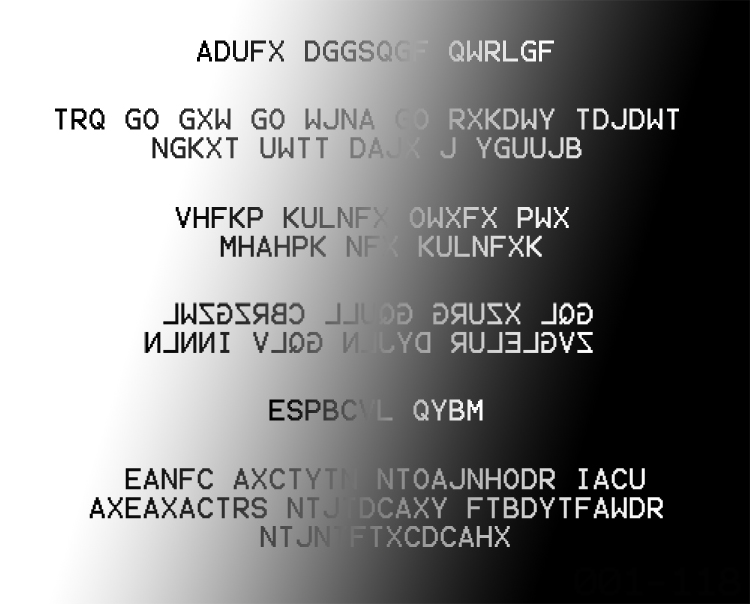 As well hidden on the picture was “001-118” which referred to the atomic numbers in the Periodic Table of Elements.

No stranger to music games, Linkin Park was an on disc song on Guitar Hero World Tour with What I’ve Done, later reappearing in Warriors of Rock with Bleed It Out and even received a DLC 6 Pack of songs from their 2010 album, A Thousand Suns. Rock Band features One Step Closer on Rock Band 2  and ten songs offered through two DLC packs! Heck, they even appeared on DJ Hero 2 DLC!

While not the most guitar/bass driven band, the people have spoken and with this release @UbisoftStudioSF continues their Top 40 Requested Artist streak! 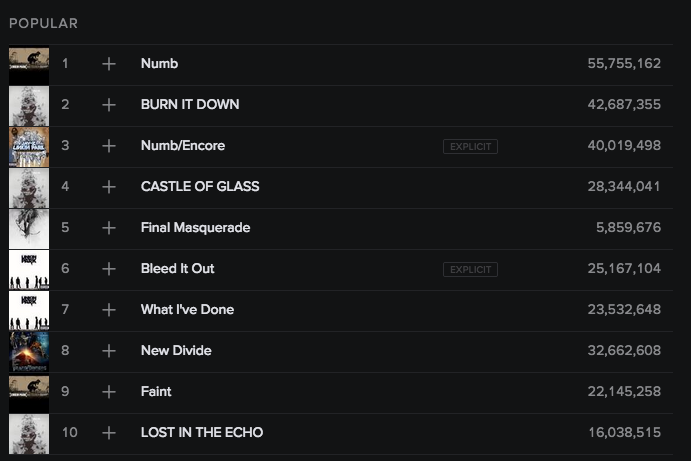 Here are the top 10 Linkin Park songs from @Spotify, what song do you think is most likely to appear next week? Not on the list? Add your own in the poll below!

Are you excited for Linkin Park? Or will this be the first “skip” of 2015. Let us know!

Your Spotify is broke -- In The End is top by a long way.

Can’t help where I live, sorry. Next time I’ll get someone in the US to screenshot

Hybrid theory was a good album but thats it. Just hope they add Given Up. I need more metal some more Killswitch please some Trivium Aand All That Remains and if at all possible Metalica

None of the above.

Linkin Park sucks. While that’s my opinion, I just don’t hear any noteworthy riffs, solos or useful techniques in their songs. Based on that criteria, its a bad choice for Rocksmith and I’ll be passing.

Although I do not think they suck, I think they are easy to listen to, I have to agree on the noteworthy riffs. Thinking back to what I listened of Linkin Park, I can’t remember one time being taken away by the instrumentation, just remember the vocals.

Hope that “Papercut” is on the pack. Probably the only song I’d buy from them. Not really the most guitar-driven band.

no thank u they suck and they should have gotten the Eagles, AC/DC, Pink Floyd, or Zeppelin to start off the new year not this crappy band….

Those bands will never come, I take it you’re a guy who doesn’t like bands after 1990.

If you are holding out for those three bands you might be waiting a long time, or forever.

That’s no reason why we should be pessimistic about them. We ended 2014 with 5 artists in a row off that top 40. I think one day we will see some of these bands in the game.

Five bands that are open to the idea of music games. Eagles and AC/DC sure. Led Zeppelin and Pink Floyd, that’s a bit of a tall order.

There will be some wine for the choices of the songs, definitely.
Hope for “a lot” from Hybrid Theory
Papercut, One Step Closer & Points of Authority will be great.

News flash! Dougybongy is a music snob and elitist! As if there aren’t enough of those on this forum already 😛 lol

thinking linkin park is a terrible commercial band for supermarkets soundtracks make me snob and ellitist?
more laughs…! then i’m glad to be…!

How are they a “commercial” band? They were only briefly popular in the mid-2000’s.

I don’t know. I think “popular” might be overstating it a tad.

I don’t like Linkin Park but saying they aren’t popular is an insane statement, like come on…

I suppose in the end it doesn’t really matter though

I just check their sales over the years, it’s quite astonishing to see that Hybrid Theory has been sold 27M and Livings Things only 2,5M

They’re still popular, but not as they used to be.

You know I kid. As always, congrats to those who like ’em. It just falls into the inevitable 20% or so of DLC I won’t be getting.

Hard to like it all. Thanks again to Rocksmith for putting new content out there every week.

Haha, I see what you did there.

that’s one of the only bands i remember having adds on TV for their album release…
For me “commercial” mean they are made to make money, but it not necessary means they manage to do it, even with a big promotion plan.

Yes. Calling them a “band,” and let alone a boy band makes you snobby.

Hahaha…!
I have always considered Linkin Park as an ashaming boys band..
Worst “band” ever. PASS, no even need to watch preview vids.

pass
just never got into them

I hope there is a decent amount of stuff from Hybrid Theory. I think I’m aware that they continued as a band after that album, but over here in the UK their career was existent.

Whenever I see videos of this band it.looks like there are 10 people.on stage and.one guy just screaming like he.lost.his car keys. I’ll buy it

I really hope they mostly pick songs based on guitar parts and not just on popularity. I’d like to see:

But I’m not getting my hopes up.

And I hope they pick easy songs for the noobs

i’m pretty sure linkin park has easy songs in general i really don’t hear anything too complex . They have a big processed sound but its not because of guitars or bass parts

They do have some fun guitar parts, though I am crossing all my fingers and toes that What I’ve Done IS NOT part of this pack. Fun to listen to but boring to play.

And calm down haters. They’re a Top 40 band, and they were up higher than BFMV for sure.

YAY FINALLY! I love LP, and some of their tracks have great guitar in them. Check out One Step Closer and Numb

Pass, The guitar is very easy for me

Even though I’m a fan of Linkin Park, especially their more recent albums, I’ll admit that I’ve never noticed a huge focus on guitar by them. I would say that if anything, a lot of the best tracks to pick now from a guitarist’s standpoint would be off of The Hunting Party.

Omg!! Finally my favourite band on rocksmith. Happy new year to me!!!

Foo Fighters and RATM for EU PS3 would be good…

That will most likely come in February

Thanks… Happy as long as they come 🙂

Well, it is just a matter of time when all of my most hated bands are represented. Almost done with brodude rock hopefully!

On a scale from Shadow to Coldsteel, how edgy are you guys feeling?

I have no idea what either of those things mean.

I’m feeling so edgy I’m going to request Gorilla Biscuits in this thread that has nothing to do with making requests.
sXe
Pennywhistle for liiiiiife!

I requested some Judge and Slapshot the other day on the official tool thingy… one day!