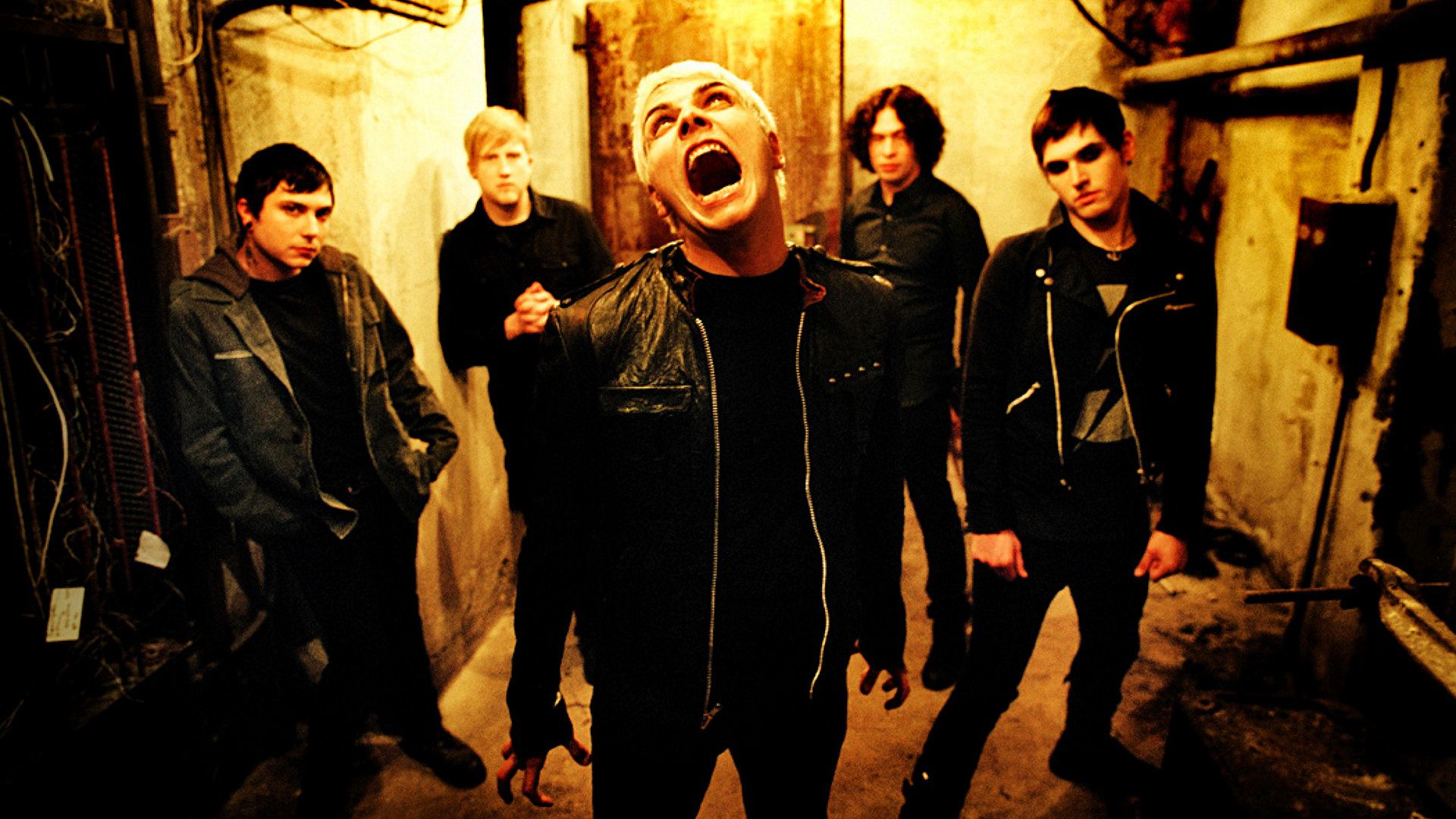 Another returning artist this week as @DanAmrich’s clue has been revealed and solved!

Props to @jromeo288 for getting banned for posting too much and then getting reactivated in time to solve it!

Yup, it’s My Chemical Romance II featuring a very in demand single that appeared in Guitar Hero II back in 2007!

You may remember the first My Chemical Romance DLC from May 2012, that’s quite awhile ago as you can see by the videos being shown. 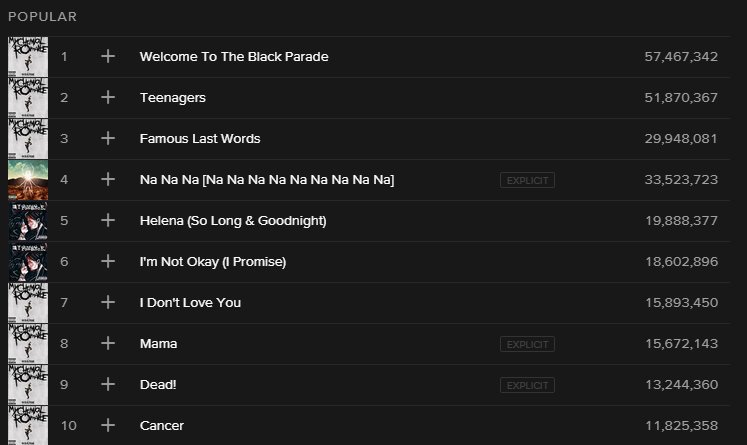 Here are the Top 10 most listened to @MCROfficial songs on @Spotify US! What song do you most expect to be in next week’s five pack?

Are you excited to see @MCROfficial return to the Rocksmith library or would you have rather the idea of a second pack stayed Dead! Let us know.

When you take that bus, you get there

What do you think the chances are on getting more a perfect circle, or tool, or deftones 2, Metallica, zztopp. You know the good stuff.

They did a single of perfect circle so pretty unlikely judging by how single songs are released and they are pushing for Tool but that might be in 10,000 days Slight chance of deftones but not enough hit songs to release a pack more likely a single release. If Metallica is ever released it might mean the end times are here and ZZtop probably too much money and not the right demographics.

This is why I haven’t played this game in months 🙁

Because one week of DLC you don’t like? Or has nothing appealed to you in months?

The choices of dlc the last however months.

It’s just that the whole 2014 had much weaker DLCs than the original game.
Last time there was a Steam sale, I had $100 to burn and I decided to buy Rocksmith and some DLCs for a buddy of mine. And in the process of that I realized that 90% of DLCs that I thought would be enjoyable to play were the original Rocksmith DLCs.
I think I only grabbed Surf pack and a couple single songs from the 2014 lineup (of course there is the majestic Hendrix pack, but it can be frustrating to play due to difficulty and downtuning, so I decided to do without it).
So yeah, 2014 got a lot of pop but not that many classics. Although I’d presume that pop sells better and is easier to license than the classic rock.

Lets continue with a few of the singles he hinted at,

Dude, there is so much Classic Rock out there that it’s hard to complain about it’s absence. In fact there are very few genre’s that Rocksmith DLC has not touched. (< yeah that conversation rears it's ugly head again.)

Anyway, unless you are classifying Classic Rock as only being those super huge band, the genre has been well represented. If you're holding out for groups like ACDC, Metallica, or Van Halen, better stay satisfied with RockBand or Guitar Hero. Don't think it will happen in Rocksmith.

I'm still curious about GnR though. Hope Ubisoft gets at them quick before the eventual explosion returns

No that would be 80’s hair band … I’m the teacher here son sit back,shut up and I’ll teach you some more about the things you have no idea about!

You are the best comedian I’ve seen on any rocksmith site.

Do you have a Netflix special? I’d love to watch

A boy band wearing leather and makeup! Drugs and Romance…nice…but seriously though…I think they’re ok. I have heard that dead song before and it is a song so…

Jesus christ bob chill. Its just one week. Deal with it fam.

Famous for thé tone and epic song , helena for the popiest one but brings memory ( mtv) , dead, cause it was the answer, this is how i dissapear would ne too much of a dream and the last one from that helena album at the end of the album theres somme good song That pack save the month bécause of those last 2 weeks , got roseanna and working for the weekend

MCR isn’t an emo band. Just because they wear eyeliner and dress a certain way does not mean their music is emo. Their own singer has said that emo music is a pile of shit.

What i mean is that now we are seeing more II packs and that means rocksmith is starting to run out of ideas for bands and we are getting more of them now.

And that Radiohead II is coming too

But I agree with you on that last sentence, there have been quite a few repeat packs recently. I think they should do way more different bands. But we should understand that RS can’t always get every band.

Agreed, I don’t mind multiple packs from artists personally and “running out of ideas for bands” is just a ridiculous statement all around.

Let’s be honest. If we’re all making requests, I don’t see how Ubisoft could run out of ideas for bands.

Blue Oyster Cult II please. (Not that BOC I was released as a pack.)

I think they released them each as singles or in Classic Rock X packs, and then later made a pack out of them. So technically not “released” as a pack”. 🙂

Operative words being “I think”.

Running out of ideas for bands? Foolish thing to say

Yet another glam rock band …zzzzzzz

Glam rock? Do you even know what Glam Rock is? An example of a Glam Rock song in RS is “Round and Round” by Ratt.

An example of glam would be Ziggy.

glam metal , glam rock for ratt and bowie , my chemical is depend on the album

oH my god i’m so excited for this 5 pack. my guess is
-Dead
-Helena
-I’m Not Ok
-Teenagers
-Famous Last
but really hoping for I dont love you

If it has to be emo the used, brand new or more three days grace

Naah…System of a down II pack pweeease! 🙄
P.S. just clicked to edit. Nice touch!! You guys are killing it!!

I was hoping for some more songs by this band!

The first pack was fun to play and I never really enjoyed listening to them. If seconds packs are the trend then we need Pj, Aic and pumpkins

Why not another system of a down pack. Why is there no red hot chili peppers pack yet

Why them. So many better choices…

^ this, so many better choices indeed.

Man, I’m seeing some mad hate coming up. But eh, they’re OK emo. I’ve learned to enjoy Brand New a lot more than them. So if I were to revieve a repeat pack from an emo band would be BN. Since I don’t know much of MCR I’ll post what I know:

they got a mad awesome drummer and some really fun guitar (as heard in dead!) personally, i’m the opposite of you.. dont like much emo bands but MCR is great and Brand New is just average.

Excited for this pack. Will purchase.

Please no more of these crap artists. This is not ok.

Dead for sure. Hopefully the rest are tracks from 3 Cheers (thank you for the venom would be dope) or I brought you my bullets (headfirst for halos or skylines and turnstiles) would make this pack for me.

Awesome, my dad got me into MCR a long time ago, when Three Cheers for Sweet Revenge just came out. I don’t think it’s very likely, but I hope The Ghost of You is in this pack. That was always my favorite song with MCR.

Please don’t let this start another rant that this is dad rock. 😀

Haha, I never thought of this as dad rock. I just figured my dad have a very weird music taste for his age (or really good, I suppose).

Famous Last Words is a really fun song on guitar, hope it makes the cut