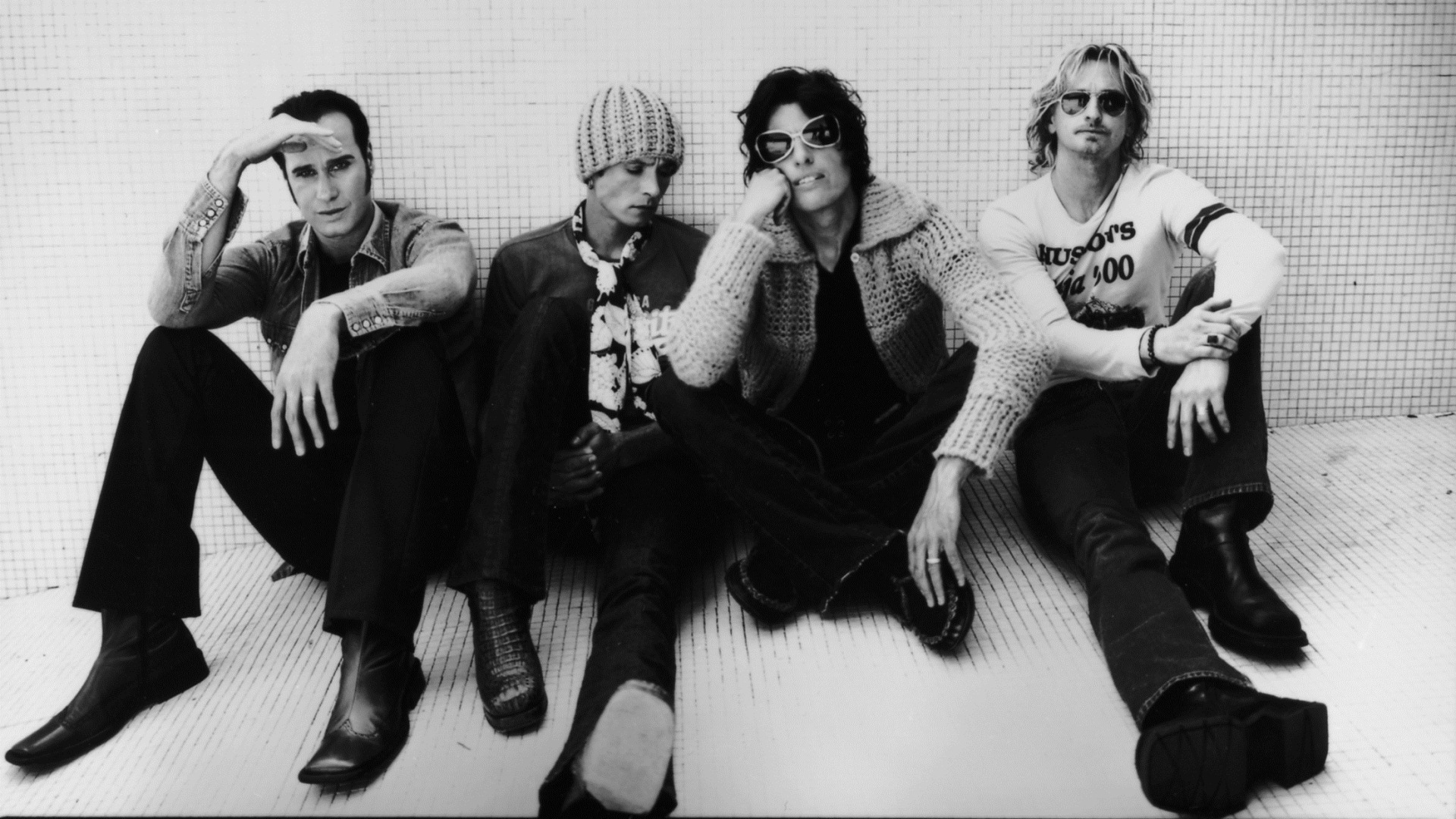 Yes, next week’s DLC is a SIX pack from the legendary American rock outfit, @STPBand.

As you know, the Rocksmith team prepares its DLC several weeks in advance, and we like to keep each new release a surprise for the community. However, the sad and sudden news of Scott Weiland’s passing has both an emotional impact on us as fans and a practical effect on our plans.

As it turns out, our December 22 DLC release will be a 6-song Stone Temple Pilots pack, and that release has been scheduled for several months. The band’s music has been heavily requested by Rocksmith players for some time and we’ve been looking forward to fulfilling that request this month. Nobody could have predicted this tragedy, and we don’t want our intentions to be misconstrued. Under the circumstances, we felt it was better to let players know the DLC plans that were already in place.

We hope Stone Temple Pilots fans will enjoy learning to play the band’s music despite the recent events.

We seem to have a slight hint to what is coming next week thanks to the fact I am Canadian and have to ask US friends to screengrab @Spotify US to get an accurate idea of what is popular!

@toymachinesh Hint: Our six are in their ten.

So given that we already have Vasoline thanks to Rocksmith (Import) and there’s an acoustic song listed, there’s only two wrong answers here…

What are you hoping to see?

What songs r in the pack?

I’m back here to post seeing I got banned from the Ubi forums… again.

Great pack -- this will be amazing!

No offense to you, but I can’t think of Bono without thinking of
More Crap

nothing wrong with STP but from a guitar players perspective you’d get a whole lot more from a U2 pack. Tons of cool effects and David Evans’ ( I cant bring myself to call him “the Edge”) big melodic solos.

U2, Van Halen, Robert Palmer…they had a good 2015… hopefully RS will be able to get them too…

STP is good. I used to listen to Core and Purple a lot. Maybe I listened to them a little too much.

I would pay twice the going rate for all of these songs.

Don’t forget about “look around”! 🙂

of the 8 possible songs, I’m hoping for:

Super bummed that Trippin’ On A Hole won’t be included. Oh well, maybe they’re saving that gem for the next RS on disc?

My pack would be 1. Big empty 2. Interstate love song 3. Dead and Bloated 4. Sex type thing 5. Wicked garden 6. Creep. I know there is no way that plush won’t be in there (prolly at the sacrifice of Big Empty) and Plush is still a good song , just not in my top STP 6. Nonetheless this pack is a definite buy for me. Hope Rocksmith continues with the great DLC like this year’s final 3 packs well into the new year!

Should be a popular pack among their fans, of which there are many. Im gonna wait for the charts. 90s grunge rock is usually pretty weak in the lead department, and I already have too many strum alongs I never play. Too bad trippin on a hole in a paper heart didnt make the cut, thats one of the few STP tracks where Dean DeLeo gets to show his chops:

I had a feeling this was going to come sooner than later. It’ll be hard to go wrong with the song selection here, as most of their stuff has been so influential on so many people over the years.

In no particular order, these are the songs I’d love to learn the most:

I’m getting the impression that not many people read this post fully, as it says that the 6 songs are among the top 10 up there. Vaseline is already in the game and Plush (acoustic) probably won’t happen along with the electric (more likely) version, so that leaves 8 songs from which we can choose 6. Putting those probability skills to use, that means there are 8 choose 6 = 28 possible packs. However, I feel like one of them is the likely standout, but that’s my opinion.

However, we do in fact know the only 8 potential songs, so there’s that.

That’s funny! I read the article but somehow missed the clue with the 6 songs being in Spotify’s top 10. I might want to work on my reading comprehension… Hopefully STP will be a top seller and they will get a 2nd pack next year, as I would really like to have Crackerman, Trippin on a Hole, and Lady Picture Show. Still, I am very excited to have a STP 6 pack to close out the year.

STP is a hit and miss band IMO, but some of their songs are pretty great. I’m sure there will be at least a few worth buying.

I wonder if this pack will have any STP songs released after they got Chester Bennington to be their lead singer. I kinda doubt it.

>I wonder if this pack will have any STP songs released after they got Chester Bennington to be their lead singer.

It’s just to hard to guess 6 songs when a band has so many hits… I seen the band twice and love almost every song… 3 out of the last 4 packs have been great… Thanks Ubisoft for closing out with STP and not some lame ass Mumford and son!

While I’m sure opinions may vary, I feel that for me, this year didn’t end nearly as strong as 2014 where, between Aug and Dec we received No Doubt, B.B. King, Albert King, the 1st Bachsmith, Bon Jovi, The Police, Tom Petty, and large packs from Rage Against the Machine, and Jimi Hendrix.

The Crue and STP were two groups I asked for, so it’s nice to see 2015 close out with them.

So where are we now on the Top 40 most requested artists who have yet to appear in Rocksmith list? Should be somewhere between 15 and 20 now right?

Its funny how this band was hated and loved in the nineties because people called them a Pearl Jam ripoff. Nice to see they will be remembered well ,they have so many cool songs I would buy a 12 pack

It’s hard to narrow it down to 6 songs…

And I couldn’t be happier about it! 🙂

Is it speculation (the forming of a theory or conjecture without firm evidence)? Dan confirmed it’s STP….

Yes, because we don’t know what songs are coming. How long have you been on this site that you need to make this comment?

This is a great recovery from last week’s (In My Opinion) horrible pack.

1. Plush (since this is their most popular song this is a must)
2. Interstate Love Song
3. Big Bang Baby
4. Wicked Garden
5. Sex Type Thing
6. Tripping On A Hole On A Paper Heart

Layne staley is also gone, and as a alice in chains fan i would be remiss if i didnt ask for another pack. Grind, rain when i die, down in a hole, nutshell. Also tool, a perfect circle, zz topp, metallica, and coheed and cambria. Some of us stay clean, and some of us ride the train out RIP mr weiland.

dont care what songs are included this is an instabuy. Love STP! RIP Weiland!

no trippin’ on a hole? They get one more song than the usual 5 pack and still manage to drop the ball. way to go ubisoft.

Popular does not mean good, and vice versa.

They have way too many good songs and the request data probably favoured those songs over Trippin’ which seems to be a song mostly popular because of it’s inclusion in Guitar Hero II from what I’ve seen.

SO looking forward to this pack!
My choices:
1.Dead And Bloated (my personal favorite)
2.Creep
3.Plush
4.Interstate Love Song
5.Big Empty
6.Wicked Garden or Sex Type Thing (would take either but hoping for Wicked Garden)
In conclusion, a great way to end the year in my opinion. Thanks Rocksmith Team. 🙂

That is the quintessential STP 6 Pack. Make it happen.

Classy move by RS to announce this earlier this month after Weiland’s passing. So sad what happened to Scott, and since this DLC was already planned for release it is just a coincidence, but still a good tribute to a good band.

I would like Plush, Wicked Garden, Big Empty, Trippin on a Hole in a Paper Heart, Interstate Love Song, and Unglued. Probably going to get Creep, Big Bang Baby, and Dead and Bloated instead of Wicken Garden, Trippin, and Unglued. Not sure how I feel about that.

I’m guessing big bang baby and wicked garden are the 2 that didn’t make the cut.

I want Interstate love song, plush, big empty, trippin on a hole, wicked garden and unglued. Looks like no trippin and unglued which means we will probably get dead and bloated/sex type thing which are my two most disliked songs of theirs mainly cause they r overplayed. How can trippin on a hole in a paper heart not be in the first STP pack????

But it’s a good start. 😉 Looking forward to it.

(And, yes, those and more requested via the app)