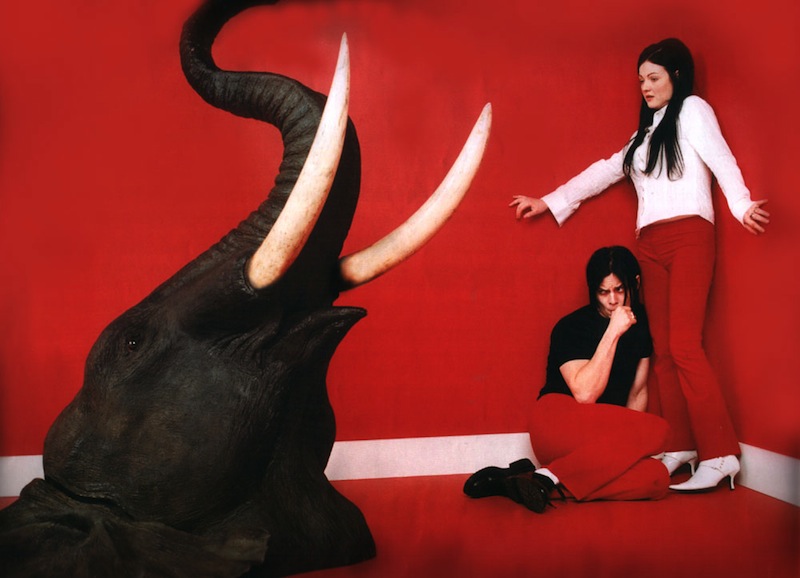 It’s Friday, and the DLC clue has already been solved, in under ten minutes!

The White Stripes are an American rock duo formed in 1997. You may remember some of their songs like Seven Nation Army, and if you haven’t heard that song then… I guess now you have!

Because “Not all tracks coming on Tuesday have basslines, but some do“

Not likely, more of a personal request.

Bassists get ready to rabble as there could be a large chance you get left out for a few of next week’s tracks… Is The White Stripes a mega hit band that you will be insta-buying? Let us know in the comments below.

Hotel Yorba would be cool !! 😛

(not I fell in love.., it’s not insteresting to play)

Months of bad DLC. Nothing interesting since the classical pack, and that was more appealing as a gimmick than it was stuff I was dying to buy.

Looks like that isn’t changing this week. I haven’t touched this game since early summer. Pretty pathetic.

WHAAAAAT?????? What about the session mode? It’s insanely good!!! I learnt how to navigate the neck in any key by just jamming scales shapes in that mode way better than I ever knew them before. You are missing out!

It’s one thing to not be interested in the music selection, but to call it pathetic just because you’re not a fan? That in itself is pathetic.

Has the pack size been confirmed yet?

Jack White is from Detroit

look at this losers user name, really, isis?
and look at the hate:

I’d ban this idiot. Cuz you know, with isis in that user name and the last sentence of this stupid post, NSA and FBI have alread tagged that account.

Somebody give this person a hug, pronto!

It’ll just be 7 Nation Army for me. White Stripes are so overrated it’s stupid. No bass, terrible drumming, but it’s so raw and unpolished that it’s apparently “cool” to like. These guys definitely opened the door for countless other no-talent-indie-hacks.

I was really hoping for some Chili Peppers or RATM… oh well.

I think all of us who plays bass are hoping for the Chili’s and have been since day one… haven’t had a challenge on bass since the Boston Pack. Duran Duran, as much as I love the pack, was easy for me.

Hmmm? No bass? So that makes him overrated? I would think that makes them underrated as Jack often plays a bass line with his guitar. Lets see, Jack White is continually in the top 20 of all time guitarists on most reputable sites. Overrated? Morello is totally overrated, dude. Uses way too many effects, simple progressions and all he does (redundantly) is that gimmicky slide and kill switch thingy, wow thats impressive. You must be a bassist, prob hate The Doors too cuz they have no bassist, lol. Bassists ha!

Morello plays some challenging rhythms starting phrases on offbeat 16ths etc with percussive rakes and muted notes thrown in — I find it difficult and he is very under-appreciated.

I also like Jack White and have enjoyed playing all the RS songs Icky Thump and Sixteen Saltines. I wil get this pack.

Johnny Ramone also ends up on these “best guitarist” lists, so that kind of tells you how meaningful they are. Not a WS hater or fan specifically, but OP is correct. They’ve found a niche, but they’re not really all that good.

I think the fake White Stripes of Weird Al’s CNR would be fun as a bonus song. It’s kind of too easy to bother though.

So, I ll buy a DLC but I’ll not able to play some songs because I only have basses and no guitars.
I guess, one day, they’ll release a DLC with no guitarlines.

White Stripes is literally a 2 instrument band. What did you expect?

I don’t see how they could screw this up!….. but I also said that with the aerosmith pack 😳

Why must you always spam metal requests here?

I think if Ubi could get ACDC they would have already. 😉

Ball and biscuit hands down should be on there.

I expect Blue Orchid. I don’t know if I will get this pack for sure yet as I don’t really play guitar, but we will see.

I think I’ll pass on this one, the only White Stripes song i like is Icky Thump and RS1 did a poor job on that one by not charting those solos and I doubt they would remake it in this dlc. On a side note I hope we get some more challenging dlc soon, I’m starting to get a little too comfortable. I need my fingers to bleed!

I’m sure the solos are played on a organ.

Some of the solo parts were, but others where on guitar with an octave pedal. They should have arranged the organ parts on guitar anyway, It would have been possible by using the octave pedal.

Actually those “organ” solos were played on a clavioline, but I agree that the charting in Icky Thump was disappointing.

I love the Clav family of instruments the clavinet on Superstition by Stevie Wonder got me hooked. it’s the funkiest bassy-ist keyboard tone.

The Seven Nation Army chant has failed in Baltimore tonight.

yeah there’ll be no bass on these i guess.

FUCK YOU WE WANT ROYAL BLOOD

You have to use facebook for requests so I will just spam here and hope someone worth something (I.E. not from Ubisoft) who can do something about it will read it.

Played WatchDogs recently on PC and the bloody Ubisoft bloatware they make you use… Ubisoft you suck so hard you make the Xbox interface seem reasonable.

Bandfuse’s surrender was the biggest defeat in the history of rocking out video games. Our only hope is they regroup and come back with a vengeance. Hurrah!

Bandfuse was dead to me as long as it didn’t release on PC.

Now it’s dead to everyone else.

For us with TVs, HURRAH!

Whether Bandfuse is dead or not, this kind of DLC would still be perfect for a real guitar game that uses stems and ducking, so you don’t have to double up your guitar playing all the time with the original guitar.

Oh my, there’s still a lot that could make it:

Agree with your chosen five -- it would almost be an insta-purchase for me!

Here take my money 2 weeks in a row. I’ll take a 5 pack of White stripes. Ball and Biscuit please.

We need both Ball and Biscuit and Dead Leaves and the Dirty Ground. This would make me a happy DXK.

Does Rocksmith have support for a slide/bottleneck? Will this DLC come with tutorial videos for using slides?

I seem to remember them saying the note tracking didn’t support slides, but that may have been just RS1 (hence the freebird chart being a bit meh)

Speaking of lackluster RS1 charts, the chart for ICKY Thump was a heap of garbage. They did not include the solos at all and that made the song boring and repetitive.

They didn’t upgrade Free Bird for RS 2014 either; it has the same boring acoustic intro.

I was just thinking about that the other day while listening to the Allman Brothers. I hope they work it in. Couldn’t see why the software couldn’t pick it up.

Meh! this is very easy for me

Wow. You must be so awesome, give yourself a pad on the bag for me.

Pad on the bag? Do you have a cold?

I may eventually get it
but why should we pay full price for DLC thats lacking Bass or Rhythm path …?

What a classic DLC reply/comment. Throw back friday indeed.

This should be awesome. Would be extra awesome to get White Stripes x4 with Raconteurs Steady as She Goes my favorite Jack White tune.

Hoping they have the White Stripes cover of Jolene.

I’m mixed, I may get it, I may not. I like some good old rock and roll, and this is mostly that, but the songs that don’t have basslines, I really think they NEED basslines. I’m just waiting for the bass to kick in to really make the track go, but it never happens… this better mean that next week is Primus or Chili’s or Larry Graham or Funkadelic or just something really good for the bassists! Yeah I can wish. I’ve already put in my requests. I shouldn’t post when it’s this late. Sorry.

I would love that so much. Graham Central Station, Primus, RHCP, PRINCE! BRING ON THE BASS!

I know, only one slap bass song in the whole game, and that was from Rocksmith 1, so it’s certainly needed. MORE SLAP!!!

We want the funk doesn’t have any slap in it, and Rio doesn’t either, just a couple of pops -- it really does not count as a slap bass track at all. Higher Ground is the only slap bass track the game has ever seen. And I nailed that on the first game.

I will admit I missed this one as I don’t much like this band, but to be fair a couple of slap riffs and most of the song in fingerstyle still doesn’t, to me, count as a slap bass track. Sorry to be a pedant, but i am one so there you go. 😉

I will be buying this no matter what’s in the pack. I want that sweet sweet Jack White…

Orioles are playing in the ALCS this week and they chant Seven Nation Army during a rally. What if this DLC sends Baltimore to the World Series.

O’s just rallied to the power of Seven Nation Army. It works!