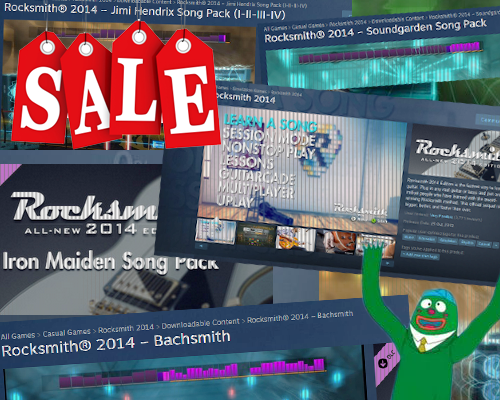 Hello Rocksmith fans! (Specifically ones that play on Steam)

It’s that time again to grab those songs that you were saving for a raining day as the Steam Summer Sale begins!

Remember that you can import Rocksmith songs into Rocksmith 2014 (that’s 52 songs for under $30). In addition to this there is still a steam limitation that prevents a large portion of DLC from being even purchased on RS2014 if you don’t own the original. This is a good time to solve that problem for yourself as Valve doesn’t seem to be fixing it further.

That means everything before March (so The Cars, Jeff Buckley, Shamrock Song Pack, and Anthrax is not discounted) is on sale right now!

Just hope they will have Canadian/Quebec(kers) groops as Galaxy with album : “Tigre et diesel” (Tiger and diesel… as free translate.)

must be a ton of traffic on the dlc store right now. combined with my poet hate of not being able to select multiple dlc in one “add to cart” and having to go through the ringmarole each ech time means that getting blnks on the dlc store 50% of the time. Man i hate adding each dlc one by one to my cart…

US$8.20 here in Oz. Not sure why they add the GST, then convert from USD… We end up paying the conversion fee on the tax and none of it would go to the government here.

Oh well, it could be worse I guess. I could own a console. :stuck_out_tongue:

Just bought all the RS1 DLC I couldn’t bring with me from PS3. Thank god for steam sales. Best change I ever made, moving to PC.

Just bought a few older packs. I have a fairly large Steam wishlist, so I have to pace myself. But for now I bought the AFI pack, the Golden Bomber Pack, and Barracuda by Heart.

Gaben Claus is coming to town

Yes, it is a Steam sale.

Do you need some cheese to go with all your whine?? Geez man, STFU.

Nope, he’s right. Consoles are long overdue for a sale. “STFU” yourself, Curly.

Why you still playing it on console? The PC version has better detection and runs as 60FPS. RS 14 PC isn’t too demanding in terms of spec, just ensure you have an ssd drive. I swapped frm the 360 version last year and haven’t touched my it since. Due to the sale it’s 40% off at the moment.

There are a multitude of reasons not to buy consoles. The Steam sale is only one of them.

He’s always on here bitching about one thing or another. I would also love a console sale, but I just wish he’d stop being such a whiner!

Should I have made the text even bigger that says everything up to Papa Roach (February 24th, 2015) is discounted?

but underneath you have Anthrax in brackets.

Yes, because that’s what came in March and isn’t discounted.

Does anyone know if the prices will drop more before the 22nd? I remember getting some stuff on the xmas sale and the following day there were reduced even more, was slightly pissed to say the least. Although I think the RS DLC has a fair price on it anyway. I’m holding loads of RS14 DLC in my cart along with Far Cry 4

If I remember from last time, dlc will go 50% on the last day.

Are we expecting these to go down to 50% off during the sale?

The heavy holiday hitters like Foo Fighters, Tom Petty, RATM, Bon Jovi, BFMV, and Jimi Hendrix are all part of this sale too. If you hadn’t picked up the full 12-pack of Hendrix, that’s significant savings.

I am, of course, biased.

Good one Dan. Hide BFMV amongst the heavy hitter list and hope nobody notices.

I had a good laugh. Thanks for that. :laughing:

Question: Now that the Top 40 is half complete, will there be a revised list, not including those who now have DLC?

While I’m not a big fan, I was surprised that Queen wasn’t on that list. I am a big fan and would like to know if B.B. King, Cream, Eric Clapton, and Bob Marley now make the list.

I’ve also been wondering about a newly revised Top 40. Purely out of curiosity.

Hey Elliott, might be a good topic for everyone.

Removing those artists who’ve had a stand alone 5 pack or more, who would everyone expect to be added to a new T40 if Ubisoft were to come out with one?

Time to go back and pick up those songs which weren’t must-haves but still sound very nice. Jeff Buckley is looking good now.

That’s my philosophy as well. I really like the Jeff Buckley pack. I’ve played Hallelujah in most all of my sessions since I bought it.