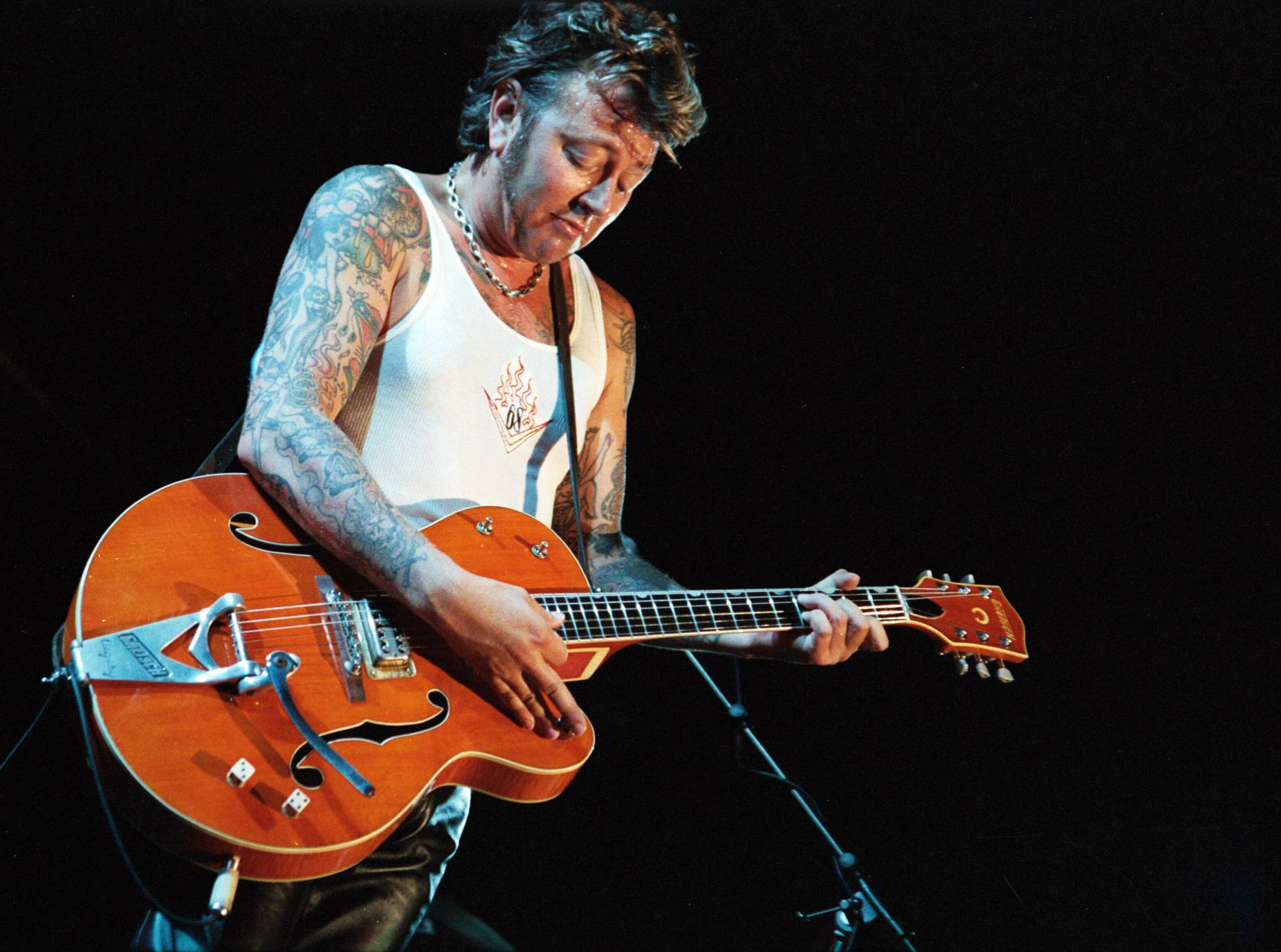 Today’s DLC is all about Rockabilly and there’s a definite surprise in the mix.

Also, guess what? They are all E Standard, no vari-speed for these hip cats.

Are you excited to hone your skills on these classic rockabilly tunes? Or is this just not something you are digging? Let us know!

I’ll take anything form any of the fore mentioned groups

You want Nirvana to get a single over a five pack?

This is an awesome pack right up with the blues pack. Love it abd need more of the diversity.

I would love the theme song to Ren and Stimpy. Happily buy this.

Depending on if you go by the date arranged or the date of the original composition, I think Bachsmith could be considered older.

Rocksmith maybe, but not “any music game ever”. That would be Cry Cry Cry from Rock Band (1955)

Now I want a Rockabilly 2 with some RHH, more Brian Setzer / Stray Cats, and maybe Bill Haley & His Comets. Maybe in a few months. 🙂

For some metalbilly, if you guys aren’t digging.. check out High Speed Dirt by Megadeth

This pack will be downloaded. Thanks you guys for all the Reverend Horton Heat drops! Definitely cool!

Bee bop a lula oldest song??????? erm have we forgotten Bachsmith so soon (okay technically not a song but….)

Bachsmith is re-imagined. This is an original track from 1956

I felt the same way, especially on “rock this town” although I prefer the original stray cats version. This version seems to have lost a few bass notes. Thankfully RS doesn’t penalize my score for adding them back in. Lol

as a devoted metalhead i have to say YES, I need to get these! I want to play these, hotdamn they are fun! I’m not into this music much unless it’s live (then I love it), but yeah, I want to learn this style, as i said, FUN to play!

Only queen… And that’s a strong maybe for a download..

Brian setzer!!! Now i can learn this song on rocksmith ( i learned a little on bandfuse).

I am curious to see the bass tracks in these !

Looks good. You can’t have too much Queen.

Now we please have another Hair Metal pack, a couple Punk packs and at least one Country pack? Not the pop Country, the real stuff.

That’s a nice surprise, my DLC dry spell is ending this week.

Nice to know you can get a band that has had a pack and can have a song in a mixed pack.

That gives me more hope for more packs.

What I would like -- giving no names for bands.

If an easier song pack came out, we could songs like Iron Man out of the way before they waste slots in band packs

Iron Man is pretty easy until the middle of the solo.

I can play the start of the solo but then it gets harder for me to play.

There’s so many areas that haven’t been touched (roots reggae, country, flamenco), and quite a few that have seen multiple contributions. I’m guessing the DLC schedule is based on when they receive artist/publisher approval and then complete the programming.

Good idea on the “Long Songs” pack. I was thinking they could just to a Rock Instrumentals pack
SRV -- Little Wing
Aerosmith -- The Movie
Van Halen -- Baluchitherium (<--yeah I know better than to list that, but oh well)
Booker T & The MGs -- Green Onions
Santana -- In A Silent Way (from the Santana III album) wait for it to kick in.

I’ve waited years to have Hello Mary Lou on a music game.

These songs remind me of my swing club days…

Would I dare say we have early Country on here?

I’d categorize Ricky Nelson as that

Always up for more Queen, the rest are nice as well.

I was hoping for Be Bop A Lula! And, Crazy LIttle Thing Called Love is one of those must-buy songs for me and most people. I will buy this pack.

I suppose I will have $11.99 less to spend on Steam Sale DLC later this week!

Just watched the stream. Thank you for setting that up! Sold on these songs now!

Wooow… This pack is a must for me. Excellent…

If you actually listen to the song, you understand why it’s on there. The song has a definite rockabilly theme consistent with the others, and it was originally written as a tribute to Elvis Presley.

I would really like to learn some Reverend Horton Heat.

^ this x5. Was hoping this pack had some of the revrund.

I’m so pleasantly surprised that there are so many RHH fans on this site. I’ve already requested several of their songs. I just saw them live last week with the Brains and Necromantix. What a fantastic show. There new album is great too by the way.

Maybe that means they’ll get their own pack some day.

I’m blown away one of the best packs ever

Excellent excellent pack! Love the theme and though some choices are surprising they all have my interest. So thrilled by the addition of these songs.

Yeah, I am still wondering how their inclusion is legit…

While I like the song, I kind of agree with you. The hint did say, “….classic Americana”. Although it’s rockabilly, it didn’t match the hint. Guess you’ve got to give ’em one.

Would have loved Stray Cats, but gotta say, these themed packs are ridiculously cool.

This was a fun pack speaking as someone who only plays bass but I really want a funk pack. How about a few times a year we have dlc weeks that cater to bassists?