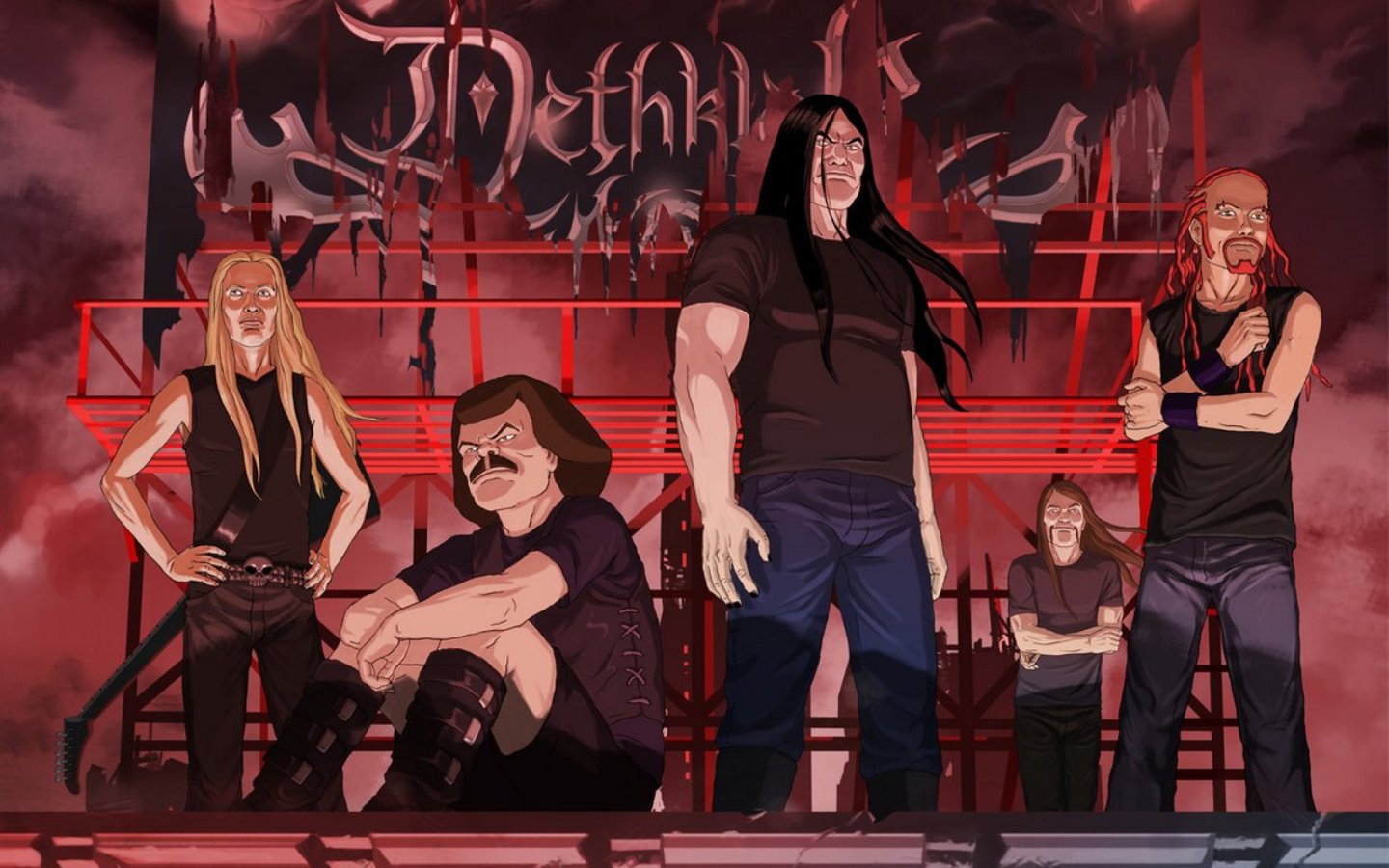 HELLO ROCKSMITH FANS, ARE YOU READY FOR THE MOST BRUTAL DLC OF ALL TIME?

It all makes sense now, because if you’ve watched Metalocalypse you know what happens every single time a Dethklok concert occurs… Thankfully both times when I saw them I left with all my limbs intact.

For the first time ever it was Brendon Small himself that revealed next week’s DLC via the @JonahRaydio Podcast live from @GrillEmAll!

“How many people here play guitar? I have a cool announcement to make, I’ve been working with the people that make the video game Rocksmith, I don’t know if anyone plays it here.. We’re announcing a whole Dethklok pack for Rocksmith, it’s because the fans have been saying it’s cool but where the f*** is Dethklok? So that’s the next thing, it’s going to be out on the 28th and they said I can announce it.”

Also according to @DanAmrich next week’s @Twitch stream will feature a 15 minute exclusive interview with Brendon! He’s a big fan of the game and wanted to get the songs out on the game but y’know… MUSIC LICENSING.

Maybe if you guys ask nicely @Rocksmithgame they will consider putting in some Dethklok or Galaktikon or Doomstar…who knows?

What songs await you? Well according to Brendon it’s these three BRUTAL tracks. Get ready to tune your guitar WAAAAAY down, because we are finally going to C STANDARD

I’d really prefer the non-album version from Guitar Hero II though, as much as I love Gene Hoglan and Mike Keneally

Simply epic, and we can only hope for more. Are you going to pick up the Dethklok Song Pack? Or is it simply too BROOOOOOTAL for you?

Go take showers and wash the shames off 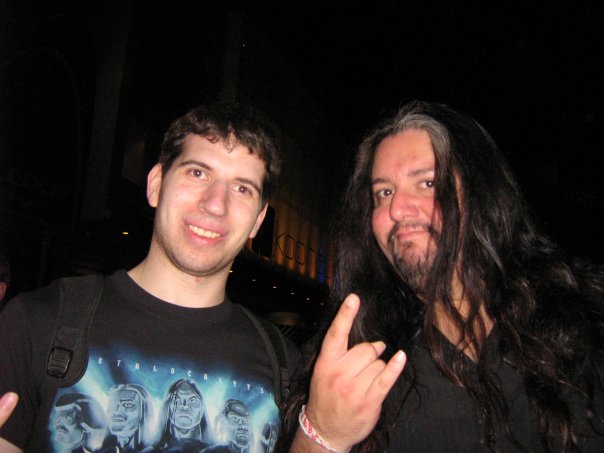 well, overall the dlc’s been great so all i’ll say is….. no thnx, i’ll pass on this one but i’ll still be here once the metal has passed thru the system and been flushed so we can get back to rock! \m/

For how many time have we been waiting for a C standard song? No One Knows…

Did you request it? http://bit.ly/rsrequest

Man the past 3 weeks have been all about the SUCK!!!

To be honest the thin lizzy pack was the only good dlc in the last three weeks and they kinda dropped the ball on that one by only going for a three pack and not including cowboy song or many other songs instead of dancing in the moonlight. Bush pack was not that great and the alt rock pack was god awful. so his comment was not that far off.

And what artists do YOU want on Rocksmith? Can’t wait to hear this one.

Molly hatchet, another rush pack, another iron maiden, Yes, Lynyrd skynyrd pack, opeth, stevie ray vaughn. queens of the stone age, pantera again, and coheed and cambria. The game could do with less mediocre alt rock from the 90’s. I mean, at least some candlebox or collective soul if they want to do more 90’s stuff. I’m super excited for this one though.

Good stuff, surprised you could hear it with your head so far up your ***. Everyone likes different music, my taste is close to yours.. but its ridiculous to tell rocksmith what dlc they can and cant release. This game is for everybody, and everyones taste is different. I have zero complaints with dlc.

Coheed and cambria would be awesome, been waiting for rocksmith to get welcome home for what seems like forever!

The Mastodon pack changed my perspective on how cool some heavy stuff can be, really liked it. If these guys offer something as fun to play, then I will get it. I couldn’t get into Lamb of God and I bought the pack with the same idea.

If you find that you do like Dethklock then look into Cannibal Corpse, they both make elegant use of the English language, pure poetry.

Honestly, anything from these guys are a welcome edition to my library. Favorite tracks? Murmaider, the Cyborg Slayers, Laser Cannon Deth Sentence (Guitar hero DLC!), Bloodlines…. and here’s hoping for the best song ever: HATREDCOPTER!

I’m going back to request Hatredcopter.

Super stoked for this pack. Love the show love the band.

Regardless of song choices, I will absolutely buy this entire pack. Been waiting for a Dethklok pack since RS1 and even more since Brendon Small started endorsing RS2014. Can’t wait to get shredding on this one.

Well damn!
I thought “Wonderful Catastrophe” was Ocean Avenue, because you know, it might be pretty, but floods are still a disaster

Haha ignore my previous post. Didnt see that the songs are already known. Really happy with the choices!! I need to rewatch the show its been too long

Count me in. Really hoping for this one http://youtu.be/_w-zL6NjBcE

Never heard of them, but I like metal, these sound fun to play, I’ll be getting them.

Never been a fan of this style of vocals but new tuning and sweep appegios alone are enough for me to want these songs, and on top of that they actually do have really great sounding guitar! Thunderhorse will be great, been forever since i played guitar hero 2

OH MY GOD!!! This is epic, awesome and BRUTAL.

This is going to be interesting.

cool. been waiting over a year for this pack to eventually make it to RS. i’m not super-pumped to learn Dethklok but if it paves the way for more technical death metal (although I doubt it will) i’m all for it.

i’m sure the songs will be fun to play and will actually require some work in riff repeater to get through the tracks in score attack.

I wish there was a new Metalcolypse episode that could promote Rocksmith. The plot should be in order to become more popular, Dethklok is contacted and convinced by Ubisoft to release their songs as DLC. The news is shown all over the world as billions of fans march to random gaming stores and buy Rocksmith albeit people die in riots of course. When Ubisoft releases the trailer for the DLC, fans have their faces melted because they cannot handle how brutal Dethklok can be.

Better metal snake or I walk… Haha this is huge, I hope someone gets a video of playing along with grandpas guitars!
Oh and stops copies me

So stoked for this pack. Exticed for the songs, new tones in session mode and C tunings. Hopefully we will see more c tunings.

Artist promotion is awesome, I’m even more excited for twitch!