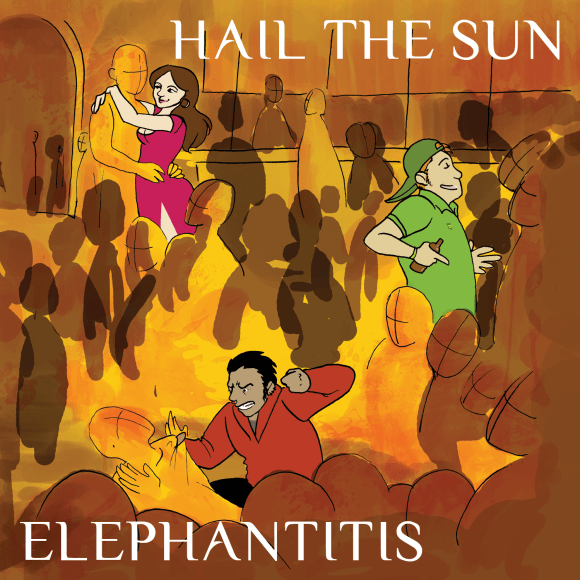 When Rocksmith came out it exposed people to not only a revolutionary way of learning guitar, but also the talents of the people that helped develop the game. Music from ex-lead note tracker Seth Chapla, A collaboration with Brian Adam McCune and Chris Lee on Ricochet, a surf rock track from Lead Audio Designer Nicholas Bonardi entitled Space Ostrich, or the insanely catchy riffs of Matt Benedict-Montgomery’s band VSThem with Six AM Salvation.

If you managed to score a double encore, you are most likely familiar with all of the six bonus songs included.

Shane Gann wasn’t even on my radar until I saw a tweet from a fellow Canadian:

With a bit more investigating I discovered some interesting tweets shortly after Rocksmith 2014 was revealed at E3:

Well the LinkedIn checks out, but what is this Hail The Sun band all about anyway?

Hail the Sun formed with three friends who have been playing together for almost a decade. The sound they formed has a seductive touch, that invites ones ears to come along. Each band member brings their own style to the party, which forms a chemistry that is much more than a compound. Influences include only life, and modern mishaps and rendezvous. Musically and lyrically these guys go at it more than rabbits, more and more defining a unique sound. As the globe keeps turning, the sun keeps shining, and they keep hailing, harder than ice. Thank you friends.

Hail The Sun is a progressive post-hardcore quartet who met in Chico, CA, while studying music technology. The overlap of influences throughout the group has led them to become one of the most dynamic and intricate musical acts to come out of the scene in decades. Formed by drummer Donovan Melero and guitarist Aric Garcia (who played in a death metal band in high school), the original idea for the musical direction was to remain high-energy, while allowing melodies and harmonies to be a prominent feature, rather than just screaming to portray intense emotion. The addition of Shane Gann and John Stirrat brought additional flavors, and the group began to stretch its creative legs, allowing itself to write parts and songs that were much more heavily influenced by jazz, funk, blues, fusion, and Latin musical styles.

From listening to their music on BandCamp I get some definite At The Drive-In with a heavy helping of The Fall of Troy, which means a bunch of people are probably going to be like “pass,” and I’m all like “ow my hand!”

UPDATE: We have confirmation!

So, Hail The Sun is going to be in a video game. And you can learn how to play or song. And we're… http://t.co/xQC6iXW1ux

What are the chances ow will be on rocksmith? I heard theyre other songs and i would be ecstatic with any of them, but ow definitely sounds the most fun to me

It sounds like somebody made Circa Survive listen to Irepress cover Mars Volta songs.

Yo Kid
Reply to  Jam Bone

@ Michael
I feel you bro!
This track is not for me
(No Mew, and no Mew on steroids kinda bands, please)

After hearing Hail The Sun -- Ow!, I can’t help but feeling that it sounds somewhat like Mew on steroids.. Don’t know why

This band is awesome. REALLY hoping to see a song by them on RS 2014. Stuff like this is right up my alley… along with some fast-paced pop-punk.

Wait a minute re read this and read “fellow Canadian” not sure why I’m just finding out you are Canadian.

Hey that’s my tweet! I’m almost positive Hail the Sun will be on Rocksmith 2014 maybe a a few other bands similar to them too. I’ve been getting kind of chummy with Shane on Twitter hoping he will do a interview with The Riff Repeater 😀