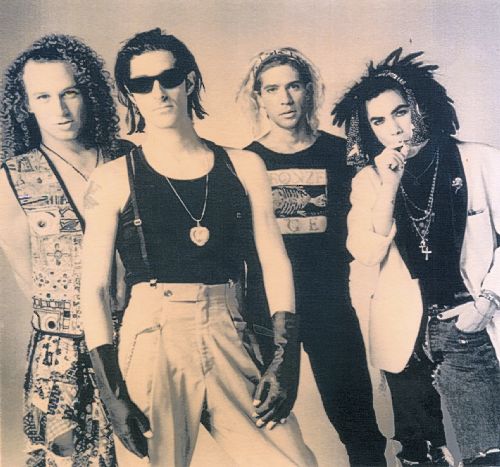 Big thanks to @SovietDuck for pointing this out to us! It’s been a while since we’ve had any DLC leak, and this time it comes to us courtesy of the PSN store. It looks as though alternative rockers Jane’s Addiction will be bringing a five pack to Rocksmith (presumably) next week!

Spanning their first (and as far as I’m concerned, only) three albums, there’s plenty of great parts for everyone here! From 1988’s Nothing’s Shocking we find Mountain Song and Jane Says. Moving on to the SpellCheck nightmare that is 1990’s Ritual de lo Habitual, we get one of the few songs that could give Ace of Spades a run for its money in terms of showing up in games, and that song is none other than Been Caught Stealing! Finally, we close off with two songs making their rhythm game debut off of 2003’s Strays: Just Because and the theme to the TV series Entourage, Superhero!

Will you be getting this pack, or is the lack of Stop! just too much of a downer? Let us know in the comments!

the bridge anthony kiedis stands under

i would love three days but it’s too goddamn long (10:56 minutes)

Wow, been waiting for this group,

Too bad I was scammed into the Xbox one version, and since you can’t trust the store, I guess I won’t be playing these guys either.

Admin
Elliott
Reply to  A. Merican

It’s coming to Xbox One on Tuesday, don’t worry. there seems to only be download issues with pre-xb1 DLC if that’s what you mean.

A. Merican
Reply to  Elliott

I refuse to be suckered . . a second time, nice try though.

They won’t get dime one until I am compensated for the stuff I have already paid for. They owe me a little over 400, and I will get it back, if I have to scream to the media.

Admin
Elliott
Reply to  A. Merican

Same. I’ve been requesting as I’m sure everyone has. Let’s just hope they aren’t holding out to the end of the year to release the much wanted DLC.

Wait is this for Jane’s Addiction fans or for fans of entourage, why wouldn’t you include all songs from the old albums that’s beyond me. Plus Jane Says will be such a dull song to play it might as we be the musical equivalent of wheel on the bus

I like Janes addiction. I have no idea what ‘entourage’ even is. I’m guessing it’s a reality show or something. I can’t be bothered to check either way.

Me too! It’s my favorite of theirs and I’ve been learning the bass for it with my teacher the last few lessons. Would have been great to have it here too.

Pretty cool. If this is what we are getting next week I’ll have to open my wallet.

Not gonna lie, playing the Entourage theme song is gonna be a blast.

Yay! Its about time. I knew if bandfuse could get them, then rocksmith could. I have been waiting for this band since I first picked up the game. Now if we could get a pack like this for STP I’d be good on everything.

Mountain Song is their only okay song.

Not a huge Jane’s fan, and Navarro’s eyebrows creep me out (my wife watches the tattoo reality show he hosts), but most of the songs in the pack have good bass grooves (although not very complex) and some other fun guitar parts. It’ll be a buy for me for some fun play-along.

Stop is missing, but I don’t think (as a pack) it would be up to par with the rest. They leave out/put in certain songs for a reason, ya know! I learned my lesson with Duran Duran and AFI. I’ll just enjoy this for what it is 😀

Well I am happy other people like the pack, but this is a total no from me.

Would’ve rather had “Three Days” and “Ted, Just Admit It…” than super hero and just because…. The Eric Avery baselines are iconic on those two Janes V1 tracks and the guitar parts are innovative and far more exciting --

ooh, they deleted the thread about this on the forums… I guess they aren’t happy about it. Fair enough, but the horse has bolted, no point locking the stable door now.

They sure did, now got to see if I got any points that might get me banned for making the thread, But did think it was going to be deleted as when there was another leaked there was not thread for it.

They can’t ban you for making the thread once, if you did it again they might have reason. I can understand it, they are trying to sell the Seether pack this week so they don’t want people saving their cash for next week instead.

I got a warning about it, but no points.

Personally I would have swapped ‘Just Because’ for ‘Stop!’ and kept ‘Jane Says’ because I like the song more…

Still a pack buy here though. Can’t wait for ‘Been Caught Stealing’:+1:

a band I have requested getting a proper pack, I am SO HAPPY! This is the first time this has happened! YES! Although Jane says is a great song it’s only 2 chords, i’m surprised they bothered with that one. But I’m NOT complaining, I’m buying the pack for sure!

Wait wait, The next week is Janes Addiction?! Shut up and take my money if true

Thanks for the mention. All the songs are really fun to play and reasonably challenging. except “Jane says” no idea why they choose such a long boring song instead of stop.

I’m thinking now that there is a deal that song can’t be in other music games, as it has only been in guitar hero.

But surely the 5 year exclusivity would’ve finished by now. I guess it could’ve been renewed but given we’re not talking about Metallica here then that would likely suggest a new GH game is inbound.

Only hope it is Guitar Hero Iron Maiden 😀
I really hope there will be a new guitar hero game, I really loved them, it was fun to play the setlist and have fun, but I’m hoping for me of the ancient mariner if they make GH7

I second that opinion.

No deal like that. Cherry Pie and Seventeen got in Rocksmith.

agreed, great song, but dull as hell to play. It’s 2 chords!!! So stoked on the others though!

Keep in mind: one man’s “long boring song” is another man’s challenging, yet attainable track.

I’m in for Jane Says, Mountain, and Been Caught Stealing.

Once you’ve learnt the riff, it’s so easy. But I don’t mind as I used to play and sing that one anyway, so if you sing (or try to) as well it’s not boring.

Time to cross another GTA San Andreas song off the list.

Why no Stop, I guess I’m going to have to wait for ever for dlc I like.