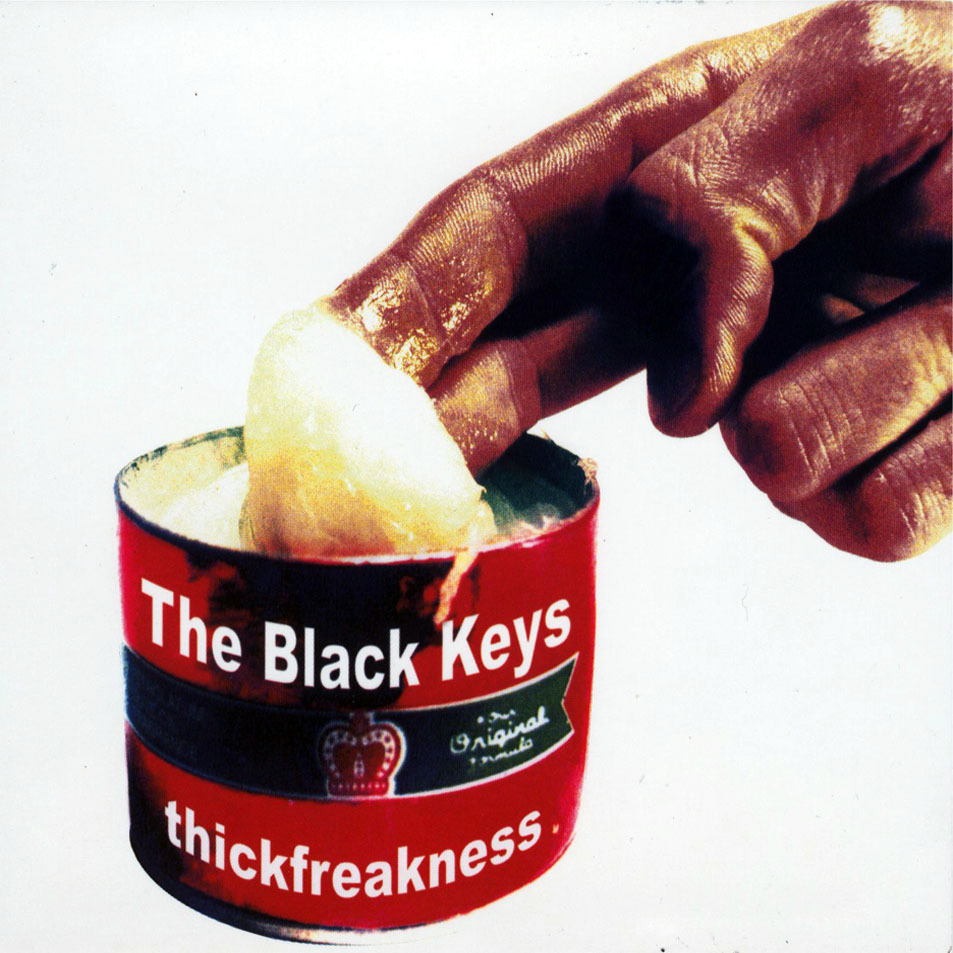 This week’s DLC is the return of @TheBlackKeys, and it’s a five pack! This means that TBK is now tied with Foo Fighters for the second most songs playable in the series (11), wonder if an artist will ever tie or beat Jimi Hendrix (12).

The song pack contains a good variety over their career with the title track off thickfreakness (2003), Your Touch off Magic Potion (2006), Howlin’ For You off Brothers (2010), and finally Little Black Submarines and Lonely Boy off El Camino (2011).

All songs are in E Standard and have a Bass arrangement

Are you excited for the second coming of @TheBlackKeys or has November kept you waiting. Let us know!

I want more soundgarden/audioslave/chris cornell…or more Alice in Chains or more STP or more Pearl Jam…or Chili Peppers…I need someone else to request these for me because I would commit sepuku before I would start a facebook/twitter account. Thanks. Oh yeah…sorry about that last post…I meant Elliot not Ellison. My phone autocorrects things that make no sense.

Yeah Elison…I like your playing just fine…If only you had some soul. LOL.

this might be it.
this might be the point where the dlcs are actually fun for me and i might get into spending money.
now some real old blues shit and metal and i’m a happy rs14 user again. this year was basically crap for me….i don’t care for slayer before you even want to mention that one.
the dlcs need to be focused on guitar heavy music.(not heavy music! i mean even though i’d love a metal smith 2016)

How about some bass driven dlc? Funksmith2016! xD

Happy Thanksgiving y’all. Lets give thanks for 40% off steam sale. I just picked up Oasis, and Billy Talent 5 song packs. Awesomeness!!!

Wow, rockband just got a van halen pack while rocksmith gets this crap, better step it up ubi, or sell rocksmith off to ea and harmonix.

Omg bite your tongue, lol. Wasn’t Harmonix involved with bandfuse? I have had rockband-rocksmith marriage fantasies in my head for awhile though. I want a full band online experience with real instruments being played (and heard). I understand that may not be possible at this time technology-wise.

Then go learn how to play a no string piece of plastic with buttons… Lol…. Step up your game brah!!

I already know how to play a no string piece of plastic with buttons (its a lotta fun) and I did step-up my game with rocksmith. There are a lot of good drummers who it is my pleasure to play rock band with. I’d love to play my (real) bass along with them.

Harmonix was not involved with bandfuse, if they were, rocksmith would have died and bandfuse would still be up and running, and it would have been a way better game as well.

Actually they were involved, they licensed out their vocal engine and allowed them to use their graphical assets for Guitar/Bass/Vocals (the icons).

the keys are crap? ffs i’d love to check peoples cd collection after they spill nonsense like this….
and van halen? srsly? ok…i won’t stoop to your level in my comments about van halen. i’ll just say “i don’t really care for them” see? that’s not hard and it has the same value in terms of information than your little…”rant”.

For those interested in more Black Keys check out Summit Guitar on youtube. He does really good, no nonsense, straight to the point lessons. He does a few Red Hot Chili Peppers and a few others also

Sorry about all that. The cork popped and my opinion spilled out.

These guys are great musicians. I get a kick out of the ridicule all the time. White guys playing the blues?! Seriously…they play good blues. There have been 100’s of great blues artists who were WHITE and blues in life don’t know no color baby! Their songs are well written…if repetition is a problem, the Police would have never had a number 1. If difficulty mattered Neil Young would never have made a name for himself. There is talent, creativity, agility, speed, and artistry. Everyone who plays has varying degrees of any of these and noone is perfect at all. Seriously though…if you are hung up on whether these guys are hipsters gimme a break. They have good sound. I like everyone’s opinion normally…but don’t give me the race nonsense. You people who say that they have no soul sound like abstract art critics talking about the emotion created by the use of red triangle to represent true agony…or a wine taster…you are poseurs to knowledge that you don’t have. I like their music but agree that it could be unlikeable. So there. But whatever, I’m just Dave.

Agreed!!!… What would the haters have been crying about if the would have put a song like Lies or Things aren’t what they used to be… Obviously they only know the band by the songs played on the radio??

Kind of like how I used to read through comments on my videos saying Buckethead had no soul in his playing e.e

Oh nice! A black keys song with a groovy bass line that kinda rocked (“little black submarine”, although you have to wait for it), lol. That was fun 🙂

What is it with the black keys and fuzzy sounding guitars? I might not hate the band if they had some variety. People give kirk from metallica a hard time for overuse of wah, but he has sounds like the most creative guitarist ever compared to the guitarist in this band.

Will we ever get Volbeat -- Hella Good and No Doubt -- Another Day, Another Way?

Not a huge Black Keys fan, and I’m really surprised that they got a second pack. That said, this is definitely more interesting than the first pack, and Your Touch is easily their best song IMO. I’ll definitely be in for that, and will probably pick up a few of the others down the line.

Next Girl and I Got Mine on RS1
Tighten Up as RS1 Single
Black Keys 3 Pack with Gold On The Ceiling, Mind Eraser and Just Got To Be.
Black Keys 5 Pack (2nd Pack) with Thickfreakness, Little Black Submarines, Your Touch, Howlin’ For You and Lonely Boy.

Yep …. I forgot rs1 was just a song download

3 of 5 aint too bad when I was planning on skipping this one. Its been a good (expensive) month. I wont be able to watch twitch tonight. Could someone ask Dan when the December clue will be coming out given the holiday scheduling?

Looks great… Can’t wait to get home tomorrow to play those songs….some of their earlier stuff could have made the list, but there always THE BLACK KEYS #4 dlc pack???

Sold! I’d love to see 10 cent pistol in the pack but this will do.

Your Touch made it!

I doubted this song would be on here, but it is by far my favourite Black Keys song. I can’t wait to tear into this pack.

Glad to see they all have bass arrangements. I’m in.

The bloody song i want is never bloody in dlc.

Well you either are picking it up or you aren’t

Disappointed there’s nothing from Turn Blue but buying the pack anyway.

Glad for their fans, but Im passing. The stuff already in the game and in the first pack was pretty basic to me, and everything above sounds similar. After a week of bachsmith Im a little spoiled. Ive always wondered what this band would sound like with a dedicated lead guitarist to add variety, but they seem to be doing just find with the minimalist approach. I even heard them in the last disney flick

Sounds like you haven’t listened to Turn Blue. They went complete opposite of minimalist.

Pleasantly surprised with the charts for black submarine and los lonely boys. Much more going on than any of their existing rs stuff. Curious about the rest.

thanks for the recommendation Bob, I’m listening to the album on youtube right now, and really enjoying it. Did they add a bass player? Its crazy to hear the evolution in his playing from the simplistic riffing in the earlier stuff. Ill request some from this album for sure.

Yup. There awesome. Though my favorite album is still the first.
Though I love most/all of the later stuff as well.

Technically, if you count all songs by Dan Auerbach (sp?) then he might be tied with Hendrix as far as songs in game then…

If they were to ever get rights and release a metallica dlc pack, they could easily beat the number of jimi Hendrix songs

But who would care…..

Lol at “boring hipster music”. 😛 I don’t have a neck beard but I like the keys. Submarines should be a bit of a challenge.

I like the selection, gonna have a good time with this pack