Hope you are enjoying the insane shopping! As we end this month let’s back at the DLC that Rocksmith hath given.

First, here are the results of last month’s DLC poll: 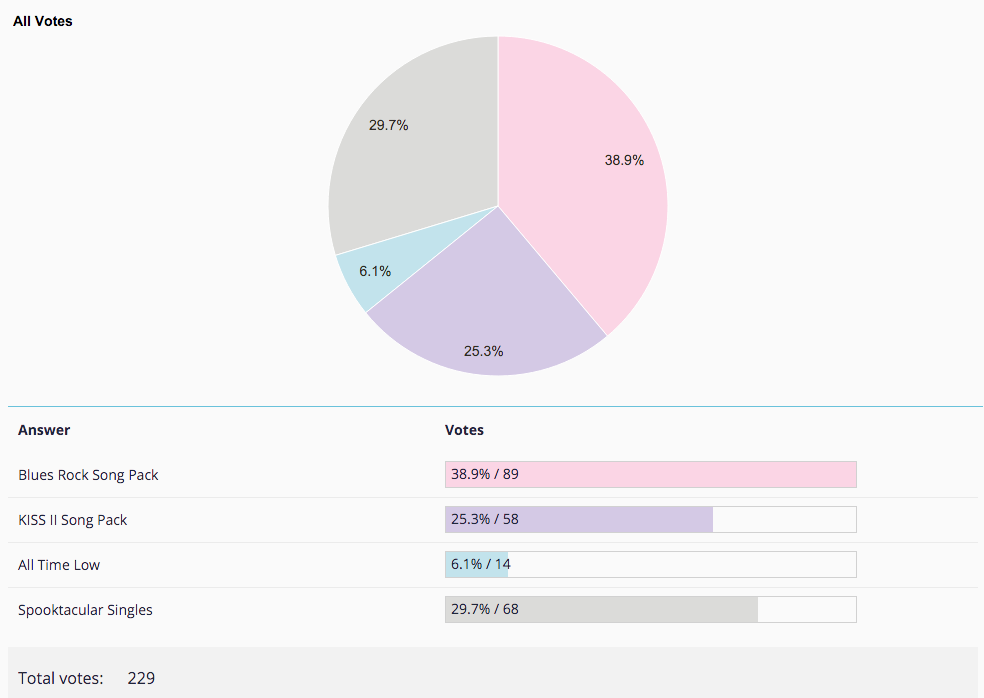 Looks like unsurprisingly The Blues dominated followed by the Spooky singles which narrowly beat the return of KISS. Last but not least is All Time Low, which personally I think more people should give a chance, but that’s just me…

“maybe it’s not my weekend but it’s gonn-“ sorry, still stuck in my head!

November was the second coming of many packs, first we had yet another Hit Singles Pack featuring artists such as David Bowie, Foghat, Def Leppard, and Wolfmother! The next week we had the amazing bass talents of Matt Freeman bestowed upon the Rocksmith community courtesy of @Rancid, the awaited return of #Bachsmith, and finally a second pack from @TheBlackKeys!

November was a month that had a lot of great Bass charts, it’s going to be hard to cover them all with artists like Rancid, David Bowie, and Foghat in the mix, but here’s a few.

There’s no way you skipped this one right? I mean you own a bass…

You wanted a challenge right?

Outside of Bachsmith guitar wasn’t too challenging this month, and even so it was way more accessible than the first pack. Despite that there was still some tasty licks to be learned from The Black Keys, some much needed Ska flavoured guitar from Rancid, and a great slide guitar focused track courtesy of Foghat.

Some great guitar parts in this one

November was all about E Standard. Probably the most tuning friendly month ever with only two deviations (or three if you count Capo Required).

This all brings us to the usual question.

Sweet, my Ziggy Stardust video made it up there! Thanks for the added visibility! 😀

Great site, by the way! I’ve been a lurker here so far, but you were one of my inspirations for doing videos of my own in the first place, so thank you!

To actually answer the question, I’m a big fan of mixed packs in general. I love the variety! But I really liked the Black Keys II pack, so I voted for that one.

I would love some Pixies, Marilyn Manson, NIN, Korn if possible. Another Doors pack would be sweet.

ive been playing it through, could it be the ending in “hotel California”?

bars don’t line up for that

thanks Elliot, it was a hip shot going by air, whatever it is, it definitively sounds familiar.

My guess would be “Bark at the Moon,” (fingers crossed for ozzy pack)

Would have voted the Hit singles mainly for Def Leppard if it wasn’t for Bachsmith. Every pack had something I liked. Good month, Bravo Rocksmith team

Love the video of the eleven year old rocking the bass on maxwell murder. Was a decent month bass-wise for dlc. I have to say that I preferred the first bachsmith to this one and that I won’t be sad if we don’t get any more black keys songs for awhile (or ever). More classic rock/prog or funk/soul please rocksmith.

I thought this was a great month for DLC, but then, I don’t whine and cry when I don’t get what I want.

I would have given it to The Black Keys if we had anything from Turn Blue or some of the more fun tracks from when they started recording with bass (Nova Baby, Sinister Kid).

It is still a good pack, and I’m glad we got the acoustic to electric Little Black Submarines (great to see live), but without stronger songs I have to give the edge to Bachsmith 2.

We haven’t seen Van Halen,tool or Motley crue yet

Good luck with all of those making rocksmith!

Van Halen just had a dlc pack on rockband, I’m sure they have a bigger budget for dlc than rocksmith but it is possible.

Try to hold back your tears.

I was replying to YYZ.. I hate when the comments screw up.

Imo this month goes like this
#1 The Black Keys ll (3 great songs I knew and liked and the 2 older songs that are already favorites of mine now, Def need to pick up the older albums)
#2 Bach smith ll (so much to learn from this pack, best deal of the month in terms of what you get for $6!)
#3 Hits singles ll (I passed on it, but slow ride looks awesome)
#4 Rancid ( I passed on it, decent songs but just not what I really wanted for a punk or ska band)

‘s OK. Nice List, Only i would move Rancid to no.3. But overall pretty spot on.

Gold on the ceiling is a pretty good one to play.. next girl and mind eraser are both good for real beginners to get a bit of a groove going too. But I agree this pack really is excellent, just wish weight of love or gotta get away would’ve made it..

Cmon Ubisoft give us a Kings of Leon pack…. Great guitar riffs and solos in just about every song…. And there is a lot of bass guitar also ???

Wishing for only one band really sets one up for a weekly disappointment.

Can you list some bands that you’d like to see show up in December? I find it hard to discern exactly what you want from Ubisoft. Also would be great if none of them appear in this list.

cool amended list Elliott. The Def Leppard one needs a (still waiting on the main course) asterisk. Makes me excited about what might come out in December. Id be’d amped if just about any of the remaining groups made it.

Sure:
A Perfect Circle, Jimmy Eat World, John Mayer, Chuck Berry, Cream, The Stooges, Sex Pistols, Steely Dan, Joan Jett, Manson, Chevelle, Silvers Pickups, The Decemberist, Silverchair, NIN. I have a range of items that I would like to see, but it will probably never happen and I’ve come to accept that

My number one choice! Would love to see another pack from The Cure. Definitely.

Would love to see a pack from The Cult.

More Pearl Jam would be great.

Jesus and Mary chain would be ace!

Maybe sneak in an indie pack with Lightning Seeds or Teenage Fanclub.

But that’s just my opinions. Some of you may agree and some may pull your hair out at my suggestions.

Mainly, keep up the good work! Most Dlc is between acceptable and amazing. Anything else and I don’t buy it. Simples!

its so 80s, but I dig me some flanging and phasing

As a massive fan, I could happily buy their entire catalogue for Rocksmith.

They could call the gargantuan pack RobSmith 😉

The ones that probably will appear: Tame Impala (more), Pearl Jam (more) and The Mars Volta.
The ones that COULD appear: King Crimson, Andrew Jackson Jihad, The Flaming Lips, Rush (more), Arcade Fire, Yes and Radiohead (more).
The ones that never will appear (due to one reason or another): Godspeed You! Black Emperor, Swans, Pink Floyd, Microphones and Led Zeppelin.

I posed a similar question back around the April-June time frame. Was curious if Ubisoft had an updated list. Currently it seems there’s a Top 17 Most Requested list of artist who’ve yet to appear on Rocksmith.

I’d bump the list back to 40 with the following:

Honorable mention goes to James Taylor, U2, and the jazz group Fourplay.

EDIT -- Pulling STP off the list as I forgot we actually do have a song by them. Throw James Taylor in there instead and lets put, the David Lee Roth band on the wait list. (Eat Em and Smile)

I feel The Black Keys were the better one this month and the only one that needed a repeat pack. Hit Singles II felt like they were cashing in the previous hit singles pack. And Bachsmith felt soulless for some weird reason. The reason i think this is because Black Keys were poorly represented, IMO. I mean, there’s I Got Mine, Tighten Up and Just Got To Be and that’s… really it, actually. With this one they got a beter representation of their career with older songs (Thickfreakness and Your Touch) and their newer songs (Lonely Boy, Howlin’ For You and Little Black Submarines). Oh and Rancid is OK. Nice bass by the way.