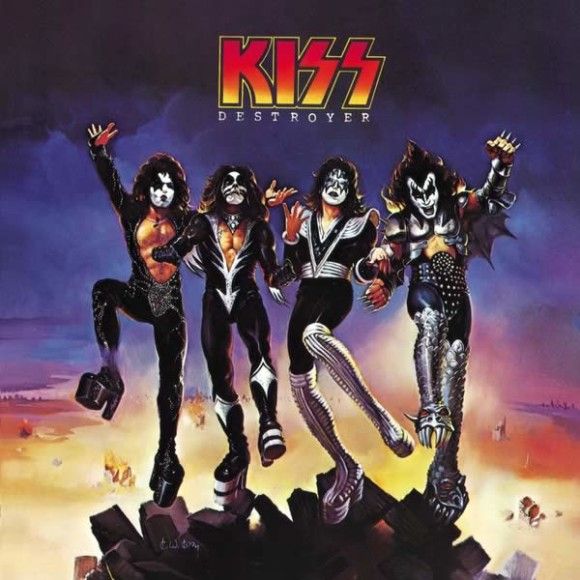 Guess who announced their DLC early! Man, I knew their was a reason I liked the Japanese Ubisoft page! (well, actually, it was mostly for the fact that they announce the J-Rock DLC)

The Hottest Band on Earth are making their way to the Rocksmith 2014 DLC store, joining the party rock classic Rock and Roll All Nite. We were made for loving these KISS Klassics by the band forged in New York Rock City, they’re so hot that they can even set Heaven on fire!

Detroit Rock City of course dates back to the first ever Rock Band game where it managed to be one of the few songs that featured a bass line (slightly) more complex than the guitar, and I Was Made for Lovin’ You is one of only a few disco songs to ever be featured in Guitar Hero. Amazingly enough, Ubisoft managed to find a big KISS song that hasn’t been featured in one of the many KISS packs across the many rhythm games. That song, of course, is Heaven’s on Fire.

Are these the KISS songs you hoped for? Or is three songs not nearly enough? Let us know in the comments below.

Singles have to throw several groups, such as the release of the game.

even though it was a nice dlc, I keep saying 1 dlc per week is not even close to be enough…

The top 4 is never ever bands.

I really wish people would stop saying so and so will never be in music games.

Meaninglessly subjective list. But I noticed you left off No. 100 -- The Black Eyed Peas. Deliberately??? Are you suggesting that they aren’t one of the greatest bands in the history of rock? Who here doesn’t want to play “My Humps”?

Zappa!! But how is Bob Marley & the Wailers a rock band? Actually, it looks like a lot of these aren’t rock bands.

I can tell there are a lot of younger people commenting on Kiss. Does anyone remember “Kiss Nation” ………
Kiss is one of the best selling bands of all time.
The members of kiss aren’t musical geniuses, and they never lost their garage band sound, but they must have done something right.
Kiss (more often styled as KISS) is an American rock band formed in New York City in January 1973.[1] Well known for its members’ black and white face paint and flamboyant stage outfits, the group rose to prominence in the mid to late 1970s with their elaborate live performances, which featured fire breathing, blood spitting, smoking guitars, shooting rockets, levitating drum kits and pyrotechnics. Counting the 1978 solo albums, Kiss has been awarded 28 gold albums to date, the most of any American rock band.[2] The band has sold more than 40 million albums in the United States, of which 45 million have been certified by the RIAA[3] and their worldwide sales exceeds 100 million records, making them one of the world’s best-selling bands of all time.[4] The original 1973–80 lineup consisted of Paul Stanley (vocals and rhythm guitar), Gene Simmons (vocals and bass guitar), Ace Frehley (lead guitar and vocals) and Peter Criss (drums and vocals). From Wikipedia

And what are you into Jameson?

I can only hope for something better next week. 👿

Hottest band on earth? Are you kidding me? KISS is a shitty band better known for their stage show and crazy antics rather than their musicianship. I’ll pass on this one as well. The only thing worse than this would have been a U2 song pack.

“hottest band on earth” is just part of Kiss’s “crazy antics”. And I think most people realize that Kiss is more show then skill, but that appeals to some people (like pro wrestling)

As for U2…. that would be an awesome pack. A definite buy for me

Hey, i remember that game.

I don’t think you meant to, but you made that last part sound cool as hell

Don’t hold back, tell us how you really feel!

I guess not everyone’s gonna be happy with the dlcs every week. Some people are kiss fans, some ain’t (I’m slightly on the fence with this band) spose it all falls on how many different styles of playing you want to learn….NOW GIVE US SOME RANDY RHOADS PLEASE…

It’s a pass from me. Can’t stand Kiss and also dislike Rock and Roll All Night… Only the 3rd pack I haven’t bought.

Maybe he’s still focused on GH (he was involved a lot with Warriors of Rock). There have been strong rumours of its return coming this holiday season and being announced at E3 2014.

I’m so happy that there are only three songs. Buying 5 songs DLC every week is too much for my wallet.

Detroit Rock City is a definite grab, but I’m a bit disappointed by the absence of Strutter.

DRC is the only one worth getting

3 songs as expected.Not bad but neither great,maybe in a couple months….

Why do you come here?

why do you? Surely it’s not because Kiss is good band. The fact that they can even call themselves a band says a lot about how lenient our society has become. By the way, Bob has it figured the f**k out. Kiss is what happens when you let A**holes rule over you with their clear channel iron fists! You know who else gets payed to dress like women and perform Karaoke? Drag Queens.

Has become? Clear Channel? You know they’ve been around for 40+ years, right?

So disappointed in only 3 songs. I don’t know who decides on the songs and how many to do, but they goofed (again).

I assume 3-packs only exist because 1) they need time to do Japanese DLC, and 2) some bands may have higher licensing fees

I’m with u man, 3 SOAD songs and now this… I’m seeing a 3 songs Slayer pack too…

As I understood the team who is creating Japan DLCs is a complete diffrent team located in Japan.
So that should not be the problem. releasing 3 song dlc may have one simple reason:
Rocksmith/ubisoft dont expect big profit from those bands. They do analyze the user statistics and trust market charts.
Nothing wrong about that … Only … The quality of songs is horrible in some dlcs. If they cant license better songs, they
Better should release nothing. Around 3 bugs for a song is a big price and nobody can tell me that its so much work to create/modify/test the tabs (these guys are profs). I expect better … I dont wanna say that rocksmith developer do make lots of profit … its ubisoft and they don’t want us to look behind the certain. And these KISS songs should better played on plastic guitars with colored buttons and nowhere else

Not a big Kiss fan… I like DRC so, I’m glad we got that one (and look forward to the bassline). I don’t know the others just from the titles but, I bet I’ve heard them before.

I had high hopes for “lick it up”.