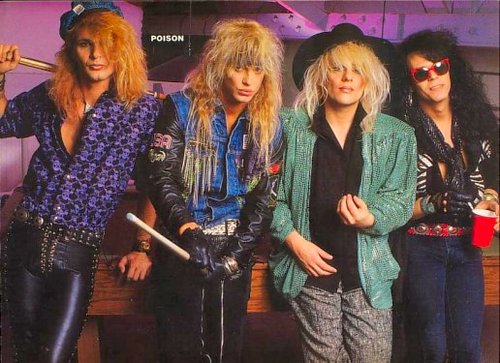 One of the greatest music game traditions is the early February power ballad pack, and now our friends at Ubisoft have delivered one to us! It’s time to bust out the acoustic, the hairspray, and your sensitive side, because the power ballads are here!

Opening with Boston‘s 1986 classic Amanda, which is making its rhythm game debut, we already know exactly what kind of sweet, sweet lovin’ we’re going to get with these hits! It may be a bit simpler than the other Boston songs we’ve gotten, but it still gives us a tasty solo and a sweet riff!

Next up, Cinderella brings us their 1988 ballad Don’t Know What You Got (Till it’s Gone)! Another song that’s not too much on the complex side, but still features a great solo. Also, the vocals in this song are probably the closest we’ll get to AC/DC for a while.

Extreme‘s 1990 hit More Than Words comes to us next. If you thought the bassist was going to have to sit this one out, you’d be wrong! That’s right, there actually IS a playable bass part in the song! The big thing, however, is the deceptively simple guitar part. If you thought this was just going to be a nice and easy acoustic song, then you’ve clearly forgot that Extreme are the home of a little guy named Nuno Bettencourt, and if there’s one thing that man can do, it’s make a crazy solo!

Tesla‘s up next and they’re bringing 1989’s Love Song to the table. You’ll be happy to know that this isn’t the radio version that Guitar Hero got, but is the proper, full version! Hooray for acoustic intros!

Finally, we have the crowning achievement of not just this pack, but of all power ballads. We’ve got a soft, sensitive acoustic section with lyrics about heartbreak, we’ve got an electric-but-not-too-electric chorus, and NUMEROUS sweet solos! That’s right, it’s none other than Poison’s legendary 1988 tune Every Rose Has Its Thorn!

If you don’t like downtuning, there’s still plenty of selection here for you, so that’s very good news for those people!

Will you be serenading that special someone with these five tracks? Or do you cringe at the thought of owning any of these? Let us know!

Is there a forum thread for this weeks clue?

Clues and their discussions are always in ubisoft’s rocksmith forums under DLC. Starting the Friday Prior to the Launch. The discussions go on from there.

Sorry to throw this out there again, but today is the day. It’s moment time.

70 years ago today a Natural Mystic was born. A Survivor, his Legend, his message continues to Satisfy Souls to this day. Physically he may no longer be with us, but best believe he is an Iron Lion in Zion.

’bout time for us to learn the riddim of the islands.

(made the request with UbiSoft. Hope they were listening.)

Definitely interested in the Tesla track as the only part of the song I never learned was the high end of the intro and the the trills. Also, I never focused enough to really figure out and learn More than Words. Got the notes now so I guess, no excuse.

1) I’m excited for all the people eager to play these songs. This is a big release, and while I am personally only interested in the Boston track, I am happy for you guys!

2) What is wrong with the lead singer of Cinderella’s voice? Blegh. Tried to watch the video to check out the guitar work and had to hit mute haha

3) Tina Morgan is just a troll people. Stop responding to her stupid posts about how everything sucks. You are only fueling the stupid, stupid fire.

I’m half curious now to know what music she does like.

It was her boyfriend… For sure…

Please say more of these are coming next week…

I just can’t agree with ubi’s choices for ballads. I think a better “pack” would have been
Tom petty- here comes my girl
Scorpions- still loving you
Danzig- blood and tears
Eagles- love will keep us alive
Gnr’s- don’t cry

Is anybody else not seeing “Amanda” in the steam store?

Has anyone noticed that unless your girlfriend’s name is Amanda, the only song that would work well for serenading purposes is More than Words?

If her name has three syllables and ends with an “A,” like Christina, Elena, Melinda, Diana, Katrina, etc., substituting the name might work.

If her name has or can be shortened to two syllables with an “A” at the end, like Linda, Kyra, Hannah, Tina, etc., delaying the entry of the name by a syllable would work seamlessly as well.

If I serenade the roaches in the apartment that come around from the building block, will they possibly buzz off to greener pastures / apartments?

all this talk of serenading, make sure you pay attention to this first. https://www.youtube.com/watch?v=Y3Qgp_rGJYM

Cinderella on PS4 says it’s downloaded can not find it. I’ve shut down numerous times and nothing. Anyone else have any issues? How the hell do you delete Rocksmith 2014 DLC?

I’m having the same issue. You’re not alone. I’m calling in the a.m. ad I’ll post if there is a solution.

Is it possible to love them AND cringe at the same time? ‘Cuz I’m doing that. They are sappy but awesome. I was hoping for “Amanda” with the Boston pack… glad to see it added now.

I spend too much on this game (but at least I’m still playing it and getting better). I’m actually relieved when a week goes by that I’m not interested in the DLC -- means I get to save money that week. But this isn’t one of those weeks.

In for Tesla, Extreme, and Cinderella. Loved those tunes, and they’re approachable for those of us who will forever suck at the guitar.

I don’t know why people bother wasting their time to post all these “I hate this DLC” posts. If you don’t like it don’t buy it and go practice the songs you already own. Oh, maybe you’re a guitar virtuoso and god’s gift to music critique-ery and you can already play every worthy track available blindfolded with one hand tied behind your back.

If that’s the case, then please carry on. I’ll be getting probably all of these and I already have the Bon Jovi and the other 80s singles. Yeah, some of us like this crappy music and are glad its in the game. There are plenty of tracks I don’t like and didn’t purchase, so hopefully the injured souls that can’t bear that these were released can enjoy those.

I don’t know why people bother wasting their time to post all these “I hate this DLC” posts.

Users here are free to share their opinion as long as it doesn’t insult or demean other members on the site or contain bigotry, racism, intentional homophobia.

Music is a personal thing

HERE! HERE! No one says you have to like the DLC every week, get the stuff you like, don’t get the stuff you don’t like. I’m just glad they keep putting out more songs for us to learn. Keep requesting songs YOU like and I’m sure your turn will come.

But for goodness sake just shut up and play!

I think it’s funny when people make fun of bands that I like. More humor and less sanctimony go a long way. Maybe that’s why people keep coming back to this sight. We’re in this shit together. Just be glad you’re not an inbred dickhead like the people that don’t like your personal taste in music.

Plus, I messed my wrists up a couple of years ago, so I can’t play as much. funny story

Just so you know, use a cattle prod and not a little stick or just don’t do it.

I cringe. I hardly could listen to the rs dlc commercial in full. I truly hate 85% of 80’s power ballad / dudes who look like chicks music, I’m glad it came out because what I hate someone loves and what I love someone hates.

I’ll be getting “Amanda” for sure because this game needs more Boston. I really don’t think I like the others offerings.

Are you on steam? Because I can’t see “Amanda” in the store would be good to know if I’m not the only one…

Pretty good songs but no money tho 🙁

Wow, this sucks! Is the hint for next week: “Backstreet’s back, alright!” and the cover of the Free Willy Soundtrack? Are they getting their music from “Now that’s what I call music: 1980’s” Cassette tapes?

Shock of all shocks, a bunch of people complaining on the internet because a mass produced product doesn’t cater to them personally. Pathetic. This pack is incredible and full of hits.

I was looking forward to the Extreme song, I completely forgot that it’s way too long and boring as hell after 3 minutes so balls to that. I’m just getting the Boston track (such good basswork) and the Tesla track. Because i like it and it was a rocking solo in it.

What, could they added So Far Away from A7X as that song has lot of acoustic guitar, also Dear God does as well, I don’t know what Power Ballad means.

No songs for me this week, I like 2 bands but they are songs I don’t know, but that what’s riff repeater videos are for.

So, it’s “more than words” in the end, but with a bassline. Good job Ubi guys, I guess nobody was expecting that. Thank you for that and I hope you have negociated more than a bassline with Nuno that we could see soon ! ^^

That Extreme song has touched more girls than Bill Cosby. I knew a fellow who went to great lengths to make sure that his mix song cassette tape played that particular song at the end of his dates.

I’ve never listened to “Don’t know what you got…” before reading this article, but I honestly burst out laughing when I heard that hilariously bad scratchy “Axyl Rose meets Brian Johnson meets Elmo” singing voice.

I was going to play these songs, but I never grew up because I died in an accident.

Hahaha… That is never going to get old

Hold on. I was very much mistaken.

Ahh, but would you have said that if there was a def leppard song in the pack?

He never specified which type of accident it was.

My family didn’t have Nationwide Insurance, so I died from drowning in a bathtub.