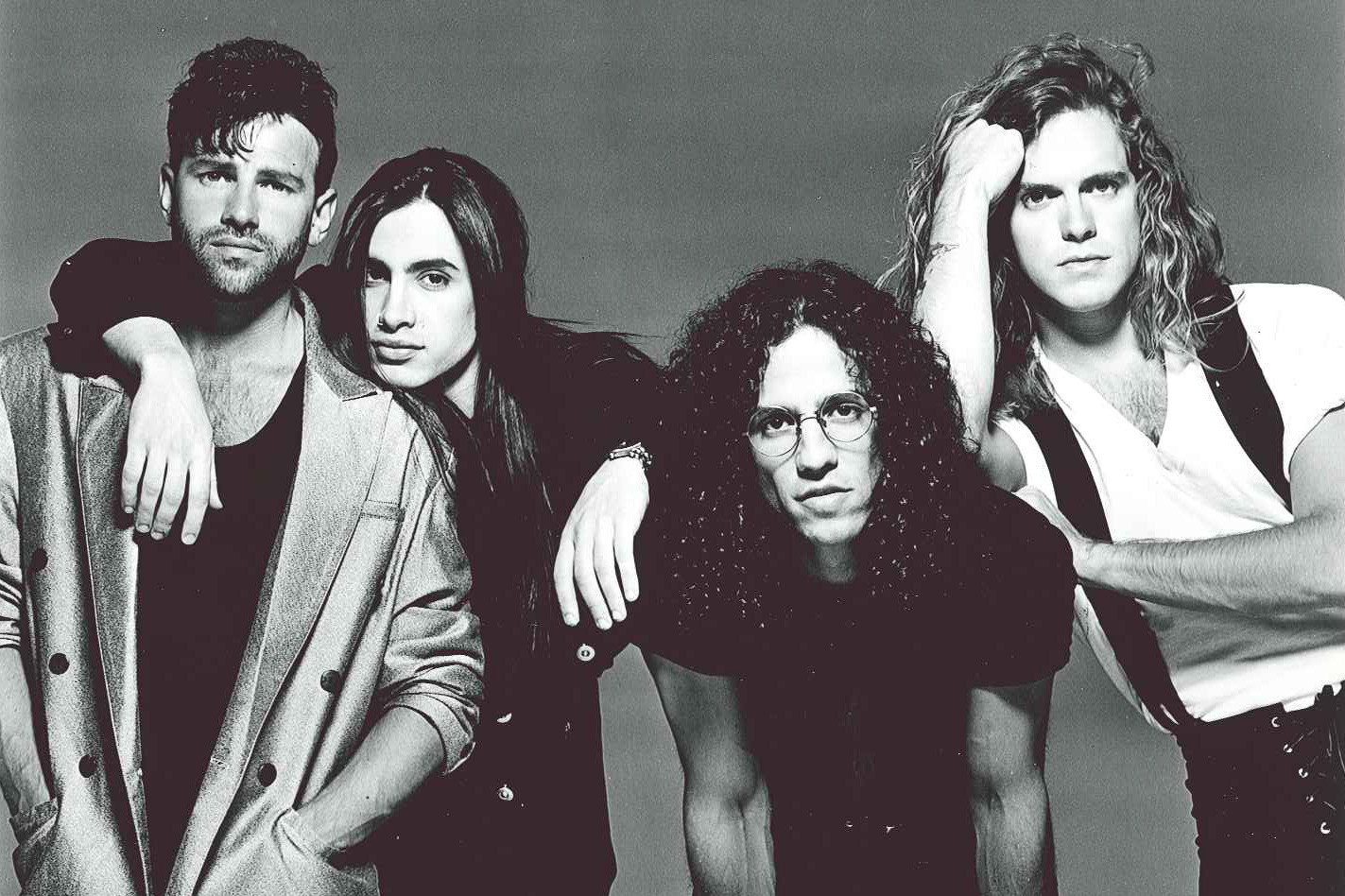 This week’s clue was posted early and solved even faster than usual. 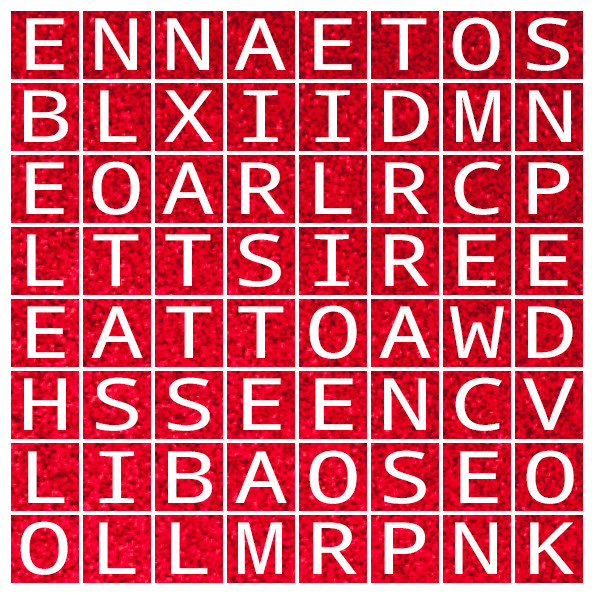 To solve this puzzle, start at the E in the upper left corner and move around the grid as a chess knight would, in Tetris-style L-shaped moves (two-over-one-down, one-over-two-up, and so forth). Each square is only used once. The correct path through all 64 squares will uncover a sequence of words that will reveal next week’s DLC.

CPMcFisticuffs solved the puzzle in about an hour!

So We can assume that we are getting another variety pack to kick off February from bands such as: Boston, Cinderella, Extreme, Poison, and Tesla!

We thought we would release some power ballads a week prior to Valentine’s Day, so you have a week to learn a song to serenade that special someone — and you don’t have to worry about what to get them. 🙂

Given that theme the song choices should be fairly obvious, but with @UbisoftStudioSF, y’never know!

Or perhaps Something About You?

Which was in Rock Band 3 with Pro Guitar/Bass

Watch out for Nuno’s solo!

So when are we getting a Poison Song Pack?

I remember singing this in Guitar Hero not knowing the song…

So there you have it, five ballads to woo that special someone with, and even if you aren’t into the selections… MORE BOSTON! Are you going to pick up all five? Or do you think we got a song choice wrong, let us know!

I’m totally excited for this pack, but what a missed opportunity to not include Sister Christian. Dat solo!

I’m picking up Love Song; Don’t Know What You’ve Got; and More Than Words if offered. Waiting to see on Poison and Boston.

Hope we get a lot more Tesla in the future 🙂

This sounds like a great pack of singles, rather seems to have a lot of potential. Ideal V Day Singles pack:

Bryan Adams; Have You Ever Really Loved A Woman

And for good measure;

Well, another undarrated band from that period still missing on RS is Firehouse. I mean, maybe they were hated back in the day by some, but musically their first two albums kick ass!!!. Specially tunes like All she Wrote, Overnight Sensation…

Is ‘Hole Hearted’ a ballad? That song kicks ass and the guitar work is far and above more entertaining than ‘More than Words’.

I want more Extreme. Nuno is a beast.

Hoooo ! I can’t believe it, it’s finally here, an Extreme song in Rocksmith ! \o/
I’m so happy even if it’s one of their ballads and not one of their “hard funk” songs like Get the funk out or Cupid’s dead, I’ll take whatever it is ! Thank you !

I’ll get the Boston and the Extreme song, although I think (or maybe I just hope?) it will not be more than words as it’s too much of an acoustic song, I hope it would be Hole Hearted. Plus ‘More than words’ is an acoustic ballad, not a POWER ballad. But maybe I’m being too literal there. Hole hearted is more of a Power Ballad… It will be interesting to see which it is.

I also think it will most likely be “Hole Hearted”, I really hope so. (and still pray for a 5 pack later on this year ! ^^)

Yes I’ve requested some Extreme Tracks, I hope we get a full pack too. Same with Motorhead, one song is not enough!

I am not sure what is more cringeworthy: this or the Bon Jovi pack.

Then again I enjoyed Three Days Grace with all its simplicity, so my opinions are surely irrelevant.

Great, now I have to buy a double-neck guitar to play the DLC. 🙂

would Cryin’ count as a power ballad? would love to have that in Rocksmith (Boston)

County and Jazz would be much appreciated by the more open minded guitarists. I love all good music and wish the makers of rocksmith would realize they are more than just rock. I’m very happy with the hair metal ballads pack though as there is not nearly enough on rocksmith currently. Would love some skid row.

Dairy Queen should have stuck with dairy. Staples should have stuck with staples. Burger King should only sell burgers. You apparently can’t rock out unless you’re playing rock music. Rocksmith is a cool and catchy name as are the others but why should everything be so literal? That would be stupid in most businesses as it would be stupid to only have rock music in a guitar teaching program. I love the game but please accept it is a guitar teaching tool and not just a rock guitar teaching tool. It has blues, it has classical, and it should have a larger variety of guitar based music. I want to be a well rounded guitar player not just a rock guitar player.

Another thing, have you ever been watching a great band close a show and looked at you’re friend and said man those guys rocked! Or said man these guys rock! It doesn’t have to be a rock band to say that. It means kick ass or kicked ass. So to me rocking can mean being good. Let’s try not to ruin the programs future by limiting it to only rock music.

All music is appreciated by Rocksmith, I am sure we will see a Country music pack eventually. We’ve gotten close.

And I hope to see a new wave pack, I think you now where this is going with what song I’ve been wanting for.

Hoping for a dope assed whitesnake pack if they are pushing cockrock but I will probably get most or all of these.

Oh please give us Amanda!!!!

It seems like every month they release a set of classic rock songs just so the people who don’t like today’s music stop complaining… I mean I don’t hate classic rock or anything, I just want something fresh

let’s face it 3 days grace is any indication of how good today’s music is then I rather play sixties to nineties music anyday. Today’s music sucks for the most part

I think it is a gross generalisation to say that people who like 50s, 60s, 70s 80s and 90s rock/music complain about the new music being released as DLC merely because its new music. I think that personally I like good music from all these periods and still enjoy music released today.

There was plenty of crap rock from the 50s onwards. Plenty of bands that just won’t be remembered because they were absolute garbage.

Someone who loved 80’s rock, doesn’t like all the music from the 80’s. There were bad bands in any decade. 50 years of hits, but also many more misses. It’s only this hits that people want to hear.

Just as with music today, there is an awful lot of formulaic, cookie cutter, populist pop junk out there, but also a lot of great music.

Why the “Nu-Metal” is the only modern music that we see as DLC confuses me though. This is why we see so many complaints bout modern bands on these forums I think. Not because its new, but because it all seems to be from the same genre of piss poor rubbish that’s being spoon fed to today’s angry young males.

So it’s going to be a pack or all singles?

I think Boston and Poison are it for me with this pack.

This forum didn’t mark it properly as a reply?

I wouldn’t think that’s likely given this is a themed pack. It would be awesome (and EXTREMEly hard) though.

If the song by Extreme is “Play with me” it’s an instant buy for me.

It won’t be, as it’s not a ballad. But I for one requested that song. It’s amazing.

I am going to pass. Nothing really screams must buy out of this pack. here’s holding out hope for next week.

I would only buy play with me, but that not happen, I guess I have to wait next week.
I only like 1 song from 2 bands on that list, but the song I want won’t happen

This Song Pack would be a must for me

Damn…I would prefer “Play With Me” than “More Than Words” (cuz no bass on this song…again). It’ll be funny to count how many songs haven’t got bass and how many haven’t for guitar…remember, this game was made for guitar AND bass.

Rocksmith was a guitar teaching game first. That’s how it started and the bass came later. Either way surely you can’t expect Ubisoft to only release songs that have both bass and guitar. As it is most songs in Rocksmith have bass.

Of course Boston is one of the bands because the Patriots are in the Super Bowl on Sunday.