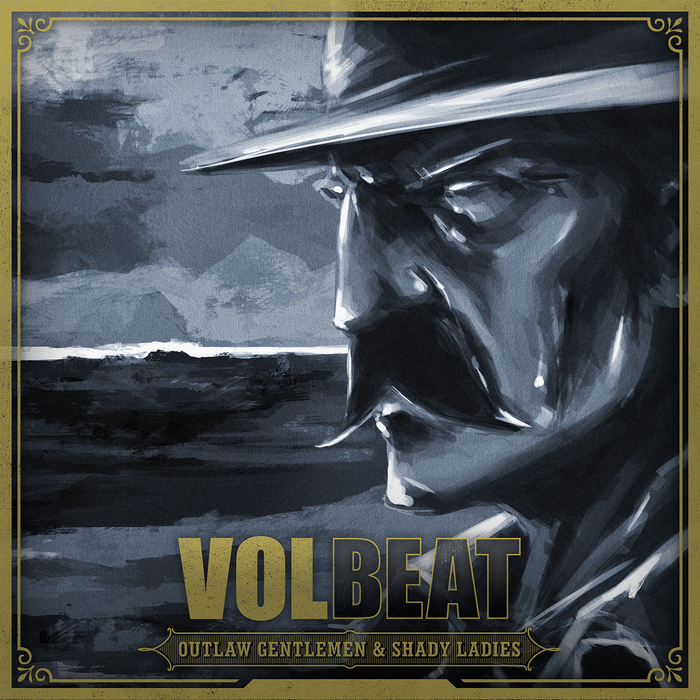 Let’s get ready to rumble! This week’s DLC (as speculated last week) is a five pack from Danish psychobilly crooners, @Volbeat!

The Volbeat song pack focuses primarily on the band’s material from 2008 and beyond so veteran fans may be slightly disappointed. Although it’s understandable that these are the songs that will sell people on the DLC.

From Guitar Gangsters & Cadillac Blood we get the somewhat Schuhplattler influenced anthem of Still Counting,  off 2010’s Beyond Hell/Above Heaven Ubisoft delivers three tracks! Heaven Nor Hell, Fallen, and their perhaps most famous single (these days) A Warrior’s Call. To top off the pack off their most recent album, Outlaw Gentlemen & Shady Ladies the sultry tale of Lola Montez!

These songs are all incredibly approachable for an intermediate guitarist and the only real barrier to learning them is most likely the syncopation of palm mutes (such chugging) and the fact that all five songs are in D Standard.

Volbeat is a heavily requested band, personally I’ve seen them requested on facebook/twitter almost every single day so this is a great addition to the Rocksmith 2014 Library! Thanks @UbisoftStudioSF

The only downside to this pack? I want Misfits in Rocksmith now even more!

Is this the type of DLC you’ve been waiting for? Or is the vocalist just a deal breaker when it comes to purchasing content? Let us know!

who plays the demos is that Elliot?

Here’s some English and math for you.
Wonderwaage + his post= giant jerk off!!

Can you at least try to reply to the person you are addressing?

never heard of this band before but after watching the DLC video ill probably only buy heaven nor hell.

How about some Gary Clark jr…. Self taught bad ass guitarist out of Austin TX.. Instead of these obscure bands that are less than average????

How about some comments from someone who has a flair for english. Instead of these obscure comments, that are less than average?

The band seems decent enough. However, from the samples, it looks like the bassist primarily rides root/5th along with rhythm guitar. Lead looks pretty fun, but I think I’ll hold off until there is a lack of songs I am interested in.

played through all the bass… meh. got 3 sightread FCs.

guitar sounds pretty fun though so I look forward to giving that a try. congrats to the fans who have been waiting for this pack.

i’ve heard TONS of people talk about this band but I never listened to them (mostly because I saw them on bills for radio-rock festivals and whatnot). after doing all the bass playthroughs it’s safe to say that I do not like this band. the vocals and lyrics ruin it for me. not that they are necessarily bad… just not something i would ever listen to on my own.

wow!!! I’ve never heard about this band, but I like it very much. I’ll buy this pack

Same here. Never heard of them before but after watching the videos, I’m a fan.

I’ll get the pack but i’m extremely disappointed with no Doc Holiday, the Hangman’s Body Count, or Sad Man’s Tongue 🙁 heaven Nor Hell and Fallen definitely weren’t ones I was excited to see..

Knowing that all the songs are in D standard makes me strongly consider this pack.

Great to see Europe being represented!

Now we need more songs from Europe the band!

They have more songs? You’re kidding!

No Sad Mans Tongue OR 16 Dollars?! I’m a little crushed! I said before I looked I’d be happy if just one if them made it but neither?! 🙁
And I’d argue they are both much more popular, played live and classic as those 2! Seen them live 3 times in 2 years and Warriors call wasn’t played once (unfortunately) but they played 16 dollars and sad mans tongue every time along with still counting! And of all newer songs I would’ve liked Dead but rising!
And I really don’t like Lola Montez!
Ideal 5-pack for me would if been:
1.Sad mans tongue
2.16 Dollars
3.Still Counting
4.Warriors Call
5.Dead But Rising
I mean I’m still buying it after writing this essay but one can moan! ESPECIALLY on this site! The comments sections are always full of bitches! Haha

Meh. Generic picks. 0 from my top 5, but at least Still Counting was near my top 5. So much lost potential. It’s never a good sign when I’m thinking about pack 2 the day a band’s first one is released.

My wife loves Lola Montez and Still Counting, so I suppose it’s not a total waste.

No hangmans bodycount? I’m surprised that did not make it in the pack, that song is some of their best guitar work. It’s a shame they did not put it in, its the only volbeat song I like. The singer’s voice drives me insane so I can’t really get into them.

I would have picked 0 of those. Will purchase tho. Nice pack.

A Warrior’s Call…. Never did get how a tribute song for a danish boxer ever got this popular. There’s some similarities between the main riff in that one and Hallelujah Goat too.
Well, I’ll learn to play it. I’ll be happy about the educational value I guess.

It doesn’t make sense to me. I had hoped to see at least one from the earlier albums, especially Sad Man’s Tongue…

Sad man’s tongue would have been awesome. Would have enjoyed playing Pool Of Booze too

Is that Zach Galifianakis? Nevertheless he looks just like one of my friends, and possess the same love for alcohol 😀
I LOL’ed