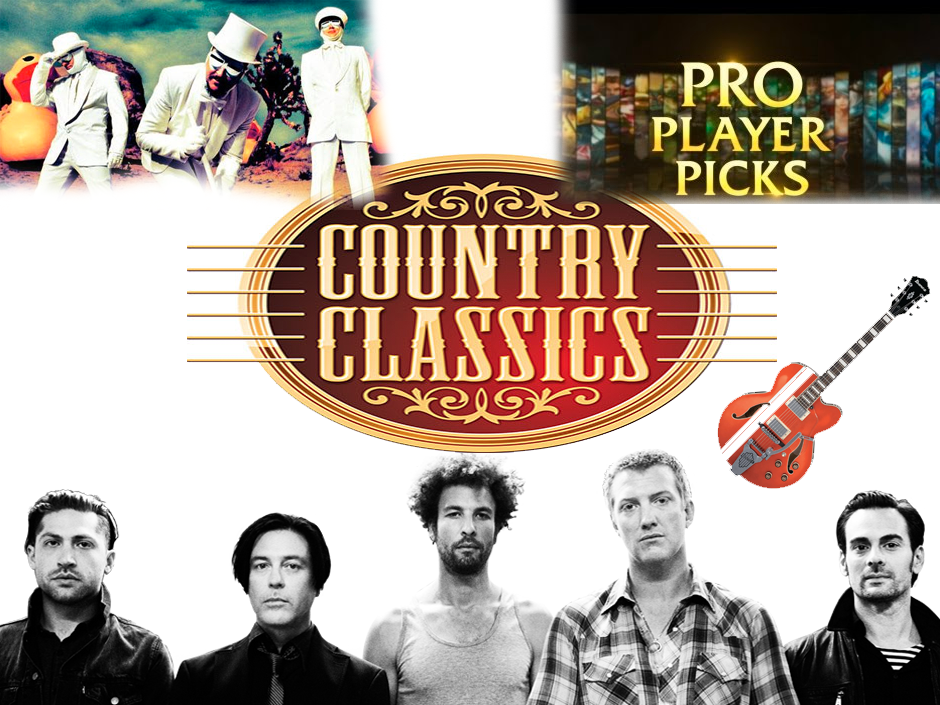 June’s DLC has ended and with it comes the DLC Round-Up! Let’s take a look at some of the Guitar and Bass highlights for June, shall we?

But first, here are the results from May’s DLC Poll: 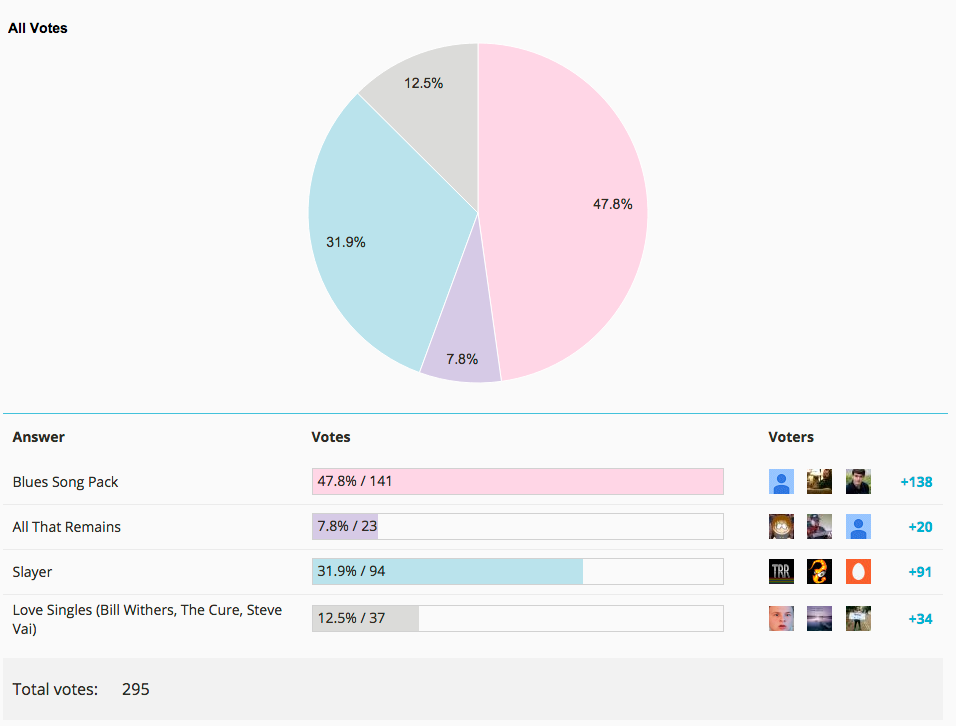 It’s really no surprise that The Blues absolutely dominated May, Slayer fans could not even compete against the power of the blues once five vintage blues tracks hit Rocksmith 2014.

June was quite the month, one of the few to feature two variety packs (not singles). In addition to this we saw the highly requested Queens of The Stone Age receive a 5 pack and the incredibly challenging Primus get their Rocksmith debut which included the theme from South Park. On the variety side we got a nice dose of Rockabilly (which included a song from Queen) the Players Picks pack which gave us four more tracks from the 70s-80’s to add to our library, and to cap off June the arrival of Classic Country music sorely lacking in the Rocksmith library.

June was a great month for Bassists, I mean come on we got PRIMUS, but besides that Queens of The Stone Age definitely delivered for bass on songs like I Appear Missing, and Little Sister. Rockabilly delivered in a big way with the upright thumpin’ of Brian Setzer’s Rock This Town and Queen’s Crazy Little Thing Called Love. Player Picks gave us a most excellent instrumental bass odyssey care of Edgar Winter Groups Frankenstein, Roger Miller’s King Of The Road gave us a fantastic walking bass line, and of course Primus was… Primus.

Bassists, you want this song, trust us.

Drums and Organ not included

Does your thumb hurt just watching this?

That’s not to say that Guitarists were left out in June. There’s a lot to go through from Larry LaLonde’s unorthodox leads in Primus to Josh Homme’s soulful yet approachable soloing in Make It Wit Chu, The highly underrated guitar wizardry of Brian Setzer in Rock This Town, The incredible guitar driven Modern Day Cowboy, and my personal favourite Hank Williams So Lonesome I Could Cry.

Did you know Primus also has a guitarist? 😉

plus it’s a re-record!

This was a great month if you hated tuning your guitar, almost every single week was full of E Standard goodness! Check it out

Which brings us to the question on everyone’s mind.

I had fun with the country pack, King of the Road. I’m in no way shape or form a country music fan either.

Didn’t even want to acknowledge primus

Why are you talking about Slayer in an article about June though?

Qotsa =stink
Players picks=who picked that crap
Rockabilly=really wtf??
Salyer= can’t even sell out a high school football stadium and canceled.. Erelvent… June has been the biggest disappointment since Bush got elected!

Did you mean Primus when you wrote Slayer?

Maybe he just wanted to shout his brilliant opinion about Slayer, yet another time.

Tough one. I’m torn between the Players’ Picks and the Rockabilly. I’ve never been much into QotSA or Primus, but that may be due to my age.

wow, this may have been the hardest round-up to rank… here’s where I’m at.

1) Primus -- the most challenging pack all around. crazy hard bass! the guitar work is unconventional and solos take a lot to wrap your head around (like Slayer solos but, slower and slightly more manageable).

4) Rockabilly Pack -- Aside from Rock This Town the pack is pretty easy (especially on bass). It’s a nice change of pace and great to have some more classic tunes but, doesn’t appeal to a player like me as much as the more challenging material.

5) Classic Country Pack -- Bass was fairly boring. I got sightread FC’s on every song… the guitar was just okay and like the Rockabilly pack, I appreciate the diversity but the songs don’t suit my personal style. Songs with a more bluegrass / chickin-pickin influence would interest me a lot more.

No packs were “bad”. Overall a really, really great month for DLC.

Queens of the Stone Age was a really really fun pack on both guitar and bass, and I really enjoy listening to their songs anyway, so QOTSA’s the winner for me! 🙂
Rockabilly has some very interesting, varied things, so it’s pretty nice aswell
Rocksmith made me throw a more advanced ear into the worl of Primus, and it’s starting to sound interesting, so thanks Rocksmith! Plus it’s very challenging, without a doubt
Player Picks was very meh imo, and Classic Country was fun, but not really my thing
Still, pretty diversified, fun month overall!

I liked the Rockabilly pack a bunch. I really like primus but was disappointed with the tracks. Qotsa are ok but not in my top 1000 favorite bands ( not a mathlete )…so rockabilly wins my vote.

Primus and rockabilly packs for me, the others just aren’t my thing.

Great month with Qotsa and Primus for me. As much as I love the bass, I have to say the Qotsa pack is what takes it for me. Sorry Les.