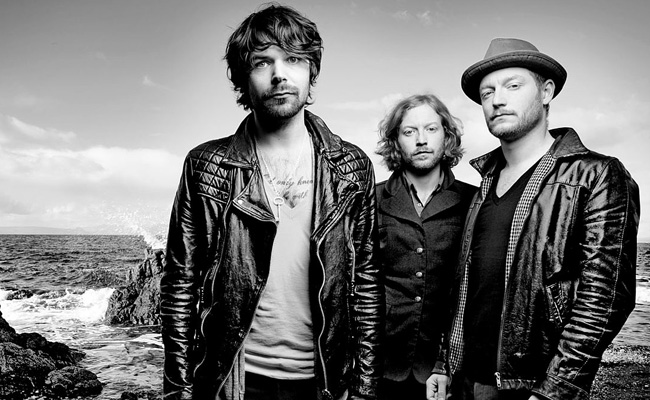 Greetings Rocksmith fans! While this week’s Rocksmith DLC may be unfamiliar to our North American readers, it comes to us from one of the biggest bands in the UK right now! We’re getting a FIVE pack from Scottish rockers Biffy Clyro! I can’t think of a better way to kick off my favourite month of the year than with a big pack from a big artist. Bonus points for being someone making their rhythm game debut! From their most recent album, 2013’s Opposites, we have Black Chandelier and Stingin’ Belle. Joining those two, are Bubbles, Mountains, and arguably their biggest hit, Many of Horror (a cover by the 2010 X-Factor winner was the Christmas Number One. That’s a really big deal in the UK.) from 2009’s Only Revolutions. The skill level is definitely a change of pace from last week’s blistering, solo-heavy Lamb of God pack. This week’s offerings offer up a more mid-level skill requirement. Perfect for the guitarist who wants to relax with something without falling asleep from lack of activity! Really though, the best way to convince yourself about this group is to give the songs a listen!

What do you think of this pack? Is this your first time hearing of Biffy Clyro, or are you psyched that your favourite band has finally shown up in a game? Let us know in the comments!

watch out for Stiffy Pyro

Impression after I got a cheat on the pack:

Lead: Some really unique chord shapes make the pack pretty fun. It feels like a downgrade of the earlier Billy Talent pack in terms of the new things it brings, but it is still plenty good to be considered. Stingin` Belle and especially Bubbles are the standouts, if you do not want the whole pack. Some really nice fingerwork too with HOPOs.

For me it was a good pack. I am not a fan of this band, nor has this pack convinced me otherwise, but Lead is still very entertaining. I wish for more Spoon or Jimmy Eat World if we are going down this pop-rock route, if for nothing else, just for nostalgia`s sake.

(also what`s up with people complaining about downtuning? i own a single guitar, am using 11/48 strings and even if it is not the perfect solution I go down the tunes from E standard to D Drop C fairly regularly. are those pegs infected or something?)

Thanks for the heads-up! Seems I am becoming a bass convert, much to the complains of the guitars.

Yep -- snagged it and I am liking it. If you’re on the fence, give it a try. It’s a little popish but at time it does have a really driving beat.

Just finished playing them all on both lead and rhythm. Very happy.

Not interested, certainly don’t care to add that many drop-tunings for songs I would be ho-hum about at best.

Not my slice of pie this week (a little emo-y), but if Ubi continues to jump around the genres and decades, it gives me hope for things that I like. Of course, I would be fairly impressed since I listen mostly to progressive rock (porcupine tree, cynic, etc.), varying subgenres of punkrock and other random bits.

I think Metric may be the only current pop band I listen to, and much of that interest may or may not be because Emily Haines if hot. 🙂

I would also love to see some Porcupine Tree and some Cynic. I have been loving Cynic’s latest album and would love to learn some of the songs on it.

Count me in for Porcupine Tree (and Opeth)!

Yeah Cynic’s latest is all kinds of awesome. Hoping P-Tree does another album (think they are all doing their own thing at the moment).

Tricky thing about Cynic, the last two albums Sean Malone primarily plays 5-string bass. Not sure if he actually incorporates the low B in every song, but it could possibly be an issue with RS.

I think most songs off of Focus he used 4-string fretless, but I would certainly not complain.

Maybe next week we’ll get that Chili Peppers pack

Next Tuesday is my birthday, that would be an awesome birthday present! I’ve been wanting that since the first Rocksmith game. or Primus, Living colour, Red fang, alice donut, Bob Marley, Rage against the machine, etc. etc…. dammit, i just hope it’s something I like! This isn’t for me.

Unless there is something in those charts that i don`t, some technique that i still suck majorly at and wanna learn, I do not see myself enjoying this. They are fine pop songs, but I would rather play Yacht Rock, cause it has that unique feel of the era, and I`m not even in love with Yacht Rock. I`m gonna wait for the Rocksmith stream (which I am really grateful it exists) to make a more informed decision.

I don’t know about you but I’m getting Black Chandelier as soon as the stream is over. The stream, for me, will be seeing what other qualities the other four songs possess.

Im from uk and a big fan of biffy and rocksmith. I dont expect to like every week’s dlc -- but I love this one 🙂 would also love more from puzzle 🙂

Hi has any had problems with the new Biffy Clyro Song Pack steam not showing in library yet.

This is actually unexpectedly awesome. Looking at the unique chords and the style of music. Different and good to listen to.

Another week, another pass on DLC.

Gad look at all those tats! Ugly f’ers! sound good though.

You must love Fall Out Boy’s drummer.

Sucks that it’s hard to find good rock music in the US now. It’s all pop crap now. We have to go to the UK to get the good stuff.

Can’t complain about the lineup, would have liked something from their earlier work but not overly surprised that there’s none.
Only thing I’d have liked to see was Mountains replaced by That Golden Rule, but I can live with it. Still a buy for me.

Really happy that Rocksmith has added Biffy DLC and included 3 of my favs. Would love some from Puzzle too, maybe later. Definitely downloading this when I get home.

this just tops the list of the DLC I NEED to get 😛 . however my main gripe about this pack is that there’s no songs from their 2007 album ‘Puzzle’

But Only Revolutions was such a step up. In fact, the only track I would want from before then is Questions And Answers from Vertigo of Bliss.

2 weeks with no E-Standard track in a row 🙁

Bubbles! Excellent. I wanted that too.

No, it’s not bad, but it’s not great either. And in your heart you kind of know that although it sounds all right, it’s actually just shite. Trainspotting quote

So happy Stingin’ Belle made the cut! It’s just a shame that RS ignored all but their 2 latest albums. Ugh.

I wish Rocksmith developers would just snap and say something insane to the annoying metalheads and requestors on the FB comments.

That wouldn’t really be productive. People are going to want the music that personally inspires them; that won’t go away, and it’s actually a sign that people care deeply about the game we’re offering. That’s good. I think it’s more than expectations need to be managed, and that’s done best with information about our process.

“Fuck the record… and fuck the people!”

Dan please… Give us some Death Finger Punch, Avalanche Sevenfeel and Mullet for my Sal Valentine

Somebody, please hug that man!

If he comes to London I’ll buy him beer.

Yes, Dan is very patience with those of us in the user community -- lol.