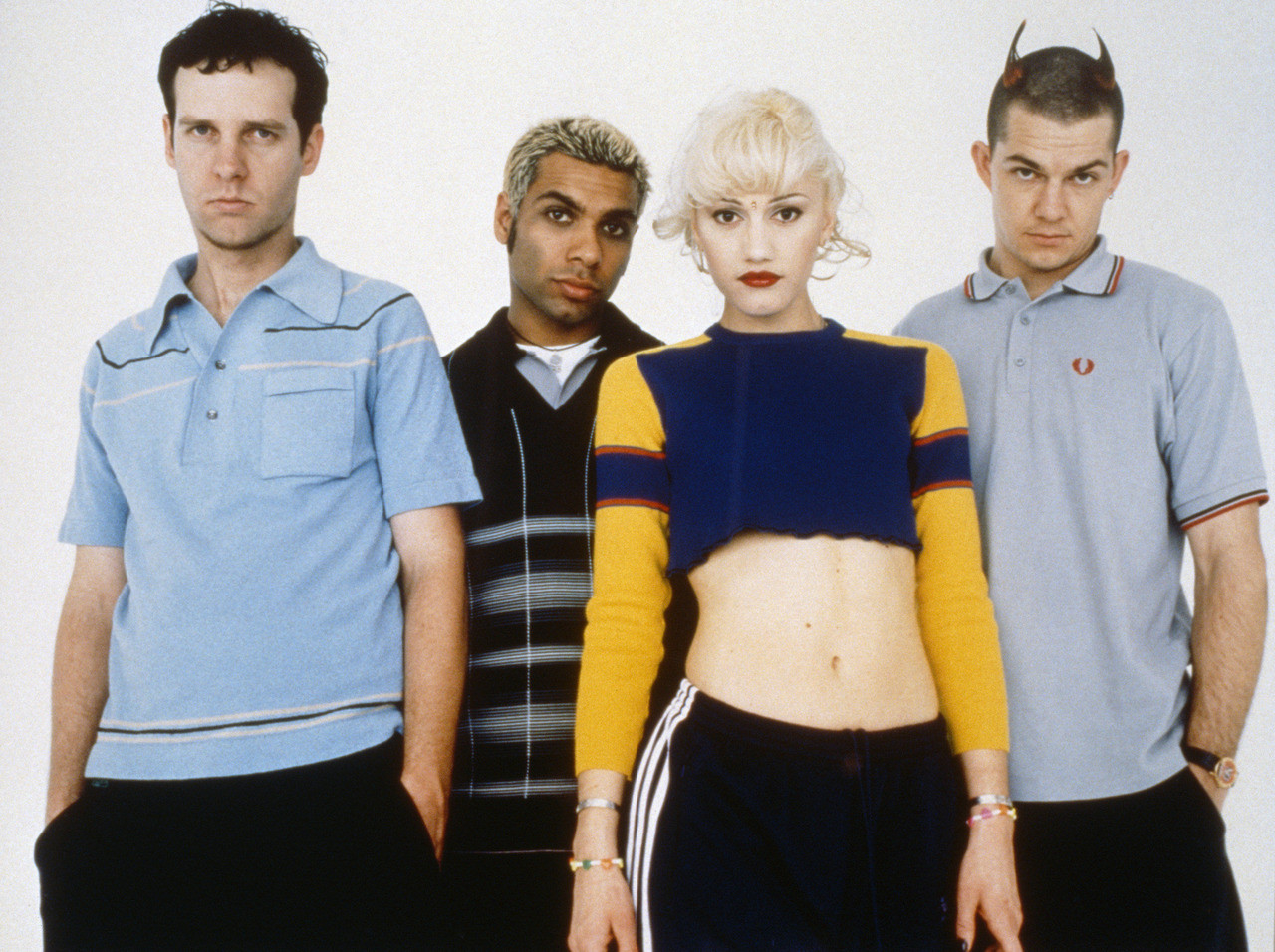 Time for bassists to get excited as yesterday’s hint confirmed that the Californian, Ska-punkish, quartet No Doubt will be making their Rocksmith debut next Tuesday!

Here’s how the clue solving went down:

Hidden in the post containing this image was this link

Which lead them to Rail Fence Cipher

@notthatbrad was able to crack the code (he meant “third single” by the way).

What about the Apple Core? Well, little known fact…

So we know one track is Don’t Speak, what about the other two?

I think the picks are fairly obvious but I really hope that one of them is Spiderwebs.

Yeah, yeah I know you are going to say it’s going to be Ex-Girlfriend, Excuse Me Mr. or Just A Girl, but I can dream right?

Are you excited for No Doubt? Are you somehow a bassist that doesn’t want to play songs by this band? Let us know!

No Doubt has so many more songs with better riffs than Don’t Speak & Ex-Girlfriend
and this should have been a 5 pack to support the above 2 songs.
as all of a sudden its looking like I may be getting only 1 song in this 3 pack

I'll take no doubt this week! I still want some sublime though!!!

Maybe the answer to the DLC blues would be to release 5 different songs from 5 different genres each week. The odds of at least one of the songs hitting the mark would vastly improve.

Until they release sales and download figures, almost all arguments are null and void.

Even as a hypothetical this is a ridiculous statement.

Replace “No Doubt” with “Billy Talent” if you makes you happier.

You mean the 5 pack that our readers have voted as the second best DLC of last month?

And Yacht Rock hammered everyone in that poll, which sorta proves my point. A little something to make everyone happy.

Replace “No Doubt” with “The Libertines”. 🙂

Everyone is never happy, the sooner you realize this the better 😈

I think they’ve done a pretty job alternating genres, but when they do these band packs, there’s usually just one song (if any) that I want (Amber, Short Skirt, Mountain, etc.).

I assure you friend, that is not Ubisoft’s fault. 😐

I guess if it was a Sublime 5 Pack

My question is, are they gonna do an Aerosmith pack and NOT include Ex-Girlfriend?

We already got an Aerosmith Pack.

The joke is, when the Aerosmith pack was announced the day before release, they made it seem like Train Kept a Rollin’ would be in the pack when it was not.

Totally rad choice this week. No Doubt is actually some interesting guitar. Im in on this one.

After this I hope next week is SLAYER! 😈

Its obviously not gonna be Different People, but that has the best bass of any No Doubt song for sure!

Next week’s DLC looks promising for a change.

Spiderwebs is a lot of fun on bass

I would love that! Also a Reel Big Fish pack. Looks like we got some requesting to do. No Doubt was one of the first groups of songs to request. So awesome we’re getting it.

I hope that “Hella Good” will be in the pack, it’s very easy and repetitive to play but who cares…

Looks good to me, but I do like 90% of what has been released thus far.
and I agree that Spiderwebs and Sunday morning would be the best ones they could choose.

Man DLC has been awful for so long now, and no end in sight. Nice they threw us a bone with a little variance in the surf stuff and some of the Yacht Rock stuff, but other than that it has been the most banal nonsense for months. Come on.

Honestly, and basically, you are spot on.

Here’s a really easy solution, divided into three steps since you clearly need the help:

1) Stop whining
2) Don’t buy it then (feel free to swap 1 and 2)
3) Go pick up some tabs or find them on the internet for songs you are interested in and stop wasting everyone’s time on this site. No one is forcing you to come here and comment, let alone buy any of the DLC.

The sad thing is that I want to spend money to support the game. Every week I have my wallet ready screaming “Just take my money already”.

I’d jump at the chance to fork out $50 for a 5 song pack from AC/DC, Van Halen, Led Zeppelin or Dire Straits.

I have said before, good luck to those people who like the content that’s being released each week. It’s also great to see a weekly release of content. It’s not making my experience playing the songs I purchased already any worse, so I shouldn’t complain. But every week it feels like I’m getting kicked in the teeth, even though others are happy about what they are getting. Its hard not to feel bad and want to voice that opinion.

I’d jump at the chance to fork out $50 for a 5 song pack from Dire Straits.

Just saying Dire Straits are the only realistic band on that list and it’s confirmed they are coming eventually (Winter?) 😀

Just to be clear, that wasn’t directed at you; it just nested it that way. It was mostly aimed at Nick…

I was supporting the sentiment though. It’s something about the process. You get your hopes up, then comes a band that you think either “Who?” or “WTF?”…

It’s hard not to look at the choice as dissapoining, when you should be happy for those who gained DLC that they love.

It’s the psychology of loss. If you have two children and you give a lollipop to child A, B feels like they lost a lollipop, not that their friend has gained one.

I’m a grown arsed man, not a kid. I should be able to harden the fuck up and move on but there are days I just want my damn lollipop…

Don’t Speak gets on my nerves, but if Spiderwebs is on there you can guarantee I’ll at least pick that up. The random other will depends on how I feel…
The bassist in me is gleefully excited.,

I like it and will buy but the metal enthusiasts will be upset. Love the diversity.

No Doubt a no buy for me.

This is one I can get excited about.

Surprised its not a 5 pack. In addition to “Don’t Speak” I think these are candidates:
Just a Girl, Spiderwebs, Simple Kind of Life, Hella Good, Underneath It All, It’s My Life, Settle Down.

no names that open for Muse I guess

thought that was a knock against Biffy Clyro

Radiohead got a five pack and so did Muse…

It’s the one hit wonders who don’t have more than three hits that don’t get the five pack.

Exactly. Glad we are all on the same wavelength. 😛

Then again I must be wrong in that theory because Biffy Clyro, Rise Against, A Day to Remember and Billy Talent all got 5 packs…

Well, I can assure you Billy Talent isn’t a “one hit wonder” in Canada lol

Reminds me of the Tooth Fairy episode of South Park:

Dr Foley: It’s not ridiculous, it’s very possible. I’ve seen it happen before!
Announcer: Where?
Dr Foley: In Montreal.
Announcer: [more laughing] And where, pray, is this “Montreal”?

They also opened/supported Weezer, The Who, The Rolling Stones, RHCPs, and Queens of the Stone Age

While I dig the bassist's work…. I loathe hearing anything from no doubt

I dont get it why is everyone saying the bass work is impressive. Just because he is turned up in the mix doesn’t mean he is great. I rather listen to Sting play bass than that clown

i’ll give you that one it does look like a lot of fun to play.

Wait until you see “Don’t Speak”

they should just release a huge 90s pack of all the mediocre bands in one shot so we can just get it out of the way. I’m thinking bush, no doubt, live, sponge, counting crows, hole, third eye blind and candlebox

Personally, I’d rather have The Black Crowes and/or Eve 6 😉

Collective soul, ‘aint half bad… Funny thing though, my mum got me into them. She also introduced me to Led Zeppelin and Simon and Garfunkel.

Oh yeah, CS has some of the most fun riffs to play. Gel, Dig, Shine, Heavy, etc…

No Doubt it will be Spiderwebs and Just A Girl.

I’m only a fan of No Doubt because of that bass. This will be a must buy for me!

So many 90s artists… why? and why these artists? Is it really that difficult to get a wider range of artists from across the decades? No Doubt is license happy, I am surprised it’s not a 5-pack. This isn’t a band I think of when I think I want to play guitar songs, but they sure get stuffed into these guitar games. Enjoy, anyway!

Nice, I really like No Doubt. Used to listen to them constantly many years ago.

1st hour buy for me….
as my girl will No Doubt …put out…
if I learn these songs for her……giddy up!!

Sweet! Insta-buy for me! I’m learning bass via this game, and this looks intense. Can’t wait! 😀

I think I’ll be skipping over this DLC, at least for now. Never listened to the band that much, and I’m not a bassist anyhow. Then again, I did say to myself “I’m not buying the Billy Clyro pack” and here I am now, already 100% on Stingin’ Belle. Funny how that works 😛

Haven’t listened to No Doubt in ages.

“Sorry I’m not home right now…leave a message and I’ll call you back.” How charmingly archaic those lines are now.

AND THE CORDED PHONES IN THE VIDEO. There are probably adults here who have never used one. 😯

Good predictions. I will add to them.

Just a Girl could be a choice. I think its in Drop D?

I expect Spiderwebs for sure.

Dark horse song candidate: Their cover of Its My Life. That prechorus bass is orgasmic.

I myself have requested all 4 of these songs before.

Wait was that Terry Hall?

As a bassist who grew up with 90’s UK ska and punk, I welcome this.

But that seriously was Terry Hall wasn’t it

Hello, I’m Terry, and I’m going to enjoy myself first.

How is that not an image macro.

Dat bass is what made me a fan of them in the first place. Tony is a beast.