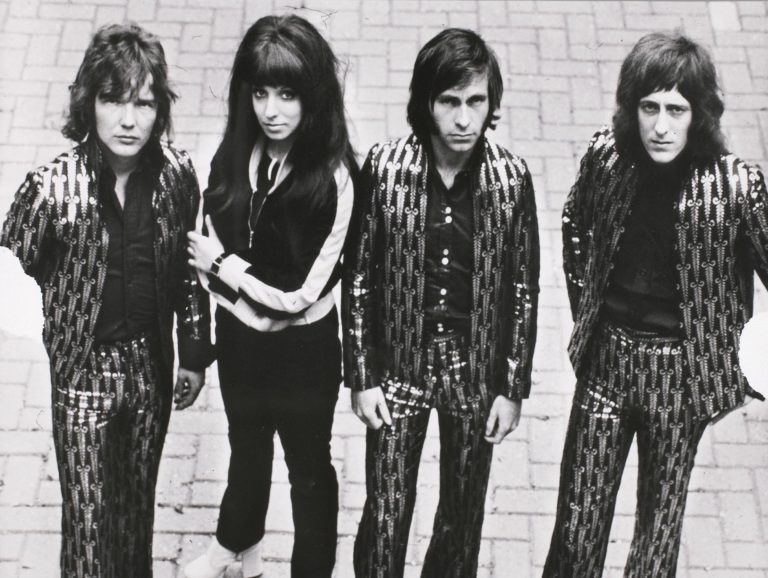 The decades packs continue with the groovy 60s pack coming to us today. Featuring three classic psychedelic rock tracks, including two debuting artists, you aren’t going to want to miss this one!

First up, we have the return of The Doors with their 1967 classic Love Me Two Times from the album Strange Days. Long time rhythm game fans may remember this one from Guitar Hero World Tour, as well as being launch DLC for Rock Band 3, but this is the first time we can play it on real guitar!

Next, we have a legendary band that’s appeared a little bit in rhythm games in their various incarnations, but have never made their way over to Rocksmith. Truly one of the all time greats of the San Francisco scene, from Jefferson Airplane‘s 1967 album Surrealistic Pillow we have White Rabbit!

Finally, we have somewhat of a more obscure act that’s never appeared in any game before. The first Dutch act since Focus all those months ago, Shocking Blue are the originators of both Nirvana’s debut single Love Buzz, and Bananarama’s infectious 80s hit Venus. Now, for the first time ever their music appears in a game as Venus, one of the biggest songs off of 1969’s At Home, comes to Rocksmith 2014!

Even better for those of us who hate detuning, all three tracks here are in E Standard (although the Doors song is tuned slightly sharp)!

So tell us, is this pack so good you want to Buy It Two Times, or has your interest in this fallen sloppy dead? Let us know in the comments!

As I’ve done before, I bought the pack on my 360 first. But now when I go to the Xbox1 to install, it’s asking to Purchase rather than Install, as I’ve done many times before. Anyone else having this issue?

You have to purchase as singles on Xbox one

I’m going to the Singles listing, as before, but it still says Purchase rather than Install. Glitched, or new policy?

Perhaps it’s my Xbox Preview build. I think I’ve read of some store issues with the Previews.

Was able to install the tracks by going directly to the Xbox1 store’s New Add-on tab.

Sweet! I was right about the Doors!
I’ll definitely be picking this up. Absolutely love that song.

Um no Again…Saving heaps of money lately on theses DLCs

Agreed. There was a good patch last year of quality, then lately, not so much

Really wanna get Love Me Two Times, as it is my favorite tune from The Doors, though the tuning is a bit of a turn off. The rest dont interest me too much.

Unfortunately Ubisoft can only pitch-shift songs to A440 if they get permission to do so. Still, it appears to have been just over ten months since a DLC release had a true tuning (the last time was, I believe, “People Are Strange” by The Doors, which came out for the game on 15th September 2015) so that was a pretty big run of A440-pitched releases.

I picked up Shocking Blue’s Venus. Pretty fun on bass 😀

I’m with noname rocker MOTT THE HOOPLE would be great! Also the stooges and how about some Crosby stills and Nash “wooden ships” great guitar stuff!!! Well done on this pack though rs

I’ve requested “wooden ships” by CSN. Great tune that has some sweet bass in there too.

what, What, WHAT !!?
this ain’t the Moody Blues

I like it… off my lawn ya little whipper snappers…!!!

Insta-buy! Old classics, and they look like songs I can actually master.

In for the pack. I was least excited for the Doors from the announcement, but after looking at the charts that’s the song I’m most excited about. I was excited for White Rabbit, but it looks pretty boring. Never thought we’d get Shocking Blue and I am stoked for that.

I would accept to see this ^^

I like all the songs. Couldn’t play them for jack but I like the thought of being able to one day.

Btw what is the guitar you are playing. It looks like my les-paul ripoff but nicer.

I know, wow. Ubisoft won’t go out of business now at least.

Pass this pack but I’d take All the Young Dudes in a heartbeat. Bowie wrote that you know, would be appropriate.

Pack looks pretty good, though its not at the top of my list. I would pick up Venus before anything else though.

I definitely want White Rabbit. Probably will skip the other 2.

Omg Jefferson airplane and the doors… Sweet… Can do without the 3rd song,but I guess u gotta get 1 song that’s a turd.

Y U NO ORGAN SOLO?

I’m assuming it’s in another chart..

What a trippy pack, man I miss those days when people used to write actual songs with guitars and stuff

Venus!!!!!!! Yes! Awesome pack despite the A446 tuning on the doors tune. I used to like the doors until I started playing bass and figured out that they didnt use a bass guitar in the mix when playing live. Boo!

I have to be honest, I’m a little burned out on Doors songs. I would have preferred another band that hasn’t been on RS2014 already. But hey, I’ll still buy the pack!