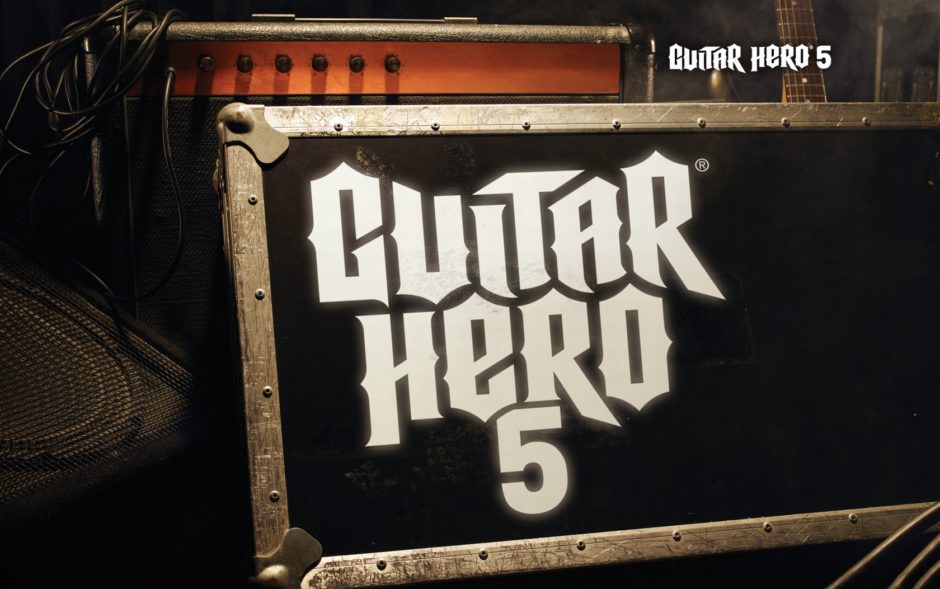 In September of 2009 the Guitar Hero series would get a major makeover. Not only did a new engine come in to take the place of the somewhat iffy World Tour one, a new logo was also brought in to reflect the series shift in focus away from purely hard rock and heavy metal.

It had only been a year between Guitar Hero World Tour and Guitar Hero 5, but there were four games released in between, and people who pre-ordered GH5 would get the upcoming Guitar Hero: Van Halen packed in for free.

Musically, Guitar Hero 5’s focus was more on indie rock and alternative. Modern music was a big focus of the setlist this time around, with the music being described as quite “fresh” due to the large portion of music from the past 5 years compared to the more classic rock oriented entries that made up previous sets.

Feature-wise, two very big ones were introduced here. The first one was the pick-up and play Party Play mode that would just cycle through all your music and you could leave it on in the background and just come in or out when you felt like it. The second was the ability to have ANY combination of four players you wanted. Three people want to drum? No problem! No one wants to play bass? That’s fine!

Critically, Guitar Hero 5 was very successful as many people felt that it was a massive improvement on the previous entries, although the setlist was more divisive with people saying that having such a varied focus meant that it was practically guaranteeing that no one would like everything.

Choosing only 10 songs proved to be incredibly difficult and we just couldn’t narrow it down, so here is our super-sized list of songs we’d like to see in Rocksmith 2014!

One of the most obvious “well duh!” picks in doing Setlist Sunday, it’s a little perplexing how Rocksmith has gone for almost 5 years without being graced with legendary Singer/Songwriter/Guitarist Peter Frampton’s distinct bluesy licks and signature use of the talkbox. At the very least, those talkbox tones would give more of an excuse to jam in session mode with some more neat tones.

Not quite your typical 90’s power chord pop-punk: Listen a little more closely and you’ll hear some surprisingly interesting arpeggios and atypical chord shapes. Not to mention, just have a listen to that bouncing, varied bassline.

Spacehog – In the Meantime

I’m not entirely sure what genre this song fits into; space-rock, reggae, pop-punk; whatever it is, if that varied, grooving bassline in the intro isn’t cause enough to request this song, the sheer goofy novelty of it might.

Rocksmith needs Nirvana DLC, yadda yadda yadda, they have three on-disc songs, yadda yadda yadda; this is really one of those “should have had a five-pack a while ago” artists. We’re not sure exactly what the holdup is with their lack of DLC, but Lithium would give beginning guitarists a chance to learn the kinds of unusual chord progressions common in Nirvana’s catalog without being frustratingly difficult.

Rocksmith seems to be lacking in classic Progressive Rock: King Crimson’s wild mix of Progressive Rock and Jazz horn instrumentation would satisfyingly fill that slight void and give both guitarists and bassists a nicely welcome challenge.

With a musical range that extends from his signature piano ballads to power pop, jazz, country, and bluesy hard rock like this rockin’ number from 1973, Elton John’s catalog has more than enough interesting guitar and bass parts for some inclusion in Rocksmith.

The Ubisoft SF team has been quite adamant about recently addressing the lack of country in Rocksmith, it’s only a matter of time until we finally get to experience the man in black himself; a trailblazer in the development of the genre and the godfather of almost all modern country.

A jazz fusion fan like myself wouldn’t leave this jazz-jam-rock masterpiece off the list; it’s a wonder why we have guitar virtuosos like Steve Vai, Eric Johnson, and Joe Satriani yet not this Yardbird alumnus who is right up with them in terms of sheer skill and notoriety. Here’s hoping for Beck’s Bolero and Cause We’ve Ended As Lovers in the near future as well.

Billy Squire – Lonely is the Night

Would it be embarrassing to admit that, for the longest time, I thought this was a Led Zeppelin song whenever it played over the radio? It would probably be the closest in style to Led Zeppelin Rocksmith could ever obtain in the near future; a bluesy, overdriven guitar combined with a varied bassline filled with John Paul Jones-style fills and flourishes.

Santana – No One To Depend On

Bluesy rock, Latin samba and salsa grooves, and slap bass make up this hit originally from the 1970s from one of the biggest pioneers and popularizers of Chicano Rock himself. Here’s hoping Rocksmith can use live tracks, as the live version is much more upbeat than the studio version, and includes that aforementioned slap bass.

Hey, this is actually one of my favourite Guitar Hero games, so I thought I’d share some of my picks…

This was actually my first personal exposure to Brand New and besides being incredibly difficult to sing in Guitar Hero, it also has a pretty satisfying guitar part that would be a great way to kick off the second Brand New pack we get, right?

My Morning Jacket – One Big Holiday

Outside of a few songs on Rocksmith we don’t have any songs that really “jam” you know? Well I have a solution for some crunchy tunes and they are called My Morning Jacket. Give this song a listen and tell me you wouldn’t want to give it a whirl.

We need some more instrumentals in Rocksmith and having a legendary phenom guitarist like Derek Trucks in the library definitely wouldn’t hurt.

@Dmonster4 @Rocksmithgame yes. But not until much later in the year. Working hard on an amazing winter line up!

Those are our picks, what songs from Guitar Hero 5 would you like to see come to Rocksmith some day? Let us know in the comments, and we’ll see you next Sunday!

Great mix of music, as Rocksmith had when it started out. 2016’s DLC seems to have moved far away from this kind of geographical and stylistic variety, IMO.

My ten tracks would be:

If the single on disk Arctic Monkeys track is the most played track in all of Rocksmith, it would seem a pretty good bet to put some more of them in… Just saying.

I remember someone asked about this on their twitter page before, they said it was something to do with The Arctic Monkeys being iffy on the digital format of their music which meant it was more difficult to finalize an agreement/contract.

I used to also think that Billy Squire song was Led Zeppelin.

Would be nice to see that one along with the following:

Santana -- No One to Depend On (Yeah, saw that coming didn’t you)

I have hopes Bodom will get a dlc pack some day, if not a single in a mix pack seems possible.

I also really liked this version and played the hell out of it.

My picks would be:

But if I had to pick ten:

But there are so many more great songs that I want in Rocksmith.

Just goes to show how behind ROCKSMITH is on any good dlc…. Mindblowing!smh.

…yet you hang out on the message board posting about it. You are boring.

Yep, you noted Plug in Baby as Not Available, but it was in Rocksmith 1 CD 🙂

Anyway, I didn’t realize I liked so many songs from GH5 ! Might as well get all of them 😀

For me, this was the peak of GH or RB.

BTW Muse -- Plug In Baby is available already, I think you missed that one perhaps.

Hmm seems I can play Wolf like Me already without Rocksmith. Never before have rhythm games been useful until today.

Thanks for the heads up. Don’t know why it didn’t make the table, we definitely counted it in the stat!