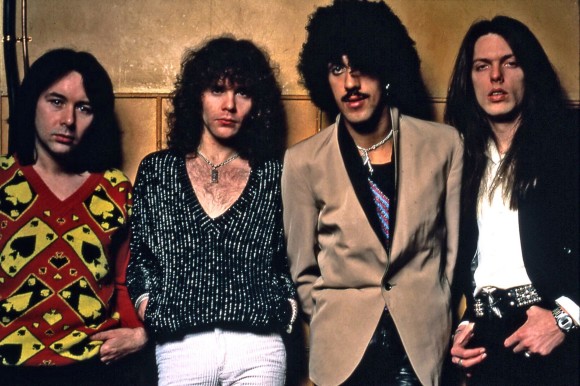 When I was younger I never really cared for the song “The Boys Are Back In Town”. Not that I was really in to music at all around that age, mind you. I feel in some ways I associated it with Alice Cooper’s “School’s Out”, don’t ask me why or how, and it just gave me a bad impression in my head. It would make a good song if they were combined though – school’s out for the Summer so naturally the boy’s would be back in town! Anyway, years later I accidentally gave the song another chance by going through various Thin Lizzy albums and stumbling across the song. Instantly I was reminded of my previous disdain for the song and wondered just what on earth was wrong with my younger self. Ever since I’ve had Rocksmith this one friend would always ask me when I was playing “Do they got any Thin Lizzy yet?”

Yes, Gary, they finally do so please shut the hell up and quit asking.

This pack includes The Boys Are Back In Town, Jailbreak and (a surprise to me) Dancin’ In The Moonlight. Boys and Jailbreak are both tuned to Eb Standard while Dancin’ stays on regular plain E Standard.

Tonight there’s gonna be a Jailbass

If you didn’t already know, Thin Lizzy’s singer Phil Lynott was also the band’s bassist, and boy could he play. Most people focus on the guitar work of Thin Lizzy, notably the twin guitar riffs and solos, but Phil was no slouch. When I played The Boys Are Back In Town, I was surprised by how varied it is and how much it differs from the progression of the guitars. It’s such a bouncy bass chart, you’ll probably find it hard to not tap your foot along to the beat with this one. Just don’t get too relaxed as it’s no walk in the park at some spots, like the chorus with it’s string skipping or the multitude of fast jumps up and down the neck.

Compared to Boys, Jailbreak is much simpler and has a bass chart that for the most part hides behind theguitar work. I think it really starts shine when the first chorus starts and I’d hope most of you would start to really get in to the bass flow at this point. Overall this one should be a relatively quick mastery. Watch out for the BREAKOUT!

Dancing In The Moonlight swaps the relatively powerful bass of the previous songs and is much more groovy instead. It’s not without difficulty, particularly at the end where you get more notes flying at you than the last minute of the song. I’d say all three of these songs are definitely must-haves for any Rocksmithin’ Bassists DLC library.

Whiskey and a Guitar

I was actually a little bit surprised at how well I played these songs on my first runthrough, which I think is a great thing for a pack like this, particularly on Boys and Jailbreak which are two very recognisable songs. The Boys Are Back In Town starts off with around a minute of simple-ish chords and palm mutes. Just after the chorus is the popular DANANANANAAAANA bit which could throw some of you off if you don’t have your fingers suitably flexible and ready. The real draw to this song is the twin guitar solo (which unfortunately fades out far too soon) so this might be the ideal time to buy a second cable and grab a friend with their guitar and get your Lizzy on.

Jailbreak still uses the twin guitar mentality but the Lead chart is a lot more “leady” than Rhythm as it’s the one that houses the bends and little licks while Rhythm sticks to simple power chords. The licks in Lead aren’t anything you should be worried about though. This should still sound fantastic for any coop players out there. Wouldn’t it be neat if we got a pack purely for awesome twin guitar songs?

Now funnily enough, I found the hardest song to play was the one I didn’t anticipate us getting. In terms of skill needed to play, and techniques used, Dancin’ In The Moonlight is definitely the one to get. The solo in this song is probably harder than any other part of this pack, and the rhythmic strumming is a pleasure to play. So do not overlook this song because you may not have heard of it or because it took the place of Whisky in the Jar or Cowboy Song – there’s a reason the developers put this one in!

Hi,I’m a big fan of the game, I really enjoyed the thin lizzy, foo fighters, radiohead, pearl Jam packs amongst others but the reason I’m writing is because you must do a full sonic youth pack!considering they special to so many people, teenage riot is perfection, they have a wide range of great songs like kool thing, Sunday, schizophrenia, incinerate, pattern recognition, star power etc.This is the pack that the people have been waiting for! Don’t deny them any longer!!!