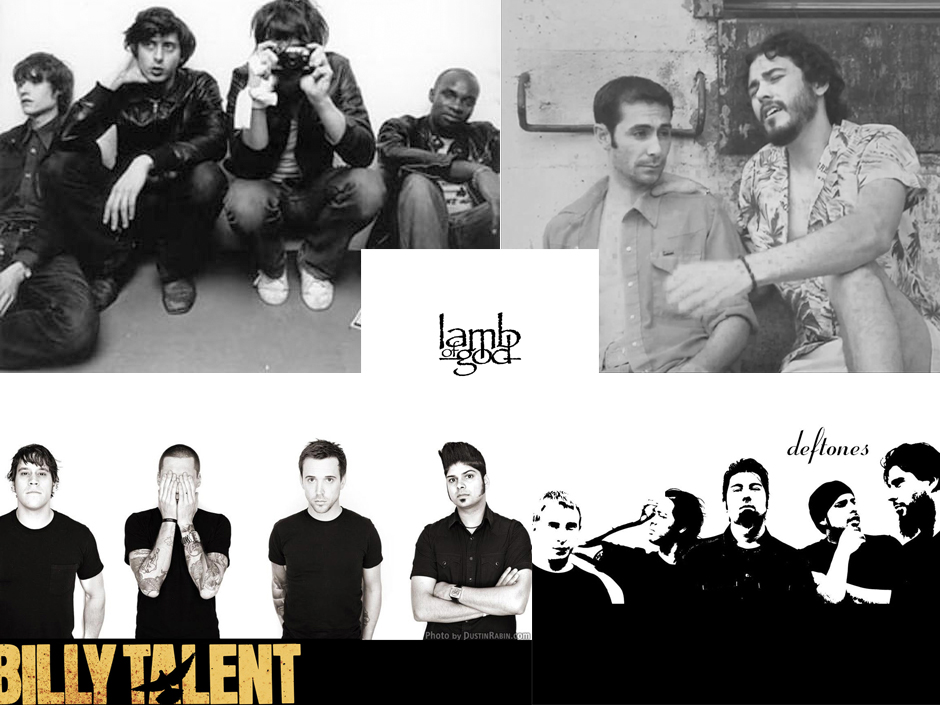 Hello, Rocksmith fans, and welcome to the July edition of the DLC Round-Up! Each month we will take a look back at all the DLC we have received and poll you, our wonderful readers as to what DLC stole your heart!

July probably held the most variety we’ve seen yet, within five weeks of DLC content. From the finger stretching chords of Billy Talent, to the indie-punkish rhythm and lead arrangements of The Libertines, the atmospheric drop tuned angst filled anthems of Deftones, the ultra smooth sounds of Yacht Rock, and finally the hellish finger mangling riffs of Lamb of God.

This month had bassists rejoicing over great tracks such as: Try Honesty (Billy Talent), What Katie Did (The Libertines), Hole In The Earth (Deftones), China Grove (The Doobie Brothers), and the ultra funky I Keep Forgettin’ (Michael McDonald). If you are fond of never touching the D string, you might also enjoy the Lamb of God Pack.

As for the big guitar song of July it has to go to Steve Lukather‘s incredible guitar solo from Toto’s Hold The Line.

If you prefer something a bit heavier than look no further than Ghost Walking by Lamb of God, your fingers are going to hate you…

If you are looking for more riff and less flash than you should definitely check out Billy Talent’s Devil in a Midnight Mass.

Quite the diverse set of tunings this month, you could practically hear people with floating bridges complaining at the announcement of each song!

A big month for Drop D fans! It’s always nice to get some Drop C songs, (the more there are the better reason to tune that low) but once again it looks like E Standard wins again with a commanding lead thanks to both Yacht Rock and The Libertines (and Billy Talent only having one guitarist).

Libertines all the way!! Very British though can't really compare to the others, love the Deftones also!

I only bought toto and michael mcdonald songs this month they were a real surprise. Specially the solo in hold the line. Fantastic stuff.

I passed on Deftones (don’t like them), Libertines (sounded bad, like a beginner guitar player), and Billy Talent (just not a fan), but I loved Toto and The doobie Brothers songs, and I got the Lamb of God pack too just for the challenge. Plus I like metal. Plenty to work through for me for the month. I’m still working on the Mastodon pack to be honest!

i haven’t buy any entire pack this month.
i voted for Billy Talent cause i had never heard of them before RS, but i really like their style, so i bought “fallen leaves” and “red flag” and it’s the kind of things i like to play..
Yacht rock is funny idea, nice add for the diversity, but i pass for now…
Deftones is one band i was waiting for, but i must say i’m a bit disappointed about song selection, (maybe i only love their first album actually), and “be quiet and drive” and “change” which i bought are not that fun to play IMO.
no interest for the Libetines despite some good songs, and Lamb of god is not my style of metal and it’s too challenging to be fun for me.

Rocksmith 2014 made me love Billy Talent, I just know few songs of them , like River Below and Fallen Leaves by them in the past. I became a fuckin fan of the two first albums which are priceless.

I love the Ian D’Sa guitar playing style, even if my little hands cried.

I’ll be picking up Lamb of God and The Libertines packs this weekend (I’ve been very, very broke lately and decided to save by skipping The Libertines… LoG will just have to wait for payday).

I’ll vote this weekend if the poll is still good… how long will it run Elliott? all month?

Yacht Rock -- Just too much fun. I’m not a fan of any of these artists but these are dynamite songs… instantly recognizable riffs and some surprising skill needed across the whole pack (except for maybe Hall & Oates).
Deftones -- an all-time fav band
Billy Talent -- fun songs and great techniques… I’ve just never been much of a fan. They’re really good live though.

I’ll vote this weekend if the poll is still good… how long will it run Elliott? all month?

It runs usually till the Friday of the last DLC week of the month but I am off to Osheaga so I posted it early :+1:

I finally got around to voting. Lamb of God got my vote… it’s just the closest to what I’d like to learn from Rocksmith. Heavier. Faster. I’m for it.

Yacht Rock holds strong at #2 and Deftones beats out Billy Talent only because of personal preference… the BT charts are def more engaging to play.

and yeah… Libertines were there too. This was my first time actually listening to them so, I’ve got to say that I think it’s a good rhythm section. Not great. Above average… but who the hell thought any of those guitar takes were worth keeping? I don’t hate the songs or even playing them. I just don’t see the appeal of Pete Doherty’s style.

Overall a great month! Thanks for the round up to put recent DLC into perspective. Without seeing it laid out this way, I wouldn’t realize how much content we really got in just ONE month.

I couldn’t put it any better; how about adding V-necks, huge lapels, and chest hair? Oh, and polyester. Those were the days.

It was nice being introduced to Billy Talent via the RS DLC pack this month, it inspired me to buy the Billy Talent II album and it’s a very good album overall.

However I voted for Deftones as this is a band I’ve really liked ever since the days when GH was alive (Hole in the Earth was GH3 DLC) and it was great to get some songs off White Pony as they have not appeared in music games before (more than likely due to masters issues).

My complete order would be:
Deftones
Billy Talent
Lamb of God
Yacht Rock
The Libertines

Such a polarizing month! I voted for the Libertines: I knew of them but had never really listened to their music before but really like it, and the three songs in the pack have immediately gone into high rotation on itunes and Rocksmith. As a beginner, I find the chords and patterns they use to be different from what I’m used to and although they have a reputation for being a sloppy band, I think trying to learn these songs has helped improve my playing.

Billy Talent’s pack was better than I expected, too, but that’s still a bit beyond where I am ability-wise.

Maybe if it had appeared alongside Africa and Rosanna… But in this months DLC, nothing beats Hold the Line

Thirded (is that a word?)

Billy Talent was one of the biggest surprises for me. I did not think I would like them at all, listened to the song released thought they were okay, and absolutely did not get why Surrender was not included (that song is superb). Then I watched some youtube vids and the Rocksmith stream, saw those pinky actions, something I have been struggling with, and since I enjoyed the punkish Sum41 from last month a great deal (in fact the only pack I bought that month), I bought the pack. I only have a guitar, no bass, so no Rhythm was a big consideration at the start, but the charts are so friggen fun, fast, I have been spending a heck of a lot of time in Drop D. My pinky finger action has increased A LOT. So big cheers for Billy Talent.

I have been a fan of Deftones since I have heard of the band (even tho some of their albums -khmmm self-titled khmmm- have been pretty crap), but the pack was not as fun as I hoped it would be. Still, I like the songs quite a bit, I do not regret buying the pack (one day I`ll be able to do that double pull-off in Be Quiet and Drive (Far Away) 😀

Hey Elliott, I really enjoy these DLC roundups. Creates a good picture of the month. Mind if I suggest some additions for these round ups?

Maybe a poll question like: How many songs did you purchase from this month’s DLC? With every possible number variation available as a choice.

Or like a checkbox thing where we check all songs we bought. Would be interesting to see the stats and averages over the span of years (assuming Rocksmith and you keep going for years and years of course).

I’d rather leave something that specific to forums/comments. That would be way too complex of a poll imo

July was such a good month although people think that Billy Talent and The Libertines aren’t worth it. I’m gonna go with the Yacht Rock singles because of the diversity.