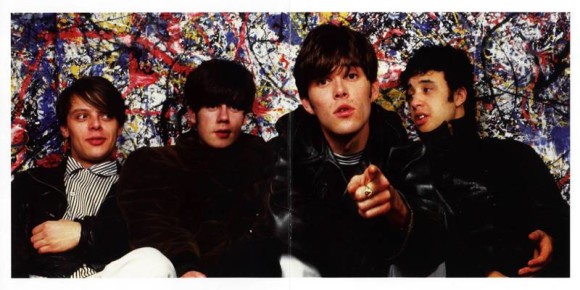 The clue has been posted and solved, let’s check it out shall we?

@DanAmrich kicked the day off with posting this image to the forums. 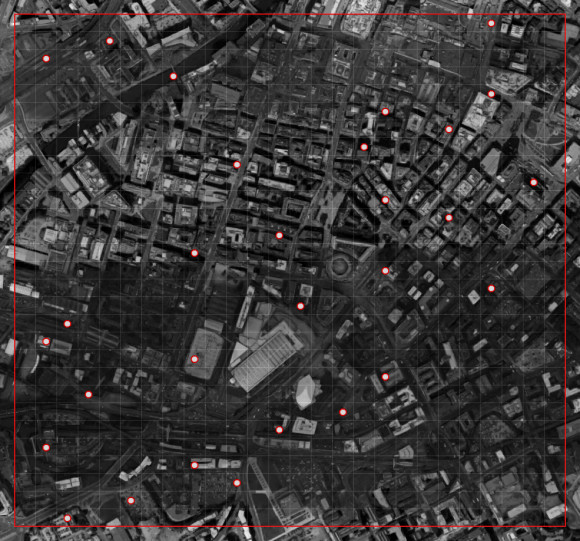 It didn’t take long for people to start speculating about what the image could represent. We knew it was just a .jpg so that meant that nothing would be embedded in it, so the puzzle was presented to us right from the start. Bearing in mind the hints we’d received already for this month, questions were immediately raised if this was an image of Manchester. Then, the penny dropped. 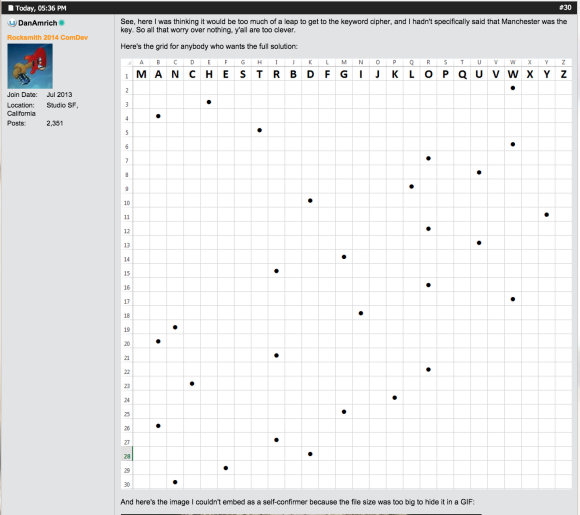 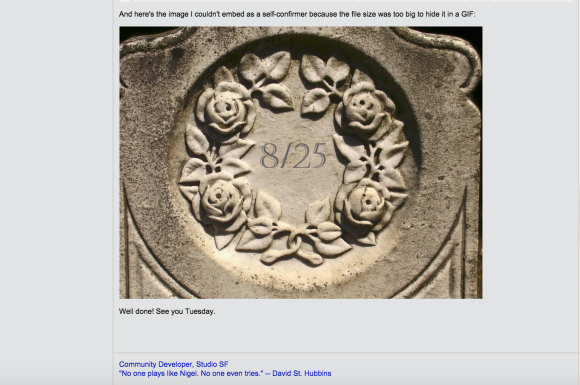 With that, all the hints given to us in August’s newsletter are covered, and I couldn’t be happier with who we got for the Manchester group! While a group like New Order or The Smiths would have definitely been awesome, The Stone Roses are such a great band but also one of those that I would have expected only to see a one off single of Love Spreads. The fact that we’re getting a whole pack, including two songs from their debut, is awesome news to me! The Britpop selection just keeps getting better and better. Now just give me my Suede and Pulp packs please, Ubisoft San Francisco!

As seems to be the case of late, SCEE’s website is still able to be mined to figure out the songs coming, so with that in mind, here’s what we we’ll be rocking out to on Tuesday! Of course, the big one is included with Love Spreads from 1994’s Second Coming, but rounding it out are two songs from 1989’s The Stone Roses, I Wanna Be Adored and She Bangs the Drums!

Tell us, do you think this is What the World is Waiting For or do you see this pack as mere Fools Gold? Let us know in the comments!

hello all, could someone tell me how I can buy songs of here please

There’s a link next to each song

Where is I am the Resurrection. I can’t believe this missed waterfall ….i hope these get released

Shame there’s no “Fool’s Gold” or “I Am The Resurrection”, but this will do for starters!

Can’t believe made of stone hasn’t made it on here. One of the best “walking out of work on a Friday afternoon” songs ever! (also with amazing guitar)

And they won’t be a nothing anymore

She Bangs the Drums is my new favorite Rocksmith song.

What could this mean for Rocksmith?
http://www.triplem.com.au/modernrock/music/news/2015/8/rumour-original-line-up-of-guns-n-roses-to-reform-and-possibly-play-soundwave-festival/

Great pack, love spread a righteous groove on me. Thank you Rocksmith.

Not really my thing, but I’m glad people like it. I’m hoping September brings a month of current rock

The group and their songs are not normally my thing,but after watching the demo videos, I think that I am going to buy because there is some nice guitar to learn.

This could have easily been a good five pack. Three will do for now

These charts look really, really fun. I can’t wait to play them.

Is Love Spreads the first song to use Open D on Rocksmith?

Oh hell yeah stone roses! Those love spreads riffs are so filthy ur gona have to wash ur hands after playing! Also that she bangs the drums bassline is absolutely infectious!

Loved this band when I was younger. Ruined their legacy in the uk, by reforming for shows (went to see them). Can’t believe no Resurrection. Woulda loved One Love, or even Elephant Stone from Turns Into Stone. Hopefully someday we get Love is the Law, to learn that solo.

I’m curious about how they’re going to approach Love Spreads -- open tuning with a slide (for the intro) or just drop D and fudge it?

Yes I’m pretty excited for this one this months songs have been great,

John Squire one of the best guitarist nobody in USA has heard of, Mani considered a legend on the Bass, 3 great tunes, don’t know why everybody doesn’t love this.

The Stone Roses’ first album is regarded by many as one of the best albums of the 90s (even though it released in 1989 haha). There are several good bands from Manchester, but these guys are certainly near the top, imo.

I’m quite excited for this pack, as their two albums are among my all-time favorites (though the first album is better, the second has a lot to offer…I mean, dat guitar).

Yay, another good week. Thanks, Ubi! Keep it up! 🙂

If I had a rock garden, i’d grow arctic monkeys in it.

Sounds interesting and since it’s new to me, even better. I’m in. ?

Probably the most disappointing dlc this year. Manchester has produced some fantastic band -- sadly, the stone roses aren’t one of them. Could’ve had Buzzcocks, Magazine, Joy Division, New Order, A Certain Ratio, The Fall, Chameleons, The Smiths, Inspiral Carpets, James, Sonic Boom Six. Oh well, someone probably likes them.

When I look at that list of bands, you have rightly separated The Stone Roses away from the fantastic bands that come from Manchester.

You are right to class them as better than fantastic. Your are right. They are legendary 😉

Only 2 from 1st album? No waterfall or resurrection? No matter I know em already hehe

I think I love this band!

I only know “love spreads” by this band but I like it so much that i’ll buy the pack regardless of the other songs and trust that they won’t suck.

I only knew love spreads and loved that song until the stone roses were rumored to fit the Manchester hint. Honestly I was a little disappointed because love spreads is so different from their other songs. Give them a listen, I’m glad its only a 3 pack because I don’t need a lot of this band but Love Spreads is awesome and the other 2 are quite good as well.. I hate just buying 1 single from a pack!

I agree buying just 1 song from a pack blows. I pretty much have been “the pack or nothing” for some time now. If any of the other songs have as cool a bass line as love spreads I’ll be happy. You made me afraid to listen to them before I buy the pack. I have quite a few friends who don’t even like love spreads, lol.

Wasn’t really all that excited at first. Then I listened to Love Spreads…. So looking forward to this pack!!!!!

I’ve never heard of these guys prior to this post. And personally, it’s not for me so I’ll pass. For those that like this band, have a fun week. I’m still waiting for more metal lol. 🙂

Oooh, let me guess. Are you one of these guys who judges everyone even though they don’t know that person?

Can honestly say I never heard any of these songs… Love spreads sounds like a good guitar song.. Other than that no interest

Love this band. Really surprised they got a pack. Yay!

Aww man, no “I am the Ressurection”. Welp, at least it’s Stone Roses (yay!)

I like the band, I like the songs, but I have no interest in learning them. Not for me this week. This has been a bad month for my taste. Hopefully next month will be better for me.

Very happy to see them, but was hoping for a 5 pack with I am the Resurrection. Oh well, these songs are still awesome.

Love The Stone Roses. Fools Gold would be awesome.

Couldn’t be happier with this news. Hurry up and take my Becks!

They never said anything about maybe Pantera this week. Maybe you should read more carefully.

You need to pay attention.

That was a legacy DLC review 🙂 We hope that more Pantera comes eventually though!

Wow how do you go from saying maybe Pantera to this *which is not my kind of thing*?

Fixed it for you. You’re welcome. 😉

She Bangs the Drums from Guitar Hero 3 <3

One day, we will be able to play Rocksmith Hero with all the songs, previously on Guitar Hero, now on Rocksmith.

Good to see more brit. I dislike this band. A Blur 5-pack would be so good.

We passed that point a long time ago! With these three songs, Rocksmith will have 555 DLC songs available (558 if you count the three Christmas songs)!

Only counting songs released since the launch of the 2014 edition, we would have 420 songs.

Ah. Yeah, that makes a lot of sense. Also, wow they’ve put out a lot of DLC.

I must be getting really old because I have never even heard of Stone Roses.

They’re from the late 80s, but I think they were much more popular in the UK.

That’s funny, I thought the reason that I knew of the stone roses was because I am old, lol.