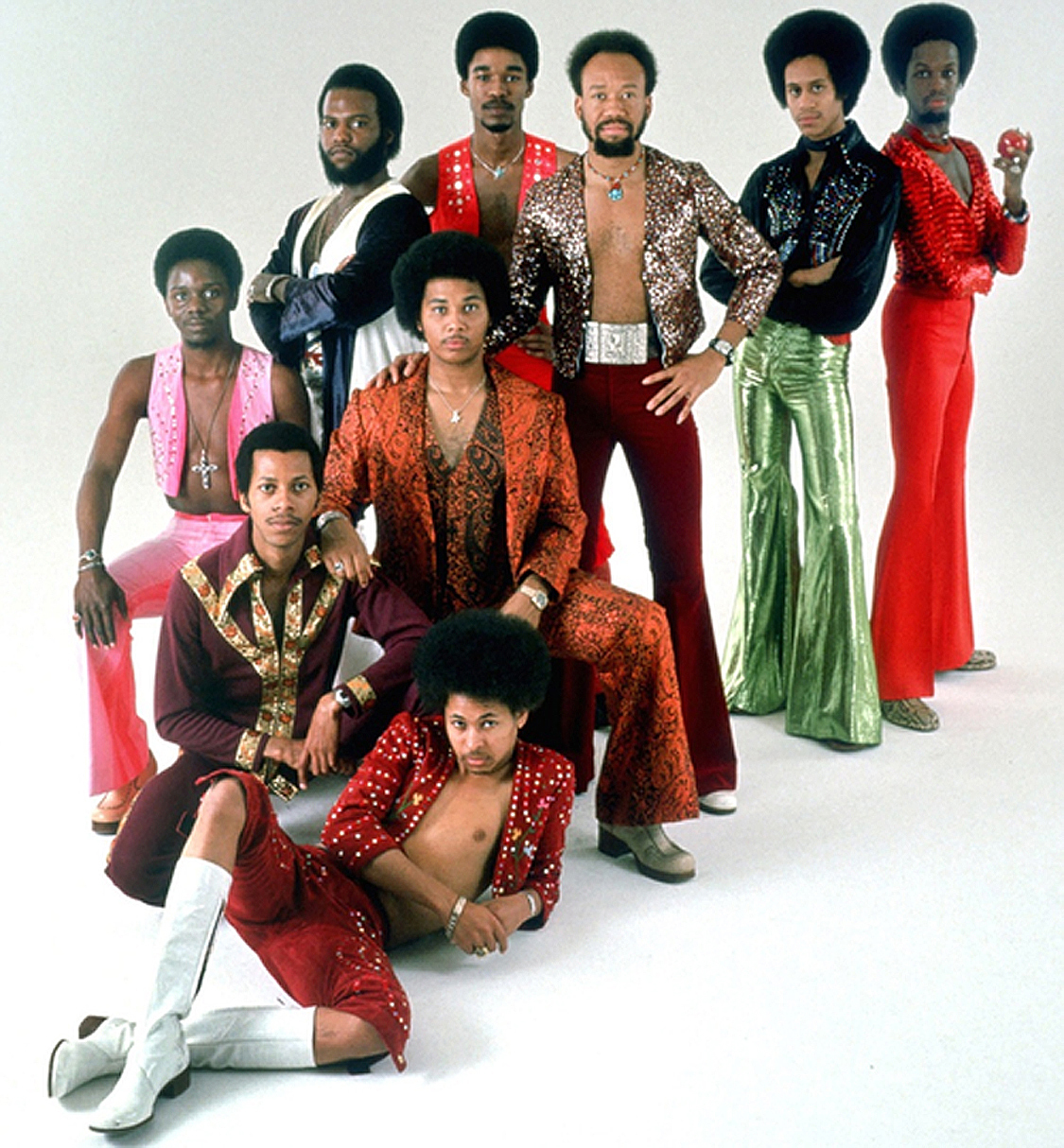 Dan’s (or, rather, Chris’) clue has been solved, and it looks like we’ll be getting a rather appropriate start to the month of September; legendary funk/soul/disco/jazz/R&B group Earth, Wind & Fire is finally coming to Rocksmith!

Why, that’s the founder of CNN, Ted Turner! 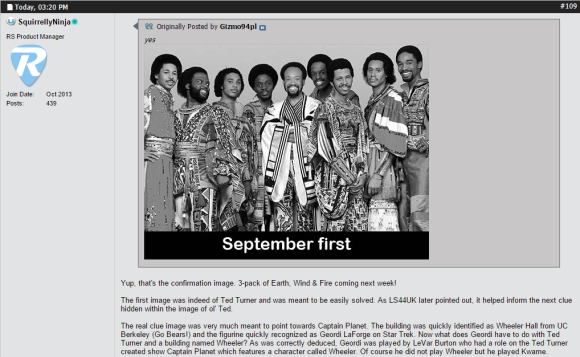 This is absolutely fantastic news (for me at least, since I’ve been requesting EWF songs for who knows how long), as I’ve seen quite a number of comments on the forums and on Facebook asking for more funk music on the game. Surprisingly, EWF have had only one music/rhythm game appearance before; Shining Star as Rock Band 2 DLC on March 17th, 2009.

Since it’s a three-pack, what songs could we be looking forward to? Obviously, this song is a given;

Just listen to that bassline!

How about dat funky guitar line?

Perhaps if Ubisoft SF were going for more of their earlier funk as opposed to their disco material. Also because it was in Rock Band 2.

Unlikely, considering it’s a three-pack and this song is a little light on guitar, but it’s their biggest hit and highest-charting single. 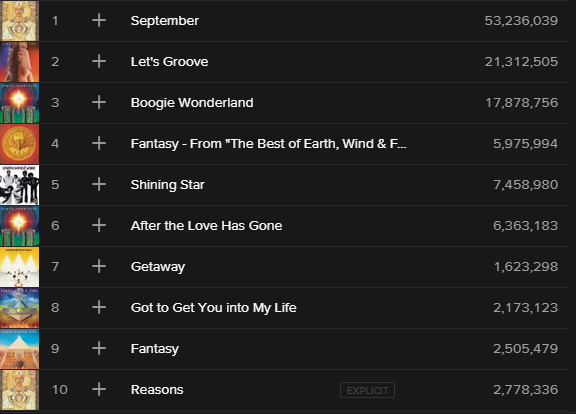 Here are their top 10 most popular songs on Spotify, which one do you think are most likely to make it into the pack? (Although Got to Get You into My Life is a Beatles song, so it’s not very likely.)

So what do you think, Rocksmith fans? Are you as excited as I am for the arrival of Earth, Wind & Fire? Are you disappointed that it’s only a three-pack? Leave a comment below, and we’ll see you on Tuesday!

I actually feel like I’m in a very small group of people who want more metal DLC, but still think Earth, Wind, and Fire is a great addition to the Rocksmith family. While they aren’t my favorite band in the genre, I still feel its a great change in pace for Rocksmith. 🙂

I’m going to assume Dan really didn’t do this puzzle because he is too embarrassed about releasing this garbage. He should be use to it by now. Ubi needs to hire some new, young talent.

He’s at PAX, that why he couldn’t do the puzzle.

As a guitarist who does like funk or disco, this isn’t my thing either, but it’s definitely not garbage. Its music. Dont act like a spoiled kid please, they gotta appeal to the masses and its obvious that many people want this so i dont think your crying is going to have any impact. Better luck next week.

The masses express interest in more current, popular bands than this. But the licensing excuse gets tossed on the table while other music games are able to acquire these artist. The artist over the past few months are ones that they can license at minimal cost, not artist that are speaking to the masses.

Yea, the masses really screamed for this group. I mean, they are on the top 40 right? The masses you speak of are the group at Ubi I’m guessing. They love the stuff that they can license for pennies..

Probably not the part of the masses that whines about the upcoming pack. Probably just the folks who can master the incredibly hard task of using the request app, and have discretionary income to purchase DLC when it comes out.

I’m convinced that the request app just pushes requests to the trash can. I have money, I just don’t waste it on junk dlc

I only brought up the top 40 because someone was saying the masses request this shit, which isn’t the case. Go get bent Jim.

EWF is a stellar choice…beautiful music from a great time. Is this disco? I suppose, but I think I have warmed to disco since the 80’s have been over for almost 30 years now. I recall with fondness hearing the bee gees on the radio now. I am honestly thinking it wouldn’t be tough to create a 3 pack with broad appeal. I will probably get this since most of the latest stuff has been mostly passable. This game has exceeded my expectations on dlc frequently but I think if I ruled the world, they would release even more songs I like…and some people would be very disappointed.

Woot! I’m blow away. This is as close to a funk pack as I’m likely to get and I’ll take it gladly. well done rocksmith, ty.

uh, there was a funk pack, right?

Lol, yes there was but it was almost 3 years ago. I should have said “another” funk pack. Preferably with something other than parliament or James Brown. I’m talking B.T. Express, Brick, Slave, brothers Johnson, War type stuff.

Earth Wind and Fire are not a disco band. So don’t be scared off. Like The Rolling Stones, Van Halen, Kiss, and Rod Stewart, EWF does have disco tracks in their catalog, but like those other bands, they should not be considered disco. In contrast you have artist like Donna Summer, the Bee Gees, and the Village People where the majority of their biggest hits are disco tracks. They serve as a better fit in the category of disco.

EWF kind of straddles the line between Parliament/Funkadelic, the Commodores, Cameo and more traditional R&B like Curtis Mayfield, Lionel Ritchie(as a solo artist) and Isaac Hayes.

Question for those who lived through it. I’ve heard that in the 1960s there was some music form in England called Skiffle and that over time it has become just as despised as Disco. Is that true? Not sure what skiffle is.

Skiffle is sort of like British Rockabilly with a washboard instead of drums. The Beatles started out as a skiffle group called The Quarrymen before changing their name to the Beatles in 1960.

What Daniel said. Often very DIY, home-made instruments, etc. like the tea-chest bass. Lonnie Donegan is a good intro if you’ve never heard any. The Quarrymen (Lennon & McCartney’s first band) started out as a skiffle group.

Funny thing. When I went on to Youtube and typed in skiffle, that Jimmy Page video was the first one to pop up. Momma don’t want no skiffle in here. Kind of funny seeing Jimmy do a little dance as he and the guys played this.

Honestly, this sounds similar to some old-time country band. Hearing it caused me to wonder if I’d see someone come out playing the jug or a washboard. In all, it didn’t sound bad to me. I mean I wouldn’t pay for it. Besides that, I’m not sure why it didn’t get much love.

Great! I requested them and am buying!

Tf be this? We want more thrash Metal!

Metal is great but some good ‘ol 70’s Disco sure is awesome.

Disco sucks, it went away for a reason. This music can be found in your local discount bin at goodwill.

And why does disco suck?

right next to all those 80s metal bands that became pop sensations with power ballads.

i want metal more than anything, but EW&F is badass!!!!!!! cannot wait to play the pack

I wonder if we’re now a step closer to

I’m not sure what the guitar parts may be, but……
This should be
B A D A S S !
Truly, a little something for everybody.

If anyone else wants to check the Sony website it looks like “Shining Star” is one of the songs. I tried looking for some of the others but they either weren’t there (“Boogie Wonderland”,”Let’s Groove”). the titles were too generic (“Fantasy”) or their title was entirely contained within the title of a song already in Rocksmith (“September” and “Make it Stop “Septembers Children””)

September shows up if you search “September earth”

Sing a song rounds out the pack!

So: Sing A Song
September
Shining Star
And all 3 start with an S!

SO. GREAT! It releases on September so I’m guessing: September (d’oh!), In The Stone and Shining Star. \o/

Hmmm, I like this band, but I would prefer something a little more guitar oriented. Bass had plenty of love in July and early August, I think it would be fair to get a few more guitar based dlc’s before getting another bass focused dlc.

Guitar has had 3 years of guitar centric DLC.

Well, it was originally promoted as a game to learn guitar, not bass.

This is so awesome! Instabuy!

(The performer should stick to his guitar & let someone else sing)

I don’t even get hyped for dlc announcements anymore, thank god rock band 4 is going to release soon

Sorry to hear that, do you frequent our friend’s website at http://rockbandaide.com

I’m guessing you are in your 50’s Jim

And you’d be way off with that guess because I’m not even quite half way to 50 yet. And you’re really foolish to even guess that because not only do plenty of people like music from all eras, but also because I never once said I prefer this to modern music, because that’s not even true either. I’m one of the aforementioned people that likes music from all eras, but my favorite decade would actually probably be the 00s.

perhaps their the ones spending the $$$$
cheap azz……………duh

Noooope, disco can cram its platformed shoes and giant afro’s up their collective jive turky arses

EWF are primarily a Funk/Soul band, only a small handful of their discography is classified as disco.

(Detroit Rockers Engaged in the Abolition of Disco)

Pass… Disco is not where I plan to expand and of my playing skills.

WOOOOOOOOOOOOOOOOOOOOOW!!!!!!!! Did not see this one coming. Talk about dropping a bomb. It really seemed to me like Ubisoft was avoiding this lane. Good call on EWF!!! Along with PFunk, Cameo, Zapp, the Ohio Players, Lakeside, LTD, Confunksion, Kool and the Gang and some others I’m forgetting, EWF were in heavy rotation on my parents record player. I’m pleasantly surprised to see them getting some love like this. (really deserve a 5 pack but I won’t get greedy)

Well because of the month we’re in, I’m sure September will be one of the songs. I think Shining Star would be an essential as well. (Along with the Commadores’ Zoom-that is the fattest bass I’ve ever heard)

Lastly, I know it won’t make it, but just in honor of the band and the fact no one has mentioned the song yet:

Great, looks like it’s going to be anoter 70’s and under month.

Another? I’m pretty sure every single month to date has been at least roughly half post 70s.

seriously? The dlc has been flooded with old tunes for awhile now. Enough is enough

Seriously what? Look it up yourself if you don’t believe me.

There has been QOTSA and Volbeat, the rest has been 90’s and under for some time now.

And it would’ve been a fair point if you had originally whined about 90s and under instead of 70s and under, but in any case I can almost guarantee you it’ll swing back the other way with a few months of mostly modern stuff before the end of the year based on past experience with music game DLC.

Not whining, just voicing my frustration. It’s starting to feel like this game is reaching the end of it’s life cycle

as it’s a 3 pack I really hope boogie wonderland is NOT included! Shining star would be good. I’ll probably get these.

My prediction on this is September (because it’s obvious), shining star (because of rb2) and sing a song (because I love it)

Love! looking forward to this one. Anyone else think the lead singer looks like Morgan on The Walking Dead? LOL!!

LOLOLOLOLOL
Dude you win. There’s Pepsi on my monitor now.
And hey, maybe we’ll get some H2O. XD

But on a serious note, what in the actual f**k is going on with Ted Turner’s moustache?

Wind let one rip and Fire got all the blame.

And let me guess…it shook the Earth.