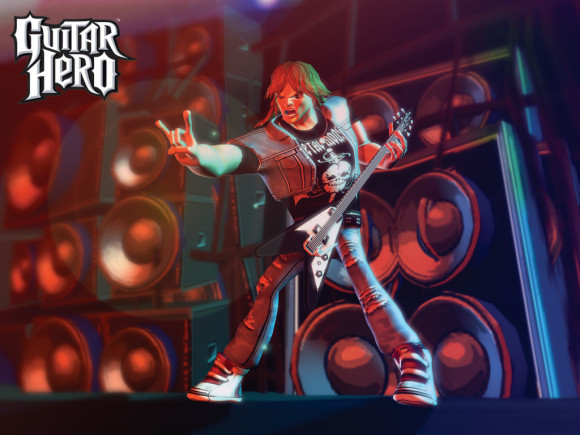 This is where it all began. Sure, rhythm games had been around long before Harmonix and Red Octane stepped in to the ring to deliver the first Guitar Hero, but come November of 2005, the genre would never be the same again.

Kickstarting one of the highest grossing video game franchises ever, the original Guitar Hero featured a fairly small main setlist consisting of 30 cover versions of popular rock songs from the 60s through to the early 00s. In addition, there were another 18 bonus songs that were master recordings of lesser known songs, mostly from in-house Harmonix bands like Freezepop and Honest Bob and the Factory-to-Dealer Incentives. There were also two songs (Trippolette and Graveyard Shift) that were only available through use of a cheat device like the GameShark, although I personally don’t count those as being part of the setlist.

NOTE: While Smoke on the Water is an original recording, the version used in Rocksmith uses an alternate take of the guitar solo.

Guitar Hero had a really spectacular setlist, and while we have a decent amount of it in the game, there’s a bunch we’d love to see in Rocksmith. Here’s the tracks we’d love to see the most:

Black Sabbath are one of the most beloved bands of all time, and this song features a downright iconic riff. While master issues are likely behind this song never reaching later Guitar Hero or Rock Band games, here’s hoping this song makes its way to Rocksmith sooner rather than later.

Fans of Grand Theft Auto: San Andreas may remember this seminal 90s alt-rock track. A live version appeared in Guitar Hero: Smash Hits, although it doesn’t export. Other than that, this song has never re-appeared in a rhythm game. It would certainly be at home rounding off a possible Hit Singles VI…

Quite literally a stellar song, pair this with Drive and A Certain Shade of Green and you’ve got a hell of a second Incubus pack.

Fitting that we get a chance to talk about the original guitar hero in an article about the original Guitar Hero. While this may have seemed like wishful thinking only a couple years ago, following the massive Jimi Hendrix pack we received that was curiously missing this song. Hopefully we’re not too far away from getting more Hendrix in the game!

Joan Jett & the Blackhearts – I Love Rock and Roll

Seriously, we’ve had how many “Rock Hits”, “Hit Singles”, and “Women Who Rock” packs and yet somehow we still don’t have one of the very definitions of “classic rock”? Come on, Rocksmith!

Ozzy Osbourne – Bark at the Moon

The first “final boss” in the series, Bark at the Moon is a rhythm game classic. It appeared again as DLC for Rock Band 3 where it was exclusive to purchasers the Ozzy Osbourne 8-Pack. Hopefully the licensing doesn’t wind up to be prohibitively tricky and we see this song in Rocksmith soon.

To date we’ve only had a cover version and a live version in rhythm games. It’d be great to finally see the original version show up so that we can finally rock out exactly like ZZ Top do!

There’s our picks, what songs would you like to see from Guitar Hero (2005) end up in Rocksmith 2014? Besides Clapton related bands that is…

Seems to me that Ubisoft and rocksmith are behind in the good dlc … I mean for certain without a doubt most of the dlc they put out this year could not have made any money on after paying to use the song.

I hope, someday, somehow, you get banned.

We need someone that knows how to program write a script that will take as input a file containing all the Rock Band and Guitar Hero songs and push it to the RS request app. We can then all use it.

What does that have to do with anything?

Not a single song is bad.

Loved this game back in high school. Had one of the best main setlists of all the GH games. Honestly though, I thought the breakout song of that game was Cheat on the Church by Graveyard BBQ. Loved playing that song so much. Still listen to that band because of this game. I wish Graveyard BBQ would get represented on Rocksmith one day but I doubt it.

Still waiting not so patiently for Ozzy / Sabbath, Ramones, and ZZ Top in general. I would really, really like to get Texas Flood and Spanish Castle Magic. Joan Jett would be nice, but it would be one of the easier songs in the game.

I guess Ubisoft hasn’t detailed why Cream / Clapton weren’t part of the export from RS1. It’d be great to get those back as well as Crossroads.

I’ve not seen anything specific to the Clapton issue regarding the RS1 export, but I do recall Dan Amrich saying in the comments section for the popularly-shared “How a Request Becomes a Song” blog that, when Ubisoft tried to get the licence to allow the export of Cream’s “Sunshine of your Love” from the earlier game, reportedly the licence holder was not interested.

I just realized I never requested any Helmet. Time ot fix that! 😉

All of those are definitely missing from Rocksmith. I know I’ve requested Helmet, Bad Religion, SRV, and Incubus.

Also, I like this column. I’m glad its continuing.

Add to the potential Incubus pack, ‘Pardon Me’ and ‘Nice To Know You’ along with the other Incubus songs mentioned…Insta-buy!!!

ZZ Top, SRV, Black Sabbath, Ozzy, Joan Jett, and Bad Religion. I agree with all of those. Like this feature’