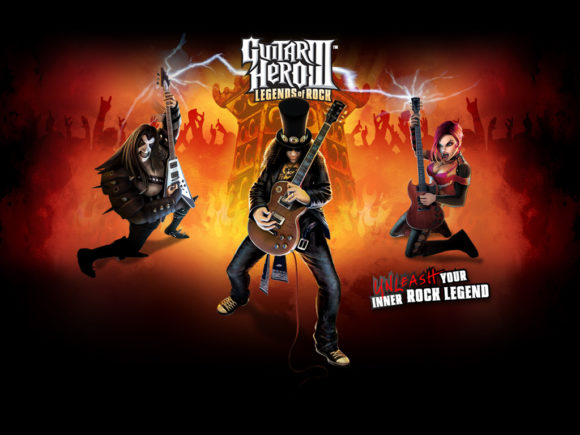 Well, here we are. Arguably the peak of rhythm gaming’s popularity and cultural penetration, Guitar Hero III: Legends of Rock was nothing short of a phenomenon. The first Guitar Hero game not to be made by original developer Harmonix, Guitar Hero III was moved to Activision and Tony Hawk developer Neversoft.

A new feature in Guitar Hero III was the “Guitar Battles” mode, a multiplayer mode where you’d earn “battle gems” that hinder your opponent’s ability to play with the ultimate goal to make them fail out before you do. These were used in career mode as set-pieces with the aforementioned Legends of Rock, which consisted of Rage Against the Machine guitarist Tom Morello and then-former Guns N’ Roses guitarist Slash, as well as a final battle against “Lou”, who is the devil.

For the first time in series history, the setlist was majority master versions of songs. Two of those, Cult of Personality and Anarchy in the U.K., are re-recorded versions from the original artist, and the Talk Dirty to Me cover features vocals by original Poison frontman Bret Michaels, who also appears as a non-playable character in the game. Also in a series first, there is a cover song in the bonus songs section, thanks to She Bangs the Drums.

As for the setlist itself, Guitar Hero III placed a massive emphasis on heavy metal and difficult songs, with a lot of people commenting on how quickly the difficulty ramps up on Expert. Not including the battle songs (vs. Tom Morello, vs. Slash, and The Devil Went Down to Georgia), the total setlist in Guitar Hero III consisted of 70 songs. Of that 70 song setlist, 34 are currently available in Rocksmith 2014, for a grand total of 48% available. That’s the highest percentage we’ve seen to date in Setlist Sunday! In addition, we can increase that percentage to 50% if we factor in Sunshine of Your Love in the original Rocksmith.

Now for the songs we’d like to see in Rocksmith!

There’s a lot of really cool stuff going on with the guitar here (especially if we get the full studio version), but for me the real appeal here is the bass. I know that I’d personally love the chance to play that great droning bassline on a real bass.

Oh, you thought Play with Me was hard? One of the hardest songs in rhythm game history, few songs are as synonymous with the genre as Through the Fire and Flames. And before you think that this wouldn’t work in a game with real guitars, remember that this was available as DLC for Rock Band 3. With Pro-Guitar/Bass. Just imagine how impressive you’d be to your friends if you could bust this one out!

One of the most notable songs from the wave of mid-2000s indie rock, Ruby might not be the most challenging song on guitar, but it’s certainly one that if you bust out at a party, you’ll get people on their feet and singing along. It would definitely be a great one for us to have in our repertoires.

I’m starting to sound like a broken record, but we haven’t seen these guys since Rocksmith 2012 and it makes no sense! I initially thought that they were just waiting until we got bass, but that happened and still no more RHCP. I’m sure the licensing isn’t easy, as we’ve seen with Rock Band, but hopefully we see this song show up in Rocksmith soon!

Talk about iconic riffs. Rock You Like a Hurricane has arguably one of the most well known guitar riffs of all time that would surely be great to have in your repertoire, and to top it all off, there’s a great solo in there as well that’s sure to challenge you as a guitarist! This song just seems perfect for Rocksmith.

Alternative rock at it’s finest. That’s what Sonic Youth are to me. While rhythm games have typically not included too much else from their catalogue, this song is still a great starting point and would provide some very interesting strumming and effects gameplay to the game. If only there was a way to simulate feedback…

There’s our picks, what songs would you like to see from Guitar Hero III: Legends of Rock end up in Rocksmith 2014? Let us know!

The Hellacopters and Backyard Babies. These bands are unknown to most of you and, like their dirty rock peers Turbonegro, would blow the minds of some of you who want high octane shredding and cool tunes.

+1 for Casey’s post. The Fall of Troy and An Endless Sporadic are the 2 I’d most like to see in RS.

Impulse is very, very unlikely though. I’m pretty sure that band was a project from one of the GH developers.

FoT also had a DLC 3 pack somewhere in the GH franchise.

Never say never! We did get a bunch of An Endless Sporadic in Rock Band through RBN, so they’re not GH exclusive anymore.

This game is what made me want to learn guitar.

I always loved The Hellacopters song. One thing I miss is hearing songs from new bands and growing to love them. We need an indie pack or 5!

Honorable Mentions:
Dead Kennedys -- Holiday In Cambodia (I’m listing this so I don’t appear too mainstream ;-p)
Scorpions -- Rock You Like A Hurricane (so cheesy but…)

There is a misrake, you wrote “NAAST -- Mauvail Garçon” instead of “Mauvais Garçon”.

But, I would like to play Stevie Ray Vaughan, Pearl Jam, NAAST and Blue Oyster Cult.

Don’t miss that rake! These leaves aren’t going to pick themselves up, Mister.

Once again waiting for the Alice Cooper 5- pack. honestly it’s sad that even with a 5 pack we’ll only get the popular songs and not the guitar savvy ones. Without even thinking the pack would have to include
School’s Out
I’m Eighteen
Poison
Welcome to My Nightmare
Feed My Frankenstein (or Billion Dollar Babies, it can go either way)
Nothing off of Killer, Constrictor (which features Kane Roberts, without a doubt the best Original Alice Cooper guitarist) or Goes To Hell. Either way that’s my main priority now that Extreme’s out of the way.

The way it ends, really shouldnt cost much to licence and its great song, heard it first time in GH and love it since then

There was some great songs on this game to be sure. Impulse, Even Flow and the Number of the Beast. Despite this, I felt like the brand was getting stale at this point and I realized how much time I had wasted on these games. I had played real guitar for years prior to GH1 and began wondering how good I could have been if I hadn’t played these games. I abandoned GH games fully after this one and committed to real guitar only.

At least the skills I made in these games made me the life of the party when Rock Band eventually came out.

I would love some Red Hot Chili Peppers finally. I don’t have the original rocksmith so I have none. So sad

Maybe with GNR back together, we can finally get Welcome to the Jungle.

The songs I want to see make it to Rocksmith are:

This song introduced me to this band, and I have loved them ever since. They have some phenomenal guitar playing on all of their albums and I have requested a ton of their songs.

Another really hard song from GHIII that also helped me to discover a new really fun band. More instrumental prog is always welcome to me.

I would love to see In Flames come to RS.

Another great band missing from RS. I just requested a bunch of Sonic Youth last week,

This game introduced me to this band and I still really like this album. Great song and really challenging.

There are still a ton of great Pearl Jam songs missing from RS’s library.

This song rocks, and more spanish-language songs would be great.

Another great punk/post-hardcore band that would be more than welcome in RS.

This band rocks and I think they would fit very well in RS.

He’s such an iconic player and with his songs in other music games, I am surprised that he’s not in RS. I wonder what the licensing problem is.

Some In Flames would be nice!