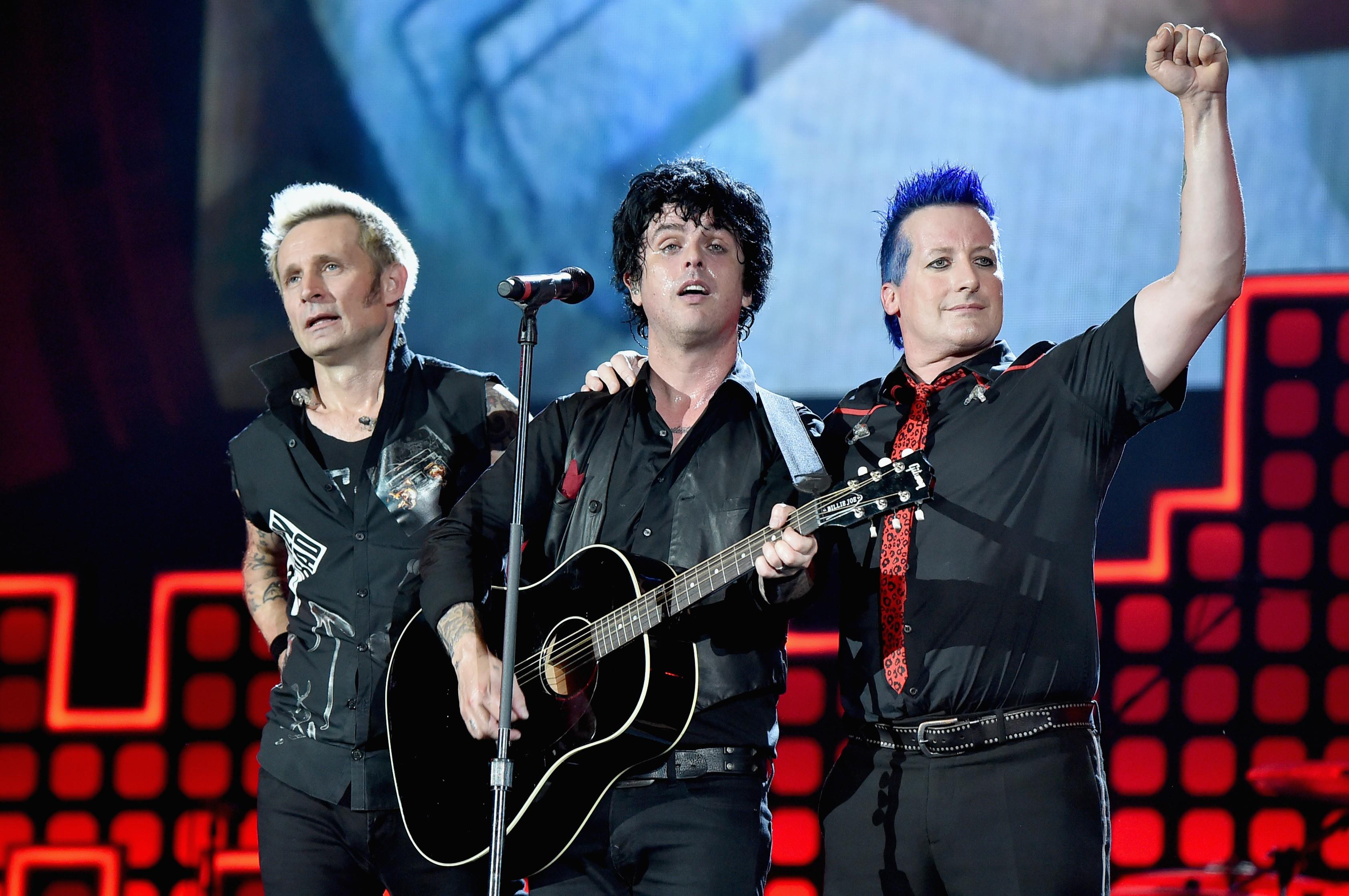 Today’s clue has been posted and solved, and with the reveal we can see that an artist besides Jimi Hendrix will have a FOURTH pack in Rocksmith, bringing their total to 18 songs!

Let’s check out how we got the solve…

Wait, that album comes out today…

This has gotta be it! 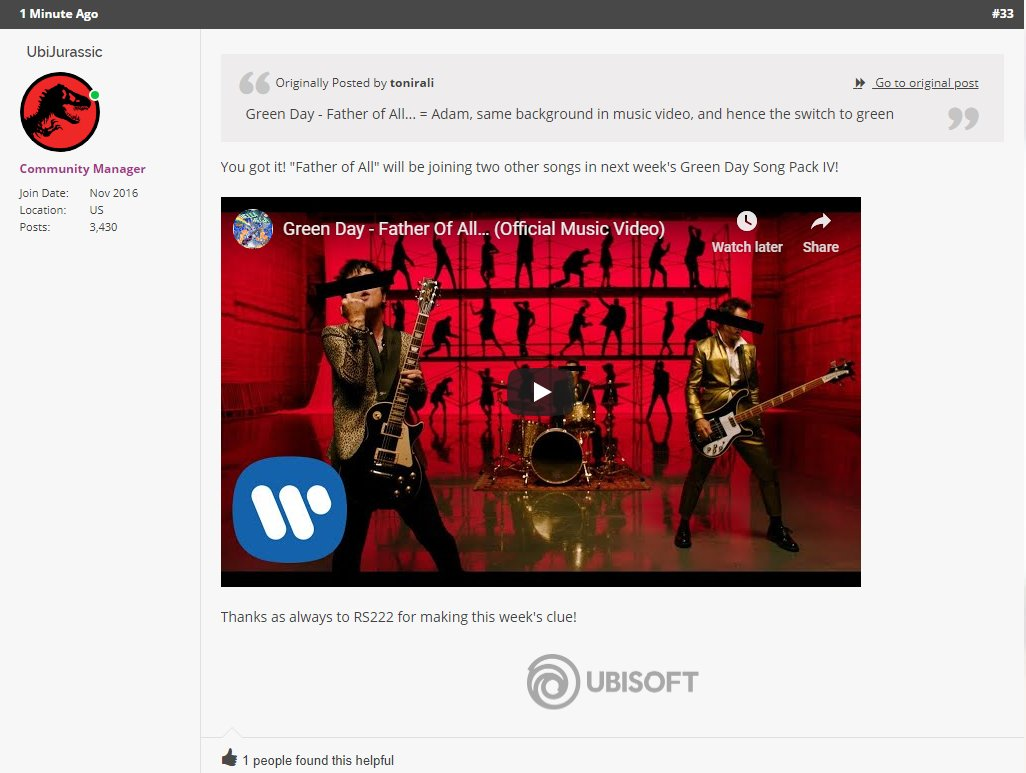 This is the third appearance of Father Of All… In a music game!

What other songs might join Father Of All… in the fourth @GreenDay Song pack?

Could this be a hearty meal?

Are you excited to see Green Day return with another pack, with an album releasing today? Or are you headed to the request app to make sure they add more QUEEN to balance the universe? Let us know!

I'm having trouble trying to sleep. I'm counting sheep but running out. As time ticks by, and still I try. No rest for crosstops in my mind. pic.twitter.com/UuY3aOD1sn

It’s a pass for me but I’m glad they’re revisiting old artists. Maybe one day I’ll get a 3rd Megadeth pack or a 2nd Faith No More pack.

“Surprise! You’re Dead” would be a great choice to me. I love Evidence & Last Cup of Sorrow as well but I would like Superhero just for the inclusion of the newer FNM. A few other great ones would be Ashes to Ashes, King For a Day, Jizzlobber (that guitar), or even their rendition of Midnight Cowboy.

Hm, if we were gonna get a cut from Sol Invictus I think I’d most like Cone of Shame

Lol I love Sunny Side Up, didn’t notice Elliott’s comment earlier. And if it has a video I think it’s close enough. But man I’ll take any FNM. Seriously one of my favorite bands.

Oh no doubt. I’m just being realistic since they tend to pick the singles, I don’t think Cone of Shame was one.

I don’t really know what counts as a single anymore but there was at least a video https://www.youtube.com/watch?v=6Z0k5yiCmFs

Midnight cowboy would be an awesome choice. Love that tune.

Again… See you the next week.

More deserving artists to revisit than GD, I mean it will be fine, maybe a single or two worth picking up but I’m not going to get excited about this

Hard pass for me.

Minority would be nice.

They better add more Pearl Jam dlc when their album releases. I always liked the old green day stuff but the new stuff is so watered down. They need to take longer breaks between albums like Tool. The best part of their dlc is probably bass lines anyway

All the punks I know growing up, got jobs, had kids and became boring. A Bit like me. And Green day were never that edgy or cool in the first place and that ship has long since sailed due to their encroaching dotage.

For me this is another revenue orientated dlc. They picked a popular artist over niche or vintage artists cos they know itll push more units.

I’m not complaining mind, I’m still enjoying pat benatar, great white and gary moore. I love the platform and how its improved my playing, I just wish ubisoft had as much passion left for the project as a lot of the players do.

Not disagreeing with you, or agreeing. I kind of see this a different way. Considering how most of the releases were in 2019, I think Ubisoft did branch out a little. Now they’re going for balance. For me, the majority of last year’s releases were uninteresting. That’s for me though. I’m sure someone who wasn’t getting served with a certain genre, felt a sigh of relief during that year. So when you mention the “niche or vintage” artists Ubisoft has actually gone away from sticking with just the most popular/most requested artists a few times. So far this year seems to show they want to stay on a familiar rhythm, in other words put out that “revenue orientated dlc” for a while. They’re going for the masses. I’m sure I could name a few songs or artists that most folks in this room would hate to see in the game. Here’s a comparison. (Red Hot Mama -- Funkadelic, Edwin Hawkins Singers, Doyle Bramhall II, Kirk Franklin, Cameo, Zapp, Los Lonely Boys, DJ Quik, Satisfy My Soul Babe -- Bob Marley and the Wailers, the Dixie Chicks, A Tribe Called Quest, and Alabama) I can’t imagine many folks in this room having interest in this collection of artist I like. On the flip side, if I mentioned a list like (Rock You Like A Hurricane-Scorpions, Prince, Huey Lewis and the News, Guerilla Radio- RATM, James Brown, more Aerosmith, GnR, the Isley Brothers, RHCP, or Isaac Hayes) the response would be more favorable. (all artists I like as well) This would also clearly be a cash grab move. Based on the responses in here, Ubisoft stepped out a bit from what’s popular too often, and a lot of folks weren’t happy. I think they’re just balancing things out. Got a lot of… Read more »

More good songs would be nice