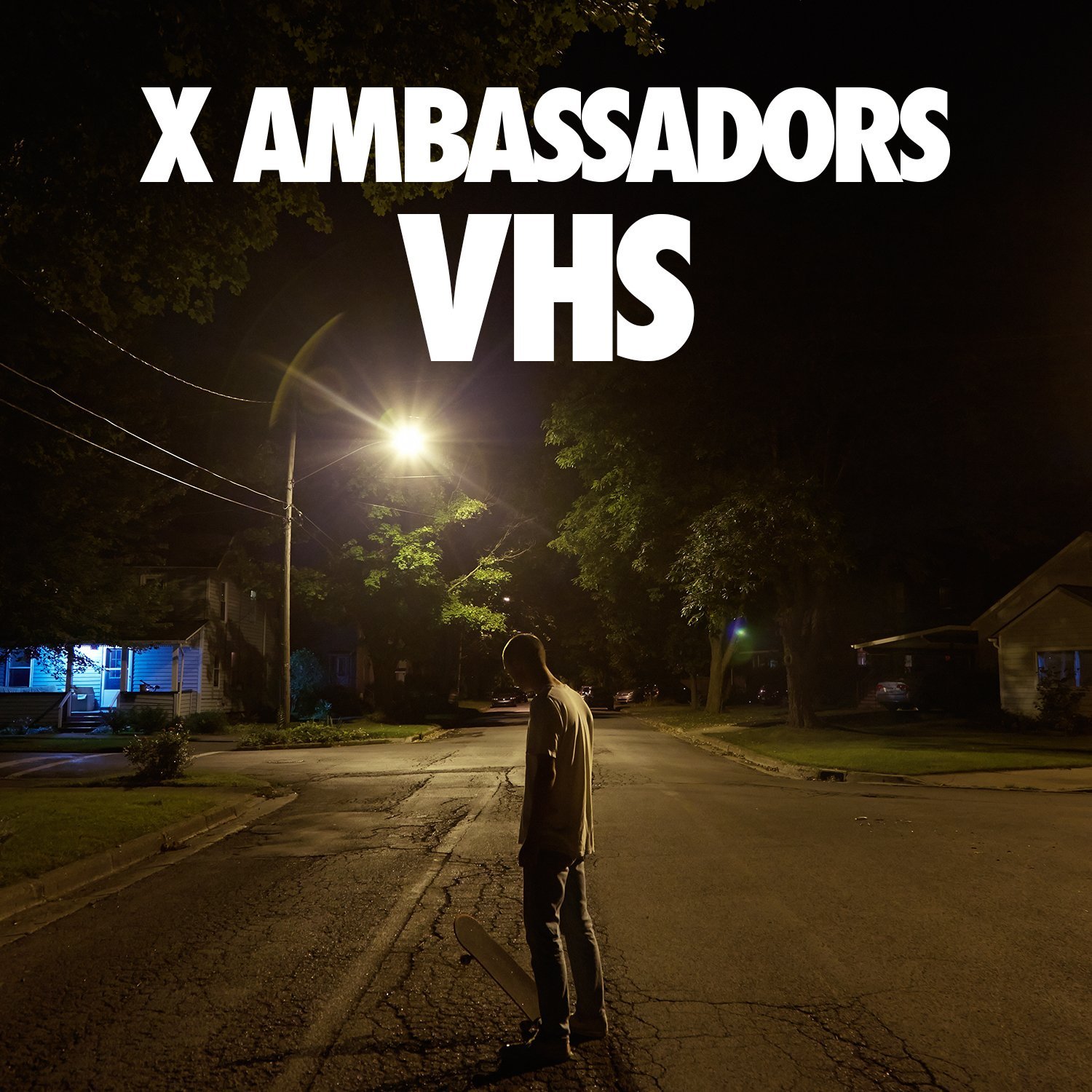 The newsletter was pointing at this but it took a clue from RollingStone222 to confirm this new artist coming to @Rocksmithgame next week! 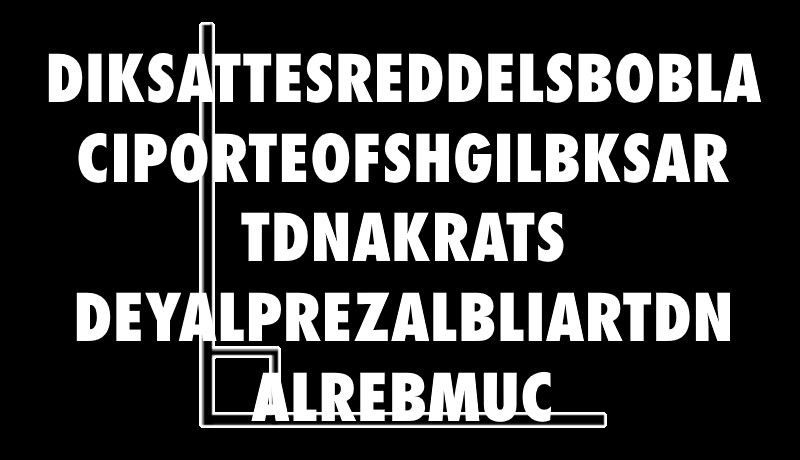 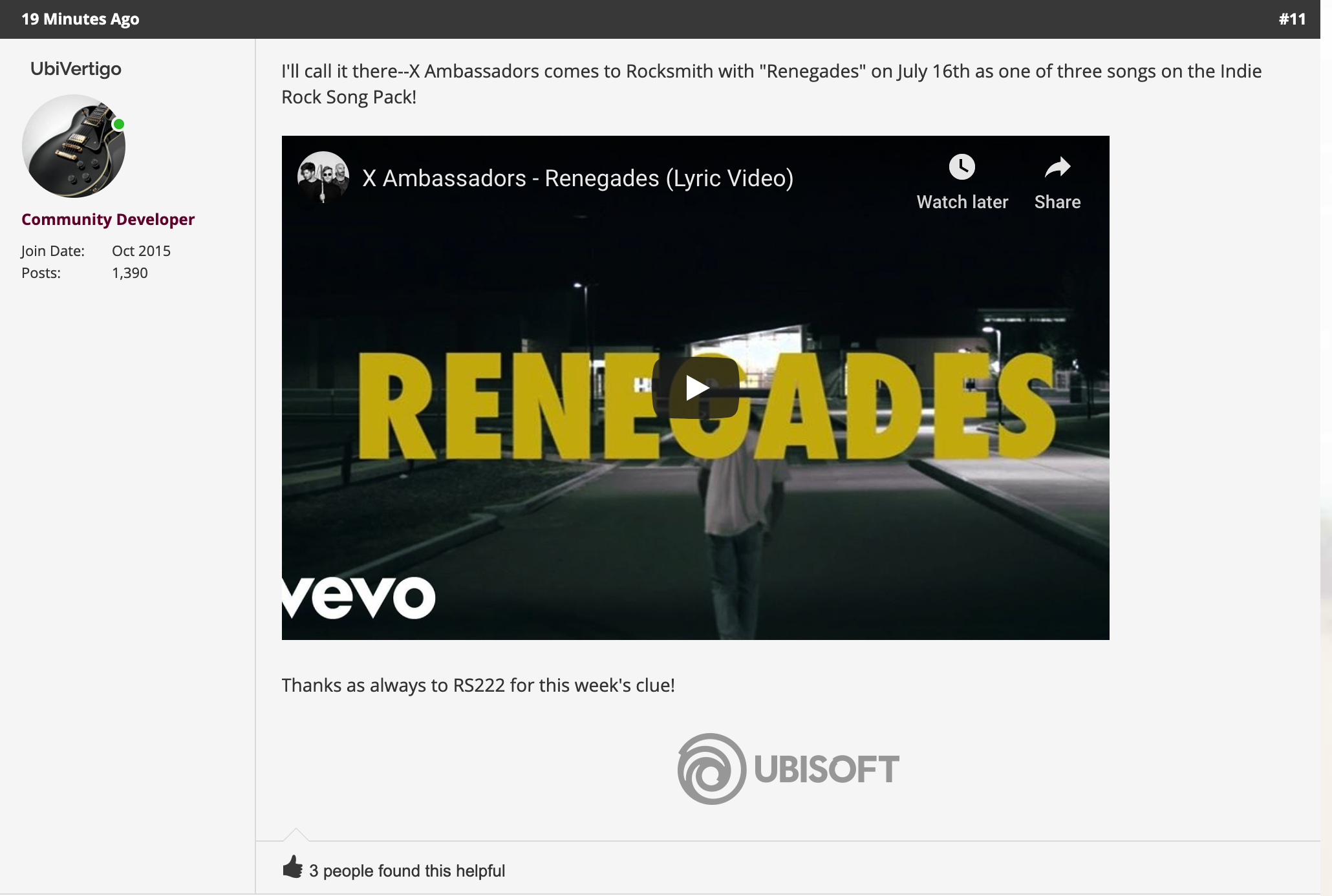 What other bands might join @XAmbassadors in this mix pack?

Would you be happy with just a single? ?

Are you excited for the addition of @XAmbassadors and other Indie Rock singles? Or are you already wondering what’s coming next? Let us know!

Well I definitely am curious about what the other 2 tracks will be, fingers crossed. I know the x ambassadors name more than their stuff. It’s not a bad song but that track basically sounds like a really bland, flat, uninteresting attempt at an RHCP track to me with much weaker lyrics and delivery. Maybe it will grow on me or something. But 2 more tracks really hope something I like pops up.

I know and they aren’t the only ones. Apparently the take is if it’s in a another game it’s easy to get but the whole RHCP BSSM album among other tracks was in a game. There was a whole Metallica game. And aren’t those both on the most requested list? But between the the number of people/bands we have a song (maybe 2) that we don’t have a pack from plus the ones where the best songs are missing (probably the most quoted would be ND’s Just a Girl off the top of my head) it is a little puzzling. Like CCR, RATM, & Audioslave (could’ve picked a bunch more. I’m sure we all could) the track/tracks I’ve heard most people say are their favorite and what I would like the most aren’t here. Those are all on the same labels btw, no switching so that’s not the issue. Can’t say I get it. On the other hand GvF we got 2 packs and every track I’d want were in those. That was perfect we’re good there, let’s move on. Hopefully we get a lot more tracks and packs for a long time or something new comes along to replace it if we don’t. Your family and neighbors probably don’t want you having the band over at 2am in the middle of the week but certainly this works.

RHCP I guess it’s possible they can only license EMI songs.
Arctic Monkeys is’t always surprised me most they haven’t released a pack; didn’t they have an infographic saying R U Mine? was the most played on-disc song?

Mothers milk was either capital or maybe although I don’t think it was the first WB album, but that’s more the thing Ubi could just lay certain things out and just say, things might like, “this label doesn’t want to deal with us but things may change, however these guys over here “ or certain other things so we can know that when we request tracks and bands. We know from what songs we have that we could get certain songs from specific bands/albums but don’t have them. We all probably request things if we’re on here but what if they also emailed something periodically And said we are talking to these bands, here is say the 12 most requested tracks and three blank write in spots and you could pick 5. Not everyone makes the requests but if they sent that out I bet the could get a better look at what people are interested in, engage people more while gathering the info and we’d know a little more about what’s going on and probably have a better shot at getting some of the tracks we want from the bands we like or would want to play. Plus I think they could give us some more info like 10 most popular packs for each year. Top 100 downloaded tracks. Update it. They could ask us questions for info more often as well, we could ignore it but they’re recent presentation where every Ubi game but Rocksmith got mentioned or a preview and what not seems to say a lot about what they think of it and then probably us. It makes them money but they are totally disinterested. I think it’s the only thing that’s worked on out if the SF office, which tells me it is profitable or… Read more »

Bloc Party would be good as hell.

Kula Shaker definitely ! Or better a 3 song pack from them next week, including “Jerry Was There”.

Built to Spill and Rheostatics are my two most wanted indie bands that aren’t in Rocksmith. Wouldn’t mind seeing a deeper cut from Modest Mouse as well now that we have their two biggest hits out of the way.

Kinda hard to narrow it down when you have an entire genre to work with, but here’s a few other songs I’d like to have:

Young Rival -- Got What You Need

How good would this cut be?

There are a ton of bands who could be included in a pack like this. Sonic Youth, Pavement, Arcade Fire, Sufjan Stevens, The Polyphonic Spree, TV On the Radio, !!!, Neon Trees, The Shins, Vampire Weekend, The Von Bondies to name just a fraction of the possibilites. Its almost impossible to predict.

speaking of Polyphonic Spree one of my most wanted artists is St. Vincent

Was kinda joking but still…

Kula Shaker would need a 3 songs pack, including Jerry Was There.

I’ve requested at least Ophelia and their version of Hush, and prob a couple others.